We now come to our concluding essay on this section of this chapter under consideration, to wit, the verses 3-11.

So much for the translation.

It is quite obvious that Paul here emphasizes that what he is teaching, in this refutation of some who teach a different doctrine, is wholly according to the Gospel of God in Christ; it is, therefore, the last word in the matter, and all must bow before this instruction of Paul as it will be passed on by Timothy.

All that Paul has thus taught is in accordance with the Gospel, the glad-tidings of salvation, from the blessed God to a poor and helpless sinner!

We learn from this verse, in general, that the correct starting-point in any matter is to ask: what saith the Gospel! Any teaching which is contrary to this “gospel” is erroneous. For when presently God shall judge even the secrets of men it will be “according to my Gospel.”Romans 2:16. The determining factor of all things is thetruth of the Gospel, and God’s purpose in Christ Jesus, our Lord. That determines the meaning of the “law” in relationship both to, believers and to unbelievers, to those without law and those under law.

Let us keep this in mind.

The following elements in the text call for a little closer study.

In the first place, we should notice the meaning of the term “gospel.” The term literally means: good tidings. It is a tiding from God; it is news which is known and can only be known because it is revealed, uncovered by God with whom it was hid. It is the news concerning the mystery of God’s will, the secret counsel concerning our redemption. It is official communication sent down to us from God’s throne on high. It is wholly God’s, this gospel. It is His glad-tidings. From the viewpoint of the relationship between the New Testament and the Old Testament it may be said that the Gospel is the glad-tidings concerning the fulfillment of the promise of God. This promise concerning the coming of God in the flesh is the theme of the entire Old Testament Scriptures. That is the message of Moses, the Psalms and all the prophets. In a sense this promise was glad-tidings. It was good news in promissory form. In Question 19 of the Heidelberg Catechism we have a very beautiful circumscription of the Gospel from the viewpoint of the giving and of the fulfillment of the promise in the Old Testament. This answer is: “From the Holy Gospel, which God Himself revealed first in paradise; afterwards proclaimed by the holy patriarchs and prophets, and foreshadowed by the sacrifices and other ceremonies of the law; and finally fulfilled it by His well-beloved Son.”

That is the gospel. It is not a pin-pointed story somewhere in a hidden corner in the Old Testament, but it is the grand theme and message in the entire Old Testament Scriptures. Only those who have a covering upon their hearts, a covering of unbelief, fail to see this theme and to hear this glad-tidings upon every page of the Law and the Prophets. Such, when they speak, may confidently affirm their allegations; they are as wrong as they think they are good teachers, and may, therefore, not be condoned in the church of Christ.

Such is the gospel of which Paul here speaks and which he sets forth as being the standard of truth and orthodoxy.

Paul says some wondering things about this Gospel.

As we intimated above, there is, first of all, the truth that the Gospel is the “gospel of the glory of the blessed God.” This should not be translated as though “of the glory” were equivalent to an adjective “glorious.” Paul does not simply mean to characterize this gospel as being “glorious,” but rather he teaches us the source of the gospel. This is a gospel which is rooted in and which is compatible with the divine glory. And this divine glory is the radiance and manifestation of all the virtues of God; it is the manifestation of God’s love and mercy, his longsuffering and goodness, his faithfulness and justice, his power and might, his endless riches of divine greatness in all his virtues. Only the gospel is compatible with this glory of the blessed God. Yes, that makes the gospel “glorious.” However, Paul’s rendering of the text emphatically sets forth that the gospel is rooted in and is the manifestation of this glory of God.

If the Lord has made all things for himself, and if also the law is for God’s sake, then certainly it must be to serve the glory of God. However, the law cannot be to the greater manifestation of the glory of God! That is only true of the gospel. For the law cannot make a sinner alive and comfort him in his poverty. Such God does in the gospel. The gospel speaks of the “glory of God in the saints” and of the “super-abounding greatness of his power to usward who believe” which He wrought in Christ, having raised him from the dead, and set him (Christ) at his own right hand in the heavens, far above all principality and power and might and dominion, and every name that is named, not only in this world, but also in that which is to come!

In close connection with the foregoing observations it should be noticed that this “glory” is the glory of the “blessed” God. The term blessed here in the text is not “eucharistia” (praise-worthy) but rather “makaria,” one who is inwardly content and self-sufficient. God is full of blessedness. Nothing is added to Him. He is the Fountain of all good and is the God of our salvation. He is the “I Am that I Am”; yesterday, today and forever the same, the Lord, God Almighty. Salvation as proclaimed in the gospel is from Him and from Him alone. Out of Him, and through Him, and unto Him are all things; to Him be the praise and the glory forever, Amen!

The manifestation of this “blessedness” is God’s prerogative.

This is His glory; He gives it to none other.

Now the gospel is compatible with this glory and blessedness of God. Let “certain” men therefore be silent if they cannot teach this gospel, and the lawful use of the law as a consequence. If anyone teach another teaching, a different gospel, which Paul has not taught, though he be an angel from heaven, let his be accursed! Gal. 1:8. And again I say, if anyone teach a gospel which is not in accordance with the “‘gospel of the glory of the blessed God” let him be anathema!

God will have no strange fire upon his altar.

If anyone shall add to the words of this gospel, God shall plague him according to this gospel of the glory of the blessed God!

Of this reality Paul is deeply conscious.

For this gospel is not an indifferent thing to Paul. Rather the gospel is a sacred “trust” for him. God has committed it to his care! God has counted him faithful. It is looked for in a servant to be found faithful. He will keep this gospel willingly. He, does not simply desire a stewardship but rather a reward of a faithful steward. And, therefore, he rises to the defense of so great a gospel of glory.

The phrase here employed in the Greek by Paul is a peculiar one as to construction. Paul employs this phrase repeatedly when he would express the reality of this divinely given “trust,” the gospel.

In Romans 3:2, where Paul speaks of the advantage of the Jew, he singles out the chief advantage, namely, that to them were entrusted the divine oracles; the Jews were the custodians of the word of God. Sad to say, the very word entrusted to them they often did not understand: they often failed to read the “gospel,” the glad-tidings of good things. But it was a sacred “trust” nonetheless.

Thus also in Gal. 2:7 Paul informs the readers that Peter, James and John recognized that God had “entrusted” him with the gospel of the uncircumcision even as Peter had been entrusted with the gospel of the circumcision. And this fact of God’s having “entrusted” Paul with such a ministry placed him on equal footing and equal rank with the apostles of repute, as a bona fide apostle.

Once more Paul tells the readers of Thessalonica that, when he had been in their midst, he had spoken unto them the gospel not to please men, but God himself, whereas he had been “approved of God to be entrusted with the gospel.”

And, finally, we would call your attention to what we read in I Cor. 9:17 from Paul’s pen, where, speaking of his attitude toward his stewardship in the gospel, he says: “For if I do this of mine own will, I have a reward: but if not of mine own will, I have a stewardship entrusted to me.” And this “trust,” this stewardship, is something of which Paul must give account in that day when God shall judge the world in righteousness.

It is, therefore, well to take particular notice of this fact that Paul brings this “having been entrusted with the gospel” forward as the motive of his speaking to Timothy as he does concerning some who teach a different doctrine. He must keep the “charge” thus given him.

For only thus will the gospel of the glory of the blessed God come to its own!

Let all who disobey this command be anathema! 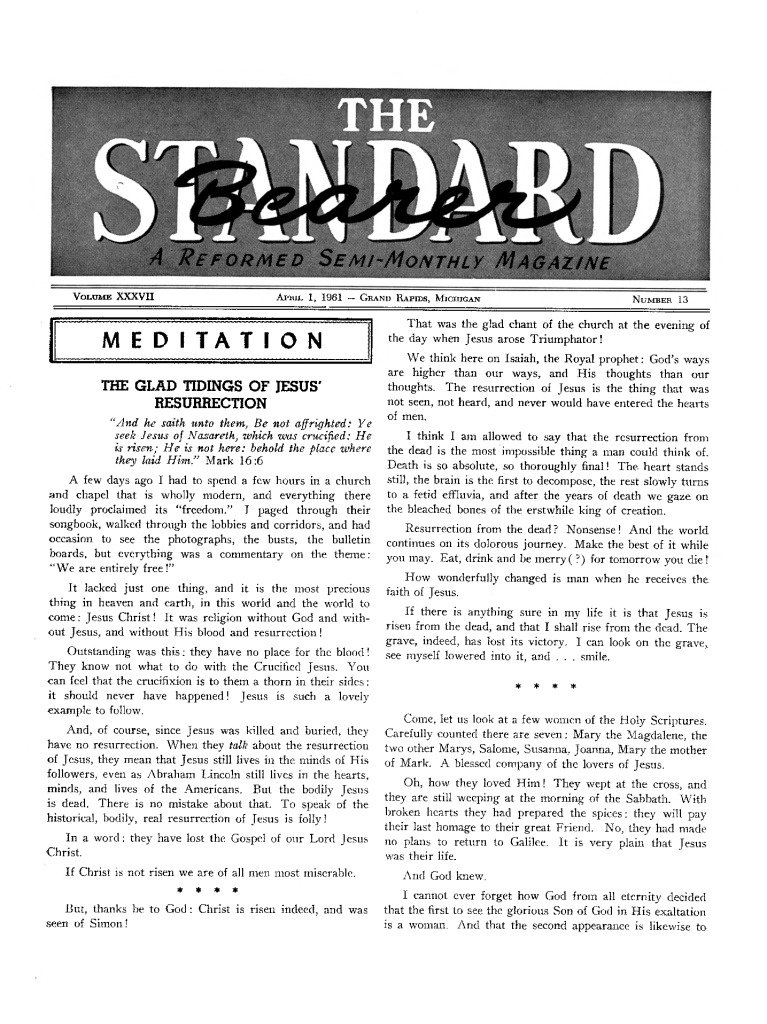