We now come to Paul’s concluding exhortation in this section to Timothy. He will bind this exhortation to command “some” not to teach a different doctrine upon the heart of son, Timothy. There is extreme urgency in this word of the Apostle.

Let us listen to it.

The text itself reads as follows: “This charge I commit unto thee, son Timothy, according to the prophecies which went before on thee, that by them thou mightest war a good warfare, holding faith and a good conscience; which some having put away concerning faith have made shipwreck: of whom is Hynienaeus and Alexander: whom I have delivered unto Satan, that they may learn not to blaspheme.”

It is noteworthy that Paul calls Timothy here a “son.” In verse 2 of this chapter he calls him “my own son in the faith,” and in II Tim. 2:2 he calls him his “dearly beloved son.” This, of course, refers to spiritual sonship of a teacher and pupil relationship. Paul is here speaking to an evangelist in his capacity of Apostle of Christ. In it we see at once also the relationship of Timothy as being under the apostolic authority of Paul. Paul and Timothy are not equals in office as are minister’s in the church of Christ today as expressly “stipulated” in Article 84 of the Church Order: No Minister shall lord it over other Ministers, no Elder or Deacon over other Elders and Deacons! Timothy must give heed to him who is an apostle of Jesus Christ by the commandment of God our Savior, and Lord Jesus Christ!

Hence, the “charge” which Timothy receives from Paul is an official mandate. Paul gives his “this commandment” as a “charge.” The term “charge committed” we should not overlook. It is really a term taken from the banking world. It means that Timothy is to regard it as a sacred “trust.” He must keep it; none may take it from him. To it he must be faithful at all costs. It reminds us of the solemn word Paul recorded in II Tim. 4:1-3, where we read: “I charge thee therefore before God, and the Lord Jesus Christ, who shall judge the quick and the dead at his appearing and kingdom: Preach the word ; be instant in season, out of season: reprove, rebuke, exhort with all longsuffering and doctrine. For the time will come when they will not endure sound doctrine; but after their own lusts shall they heap to themselves teachers having itching ears; and they shall turn their ears from the truth, and shall be turned to fables. But watch thou in all things, endure afflictions, do the work of an evangelist, make full proof of thy ministry.”

This is, indeed, a most solemn word of the apostle whereby he binds upon the heart of Timothy his bounden duty.

And the “trust” committed to Timothy is that he preach the word of the Cross, that Christ Jesus came into the world to save sinners. He must preach the sovereignly free grace and mercy of God. This grace and mercy were exemplified in Paul in the highest degree.

To underscore the urgency of it Paul reminds Timothy of the time of his entrance into the ministry as an evangelist. Says he, “according to, the prophecies which went before on thee.” The construction here in the Greek is peculiarly Greek. The preposition “on (epiin Greek) thee” is that employed to express that “which one refers to in writing or speaks of” (Thayer). Thus inMark 9:12 Jesus says: “. . . and how it is written of the Son, (epi) that he must suffer many things and be set at nought.” Also in Romans 4:9 we read: “Cometh this blessedness upon the circumcision only or also upon the uncircumcision?’ The point is that the blessedness of Abraham and of David in the forgiveness of sins is concerning (epi) the heirs. See also Heb. 7:13. Thus also here in this phrase under consideration in I Timothy 1:18. They are the prophecies which were spoken concerning Timothy. And they were spoken to and concerning Timothy in the past, at the very beginning of Timothy’s ministry. No doubt at the occasion of the laying on of hands, at Timothy’s ordination such words of instruction, direction and prediction of hope in Timothy were uttered. Paul has not forgotten the occasion. Nor, for that matter, may Timothy ever forget. He must perform his vows and make full proof of his ministry.

Timothy must conduct himself as a “man of God.” Such he is called in I Tim. 6:12. There we read: “But thou, O man of God, flee these things; and follow after righteousness, godliness, faith, love, patience, meekness. Fight the good fight of faith, lay hold on eternal life, whereunto thou art called, and hast professed a good profession before many witnesses. I give thee charge in the sight of God, who quickeneth all things, and before Jesus Christ . . . that thou keep this commandment without spot, unrebukable, until the appearing of our Lord Jesus Christ . . .”

Paul here moves in the climate of Jude 1:3 where we read: “Beloved, when I gave all diligence to, write unto you of the common salvation, it was needful to write unto you, and exhort you that ye should contend for the faith which was once delivered unto the saints.”

Only when Timothy adheres to his “charge” which is “entrusted” to him from Paul will he be able to make full proof of his ministry. Wherefore Paul, taking cognizance of this fact, writes Timothy as he does, in order that Timothy may fight a good warfare. Emphatically Timothy must fight such a warfare “by them.” Of course Paul refers to the entrusted commandment, the words of the Cross in all their implication.

It is imperative to notice that Paul speaks to Timothy of a “warfare” which must be waged. Paul knows nothing of this willy-nilly attitude of the enemies of the Cross, who, under the false pretense of being lovers of peace and of the truth, will not break a lance for the truth. There are such. They are the tolerant people. They are not narrow minded; broadmindedness is their slogan. In the meantime they actually tolerate everything but the truth. Enemies of the Cross of Christ they are. They do not want a battle, for in this battle they will be slain by the Word, the sword of the Spirit. On the contrary, Paul tells Timothy to use the Word as the sword of the Spirit. He is called to the colors. He must deck himself not simply with a parading uniform, but he must have his arsenal full of the implements of the spiritual warfare.

Well then, “son Timothy,” be prepared unto the warfare. Let not “some” get by by teaching a different doctrine in the name of true doctrine. And every son, Timothy, in the church of Jesus Christ, even in this very hour, maintain. what the fathers confess in Question and Answer 85 of the Heidelberg Catechism, which Answer reads: “Thus when according to the command of Christ, those who under the name of Christians, maintain doctrines or practices inconsistent therewith, (so unter dem christlichen Namen unchristliche Lehre oder Wandet fiihren), and will not, after having often been brotherly admonished, renounce their errors and wicked course of life, are complained of to the church; and if they despise their admonition are by them forbidden the use of the Sacraments; whereby they are excluded from the Christian church, and by God himself from the kingdom of Christ . . .” Such is the spiritual warfare of the Church!

Only thus in the warfare will one “have” the “faith” and a “good conscience”!

Now it should be evident that when Paul speaks here of the “faith” he is speaking not merely of faith in a subjective sense. He also refers to the faith as to the body of truth which is believed.

It is very well possible to have the “faith” in the sense of the body of truth and not walk in godliness. However, it is not possible to walk in godliness and in a good conscience and deny the “faith.” For what we confess in the “Twelve Articles of Faith” are necessary for a Christian to believe. These are briefly all that God has promised us in the holy gospel.

Such is the faith. When once any article of these is denied it is no longer possible to walk in a good conscience and fight a good, that is, honorable warfare. Hence, buy the truth and sell it not. Only thus too will a man have a good conscience.

There is an interesting question in the Heidelberg Catechism. It is this: “But why art thou called a Christian?” And in the answer we read the following noteworthy words: “. . . . and also that with a free and good conscience I may fight against sin and Satan in this life; and afterwards reign with him eternally over all creatures.”

This answer is indeed significant. However, when Paul here speaks to Timothy about maintaining a “good conscience” he is referring not simply to Timothy’s good conscience as a believer, but, I believe, first of all to Timothy’s having a good conscience as a preacher. Paul refers to this in Acts 23:1, where Luke records the incident of Paul’s addressing the Jewish leaders in Jerusalem. Says Paul, “earnestly beholding the council, Men and brethren, I have lived in a good conscience before God until this day.” It ought to be quite evident that Paul here does not boast in a sinless life. He is too conscious that “he is sold under sin” and that the “good that he would do that he does not do; but that the evil that he would not do, that he does.” See Rom. 7, Fact is, that Paul is speaking of his “good conscience” which is his having renounced Jewry and all its legalism and self-righteousness for the great task of serving Christ in the ministry. Herein he has been faithful. He has walked in a good conscience in all his labors as Apostle of Jesus Christ. He has saved himself and those who heard him.

Thus it ought also to be with Timothy. He must keep the “trust” committed to him. And he must make progress in so doing. This Paul admonished him in I Timothy 3:13-16: “Till I come, give attendance to reading, to exhortation to doctrine. Neglect not that gift that is in thee by prophecy, with the laying on of the hands of the presbytery. Meditate upon these things; give thyself wholly to them; that thy profiting may appear to all. Take heed unto thyself, and unto doctrine; continue in them: for in doing this thou shalt both save thyself, and them that hear thee.”

To drive home this point he cites by way of contrast what happened to some, and, particularly, to Hymenaeus and Alexander. Timothy must learn and become wise from what happens to those who “cast away” this word of the Gospel.

D.V., we shall try to discuss that matter in a following contribution on this section from Scripture. 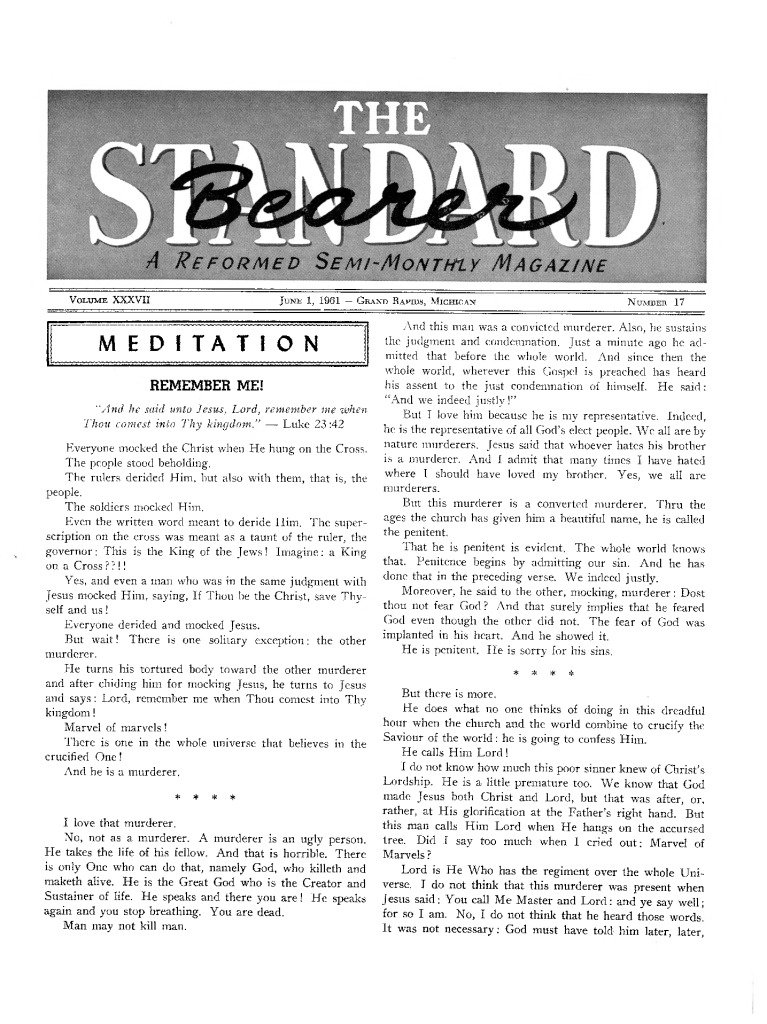