Exposition of I Corinthians 15:20

The significant passage in I Corinthians 15:20 reads as follows: “But now Christ is risen out of the death, the first fruits of them that sleep.

This passage is more than a matter of fact state­ment; it is rather a shout of joyful exultation over against all, who doubt or deny the hope of the resur­rection of the dead in the last day. Such there were in the congregation of Corinth. Says Paul in verse 12 “Now if Christ be preached, that He was raised from out of the dead, how say some among you that there is no resurrection from the dead?”

How come that these men denied the resurrection of the dead?

All denial of the resurrection is simply unbelief; it is an emptying out of the content of the gospel, making faith empty and the preaching contentless; then the preacher is a liar who preaches the resurrec­tion, and we are yet in our sins! Of all men the be­lievers are the most miserable, if Christ be not raised. Then we could better live according to the dictum and philosophy of the world: let us eat, drink and be mer­ry, for tomorrow we die!

But, thanks be to God, such is not, the case!

“For Christ arose from the dead and became the first fruits of them that sleep.”

Certain it is that the resurrection of all the saints is sure, since Christ has arisen from the dead. It is a blessed fact.

Let us try to understand its implication as taught us in this text.

Christ is the “first fruit of those fallen asleep”. What is the meaning of the term: Those that sleep?

The term itself is quite a prevalent one in holy writ. Jesus says to His disciples in John 11:11, “Our friend Lazarus is fallen asleep; but I go that I may awake him out of sleep”. In Matthew 27:52b, “and many of the bodies of the saints that had fallen asleep were raised…” Paul employs the term in that his­toric sermon in Antioch of Pisidia, as recorded in Acts 13:36, where, speaking of the death of David, he says, “For David, after he had in his own genera­tion served the council of God, fell asleep, and was laid unto his fathers…” And, again, Paul uses this term in I Thes. 4:13, 14. Here we read: “But we would not have you ignorant, brethren, concerning them that fall asleep; that ye sorrow not, even as the rest, who have no hope. For we believe that Jesus died and rose again, even so them that are fallen asleep in Jesus will God bring with him.”

In all of these passages the term “fallen asleep” refers to the departed saints, who have trusted in God, served the counsel of God in their generation, have run the race and kept the faith. The term does not seem to refer in ‘Scripture to those, who die outside of Christ. Furthermore, the term seems to imply, that, those who have fallen asleep, have entered into the Lord’s rest. They no longer are in the battle fray. They rest from their labors in the Lord. These labors were not in vain. They have entered into their long looked-for reward. Then, too, the term “fallen asleep” does not refer to the state of unconsciousness between the death and resurrection of the saints, but it refers to their no longer participating in the present life in God’s Church on earth. Just as a sleeping man is ob­livious to his surroundings, so also the dead.

So much for the term “fallen asleep” in general.

But what is the meaning of the term in our text in the phrase “first fruits of those fallen asleep”?

We believe that also in this phrase those fallen asleep are none else and none more than the believers in Christ, who died in the Lord. In the first place, because thus it is literally stated by Paul in the con­text. In verse 18 Paul writes, speaking of the awful consequences of the denial of the resurrection truth, “then they also that are fallen asleep in Christ have perished.” Thus the context. Let it be remembered. Secondly, because in the phrase, under consideration, the original Greek employs the definite article. (toon kekoimeemnoon). The function of the Article is to point out a class of men or things from other things. Here it designates the class of men, who are in the Lord, and who are asleep in Him.

The viewpoint here in I Corinthians 15 is that of the blessed resurrection throughout. It would, indeed, be strange, if the concern of Paul were not with the bless­ed ones, who have fallen asleep in Christ, but with the dead in general!

Christ is indeed the first fruits of those who have died in Him.

This brings us to another element in the text.

Concerning the term “first fruits” in general, we can say, that it refers to the first ripe fruits of the land, whether in its natural state or whether prepared by the hands of man, and that it was holy to the Lord. It was representative and a pledge of the full harvest. The element that it was first in the order of time was not on the foreground. Rather that it was the chief fruit is implied in the idea of first fruits. The Hebrew term “reeshith” (beginning) also is very expressive. It is the term for first fruits. In Genesis 1:1 we read: “In the beginning God created heaven and earth. The beginning is the “head”, the source of things. The beginning is determinative. In the “beginning” God created heaven and earth. Here we have the perspec­tives of all of history laid open before our eyes. God made all things in view of the heavenly. The “begin­ning” is chief. In like manner we read in Genesis 10:10 of the “beginning” of Nimrod’s kingdom. This kingdom was in its beginning, “Babel, and Erech, and Accad, and Calneh in the land of Shinar”. That was its beginning, its moving principle and its fundament­al pattern. Then we have the term used in the well- known passage of Proverbs 8:22. Here we read, “Jehovah possessed me in the beginning of his way, (reeshith dareko) before His works of old.” Here beginning is evidently more than first in order of time. Wisdom here spoken of in Proverbs 8 is, no doubt, the same as the Logos in the prologue of John’s gos­pel. It is the personal wisdom. Him God possessed in the beginning of His way. And this way is God’s way throughout history, from Alpha to Omega. And with a view to the Logos to come into the flesh all things in God’s counsel stands, and history is execut­ed. The “beginning” is here the equivalent of the truth, that, when God laid down the foundations of the earth, the all-important fact God has in mind is the manifestation of His Son in the flesh, in His death and resurrection.

Thus it is also in the use of the term “first fruits” in our text.

For notice that “Christ” is the first fruits. This means that the Son of God is the anointed servant of God, appointed and qualified by God to be His chief prophet, only high priest and eternal king. Of Him God says in Psalm 2, “Thou art my Son, this day have I begotten Thee, ask of me and I will give the heathen for Thine inheritance.” For Christ is the first fruits of them that have fallen asleep according to the ap­pointment of God from eternity.

It is exactly in the resurrection of Christ that we see the idea of the first fruits of the full harvest. He is the first fruits of them that have fallen asleep. This does not merely imply that Christ is the first man to come forth out of the grave. When He arises from the dead there is not simply so many dead minus one. Christ is not simply one dead man next to other dead men. For He is Christ. He is the last Adam. He represents all, who have fallen asleep in Him. And, hence, when He rises all are made alive in Him. Just as in Adam all died, so all, who fall asleep in the Lord, shall also rise in Him. In this sense He is the first fruits. He is the pledge and guarantee of the full harvest. His resurrection is principally the resur­rection of the entire church.

That such is the case is evident, first of all, from the reasoning of Paul in the foregoing verses. There Paul reasons from the effect to the cause. Says he: if there be no resurrection, then is not Christ risen. If there is no water then there is also no fountain. But now the fountain is open, the water is certain. For God hath opened a Fountain in Israel; the waters of the resurrection of all the saints is certain.

And, therefore, we can joyfully say over against all the enemies of the Cross and the resurrection: But now Christ is risen from the dead, the first fruits of them that sleep. And, again, we say with Job: “But as for me I know that my Redeemer liveth, And at last he will stand up upon the earth. And after my skin hath thus been destroyed, yet from my flesh shall I see God.”

So then, my beloved brethren, be ye steadfast, unmovable, always abounding in the work of the Lord, in as much as ye know that your labors are not vain in the Lord! 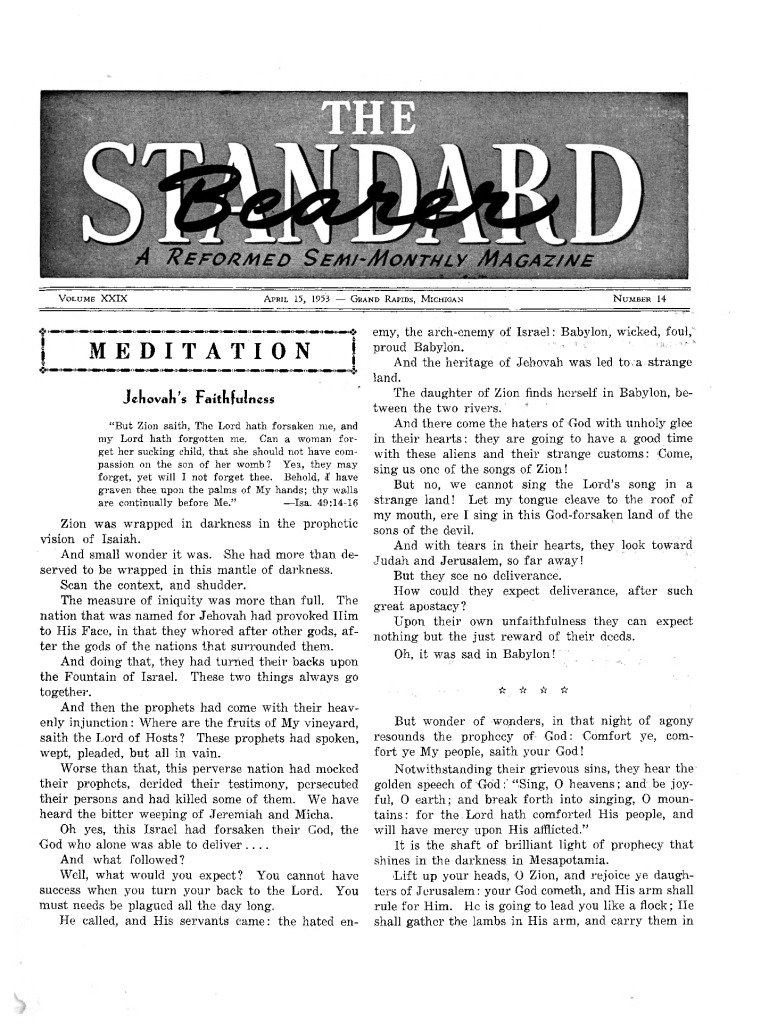