We now come to the discussion of the particular elements taught by Paul in this passage concerning the manner of the resurrection from the dead.

One aspect of the lesson concerning the resurrection of the dead that was noticed is that every plant in creation lives only because in a certain sense it has died. Jesus points out this lesson concerning his own death and resurrection in John 12:24-26 where he says: “Verily, verily, I say unto you, except a grain of wheat fall into the earth and it die, it abideth by itself alone, but if it die it beareth much fruit.”

Such was the truth which Paul enunciates here when he says, “Thou fool, that which thou sowest is not quickened except it die.” That is the lesson concerning the resurrection of the dead and the transformation of all things as increated into every plant that groweth upon the face of all the earth. It is a universal law. The truth of the resurrection stares one in the face on every hand!

However, the text teaches us more!

Paul also teaches us three elements concerning this trans­formation through the death of that which is sowed, be it wheat or some other grain.

The first element is that what is sown is not the body that shall be. It is merely bare grain that is sown. Now this grain may be wheat or some other grain. This is true of whatever is sown. It is ever simply bare grain. Nothing more. The body which shall be comes to manifestation and comes forth from this bare grain through its dying. And unless it die there shall not be a transformation into the body which shall be!

Now this we ought to underscore just a bit. If one leaves wheat in the bin in the granary it simply remains as it is. It may eventually perish, But shall it continue to live and remain living wheat then it must be sown, and thus it will die in order to live. This is what any farmer knows. He knows that if seed grows too old it will simply be left alone and perish. It will be good for nothing finally. But if it be sown and die then it is transformed into a new organism and lives and bears much fruit.

Thus also the resurrection of the body. The body must die. Flesh and blood cannot inherit the kingdom of heaven.

Hence, a transformation is imperative. A change must come! But shall this come to pass then the present body must die and be made alive. This does not mean that the same form shall return. No, the body shall be made alive. All death shall be destroyed in it. But it must die in order to live. The grave is necessary. It is not a necessary evil. We do not return from the dead but we pass through death! And this is necessary.

This is the simple yet tremendously profound lesson which we can learn in our own garden, if only we have eyes to see it. True, this is something which we can only see now that the Word has become flesh and dwelt among us. He suffered and died! And he pointed out to us this central fact of his labors, bringing forth as a good scribe things old and new from the treasures of the kingdom. Take notice of this, dear reader! Observe this mighty fact with believing eyes!

The second element to which we here call attention is one upon which we have reflected somewhat in our former essay. It is the fact, that in this transformation, whether this be in the plant world of creation, or whether this be in the final resurrection of the saints, or the final renewal of all things, is not simply a matter of natural process, but that it is most eminently an act of God’s will!

In all of its transformation it is nothing but what God gives it. It is quite evident that the text does not merely state that God works it, brings it about, but that emphasis is placed upon the fact that whatever the plant receives is God’s particular gift to it. That is true of every plant. The thing made cannot ever say to its Maker, why hast thou made me thus? It is God’s sovereignly determined gift to each plant, each creature! And that should be the rock-bottom comfort for us, his children, when we think of this our present body in the light of the hope of being clothed upon from above.

Thus also is the resurrection body. Our present body which we received from our mother’s womb is a gift of God. It is as he willed it. It is the body which is ours and which shall remain ours to eternity—just as is the case with our soul. The body is not merely something temporary and transient. It is a part of our very nature. And when presently we receive the resurrection body it will be simply as God willed it. It is not a mere process of nature, but it is an efficacious, recreative act of God.

That too is the end of all contradiction to faith. For if it is an act of the sovereign God who raises the dead to live and calls the things that are not as if they were, then the skeptic is as he is because he will not believe in God. The articles of faith concerning the resurrection of the body is faith in God the Father, and in God the Son, and in God the Holy Spirit. He who denies that God is the creator, who upholds and rules all things by His counsel and providence, must needs deny that this same God gives a body to each creature as He wills, and that He will give to each man a body in the resurrection as he wills!

The third element to which Paul calls attention is that God gives to “every seed his own body.”

Paul does not here speak of the “plant,” but of the “seeds.” He makes the seed the point of comparison. It is the point of the sowing which counts here. The body is sown. Hence, it is like seed entrusted to the ground. It is not Christian to try to preserve this body as did the Egyp­tians. We need not attempt to keep it above the ground. Nor is it Christian to destroy the body by fire as men do by modern cremation! Neither one reckons with the reality that the body is sown! They deny that the body is seed. The one denies it by trying to keep the body from corruption, and the other goes to the other extreme by wholly denying the value of the body. Here the extremes meet as is so often the case!

However, Paul insists that the body that is sown is seed. It is not to be neglected. A Christian burial is sowing of the dead! It is as much seed as is any plant. It is possibly seed in a far higher and loftier sense. For when once this seed has died and brings forth its own body by God’s almighty, recreative act, then the final harvest has come. That is the end. It will never be sown again. It will never die again. It is not merely the picture. It is the reality.

And each seed receives its own body.

First of all this is true of the seeds of the plants in the whole order of vegetation. On the third day of creation God made the plants. Thus we read in Genesis 1:11 as follows: “And God said, let the earth bring forth grass, herbs yield­ing seed, and fruit-trees bearing fruit after their kind, wherein is the seed thereof upon the earth; and it was so.” Hence, there is not a transition from the one plant to the other. Oats does not become wheat through its sowing. A tulip bulb does not bring forth a gladiolus flower. Grapes cannot be gotten from a bramble bush. Everything is after its kind. That is because God has so determined it and so maintains it. He gives each plant its own body. It has its own body in the sense that it belongs peculiarly to that plant. The blade, the stem and the ear all belong peculiarly to each plant. Fact is, that such is its distinguishing character.

Thus it is also in the resurrection of the dead.

Each person will then receive from God his own body.

The question may be raised here: just what belongs to the body. This question is especially to the point in view of the fact that physiologists inform us that the body of each person is wholly replaced every seven years by the process of breaking down of cells and tissues and their being re­placed by others and new ones. Hence, the question is: what is the body?

We believe that the body, the “soma” is more than what can be touched and handled. It is not to be identified with flesh and blood. Possibly it is best to state that it seems quite in harmony with the teaching of holy writ that the body of man is composed of the following elements. In the first place the body of man is material. It is made of a certain sub­stance. It is not immaterial. This must be true of the body whether this be in earthy form or whether it be in the form of the heavenly. Secondly, the body of man has a certain form. God formed man out of the dust of the earth. Thus we read in verse 49: “And as we have borne the image of the earthy, we shall also bear the image of the heavenly.” Thirdly, we should remember that everybody is, as respects man, personal. There is personality written in the body of man. He is created after the image of God, and this is some­how reflected in eyes and ears, nose and mouth, in hands and feet! Every person is such that he is a personality in body as well as in soul.

Now we do not believe that the “own body” means that every particle of dust is gathered by God into the same body. Yet, we believe that God will bring forth the self-same body from the grave in that day.

He will give to every seed his own body.

Since the body is more than a temporary prison house, a transitory abode, we believe that God will bring back our bodies from the grave. They have been redeemed by Christ as well as our souls. It is our only comfort in life and in death, that we are not our own, but that we belong to our faithful Savior, Jesus Christ.

And to all who deny this hope of the resurrection, claim­ing that it is irrational and contrary to all sound understand­ing, we say with Paul: “Thou foolish one, that which thou sowest is not quickened except it die.” 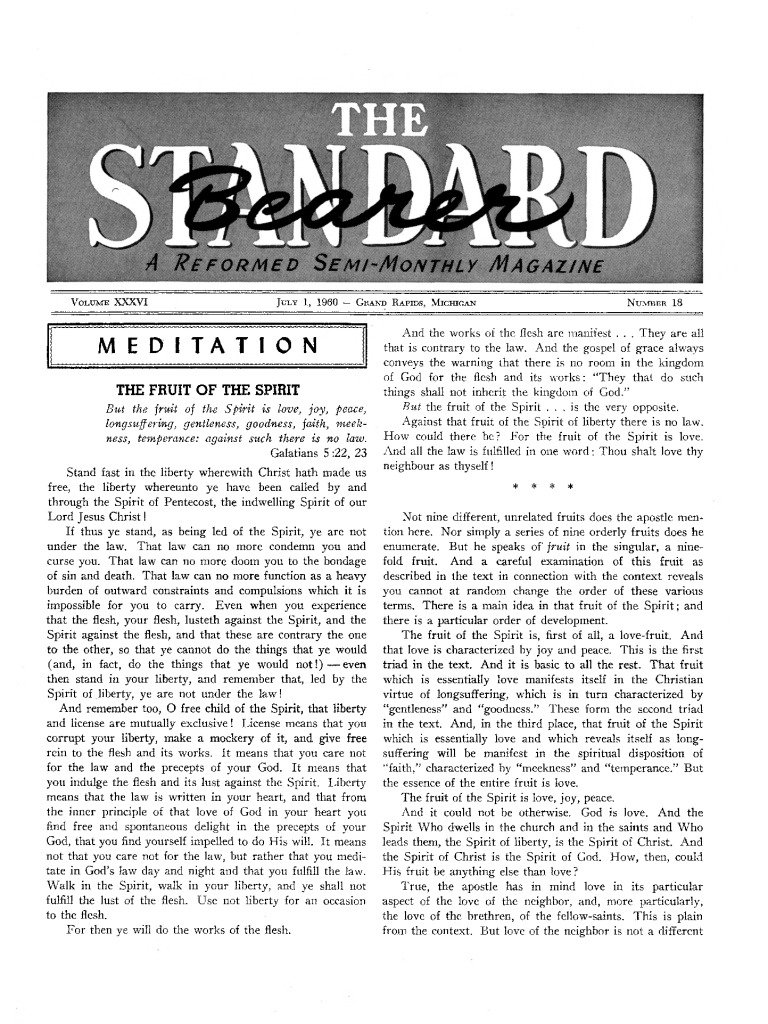