There is a school of thought which holds, be it in serious error, that in the most absolute sense the Lord was not known to Abraham by his name “Jehovah” but only by the name of “God Almighty.” It is, of course, true that the LORD Himself thus speaks to Moses at the holy mount from the burning bush. The meaning of the words “but by my name JEHOVAH was I not known to them” is undoubtedly that the implication and full meaning of that “Name” was not revealed to them yet. The faithfulness of our covenant God will be displayed before all the world in his mighty judgments upon Egyptland. When Israel sings the song of Moses at the Red Sea, as recorded inExodus 15, they sing of the implication of this Name as it had not been revealed to Abraham, Nevertheless, Abraham did know Jehovah, and learned to know Him in the long road of patience as he obtained the inheritance.

It is well to emphasize at this juncture that it was the “LORD” who said to Abram, “Get thee out of thy country.” Any Bible student knows that the KJV of the Bible translates the name Jehovah by the term LORD, each letter being capitalized. And Jehovah is the God who comes down in tender mercy, grace and love and saving power to redeem His own peculiar people which He has sovereignly foreknown. All heathendom is characterized by the attempt of man to reach up and to appease God. But that is not the salvation of the LORD. He comes down in His condescending love and reaches us in our deepest woe, sin, death and hell. And thus he also comes to Abraham in Ur of the Chaldees. He finds a sinner and makes him a justified-sanctified saint. And Abraham learned to sing,” Good is JEHOVAH, and full of kind compassion!” Twice our text in Genesis 12:1-4 speaks of the LORD, that is JEHOVAH. Also in Genesis 15:7 we read “And he said unto him, I am the LORD that brought thee out of Ur of the Chaldees to give thee this land to inherit it.” The Lord says that He is the Jehovah God who has done this.

In New Testament terms and language this means that the heavenly Father of our Lord Jesus Christ came to Abram with his command to leave his country. And this Father of our Lord Jesus Christ is the God of all glory. Thus Stephen, standing before the Sanhedrin in trial, speaks of the Lord here. Says Stephen in Acts 7:2 “. . . Men and brethren, hearken; the God of glory appearedto our father Abraham. . . .” Jehovah is there fore the God of all glory in the face of Jesus Christ. However, in Abraham’s day the Word had not yet become flesh; He had not yet tabernacled amongst us. And so the eternal Word came in a Theophany to Abraham. When the LORD spoke to Abram it was the God in Jesus who was speaking. It was a great glory which was seen. It was the glory of the riches of God’s redemptive purpose which spans the ages. Wherefore Paul can write in Galatians 3:8 “And the Scripture, foreseeing that God would justify the heathen through faith, preached before the gospel unto Abraham, saying, “In thee shall all nations be blessed.” Hence, our text here in Hebrews 11:8 speaks of a “calling” which is by the preaching of the gospel. And this preaching is infallibly inscripturated. All the Scriptures preach this same gospel, whether in the Old Testament or in the New Testament! Thus the God of glory came to preach to Abram, to call him to go forth from his country, kindred and relatives!

Abram was “called” by the LORD!

That Abram was called by the Lord should be carefully noticed. The form of the calling must not be limited to the command “get thee from thy kindred, country” but the form of this calling includes all the great and precious promises which God gives to the father of all believers. It is certainly true that God united his promise with the command here. And what God has joined together let no man put asunder. Then we would not rightly divide the word; we would be a workman who will be ashamed. However, the interpretation of the relationship in which this command and these promises stand to one another must not be overlooked, neither must this be misinterpreted. We may not interpret that fulfillment of the promise as conditioned upon the obedience of Abraham. This was not a conditional promise of the LORD. He nowhere says what he will do if Abraham goes forth from his country. Notice the emphasis in the text on God as the one who will do all this, “I will make of thee a great nation, and I will bless thee . . . and I will bless them that bless thee, and curse him that curseth thee, and in thee shall all the families of the earth be blessed.” Abram is to obey in the context of this command and promised! He is to obey as the recipient of so great a love. He is the recipient of the exceeding riches of grace and mercy which come down from the God and Father of our Lord Jesus Christ.

Yes, He is the King of glory. He came to Abram. It was the glory of the mighty power of God to not only promise, but also to bring this all about. He is God Almighty. Nothing is too great for God to perform. He will raise the dead to life and call the things which are not as though they were. (Romans 4:17) That is glory of grace and sovereign might and power. God came in the glory of his love, mercy and lovingkindness. He did not yet reveal all the details, but He does stipulate the great promises, which He alone can and will fulfil. He is the God of all glory!

The form of the call to Abram is “Get thee out of thy country, and from thy kindred, and from thy father’s house, unto a land that I will shew thee” (Genesis 12:1) When we interpret this in the light of all of Scripture we find that basically Abram is doing more than exchanging one country for another. In the first place, it should be noticed that Abraham must leave permanently. He does not merely go to another country for a little visit and then to return. He must turn his back to his country and never return. It is clear from the Scriptures that thus Abraham understood the command and the promises. At the time of Isaac’s need of a wife Abraham takes an oath that Elieger will not take Isaac from the land. (Genesis 24:5b) It is also emphasized in the letter to the Hebrews that, although the patriarchs had ample time and opportunity to return to their native country, yet they continued in the land of Canaan as strangers and pilgrims. (Hebrews 11:15, 16) The basic implication of this all is that the “calling” is virtually the upward calling of God in Christ Jesus. It was the calling by which Abraham could set his eyes upon the celestial city, the New Jerusalem.

Thus are the revelational perspectives here in the great and precious promises. They make the calling to Abraham the upward calling of God in Christ Jesus. We should notice the following elements:

1. “I will make of thee a great nation.” Now this is exactly what the Lord does in Abraham. The Sacred narrator had already noticed in Genesis 11:30“But Sarai was barren; she had no child.” And, as is crystal clear from Scripture, this indicated that, shall Abraham become a great nation, it is the LORD alone who will perform it, as the God of all glory. And this has in it the very essence of pointing to a “great nation” which is to be a chosen generation, a royal priesthood, a peculiar people, to proclaim the praises of Him who called them from death to life, and from darkness into his marvelous light. (Exodus 19:4-6; I Peter 2:5-9) Yes, that was Israel, the twelve tribes as they grew into a mighty nation in Egyptland. This was the fulfillment of the later manifestation of the LORD telling him “how these things would be.” (Genesis 15:8-21)

2. However, the heavens lift and the perspective widens in this “sermon” of the LORD to Abram, calling him to press on into God’s future. For God says further “I will bless thee.” This means that Abraham will stand in the special favor of God’s saving grace in Christ Jesus. He is justified and sanctified, and from him the Christ shall come. The Christ is in his loins! And in Isaac shall the seed be called. (Genesis 21:12; Romans 9:7, 8; Hebrews 11:18)

3. Moreover, Abraham’s name shall be made great He will have a great name! The name in Scripture is the expression of the essence of one’s place and position in the kingdom. Abraham is the chosen vessel, to have the place which is expressed in the name “ABRAHAM.” The LORD comes to him and says to him “neither shall thy name any more be called Abram, but thy name shall be Abraham; for a father of many nations have I made thee.” (Genesis 17:5) This name is mentioned 170 times in the O. Testament Scriptures, and 70 times in the N. Testament Scriptures.

4. Finally, Abram is to be the one in whom all the kindreds of the earth will be blessed. And this will be in the great Son, the Seed, who is to come; he will come from Isaac, the son of the promise. And all the chosen Gentiles from all nations will be justified freely by faith. And these shall one day be the numberless throng in glory.

Thus we see here a “calling” which is upward; it is a calling from earth to heaven.

BEING CALLED ABRAHAM WENT FORTH

The text in Hebrews 11:8 suggests very strongly, by virtue of the grammatical construction that there was no hesitation on the part of Abram to obey the Divine command to go forth to a land which God would afterwards shew him. A word of caution is here in order. It is true that Abram obeyed upon the command. He asked no questions. He simply went out.

Still this has limitations. Although Abram went forth in faith it nevertheless remains true that he was a man of like passions as we are. He only performed mighty deeds “by faith.” But all was not faith, not even in Abram. How flesh cleaveth to flesh is evident also here. To understand this we must remember that there seems to be a twofold account of Abram’s leaving for the land of Canaan. Yes, “into the land of Canaan they came.” There was, perhaps, a wrestling of faith here. For when Abram leaves Ur of the Chaldees he is led by Terah his father. With them go Nahor his brother and the wife of Nahor, Milcah, and Lot the son of Haran his brother, and Sarai his wife. And they all leave Ur of the Chaldees and go to Haran. And here Abram lives for several years. It was from here that Abram finally moves to come to Canaan. And one receives the impression that the LORD needed to repeat this word of command to Abram to leave even his kindred, his family.

And when this call came once more, then it was that Abram obeyed resolutely. And this was by faith. O, there was in Abram, too, so much which was not out of faith. This was true of the father of believers. For proof of this we have but to see how twice he lied concerning the identity of his wife Sarai. He, too, was a poor sinner. But he did not fall back into perdition, but believed, to the saving of his soul. 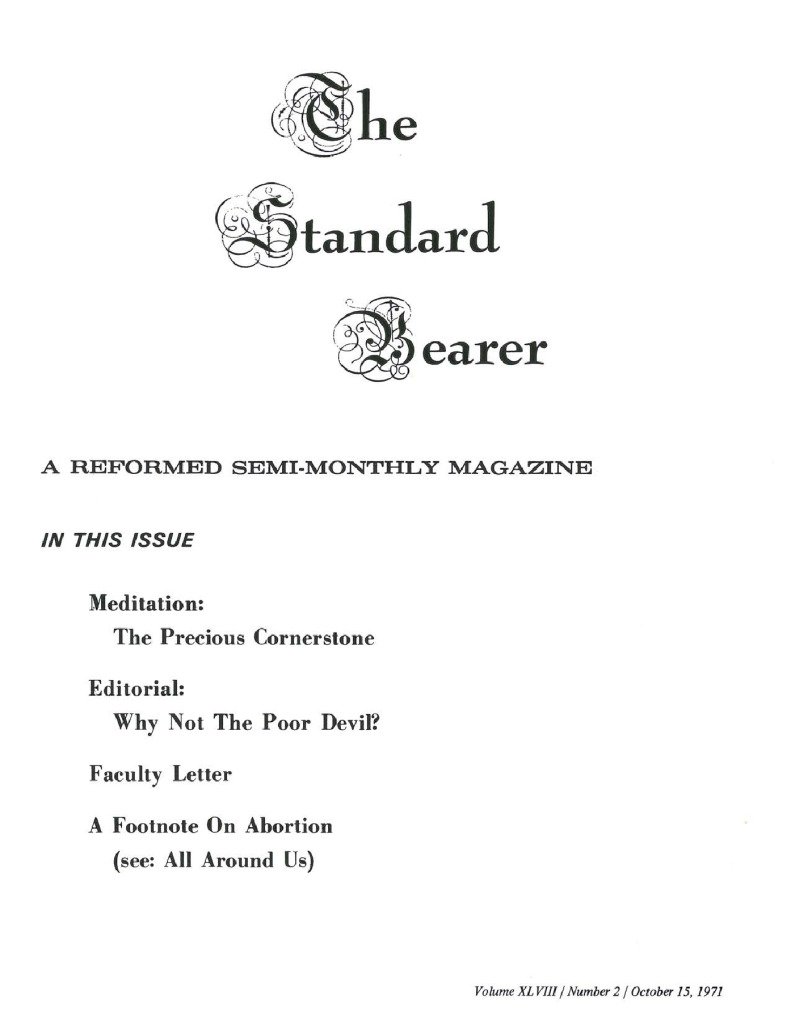