THE RELIGIOUS CAIN REJECTED WITH HIS OFFERING (Hebrews 11:4)

The sacrifice of the wicked is an abomination to the LORD. God is a spirit and they who worship Him must worship Him in spirit and in truth! (Proverbs 21:27; John 4:24) For the eyes of the LORD are upon the righteous, and His ear is directed to their cry; but the face of the LORD is against them that do evil, to cut off their remembrance from the earth. (Psalm 34:16, 17) God hates the religion of the wicked, even when it tries to parade as the genuine faith of the saints.

One is impressed when he reads the narrative in Genesis 4 with the fact that Cain was a religious man; no, he was not sound in doctrine and life. He was not a righteous man, but he was evil, basically and fundamentally evil, dead in trespasses and sins. He was a man who did the works of his spiritual father, the Devil! He is a representation of the seed of the Serpent, whose head shall be crushed by the Seed of the woman. Yet, in spite of this, Cain was a very religious man!

Cain also proves that no one of the fallen sons of men can bring forth the man of God. That is only performed by the wonder of God’s marvelous grace and love. The flesh profits nothing, but the Spirit giveth life. The Genesis account tells us that Eve hoped that the birth of her first son might mean that she had received the promised Seed, the man from Jehovah. For the name Cain is derived from the verb “kanah” which means: to bring forth, to possess, to obtain. This must have been the painful reminder that she would bring forth children in sorrow! In this son she would have great sorrow! The Bible does not give us a natural biography of Cain. We are told only that the young boy became a man, and that at “the end of time” Cain brought a sacrifice to the LORD. And in this offering the deepest attitude and thoughts of Cain were laid bare, yea, his deepest attitude and thoughts toward God Himself and toward those who are the children of the most high God in the midst of this evil world.

Cain is, even in his bringing of the sacrifice, in the gall of iniquity. Yes, he brings of the fruit of the ground. Cain was a tiller of the soil. He brings to the LORD the fruit of his labors. He will bring the LORD a present; He will do something for the LORD. He does not come to bring a sacrifice in which he expresses either what the LORD will do for him (a sin-offering) nor does he bring an offering in which he expresses his thankfulness to God, for what He has done for him, a thank offering! Yes, he possibly placed it on the altar, presenting it to the Lord! But he is not thinking of the merciful, loving-kindness of the Lord as expressed in the “mother-promise” of Genesis 3:15. He does not need the Lord for the forgiveness of his sins. He does not come confessing his sins, saying “O God, be merciful to me, the sinner.” He does not even conform to the basic rule of God, “The Lord lifteth up the lowly, but the proud He resisteth!”

Yes, God was not pleased with Cain’s offering. He was not pleased with Cain’s offering, because he was terribly displeased as the Judge of all the earth with both Cain’s original and actual sins. He does not merely reject Cain’s sacrifice. He rejects Cain! He had no respect to Cain, neither to his offering. The word “respect” in the Hebrew is “shaah” which means: to look at, to glance at. God would not even give it a first look. He would not glance at it as the Judge of all the earth. Both Cain and his gift were unacceptable. Cain himself was rejected. He did not go home justified; he did not taste the goodness of the Lord. God’s Spirit did not testify with his spirit that he was righteous. The wrath of God abode on him in his heart and conscience. He did not see in the distant future the realization of the promise as a glad and blessed prospect. On the contrary, he could only feel the wrath of God, temporally and eternally. And he had no peace, as have none of the wicked!

This all manifested itself. What was in Cain’s heart registered on his face. For the face is the mirror of the soul. He was very wroth. His face is fallen in dejection and in self-condemnation. There was no health of his countenance. Then the LORD spoke with Cain. And here the LORD unfolds the deep principle of spiritual psychology of wrath and a fallen face. He too, incidentally, shows the deep principles of true psychiatry, the healing of the soul, the lifting up of the face. We see here that there are two triads. Either it is faith, hope and love, or otherwise it is doubt, despair, hatred. And these are really the only two alternatives. And Cain falls into the latter category.

It is a rather difficult passage which we have here inGenesis 4:7. In general it may be said that the Lord God is here placing before Cain the law of life and death. God lifts up the just and he casts off the wicked. God is just in so doing. Cain has no right before the face of the LORD to feel that the LORD did him injustice by rejecting him and his offering. Cain’s heart was not right with God. The rule is: if anyone does good, he is lifted up. And if he does evil, sin croucheth as an evil and destroying beast at the door. Sin will then take wholly captive its victim, destroying him forever. Will he rule over sin, then he must do good, confess his sins, plead for mercy and forgiveness. That is the way of life, the only way to be accepted and to have the countenance lifted up, whereas we are thus lifted out of the miry clay and our feet established.

He calls Abel out into the field. There he accosts Abel, speaking with him. And Abel must have witnessed of his faith, and spoken and confessed the name of the Lord, and denied him not. He took, so to speak, the side of the living God in this matter. He does this in faith. And he is killed.

He becomes the first martyr!

No, Cain did not hate Abel as a blood-brother. He was perhaps his own twin brother. No, he hates Abel because he cannot find in him a companion to sin. The world only knows and loves its own. Here the evidence is seen of the enmity between the two seeds. Cain cannot allow Abel to live. Abel is killed by Cain because the latter hates God. And Cain is unrepentant, He says: Am I my brother’s keeper? He was even without natural affection! And he is stout-mouthed before the living God.

And he is driven from the presence of the Lord.

He is excommunicated from the church of the most high God. He had a religion which had the form of godliness, but which denied its power! Cain did not bring his offering by faith. He is of those who fall back into perdition, the proto-type of all those who are evil and wicked apostates from the faith. And their name is legion!

THE BELIEVING ABEL EXCELS WITH GOD IN HIS SACRIFICE (Hebrews 11:4)

The writer to the Hebrews draws a sharp contrast here between the sacrificial gift of Abel and that of Cain. The purpose of the writer is to urge the believers out of the Hebrews on to faith which is for the final receiving of salvation. The writer believes better things of the churches to which he is writing.

Wherefore he writes concerning the faith of Abel. Abel is the first martyr! Does not Jesus, speaking of all the prophets, include Abel among them? Thus he spoke on the last day of his public ministry in the city of Jerusalem. “Wherefore, behold, I send unto you prophets and wise men, and scribes: and some of them ye shall kill and crucify: and some of them ye shall scourge in your synagogues, and persecute them from city to city, that upon you may come all the righteous blood shed upon the earth, from the blood of righteous Abel unto the blood of Zacharias son of Barachias, whom ye slew between the temple and the altar.” Thus Abel is placed in the category of the prophets by Jesus Himself. Furthermore, he is placed at the head of the long list of prophets which ends in the slaying of Zacharias in the days of king Joash. It is a note-worthy fact that in the Hebrew Old Testament Canon the Book of II Chronicles holds the last place. And what is recorded of the death of Zacharias is epochal in significance. It is really the end! For this prophet dies saying “The LORD look upon it and require it.” And He did. To shed the blood of a prophet, to stop his mouth by killing him in the very temple of God, between the altar and the temple, was a most dastardly act of highest unbelief as a rejection of the Word of God. It was from this time on that Judah declines, until they are deported under Nebuchadnezzar into Babylon. The land spewed them out! Thus was the case, too, in the days of Jesus. The house becomes desolate. And thus it was already in the days of Abel: Cain must dwell in the land of desolation. For Cain shed the blood of a prophet, a just man! Cain slew Abel because he was just in confession (prophecy) and walk (sacrifice)!

The text says that Abel offered by faith. This was faith which is the substance of things hoped for, the evidence of things not seen. And this faith was the gift of God. It was the wonderful power of God which operated in Abel’s heart, regenerated him, called him to faith and godliness. In this faith Abel saw that he must bring a sacrifice. He must place it upon the altar.

He must kill an animal, must shed his blood. For the life is in the blood. That the term sacrifice means to make a consecrated gift ought to be clear to us. For the altar sanctified the gifts. The altar was a little piece of earth raised up. It was to be made of earth or of unhewn stone. The tool of man might not fashion the stone. It must proclaim that there is nothing in this dedication from the hands of men. God dedicates that which is on the altar to Himself. And Abel knew that this was the blood which covered as it was sprinkled upon the altar. That the skins of these animals covered their nakedness was only because their spiritual nakedness was covered by the blood of the Lamb.

Thus he excelled in faith. Faith is the victory which overcomes the world. He excelled by bringing a better sacrifice as the expression and confession of his faith. Thus Abel is among all the victorious ones who say “thanks be to God who giveth us the victory through our Lord Jesus Christ.” He is with the souls under the altar who cry “How long, O Lord, holy and true, dost thou not judge and avenge our blood on them that dwell on the earth?” Yea, he is with them which are told “that they should rest yet for a little season, until their fellow servants also and their brethren, that should be killed as they, should be fulfilled.” 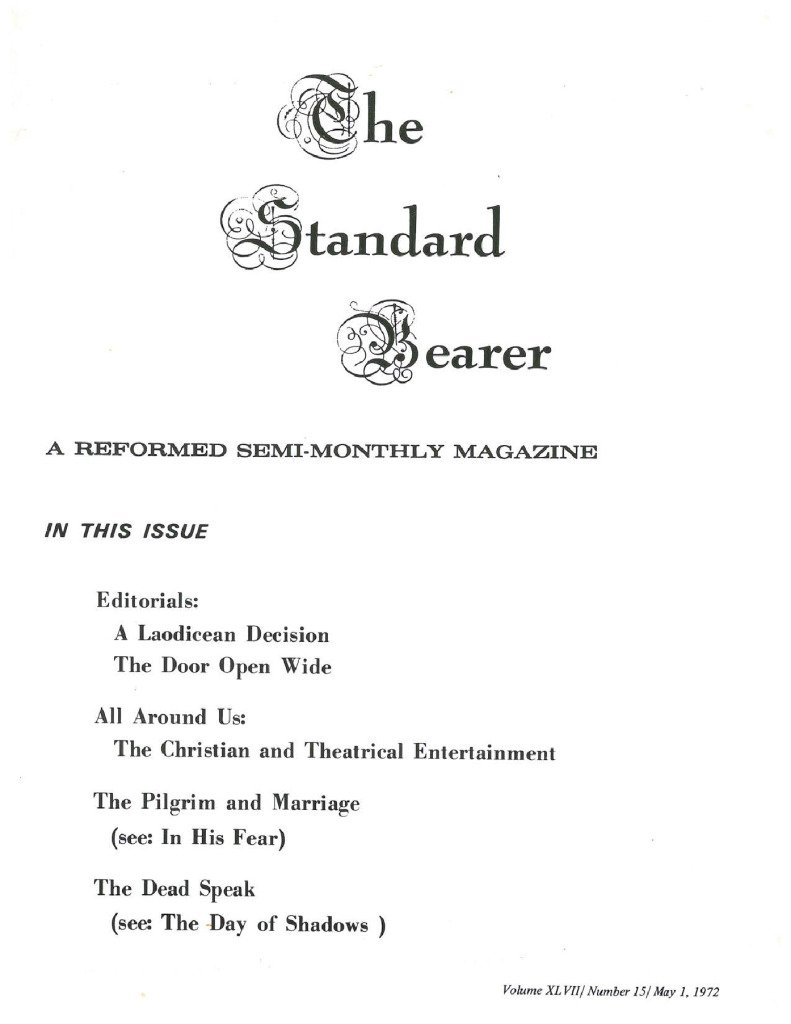