There is a certain contrast here in the text between that which the Lord did when He spoke on earth at Sinai and what He did when Christ came upon earth as God in the flesh to build the eternal temple of God. The one is called simply “speaking on earth,” and the latter is the manifestation of the fulfillment of what God “has promised.” And it is to the latter that the attention of the Hebrew Christians is called, both as a warning for them and as a great and strong consolation for them to press on in faith and hope. The verb “he hath promised” in the Greek is in the perfect tense, middle voice, and indicative mood. It is the fact mood. God really did promise. It is a tense which indicates that this is a promise which is full, complete and actual up to the very present moment. It has in it the Yea and Amen in Jesus Christ. It is a voice which indicates that this is a promise which God made somehow related to Himself, to His own honor and glory. He will bring it to pass. He is not a man who would lie. It is a promise which is complete up to the present moment, most relevant, now that Christ has come and God has begun really to shake not only the earth but also the heavens, and to usher in” his unmovable kingdom. And, therefore, the believers of the Hebrews must be warned against backsliding; but they must also .take heart and serve the Lord with godly fear and holy awe. They must worship God as He has revealed Himself in the fulfillment of the promise, and obey the gospel of Christ as the fulfillment of that promise which God has made. Then, and then only, will they give heed to Him that speaketh as the divine oracle.

We should pay a little attention and study a bit in depth the historical situation in Israel when the LORD gave this promise of the shaking of heaven and earth. We read of this in the prophecy of Haggai, Haggai, with Zechariah and Malachi, is one of the post-Babylonian prophets. These all speak in rather clear language concerning the greater and better things which God has in store for His people who returned as the “remnant” from Exile. These had once hanged their harps upon the willows in Babylon, and could not sing the LORD’S song in that strange land. They longed for Jerusalem and could not forget her hallowed place of the temple, which had ruthlessly and cruelly been destroyed ‘by the fierce hordes of Babylon, being made a theater and spectacle to the nations, particularly Edom. Now these exiled ones had returned as a small remnant of the multitude of Israelites which remained comfortably in their foreign land. But they had returned according to Isaiah’s prophecy. (Isa. 10:21-23, Rom. 9:27) They had returned according to the prophecy of Isaiah that Cyrus would give the commandment that Israel return and rebuild the temple. (Isa. 44:28; Isa. 54:1-7) According to Ezra 1:1-5, it was Cyrus who gave this command for Israel to return and to rebuild the temple. Thus these true children of Zion, who had hanged their harps upon the willows, returned with rejoicing to Palestine to a rebuild their temple.

But all was not a road of ease and leisure for the “remnant” which returned. There was much work to do; arduous tasks awaited them, and much opposition from the enemies of the temple of God. It was especially from the Samaritans, who would help them build their temple to the Lord, that they experienced their worst opposition. Howbeit, the greatest enemy of the believers in Israel was their own littleness of faith. When they came to the land of Canaan, they began to rebuild their own houses, and beautified these. Yes, they had laid the foundation of the temple; but the occasion was not one of unmingled joy. Those of the older generation, who had seen and remembered the beautiful temple of Solomon, wept aloud, while the younger generation rejoiced. It was not a pure symphony of anthems of rejoicing to God. There was deep bitterness and pain in it all. And so Israel was slow in building the temple on the foundation which had been laid by Ezra and the people. And for this cause the afflicting hand of the Lord came upon Israel. Their lands did not produce, and God kept rain from falling. It was His chastisement to bring Israel to its sense of duty. In this situation God raised up two prophets, Haggai and Zechariah. Both prophesied concerning the temple and its future heavenly reality, when the tabernacle of God would be with man, when Christ would have come. Israel must live by faith as the substance of things hoped for, and the evidence of things not seen; (Ezra 5:1, 2) they must not have slack hands and trembling knees. Such is a bit of the background of God’s promise to shake not only the earth but also the heaven. Sinai and the heavenly Jerusalem will be shown in their proper perspective.

That is what God does when He gives His word-of “promise” to Haggai that He will shake all things. This little temple, which in its size and dimension came from the drawing-board of Darius, (Ezra 6:3) was really not much cause for rejoicing. It was really not much more than a “shed.” (See Calvin on Haggai) And Israel needed something to buoy their flagging spirits. So the Lord comes with His word of promise concerning a great house which He would fill with His glory. It will be greater than Solomon in all his glory: for a greater than Solomon will (has) come. (Matt. 12:42; Luke 11:31) That temple will be such as is greater than Solomon’s temple. God does not dwell in temples made with hands. (I Kings 8:27) Such was Solomon’s confession at the time of the dedication of the temple. He saw the temple which he had built in its pristine newness, and confessed that it was not an adequate house for God, Who is so great that the heaven of heavens could not contain Him. Of such a temple God speaks to Israel in Haggai. Such a temple and its building requires us to understand the truth that God alone is the builder of such a temple made without hands. Such is the temple of God’s promise to Israel by the mouth and prophecy of Hagaai. It is the temple whose reality we see in Mt. Sion, the city of the living God, the heavenly Jerusalem, which Abraham saw from afar in faith as he dwelt in the land of the earthly Canaan, confessing that he was a pilgrim and a stranger in the earth.

Now the word of promise is: “Yet once, it is a little while, and I will shake the heavens, and the earth, and the sea and the dry land, and I will shake all nations, and the desire of all nations shall come, and I will fill this house with glory. . . . The glory of the latter house shall be greater than the former, saith the Lord of hosts: and in this place will I give peace, saith the Lord of hosts.” (Haggai 2:6-9) This is a wonderful word of promise which is “spoken from heaven” in Jesus Christ. He is the “desire of all nations,” the eternal Son, Who upholds all things by the word of His power, and by Whom the ages are made in God’s special providence over His people, and Who after Be has brought about the purging of our sins by Himself, sat down on the right hand of the Majesty of God.

Now the word of promise to Israel by Haggai speaks of a “little while” yet. It will not be long for Him with Whom one day is as a thousand years, and a thousand years as one day. Besides, it would indeed be soon: less than 500 years, and then Christ would come suddenly to this temple. With the funds of Herod the temple would be in the process of being rebuilt; men would try to build the LORD an house. But that temple would be utterly destroyed by the Roman legions in the year 70 A.D. The Lord would build Himself a house. Yes, it will be earth-shaking and heaven-removing; the latter will be rolled up like a scroll. It will be such that “I will fill this house with my glory.” It will be the glory of God’s power, might, wisdom, honor, grace, mercy, and majesty. It will be a living temple of God, wherein the living God can dwell. It will be in the spiritual stones, in the hearts of all His elect people, from the east and from the west and from the north and from the south. Thus will God shake all nations by the sovereign power of His grace. And the temple will be a house of prayer of all nations. (Matt. 21:13; Isa. 56:3-8)

We have now “come” to this shaking of all things, of heaven and earth and of all nations. We have come to the heavenly Jerusalem. We do not yet see it all realized in its perfected form; we do not yet see all things subjected unto Christ—angels, men, heaven and earth and all things. But by faith we see Jesus crowned with glory and honor for the suffering of death. (Heb. 2:8, 9) But we do see the throne of His kingdom at God’s right hand, greater than David’s throne in the earthly citadel of the Jebusites. And so we do enter into an unmovable kingdom now by faith. The weeping exiles can now really dry their tears and not weep over the temple less glorious than Solomon’s. We hav,e set our feet within thy gates, O Jerusalem, the heavenly city. For we have come to the blood of sprinkling of the Mediator, Jesus. He is the Desire of all nations, and not simply of a few natural descendants of Abraham. In thee and in thy seed shall all nations be blessed. He built the temple in three days in His death and resurrection. Wherefore, there were signs which were earth-shaking, both in His dying and in His resurrection. (Matt. 27:50, 51; Matt. 28:1, 2)

This is the ushering in of our unmovable and unshakable kingdom and inheritance, which is incorruptible, undefilable, and which fadeth not away. This kingdom we “have” now as the New Testament church. It is ours legally as heirs of eternal life. We have come to this salvation in the desire of all nations. Our walk should be accordingly. We should not attempt to turn back the clock of God’s covenant dealings with His temple-building, and once more return to the status of the Old Testament, which only could lead to tears and bondage. We must worship God. in an acceptable way. Not to do so after God has spoken so clearly from heaven (Heb. 1:1-3) is not innocent. Such are not serious in serving the Lord in Spirit and in truth. (John 4:20-24). They refuse to listen to Him Who speaketh from heaven.

Now over such the Lord our God is a consuming fire. He destroys all unbelievers and those who are disobedient to the Son. Israel in the desert could not enter into the land because of their unbelief. And those who do not listen obediently to the words of the gospel in Christ also perish in their unbelief. They trample under foot the Son of God, account the blood of Christ to be impure (common); and they do despite to the Spirit of grace. Let us then run the race with patience, looking unto Jesus, the Desire of all nations, the great Temple-builder of God.

The great glory of the Lord, grace for grace flows from Him into His temple, pure, pristinely clean—a Bride without spot or wrinkle, or any such thing. 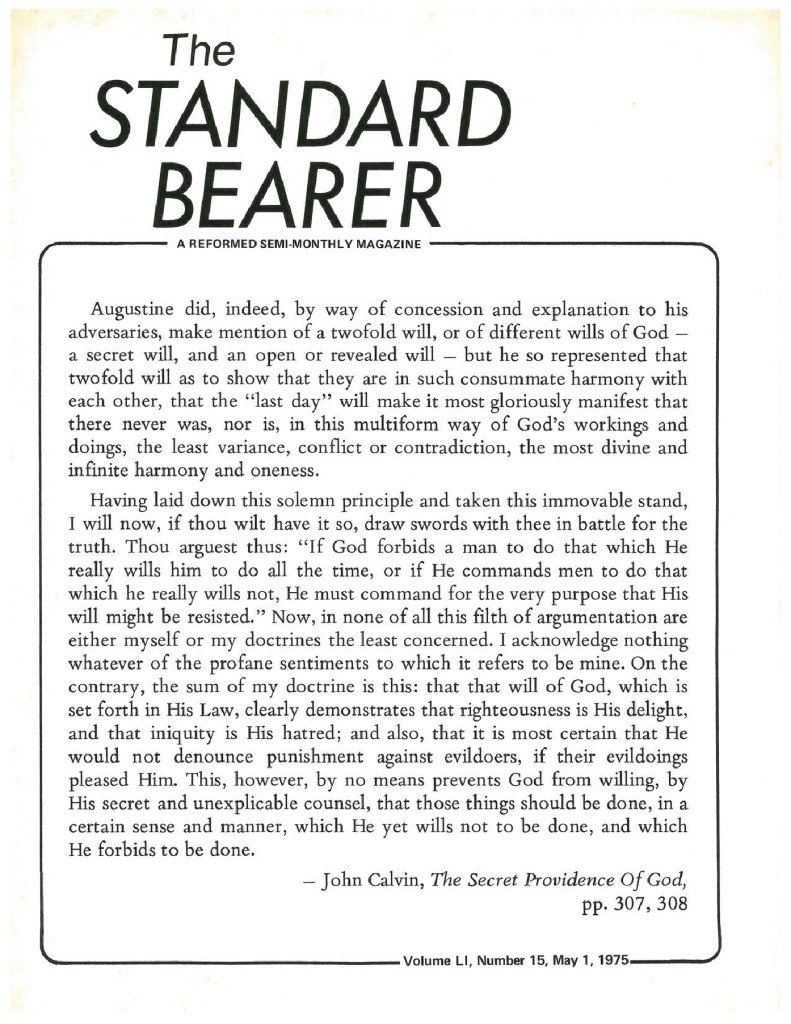