THE MEDIATOR OF THE NEW COVENANT—JESUS (vs. 24)

The greatest and climactic detail concerning the glory of the heavenly Jerusalem is that we have now “come to” the Mediator of the new covenant. We have not come to the law-giver, Moses, who was faithful in all of God’s house as a servant (Hebrews 3:3); but we have come to Jesus, the High Priest of our profession, Who is the Son, and Who is the builder of the house. He is a priest forever after the order of Melchisedec, by virtue of God’s Word of promise and of oath which cannot be broken.

In Hebrews 8:6 the writer says that Jesus has obtained a more excellent ministry than that of the priest of the Old Testament tabernacle. The reason is that He is the Mediator of a better covenant. It is the covenant in which the law is written upon the hearts, and the sins are removed forever and are remembered no more, and which covenant cannot be broken. (Heb. 8:7-13) The viewpoint here is of a “better” covenant, comparing the Old Testament Covenant with the New Testament in Christ’s blood. Here the covenant is called “new.” The term for “new” here in the Greek is not kainos, that which is unworn, newly made, but here it is neos, which is new and does not belong to the old order of the shadows and types of the Sinaitic tabernacle. It is the covenant which is new because it is the complete removal of our sins and guilt and is the covenant life of the heavenly Jerusalem and the temple of the living God dwelling with His people. It is the new covenant based upon the better promises of God which assure us the eternal, spiritual verities, which cannot be lost or be taken from us. They are eternal, secure; and belong to the things which the Judge of all men approves.

For this covenant is such that it is the application of “blood of sprinkling.” This blood is the blood of the Son of God in our human nature. It was shed on the cross, and now, the King-Priest has also “sprinkled” this blood on the mercy-seat of the Ark of God’s covenant, so that the throne of God is a throne of pure grace for us and is the mercy-seat. We have access to God forever by this blood of sprinkling of the Mediator, Jesus. For this Jesus’ blood is not common blood; it is the blood of the Lamb of God, which taketh away the sin of the world. (John 1:29) It has eternal value, we must remember; it is blood which cries for forgiveness and atonement. It “speaks” of the mercy and forgiveness of God. Peace with God has been made for us by this blood. (Col. 1:20) and we have redemption from sin through this blood. (Eph. 1:7; Eph. 2:13) And we have free access into the holiest place of God by means of this blood. This “blood of the Lamb,” which the Mediator brought, is the means of mediation. It is the atonement price which was paid! All other blood which is shed is like the blood of Abel in the church. Many saints have died by the sinful hands of cruel men, even all the prophets; and their blood cries for vengeance. But this blood “speaks” another language. It speaks of peace, reconciliation, righteousness, and joy in the. Holy Ghost.

And now we need not tremble when God speaks from Mount Sion, the city of the living God, the heavenly Jerusalem. We can look away to this Jesus, Who, for the joy that was set before Him, endured the cross and despised the shame and is set down on the right hand of God. To this new status quo we must cling with all our hearts, and not be moved from the hope of our calling. And, therefore, we must not have feeble hands and weak knees, but be strong and vigilant in the battle of faith. We must not allow a root of bitterness and unbelief to take over in the church, and that many be troubled and depart from the faith.

This word of warning here deals not simply with the danger of falling into transgression of some of God’s commandments because of the weakness of the flesh, but it deals with the sin of apostasy from faith in Christ to unbelief in rejecting Christ, accounting the blood of Christ as being “common,” not having redeeming power. Such is the sin of unbelief. This was the sin of unbelief of Israel of old when they refused to obey the Lord and enter into the land of promise. They could not enter because of their unbelief. (Heb. 3:19)

A little survey of Hebrews will demonstrate that such is the repeated refrain and warning of this letter. Already in Hebrews 2:1-3 there was such a warning uttered by the writer. It warns against neglecting so great salvation, and points out what happened to Israel of old when they did not give heed to the word which was spoken by angels to Moses at Horeb. And then the writer makes the comparison with what will happen if we neglect what was spoken by Christ Himself as the Lord of His church while on earth, and which was later confirmed by the preaching of the apostles who heard Christ personally in all of His preaching. God is a jealous God in both dispensations; however, He is more severely so in the New Testament dispensation. Or, again, notice how the writer warns against an evil heart of unbelief to turn away from the living God (Heb. 3:12), and shows what happened to Israel as they died during the forty years’ wandering in the wilderness. This, is a warning finger, the warning against apostasy, basic apostasy from the faith in Christ, to mere worship in ceremonial ordinances which are of no profit. In Hebrews 6:6 we have that awesome word of God concerning those who have once been enlightened, tasted of the heavenly gift, and fall away. These cannot again return to faith, but are like the earth which brings up thorns and thistles. It can only be destroyed. And in Hebrews 10:26-30 we have a description of those who trample the Son of God underfoot, count the blood of Christ a common thing, and who do despite to the Spirit of grace. These will fall into the hands of the living God. God is a God of vengeance; He will judge His people. That is the “word of exhortation” to those concerning whom the writer is “persuaded better things.” (Heb. 6:9; Heb. 10:39)

And now the writer pens his. final great warning. He takes his warning from the keynote of Hebrews 1:1. This “note” is “God—spake in times past, and He speaks (hath spoken) now in these last days in His Son.” For unbelief is rejecting God, Who speaks to us either in the prophets or in His Son. He that rejects Moses rejects Christ; for “he spoke of me.” (John 5:46, 47) Christ is the great subject in all of the Old Testament Scriptures. Hence, let us never fail to see this fact blazoned upon the sacred page. He that rejects Christ rejects the One Who “speaketh” in the Scriptures; he rejects the testimony which God gave concerning His Son and concerning all things in Him. (I John 5:9-12)

THE GREATER REJECTION IN THE NEW TESTAMENT THAN IN THE OLD TESTAMENT (Heb. 12:25-27)

It is a dreadful thing to refuse to listen to God, Who cannot lie. It is not simply a refusing of God’s Word, but it is really a refusing of God Himself. The verb for refuse in the Greek is paraiteeseesthe. It means: to entreat, to beg off, to reject, to decline receiving. It is according to the tense used a final, once for all rejecting of God Who speaks, Who reveals Himself in His prophets and in His Son. Unbelief is a dreadful thing. It is an attempt to decide for oneself what is good and evil right and wrong. It is the sin of the apostate from God, the hater of God. Against this basic sin of unbelief to which the Judaizers would tempt them, force them even to succumb by persecution and affliction, the believers are warned and also strengthened by means of this exhortation. The church militant must be on their guard. We must stand our spiritual sentinel watch, be sober and vigilant, and not fall asleep. Hence, the “beware” in our text to the Hebrews. They must be watchful unto prayer.

The writer emphasized that the word spoken by the “one speaking” is a divine word. The term used is chreematizonta, that is, “the one giving divine communications.” (Heb. 2:3) It was no mere human word that was spoken at Sinai, nor by Christ on earth. No prophecy is of private interpretation, but holy men spoke as they were moved by the Holy Spirit. (II Peter 1:21) So that rejecting of the gospel, whether in the Old Testament at the foot of Mt. Sinai, or promulgated from the heavenly Mt. Sion, is ever a rejecting of the divine Speaker, God. That shows us the heartbeat of unbelief; it is against this that we are warned in every age.

The writer reasons from the lesser to the greater, from the fearfulness of rejecting “him that spoke on earth” to what would happen if “we turned away from him who speaketh to us from heaven.” The latter is far worse in its breadth and implication. Why? The former who spoke on earth were but earthly messengers. They were truly messengers of the Most High, but they were still but men and nothing more. Human prophets, who said, “Thus saith the LORD.” But he who speaketh from heaven is God in the flesh. He says, “But I say unto you.” He is Immanuel, God-with-us. He is the, chief Prophet, Who revealed to us the entire, secret counsel of God concerning our redemption. God spoke in these last days to us in His Son. (Heb. 1:1) And this Son is He Who “upholds all things by the word of his power.” By Him were the ages made in their beginning and in their providential control according to the counsel of God. That was speaking “from heaven.” This is my beloved Son in whom I am well pleased. He that hath seen the Son hath seen the Father.

So we see the greater rejection of the speaking God in the New Testament. Where there is more light and more revelation there is a greater rejection of the majesty of God in His Son. If those who rejected in the Old Testament in the wilderness and in Israel’s prophetical history did not escape the judgment of God, who will escape the jealous and holy wrath of God who rejects His Son? Upon such the wrath of God abides forever. 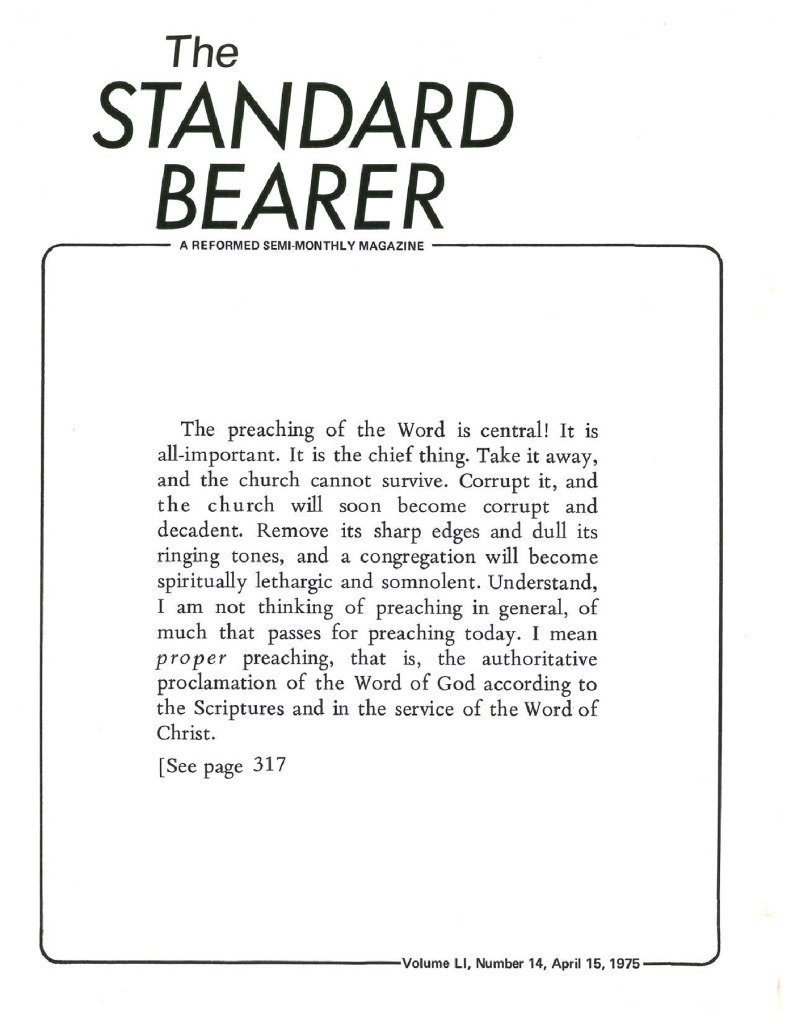