We now come to consider the faith of Jephthah, the mighty man of valor, in the days of the Judges. We will consider this judge a bit more in depth than we did both Gideon and Samson. He is blazoned on the pages of Scripture in Hebrews 11 as a man of faith, who subdued kingdoms by faith, and yet this man of God is often misunderstood in his greatness and spiritual stature in the days of the shadows. Let us attend to the teaching of Scripture concerning this giant in Israel.

Jephthah was a man of humble, yea, of sinful origin. He was really a bastard son of Gilead by a woman, who was a harlot. He was the son of a harlot, born out of wedlock, and therefore an illegitimate son. He bears this stigma in his father’s house, and is expelled by the later-born children, who are legitimate sons of their mother, a wife of Gilead. Evidently Jephthah must flee from his father’s house for his life from the face of his brethren. They would have killed him. He is an outcast!

Yet, he is a man of parts. We read “there were vain men who were gathered to Jephthah,” just as later there were such men gathered to David when he flees from Saul as an “outlaw”) He must have established a reputation with the men of Gilead, the country on the east side of Jordan.

He is also a man who is versed in the history of Israel. He is a man who believes in the covenant mercies of the Lord. At a time when Israel is departing from the Lord in serving Baa1 and Ashtorah, serving the gods of all the nations whom the Lord had conquered under Moses and Joshua, this man of God is studying Israel’s history, and he knows the history very accurately. Vagabond and outcast though he be, he seeks his strength in the knowledge that Jehovah hath given Israel the land, and that the Ammonites and the Philistines are “alien nations” which must be subdued. He is not a rash semi-heathen, who would give human sacrifices on the altar of God, literally to sacrifice his own daughter as a burnt-offering to the Lord! He is a God-fearing man, who puts his entire life in the service of the LORD! He walked by faith!

THE ARENA OF JEPHTHAH’S FAITH (Joshua 10:1-9) To understand the greatness of Jephthah’s faith we must look carefully at the times in which the LORD himself raised him up to be a judge, a deliverer of Israel. It was a time of spiritual crisis in Israel. The deep truth of Israel’s history comes to stand in sharp focus here. After the death of Gideon (Jerubaal) Israel once again fell into sin. Through the period of the judges Tola and Jair, a period of some 40 odd years, Israel dwelt in peace from the enemies. However, now Israel departed from the Lord in a very grievous way. The sanctuary at Shiloh was forgotten!! Israel served all the idol gods of the nations in their midst; they served no less than the gods of seven nations. So the Lord gave them over into the hands both of the Philistines on the southwest and into the hands of Ammon on the East. Fact is, that Ammon even invaded the territory west of Jordan, even against Judah, Benjamin and Ephraim! And the Ammonites were in the land for eighteen long years. And the wrath of the LORD was hot against Israel. Surely, it was a time to return to the law and to the testimony. And Jephthah evidently did this, judging by his accurate knowledge of the books of Numbers and Deuteronomy.

This must have been the time about the end of the days of the Judges. Jephthah evidently was a contemporary judge with Samson. And it was at this time that Israel turned rather fundamentally from their idol worship and adhered to the place where the LORD placed His name, even in Shiloh. There was a basic return to the Lord! It was true the Lord tried Israel in a pedagogical way and told them, to go and call upon the gods which they had chosen. It is then that Israel “said to the LORD, We have sinned: do thou unto us whatsoever seemeth good unto thee; deliver us only, we pray thee, this day.” And then we read the important notice,.”And they put away the strange gods from among them, and served the LORD: and his soul was grieved for the misery of Israel.” (Judges 10:16) The LORD looked down from heaven in pity upon the inheritance of Israel. And in such circumstances Jephthah must be raised up. He was raised up in the mercy of God. God was merciful and full of pity also upon Jephthah, the disinherited one by his brethren. He may have no inheritance in Israel, but was treated like one rejected of the LORD.

Small wonder that Jephthah turned his gaze upon the pages of the law of God. All his life this had been a problem; before and after his rejection from his father’s house. But now the Ammonites are challenging Israel’s very right to the land, the land which had been given them as promised by inheritance to Abraham of old. They desire to take the inheritance of Israel from them, from Amon to the Jabbok river. That is the bone of contention.

And now the disinherited Jephthah is recalled to Gilead by the leaders. It is Jephthah who understands really what the issue is. He has studied the Scriptures and the meaning of the inheritance of Israel in the land; he understands that it was a gift of sovereign grace from Jehovah to His people.

First of all Jephthah will have it straightened out about his own place and status in the land. The reward he asks is not simply a place in the inheritance of his father’s house, but a place at the head of Gilead, the highest place in the land. For that he will go to war. Says he, “If ye bring me home again to fight against the children of Ammon, and the LORD deliver them before me shall I be your head?”

Secondly, he will contend with Ammon, first of all, by the word of the mouth, the sword of the Spirit, the word of God. Such is his faith. He trusts in God who awards those who diligently seek Him. He sends messengers to the heads of Ammon, saying, “What hast thou to do with me that thou art come to me to fight in my land?” Ammon is on Israelitish soil, and has been there for eighteen years!

Jephthah will not simply subdue kingdoms, but he will do so by “having wrought righteousness,” and thus “receive promises.” He will wage a holy battle in the name of the Lord. The arena of battle is before the face of the Lord and in His name. It is a holy battle; it will be the sword of Jehovah that he will wage. In view of this holy battle in the arena of faith, it is rather clear that Jephthah refutes the claim of Ammon as having right to the land, and that Israel has stolen the land some three hundred years before under Moses, the man of God. Jephthah points out the following salient points of history, which are indisputable.

1. That Moses asked Edom to pass through their land peaceably. (Num. 20:14), and that Edom came to fight against Israel.

2. That Moses asked Moab also to pass through their land, but Moab would not consent. (Numbers 20:1)

3. That Moses requested the king of Amorites, Sihon, to pass through their land on the way to their inheritance in Palestine, and that Sihon came out to fight against Israel. It was then that the LORD gave all the land in question, from the river Arnon to the river Jabbock to Israel. If the LORD gave it to Israel who will take it from her? And the LORD has maintained thisstatus quo for three hundred years. Will the LORD now allow the Ammonites to take the land away from Israel?

In this arena of faith Jephthah wages the battle of the LORD. The disinherited illegitimate son argues the case of the well-born children of God. Behold the faith of Jephthah, the mighty man of faith! He uses the Word of God as the sword of the Spirit.

The climate of Jephthah’s vow was the climate of faith and the mighty exhibition of this faith, for the Spirit of the LORD came upon Jephthah. Here Jacob of old and Ishmael had vowed too: the Lord keep the watch between us. Here Jephthah uttered all his words before the LORD! And he vows a mighty vow to the LORD, after the Spirit of the LORD came upon him to march forth at the head of Israel in the battle to clear the Ammonites out of the land.

The Lord will hold Jephthah to his vow. It will be a severe trial of his faith and consecration to the Lord, and a sign and testimony in Israel forever. The Lord will give the victory to Israel by faith, and the inheritance of Israel shall be secure against the Ammonites. He smites Ammon and takes twenty cities, unto the plains of the vineyards, even a very great slaughter! By faith he subdued kingdoms and wrought righteousness, this Jephthah!

But he does not slaughter his daughter as a sacrificial victim. The LORD himself forbade such a sacrifice. (Lev. 18:21) That would be like letting the children pass through the fire for Moloch. God did not even allow Abraham to kill Isaac. He only received him again in a figure. It is, as Edersheim remarks, that this only happens under such evil kings as Ahaz and Manasseh. It was such a sacrifice which caused Israel to retreat from the battle-field against the king of Moab in the days of Jehoshaphat. (II Kings 3:26 f.f.)

Jephthah could not have made a vow in which he anticipated a human sacrifice. His vow is to Jehovah and it must therefore be a vow in spirit and in truth. The fact is that the daughter, when she hears of the vow, accepts it; it is a vow of such a nature that she goes to bewail her virginity. She shall not be married but shall go childless in Israel. And as such she is a sign of the Lord’s victory in which the inheritance is made secure. It is a picture of the barren and unfruitful to have a possession in the land in hope. Jephthah dies really without a son. He can have no inheritance in Israel; he is disinherited by his father’s house. He dies really childless in his generations. He who had championed in faith the right of Israel’s inheritance will have it in a better country. He did not receive the promise. He lived in faith and looked for a better country.

If the vow of Jephthah was “rash” then it was done in that boldness of faith which is the substance of things hoped for, the evidence of things not seen. Such faith sees greater things than to have an earthly inheritance under the shadows and promises. It seeks with Abraham a better country from which no enemy can dislodge the church, where the saints shall no more sin, where the gates shall not be closed.

And so the name of Jephthah is decked in gorgious colors in that catalogue of saints mentioned in Hebrews 11. He is one cast out from among men of whom the world was not worthy. And he is in the cloud of witnesses who encourage us to great acts of faith, and to pay our vows unto the Most High. 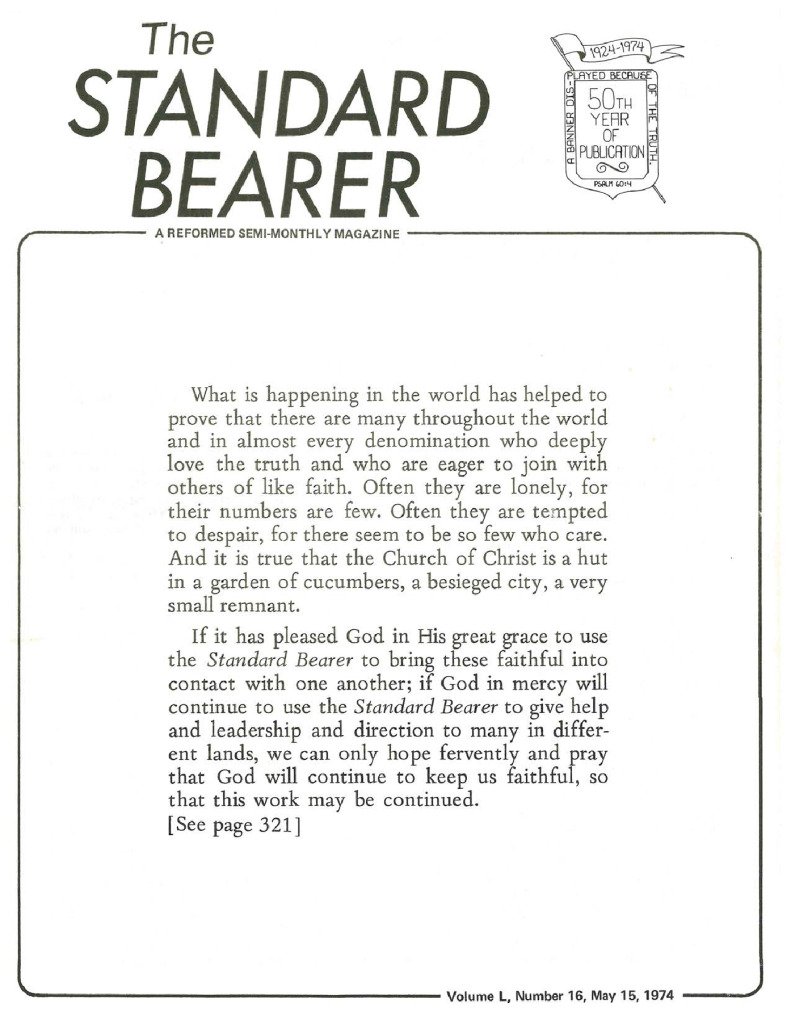