CALLED UNTO LIBERTY IN CHRIST (Galatians 5:13)

Christian liberty is not the same as sinful, fleshly license. It is true a thousand times that we are not “under law” but we are “under grace.” (Rom. 6:15) To be under law means to be under the power of law, as this law is the power of sin! (I Cor. 15:56) They, who are under law, are under the curse of the law; the law only works wrath apart from grace in Christ! (Rom. 4:15) The letter kills! (II Cor. 3:6) From this bondage and slavery of the law we have been redeemed; all the just demands of the law have beep fulfilled in Christ; they have also been fulfilled in us, who walk not after the flesh, but who walk after the Spirit. (Rom. 8:4) The law of the Spirit of life has made us free from the law of sin and of death. (Rom. 8:2) And, therefore, we do not say: let us continue in sin, that grace may abound. God forbid! (Rom. 6:1)

Such is here the clarion-sound of the Gospel-precept as set forth here in our text in Galatians 5:13!

The apostle writes rather emphatically that the Galatian believers have been called unto liberty. In the Greek text this is indicated by humeis . . . ekleetheete-ye, ye have been called unto liberty! No matter what these false teachers may say, the truth is, once and for all, that ye had once and for allbeen called, yes, called unto liberty. Such is indicated in the Greek text which uses the Aorist tense. And it was a calling out of darkness into God’s marvelous light. (I Peter 2:9) This efficacious calling constitutes these believers to be new creatures. They have been created in Christ Jesus unto good works, which God before prepared, that they might walk in them. (Eph. 2:9, 10) Such new creaturehood is all that matters; it is not circumcision, nor baptism, but a new creature, which has power unto godliness and holiness and love. (Gal. 5:6) In this liberty of those born from Jerusalem which is from above we must stand! And we must stand in it spiritually in our liberty in Christ. We must remember that he that doeth sin is a servant of sin. (John 8:34) But our calling to liberty is of such a nature that the truth has made us free, so that we abide in Christ, as a branch abides in and lives out of the vine. Without Christ we can do nothing. But, abiding in Him, we bear much fruit; therein is our Father in heaven glorified. (John 15:1-10)

This freedom which is ours we have by virtue of the “calling” wherewith we have been called. This calling is no mere invitation to accept some proffered salvation; it is the efficacious calling which is life-giving by the Holy Spirit of life. Paul refers to this already in Chapter 1:6 where God is designated as the “One having called you.” This is a calling of God Who raises the dead to life, and calls the things which be not as if they were. (Ram. 4:17) It is the calling which is a link in the “golden chain” ofRomans 8:30. Here the links of the chain are: predestination-calling-justification-glorification! The calling is as sure and unchangeable as is God’s eternal election itself. (I Cor. 1:26-31) We make all diligence to make our calling and election sure. (II Peter 1:10) Paul had a good confidence in these Galatian brethren. It is rooted in their having been called in Christ Jesus. Paul himself is such a product of the efficacious calling in Christ. (Gal. 1:15)

Why is this placed here on the foreground? Why does Paul speak in connection with the walk of sanctification so emphatically of this calling in Christ unto liberty? Why does he remind these “brethren” of their calling? It is just as in Ephesians 4:1. There Paul exhorts the believers “to walk worthily of the calling wherewith they have been called.” Only when we see the exalted nature of our calling will we have the incentive to walk in all good works of love. Only when we know that we are justified by faith alone and. that his justification is ours because we have been efficaciously called unto faith, will we have the assurance that we are not “debtors” to live after the flesh. (Rom. 8:12) When we are called we are those who “are born out of God,” sons of God renewed after the image of God. (John 1:13) As such we have the “right” to become the children of God. Only thus do we have the right to walk at liberty, no longer to walk in sin, to live by the Spirit and thus walk in the Spirit and not in the flesh.

It is in this “calling” that justification and sanctification have their meeting-point in our life. Never is the one without the other. Here we see the Divine wisdom of the Cross. Christ became for us righteousness, sanctification, and complete redemption. (I Cor. 1:30, 31) Here the believer, walking in good works, glories only in the Cross. That the unbeliever can only be “under law” in all his attempts at morality is thus evident, isn’t it? But it is also evident that the believer is made free to walk in all good works by the power of Christ’s death and resurrection from the dead. It is, indeed, newness of life.

What wondrous grace is this calling! Take notice of it! Not the wise according to the flesh are called, not many mighty and great in the world, not many of noble birth. Why? Because God has elected the foolish things of the world to put to shame the wise. No flesh may glory in God’s presence. He that glories, must glory in the LORD, Jehovah our righteousness, whether this be in his justification or in his sanctification! And that is what the Galatians, and we with them, must have, as the anchor-point in our faith. We have been called unto liberty according to the eternal good-pleasure of God, and by His matchless, glorious grace. Amen!

In this calling unto liberty in Christ there is an implied precept of the Gospel. Here I must most emphatically warn any and every preacher, by the tender mercies of the Lord, not to place upon the congregation the hard yoke of the law. Do not haul into the back door what you have thrown out of the front door. Let your admonitions to the saints be and remain forever: precepts of the Gospel, anchored in the Gospel-note: Ye have been called unto liberty. We must admonish the congregation to reach out and grasp that for which they have been apprehended (grasped) in Christ Jesus their Lord. (Phil 3:12) The saints must most emphatically press forward in sanctification in such a way that it is not mere outward formal legalism, nor some mores of the moralist, but that it is: “what I now live, I live by the faith of the Son of God.” (Gal. 2:20) Also in Sanctification it must be quite evident that our life is Christ, the hope of glory! The walk of sanctification is one in which the believer says: Through law I died unto Law that I might live unto God and walk in newness of life. (Rom. 6:4) This newness of life is a newness wrought by the Spirit, and thus we bring fruits unto God. (Rom. 7:1-6) It is the covenant, the new covenant, written in our hearts by the Spirit. (Heb. 8:8-13; Jer. 31:31-34)

Now the danger is that in this walk of liberty we shall fall into the bondage of sin. Satan would tempt us, the world of unbelievers will entice us, and our own flesh, in which there dwells no good thing, allures us from our liberty in Christ. If Satan cannot succeed in alluring us in the lie of needing good works of law to be justified, then he will do all that is in his power to allure us to fall into his trap of having us use our Gospel-liberty as a spring-board to serve the flesh and the lusts which war against the soul. Satan then comes as an angel of light. He succeeds in assuring us that we can sin with impunity as Christians. Where sin abounds, grace does much more abound. Let us then sin that grace may abound. That seems to be the logical conclusion, but it is not the logic of the wisdom of God in His salvation of the Cross of Calvary. It is the logic of sin!

Paul raises a warning finger. And what a necessary warning for us who are ever like sheep to go astray. Do not make of the doctrine of grace a pillow for sin, to sin. comfortably. Ever there are the sins of anger, jealousy, the not walking according to the “law and the Prophets.” “Whatsoever ye would that men should do to you, do ye even so to them; for this is the law and the prophets.” These sins are bad enough as such, but when we would “use” our liberty in Christ for perpetrating sin, then it is doubly wicked. Do not do this, warns Paul: “only do not use your liberty as an occasion for sin.” Rather work out your salvation with fear and trembling, for it is God that worketh, energizes in you both to will and to do according to His good-pleasure.

SERVING ONE ANOTHER THROUGH LOVE (Galatians 5:13)

Here is the basic precept of the Gospel of grace! Paul adds a very positive commandment in this text. It is part of the “great commandment” which is as great as “thou shalt love the Lord Thy God.” We are to serve one another through “the love.” This is the well-known love which has been shed abroad in our hearts by the Holy Spirit. The Holy Spirit has been given us. That is gift. But the love is also gift of God to us, taking away the hatred for God and our neighbor. (Rom. 5:5)

Perhaps we do well to listen to what we read in I John 4:7. “Beloved, let us love one another, for love is of (out of) God.” That is the keynote also here. For “everyone that loveth is begotten of God, and knoweth God.” Such have eternal life abiding in them. He that loveth not knoweth not God, for God is love. (I John 4:8) And “if God so loved us, we also ought to love one another.” That is the deepest motif of this exhortation also here in Gal. 5:13!

But this love is one of “service” to one another. It is the mutual love for one another as fellow citizens of God, fellow-heirs of the grace of life. Loving each other we walk at liberty. We are not servants of sin, but very willing servants in the day of Christ’s power. It is a service where the shackles of sin have fallen from us. We are the captives, who were set free; we are no longer in the prison-house of sin. In God’s family we are loving each other, helping each other, praying for each other. Here we visit the dying and the sick, care for the poor and needy, give a glass of water in the Name of Christ.

This service is newness of life. It is not walking according to the oldness of the letter, but according to the newness of the Spirit. Here we see the law written not merely upon tables of stone with the finger of God, but upon the tables of the hearts. (II Cor. 3:3) Yes, here is the Lord Who is the Spirit, dwelling in the saints; and where this Spirit is, as he sheds the love abroad in our hearts, there is liberty. Here we are changed from glory unto glory as by the Spirit of the Lord.

O, the joy of loving service to the neighbor! 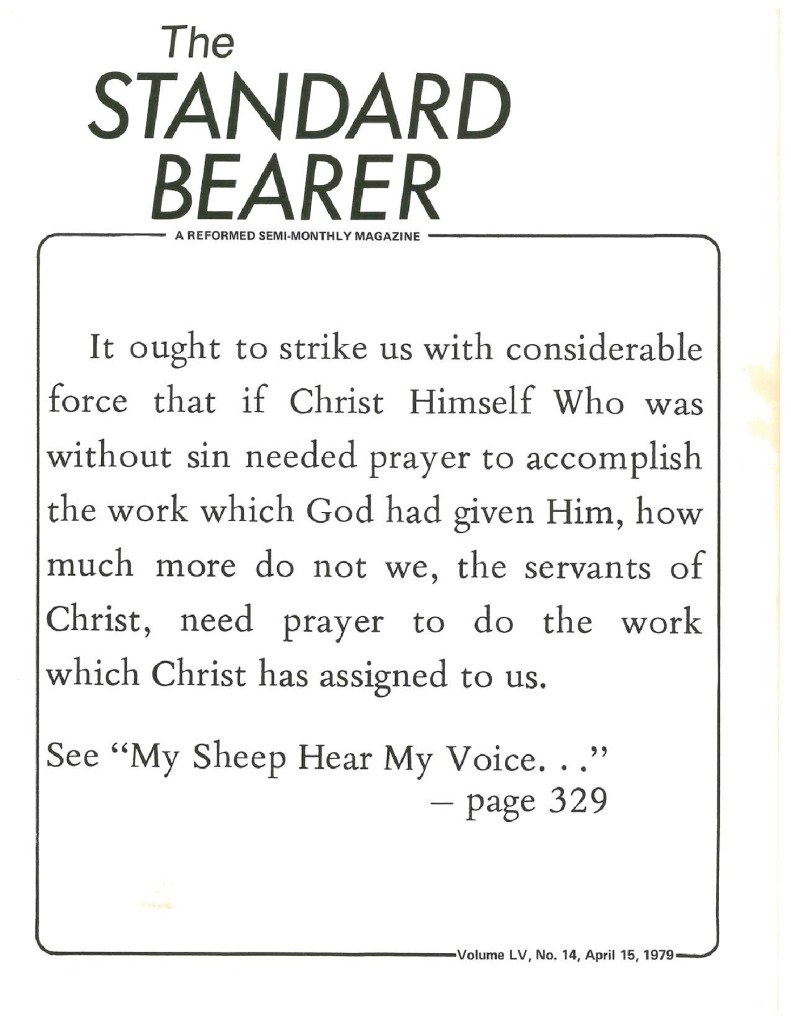