THE PERFECT LAW OF LIBERTY (Galatiaris 5:14)

Paul quotes here the sum and substance of the whole law. This is briefly stated in, “Thou shalt love thy neighbor as thyself.” James calls this the “perfect law of liberty.” We are to walk in our liberty in Christ to which we have been called efficaciously out of darkness into God’s marvelous light of grace, wherein God proclaims in the Ten Words, “I am the LORD thy God, who hath delivered you from Egypt’s (sin’s) bondage.” (Exodus 20:1) I have made you children of Sarah, Jerusalem above, ‘born of the Spirit; I have given you the Spirit which cries in your hearts: Abba, Father. (Gal. 4:6-7) Ye are no more servants but only sons. (Gal. 4:7)

No, we are not under law any more! Our relationship to the law of God has changed. We are under the ministry of righteousness, which has a glory of grace which far exceeds the ministry of condemnation and death. (II Cor. 3:7-10) For now the law is not written any more with ink upon tables of stone, but it is written by the ministry of righteousness upon the fleshy tables of the hearts by the Spirit of the living God! (II Cor. 3:3) Yes, we do have much to do with the law; a Christian is not antinomistic in his very spiritual nature! He does not live by the dictum: let us abide in sin that grace may abound! God forbid! The law is still the guide to our feet; but it is the guide to our willing feet. And the law, as we know it now, as the new commandment in Christ’s blood, is not grievous; it is sweeter than honey and the honeycomb. Into this law we gaze, look; upon it we meditate day and night. (James 1:25;Psalm 19:7-13) We now serve the Lord not in the oldness of the letter, but in the newness of the Spirit, as Paul writes in Rom. 7:6, “But now we are delivered from the law, that being dead (dead to) that wherein we were held; that we should serve in newness of spirit and not in the oldness of letter.”

There really is the wonder of God’s transforming and quickening Spirit where by we are metamorphosed from glory unto glory; we are brought in the way of daily conversion, progressive conversion, to be conformed more and more after the image of God, in the putting off of the old man, and the putting on of the new man. And this putting on of the new man is to be understood as the Heidelberg Catechism states it so very clearly and scripturally, when it calls it, “a sincere joy of heart in God, through Christ, and with love and delight to live according to the will of God in all good works. ” (Ques. 90) Here is the must of performing, of doing good works; it is the must of the being a “new creature, ” “created in Christ Jesus unto good works, which God has before prepared that we should walk in them.” (Eph. 2:10) This is not the “must” any more of the “letter which kills,” but it is the “must” which is ours because we have looked at the glory on Moses’ face, and have seen the end of the glory of the Old Covenant which perishes in that greater glory of Christ’s transfiguration on the mount. We have seen the “exodus” which Christ fulfilled on the Cross and heard by faith the full implication of the “it is finished.” (Exodus 34:33,35; II Cor. 3:12f.f.; John 19:30) The vail has been taken from our hearts when we read the law; we see Christ the “end” of the law for righteousness to every one who believes. (Rom. 10:4) This is the “Finis” of the law for righteousness to every believer!

We have, indeed, been called unto liberty!

In this liberty we must stand, unmoved, from the hope of the Gospel. We must stand in our liberty when we read the law and walk in liberty of putting on of the new man in Christ. For the law is the law of liberty. The law does not terrify our consciences in Christ. It is the great incentive to run the race set before us, and to enter into the strait gate and the narrow way. (Matt. 7:13) Few there be that find this gate of “liberty.” It is the gate. of grace which sanctifies the filthiest sinner, and cleanses the conscience from dead works to serve the living God. (Heb. 9:14)

Twice our fathers warn us definitely to flee these dead works wherein our conscience is not cleansed.

We refer, first of all, to Article 23 of the Belgic Confession, where we read,

“. . . and verily if we should appear before God, relying on ourselves, or on any other creature ever so little, we should, alas! be consumed. . . .”

Secondly, we refer to Article 14, where we read,

“. . . moreover, though we do good works, we do not found our salvation upon them; for we do no work but what is polluted by our flesh, and also punishable; and although we could perform such works, still the remembrance of one sin is-sufficient for God to reject them. Thus we would always be in doubt, tossed to and fro without any certainty, and our poor consciences continually vexed, if we relied not on the merits of the suffering and death of our Savior.”

We do well to take these warnings to heart. We have been called unto liberty, in Christ. We must indeed put on the new man also, and not merelycontinually put off the old man. Even in putting off of the old man we walk in our liberty of justification, when we have “a sincere sorrow of heart, that we have provoked God by our sins; and more and more (the longer the more) hate and flee them.” (Heid. Cat., Question 89) We stand in relationship to the law as unto the law of liberty. Let us not allow all the powers of hell to remove us from this great liberty.

Yes, the law is the perfect law. (James 1:25) Paul calls the law elsewhere, ‘”the good, the acceptable, the perfect will of God.” (Rom. 12:1-2) The law of God is perfect in that it converts the soul in such a way that we “begin to keep all of God’s commandments.” Thus we are an acceptable sacrifice unto God. Conversion is not piece-meal, now this commandment and then that commandment. That is also the approach here by Paul when he says that “all the law is in one word: thou shalt love thy neighbor as thyself” (Gal. 5:14) It is the characteristic of ‘the legalistic mind to count’ commandments. The Jews were past-masters in this art of counting the commandments. “The scribes declared that there were 248 affirmative precepts, as many as the members of the human body; and 365 ‘negative precepts, as many as the days in the year, the total being 613, the number of the letters in the decalogue.” (Vincent) But this did not make for edification. They really did not learn to see what was the “great commandment.” They did not see the spiritual nature (poia entolee megalee en tooi nomooi) of the first and great commandment. They could really never see the perfection of the law requiring all our heart, mind, soul, and strength. The way to Jewry is not long!

Such is the perfect law of liberty wherein we stand, and which has been inscribed in the tables of ourreborn, fleshy hearts.

ALL THE LAW FULFILLED IN ONE WORD. (Galatians 5:14b)

The Bible does not make the way of obedience in Christ difficult. We do not need to memorize the names of many saints and popes to be obedient. And we do not need to ask after greater and lesser commandments and fall into moralistic and legalistic casuistry (case studies). When we have made the count as did the rich young ruler and exclaim, “all these things have I kept from my youth,” then Jesus gives us the backward view of the tenth commandment and teaches us the great lesson of the sin of sinful “lusts.” (Matt. 19:20; Mark 10:20;Luke 18:21; Acts 26:12) The sin of the lust after money; the deeply ingrained sin of idolatry which does not trust and love the Lord was his Jesus taught him the law in one pin-pointed word. The Bible surely makes the mirror of the law easy to see, so that we see our “natural face in a glass.” It is rather difficult not to remember who we saw in that mirror! We saw the man and the woman, the imperfect sons of liberty, in the perfect law of liberty, and we saw that we all are still imperfect by the “standard” of the law of liberty, which law is fulfilled in one word: thou shalt love thy neighbor as thyself! Thus Jesus interprets this law also in Matthew 7:12, “all things whatsoever ye would that men should do to you, do even so to them: for this is the law and the prophets.”

Now the law “is fulfilled” (pepleerootai) in one word. There is not one single commandment in either table of the great decalogue, which does not receive its full jot and tittle under this formula. The last drop of water fills the pail in each case. Nothing need be or can be added. Paul placed this formula on the foreground here. When the Galatian brethren and sisters will take a look into this law of liberty they will detect with what spiritual shackles of sin, all legalizing conceptions of the law binds them. They may then boast of being “under law,” but they are not standing in the law of liberty; the perfect law which makes them break radically with their sins. They boast: all these things we are keeping. They are rich and enriched, and do not know that they are wretched, poor, blind, and naked. They never taste the sweetness of having Christ come and sup with them. They do not experience the fellowship of God’s new covenant of grace. The love of God is not perfected in them. (Rev. 3:17-20; I John 4:17-18) Does not Paul say in Rom. 13:8-9, “Owe no man any thing, but to love one another; for he that loveth (is loving) hath fulfilled the law”?

This is the royal law of the kingdom of heaven! Only those who keep the royal law of the king shall inherit the Kingdom of God. He who promulgates this law in the New Testament is the one who says: But I say unto you. He is the Lord of glory. He judges righteously according to the law of liberty. He asks: did you walk in the liberty of Christ? We must not have the faith of our Lord Jesus Christ, the Lord of glory; with respect of persons. One is our Lord. There is no respect of persons with this King of His law!

All is fulfilled in one word! This one Word is held before our face each Sunday morning when the Decalogue is read. And that Decalogue says that God does not desire works which tire founded on our imaginations, or on institutions of men, but that they must be works which proceed out of true faith in Christ, receiving all these works from Him, and which are according to the royal law of liberty in Christ, and which are fall to the glory of God’s sovereign and mighty grace! 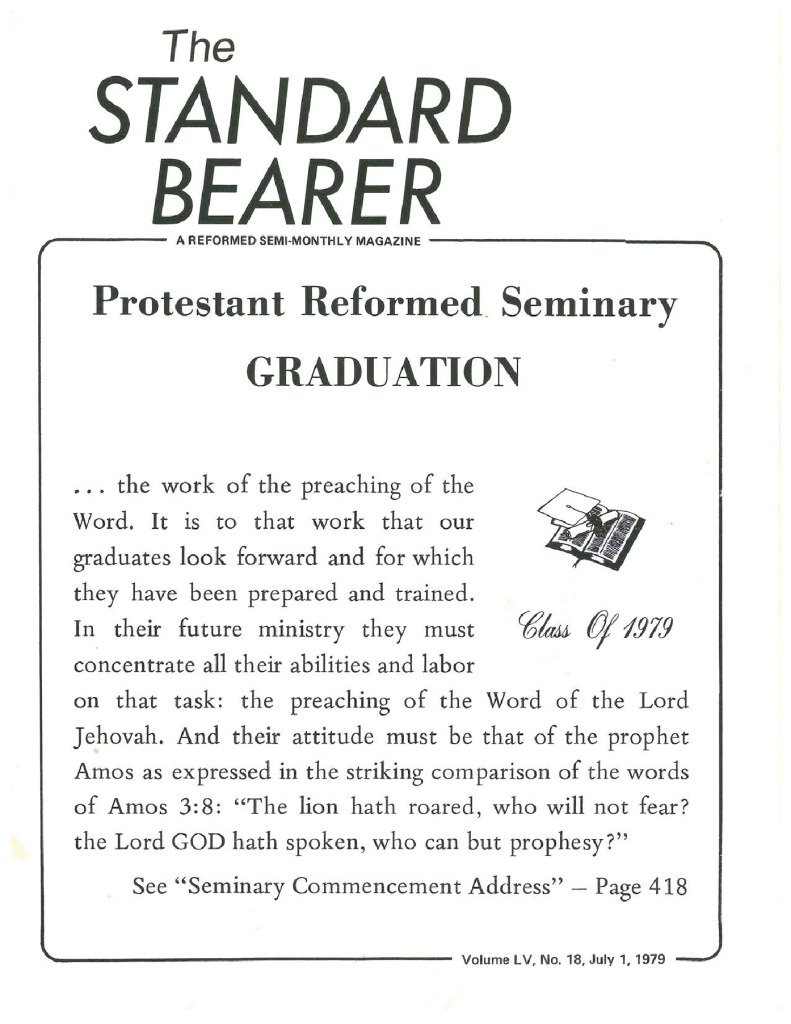