2. This Cross is the Cross of the risen Savior, the Lord of glory (I Cor. 2:8). He is now made of God both Lord and Christ by His resurrection and ascension (Acts 2:36). All the house of Israel must know assuredly that God has made this crucified Jesus both Lord and Christ, Who is placed over all things. He is our Lord! He is Lord of Paul and has absolute lordship over the entire household of faith. O, how often Paul speaks of Jesus, the risen and glorified Christ, as being “our Lord” (I Thes. 1:3; 2:19; 3:13; 5:9; Gal. 6:14, 18, etc.). He is given to us to be the head of the church over all things (Eph. 1:22). He is legally our Lord because He has bought us with His blood and has made us His own precious peculiar treasure forever (Gal. 2:19-20). We were crucified with Him. We were given to Him by the Father from all eternity, and it is the will of the Father that He should lose none of us, but that He should raise us up in the last day (John 6:39-40).

3. Emphatically He is “Jesus Christ.” He is the historical Jesus, born from a woman under law in a lowly cattle-stall, a truly humble birth. And He was named JESUS by the angel Gabriel to Mary (Luke 1:31). Of the kingdom of this Jesus there shall be no end. He shall truly and surely save all His people from their sins. He is Immanuel, God-with us (Matt. 2:21-22). And this is the name which was blazoned on the Cross of Jesus, while He was numbered with the transgressors. It was written in three languages, that all the world might read it as they passed by! Savior of the world, Light of the nations is He! He is also “Christ” the Lord, the promised Messiah, the One to come. He is the anointed of God to sit upon God’s throne in Zion forevermore (Psalm 2:6-8).

4. In this Cross of Jesus will be Paul’s own ground of boasting. It is a glorying in Jehovah-Tsedaquanu, the Lord our righteousness (Jer. 33:16). He will place this boasting over against all the hollow and vain boasting of those who are really not the circumcison at all (Phil. 3:3), but who are the “concision,” a mere mutilation of the flesh. Paul will make his boast on the solid ground of the “rock” on which Christ builds His Church, and against which the gates of hell will never prevail. He will boast of the outer and chief cornerstone on which the entire building of the Church rests in all her bulwarks and palaces. For in the Cross of Christ Paul’s legal and spiritual relationship to God, to the Church, and really to all things has changed. He is not a slave any more, but a son, and heir of all things! What a boast on solid ground, a boast which will not be put to shame in the day of Christ (Matt. 16:16-19, Eph. 2:20).

Now all things have become new. He now knows no one according to the flesh any more, nay, not even Christ Jesus Himself (II Cor. 5:16-17). God was in Christ reconciling the world (kosmos) unto Himself. Now we stand under the ministry of reconciliation. And, therefore, Paul makes no overstatement when he cries out triumphantly, of the Cross of Christ, that “through which the Kosmos (world) is crucified to me” (Gal. 6:14). Paul stands in a new relationship to the entire kosmos of God, both in heaven and on earth. In the Greek text Paul places “me” on the foreground. The world is crucified to me. This indicates that the crucifixion of Christ has Cosmic proportions. It will result in the city four-square, where heaven and earth shall be united: the tabernacle of God with man! Therefore it indeed entails heaven and earth and all the relationships of God, angels, and men. From now on the starting-point, the center of all things in heaven and earth, is the Cross of Jesus Christ. This was not only an earth-shaking event, an act of God’s grace, but it also shakes the heavens to its very foundations and present structure (Haggai 2:6; Heb. 12:26-28). The entire curse and vanity which is upon all creation in heaven and earth is removed, so that now all things have a right to be renewed with eternal youth and pristine freshness and beauty of God’s grace.

Yes, all the fulness of the Godhead dwells in Christ bodily. Through this Christ, Who has the pre-eminenceover all things, God has reconciled all things by the blood of the Cross, and thus Christ has made the peace of reconciliation (Col. 1:19-20). Christ came to take away the sin of the world, the one great world-sin which started in heaven (John 8:43-44) and which entered into the world (kosmos) through one man, Adam (Rom. 5:12; I Cor. 15:21). Thus the world was crucified to Paul, and to all the multitude of the children of Abraham, the free-born sons of Sarah, born from above.

But the text here adds: “and I unto the world.” Paul is also crucified unto the world. He is no longer under the law-principle, the weak and beggarly principles of this world. This worldly ethics and moral standards, aims and purposes are his no longer. His is the privilege to stand on higher ground and on holier ground. His is not, we repeat, the position of a servant, but it is that of being a son, an heir of God and joint-heir with Christ. What a sure ground of boasting which calls for a new norm of measuring. What Paul now lives he lives by the faith of the Son of God, Who lived and died and arose again. He stands in the new world of the heavenly in the midst of the earthly (Eph. 2:1-10).

THE NEW NORM “KANON” ACCORDING TO WHICH WE WALK (Galatians 6:16a)

Paul not only himself walks according to the new “norm” in Christ, but he would have all the saints walk according to “this rule.” Are they not created in Christ Jesus unto good works which God has before prepared that we should walk in them (Eph. 2:10)? The free-born sons of Sarah do not walk in a balance-act between antinomian licentiousness of the would-be-righteousness justified boaster, and the righteousness of the legalistic neonomist, the free-born sons walk in newness of life both legally (justified) and spiritually (sanctified). That newness of life is the entire goal and aspiration of their life (Phil. 3:12-14). The great aspiration is to be found in Christ, not having one’s own righteousness, which is so much refuse and dung, but constantly to press forward to grasp that unto which they have been powerfully and graciously grasped of Christ Jesus. Such is newness of life which calls for a new “rule,” more exalted than mere circumcision of foreskin. It is to bear fruit unto God, in which He as our heavenly Father is glorified (Rom. 8:4; John 15:5-8).

This is the new Canon!

Flesh means nothing! The spirit gives life. Let it always be remembered (John 6:63)! And if any man teach something else than this new rule for Sarah’s free-born children let him be anathema, even though he were Paul or Gabriel from heaven (Gal. 1:8-9).

PEACE AND MERCY UPON THE ISRAEL OF GOD (Galatians 6:16b)

Paul makes here an illusion to Psalm 125:5, where we read “…but peace shall be upon Israel. They are like mount Zion which cannot be moved forever.” There are those who turn aside to crooked ways. They do not put their trust in Jehovah in the sacrifice on mount Zion. These do not overcome in the blood. Hence, they turn aside to crooked ways, and will be led forth to perdition with the workers of iniquity. Upon these comes the anathema of God, just as upon the false preachers who disturb the Galatians (Gal. 1:7-9). They are not the Israel of God, and upon such is not the blessing of peace with God, neither in the Old nor in the New Testament. For the Israel of God are not the sons of the flesh, sons of Hagar, but the sons of Sarah, Jerusalem above.

Upon this true Israel is “peace and mercy.” Here is the mercy, which God shows in thousands of generations of those who love Him and keep His commandments. These love the Gospel and walk in newness of life (Ex. 20:6; 34:7; Ps. 89:34-37; Romans 11:28). It is the never-failing mercy of which Israel sang in their choicest music (Ps. 136:1 ff). It is new every morning (Lam. 3:22-23). And the fruit of this mercy is the peace of God which passes all understanding. It is peace with God in justifying grace and mercy (Rom. 5:1). It is peace in the blood of the Lamb, Who was delivered for our offenses and Who was raised for our justification (Rom. 4:23-25). It is peace with God in the knowledge that if we are saved by Christ’s death, we shall much more be saved by His life. For we are never separated from the intercessory prayers of our advocate with the Father, Jesus Christ the righteous.

Such is the peace upon Israel, the Israel of God.

Paul gives firm notice that no one shall trouble him as the God-called gospel-preacher any more, henceforth! The phrase in Greek translated “trouble ye” is a peculiar term in Greek. It is kopous-parechetoo. It means to be the author of, or to cause one to have evil. It is simply evil: intent to hurt. And there is deviltry back of it. Thus Judas was such an instigator against Mary when she anointed Christ with very precious ointment against his burial (Matt. 26:10; Mk. 14:6). See also Luke 11:7; 18:5. Paul is here speaking as an apostle, who was called not from men, nor by a man, but through Jesus Christ and God the Father, Who raised His Son from the dead. He stands in the service of Jesus, Who has been made both Lord and There must come an end to this seemingly needless, endless defense of his apostleship, and the discrediting of his approved credentials. This is nothing less than an attempt to assassinate him as a bona fide preacher of the Gospel of Christ.

Paul uses a great argument of fact to convince his hearers and to shut the mouth of evil agitators. He is an old battle-warrior for the Gospel’s sake. He is a marked man, a branded man, as was a runaway slave whose master had put on him with hot irons the “stigma” of a slave. Paul bears in his body the “marks” of the Lord Jesus (II Cor. 11:24-25). These were great welts and deep scars from the scourgings, beatings, and stonings which he had endured for the Gospel’s sake. In him was being filled up what was lacking in the sufferings of Christ (Col. 1:24). Paul endured all things for the elect’s sake (II Tim. 2:10). These scars are marks of honor of a real preacher of the Gospel, who was persecuted for the sake of the Gospel, and whose steps were hounded everywhere. Yes, these “marks” which Paul bears in his body show him to be the earthen vessel, weak, discouraged, pressed down, bearing in his body the dying of the Lord Jesus Himself. And through his preaching, which was a stumblingblock to the Jew, God’s power to save those who believed was revealed (I Cor. 1:18, 25; Gal. 5:11). Henceforth, let no man trouble him by denying his apostleship or his message from Christ. Paul utters here the holy impatience of a weary yet genuinely sent preacher (Rom. 10:14-15). 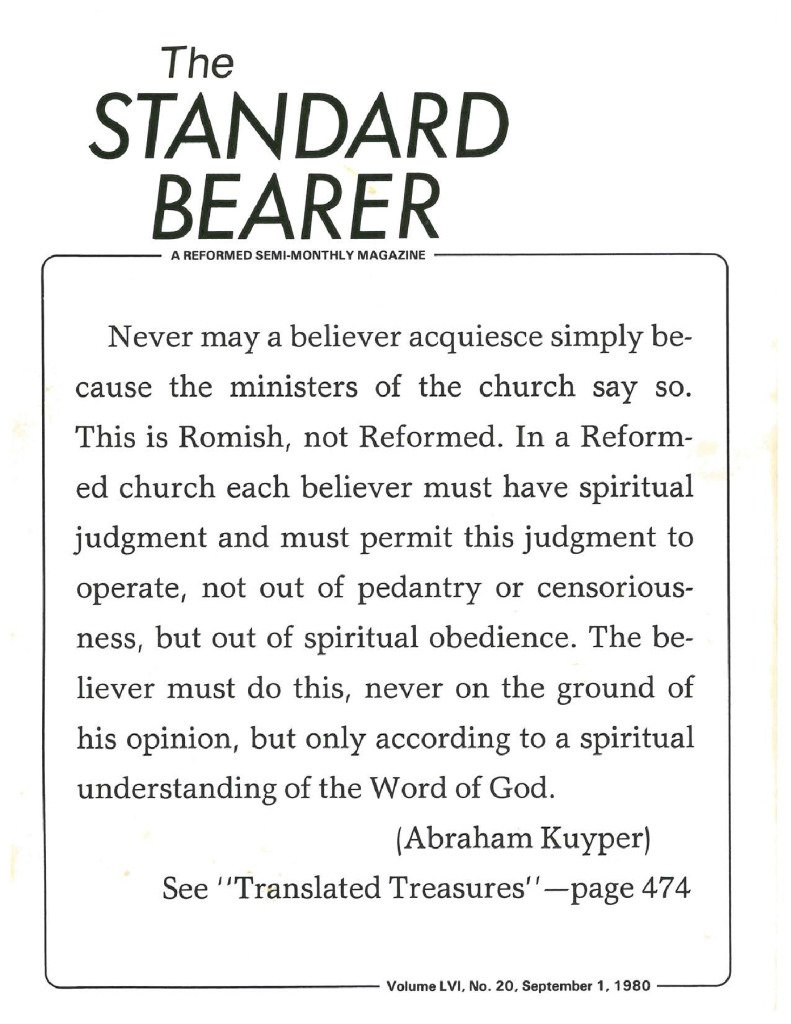