CHRIST HAS MADE US TRULY FREE FROM SIN AND GUILT (Gal. 5:1)

Paul now comes to the great “therefore.” Stand fast therefore, says he. In the light of all that the law teaches concerning the two sons of Abraham, one a bond-son and the other a freeborn son, we must identify ourselves as being sons of Sarah, of Jerusalem above. We are not under law, under sin any more. We are now free with a freedom wherewith Christ has liberated us. And since we are not sons of the bondwoman, Hagar, but of the freewoman, Sarah, we are born from above by the Spirit and we are indeed freeborn, and ever remain in God’s church.

Here is the great precept of the Gospel of liberty. Here is the unique freedom from sin, guilt, and corruption. Christ has become for us wisdom of God, righteousness, sanctification, and complete redemption. We must not try to stand in any brand of liberty. Those who do not stand in this liberty, holding fast to it by faith, clinging to the Gospel-teaching, must needs become legalists or antinomists. The former have a “yoke of bondage,” the latter are men of sinful license, who use their liberty as an occasion for the flesh to revel. In this “stand fast” we do not have a legal demand of law, but we have the fundamental precept which flows from salvation in Christ itself. It is our “reasonable service” in Christ. (Rom. 12:1) This is the very logic of grace which cries out, “God forbid.” (Rom. 6:1, 15) It is the impossibility to once more place oneself under the principle of law as well as to walk in sin that grace may abound. Justification and sanctification are both ours in the blood of Christ, His death and resurrection. Both Christ’s righteousness and holiness are ours in the satisfaction of Christ. Our liberty is that we are free from both the guilt and the corruption of sin. (Heid. Cat., Questions 60, 61, and 64)

However, the apostle is here interested in the “yoke of bondage” of the law, which would rob us of our justification by grace through faith. And that is an intolerable yoke. That yoke was Egypt’s bondage for Israel of old. From this cruel bondage God delivered Israel, under the blood of the Passover lamb in the night of nights when Israel went forth triumphantly, marching out of Egypt. And then comes the great “precept of the Gospel” to Israel in the words of the Covenant, “I have delivered you, I am your God, the LORD.” Now walk at liberty and have no other God but serve only your great Covenant God and deliverer. (Exodus 20:1; Deut. 5:6) Yes, yes, here we have the great precept of the Gospel in the Old Testament! And it is read each Sunday morning in our public worship service. It does not put us under a “yoke of bondage” once more at all, but it is the royal law of liberty for erstwhile captive slaves, you and me. Hallelujah, Amen! And the ten commandments say, “Stand, therefore, in the liberty whereby Christ has made you free.” Never, never forget that I have delivered you in the blood of the Lamb, slain from the foundations of the earth. My little lambs in Egypt were but a type of the Lamb of God which carried away the sin of the world.

People of God, let no one bewitch you with enticing words! The giving of the law is connected with Calvary’s fulfillment of the law.

There are two parts to this precept here in Galatians 5:1. They are two sides of the same coin. On the one hand we must stand in our liberty. That is on the foreground. Really, when we stand in the liberty wherewith Christ has made us free with all our heart, mind, soul and strength, then we will be free; and are fleeing all yoke of legal bondage. We then cling to the Cross of Christ, where through law we died unto law, that we might live unto God. (Rom. 7:6; Gal. 2:17-19) And so we do not become entangled once more under a yoke of bondage, and tempt God. (Acts 15:10, 11)

Once more we must not become “entangled” with the yoke of bondage. We must not go back to zealously keeping days, months, times, and years from a mere law-principle. We are not sons of Hagar, Sinai, but we are born from above and are free. We keep the sabbath from the principle of being free to serve the Lord on His feast-day, set aside for us. Yes, yes, that is God’s precept of the Gospel. It cannot be ignored with impunity. (Heb. 10:25-31) It is a terrible thing to fall into the hands of the living God. Such is the lot of all who count the blood of Christ a common thing, and do despite unto the Spirit of grace. But heeding the precepts of the Gospel leads to freedom, is freedom, is holding fast our freedom in Christ, and never, never becomes a “yoke of bondage,” for it is the light burden and the easy yoke of Christ. (Matt. 11:28-30) It is the commandment of Christ which is not grievous. (I John 5:3) Thus we never get entangled in the yoke of bondage, but stand fast in the liberty wherewith Christ has made us free!

CHRIST PROFITS NOTHING TO THOSE WHO DESIRE TO BE UNDER LAW: CIRCUMCISED. (Galatians 5:2-4)

Paul makes a very solemn declaration here which amounts to an ultimatum. Writes he, “Behold, I Paul say unto you, that if ye be circumcised, Christ shall profit you nothing.” (Gal. 5:2) There are three things in this strong sentence which call for our attention. In the first place, that he begins by saying “behold.” The term in Greek in the New Testament is “ide.” It is used at the beginning of sentences as an utterance of one who wishes that something should not be neglected by another. (Matt. 26:65) It is used by Caiaphas in his judgment hall when he would condemn Jesus for what he called “blasphemy.” And it is employed by the Pharisees when they called Jesus’ attention to the purported sabbath-breaking of his disciples: their plucking ears of corn on the Sabbath when they were hungry. (Mark 2:24) Paul would have the Galatian readers take particular notice of what he here is saying. It must sink deep down into their hearts. Secondly, notice that Paul says, “I, Paul, say unto you.” I, Paul, the called apostle of Jesus Christ not by men, but by God himself, (Gal. 1:1) separated unto the Gospel from my mother’s womb, (Gal. 1:15; Rom. 1:1; Acts 9:15), I say unto you, Do not take this lightly, brethren! Thirdly, notice this statement is one which partakes of an ultimatum; there is finality in it. Anyone who is circumcised, after he has become a believer, by such an act of circumcision comes to stand in the legal status before the throne of God, the judge of heaven and earth, as not being in Christ’s atoning work on the Cross! He is not righteous before God and an heir of everlasting life. Christ profits such a man in nothing. All the merits of Christ and the benefits of Christ for such a man are zero. Paul does not merely say: Christ shall not profit him. Not at all. He says Christ shall profit you in nothing. The Greek term is “ouden.” In Romans 8:1 we read that there is condemnation in reference to nothing (ouden) to those who are in Christ Jesus. Paul lists the catalogue of this “ouden” in Rom. 8:31-39. All things work together for good to those who love God, the called according to His purpose of election. But here all that is attributed to the believers are denied to those who “are circumcised.” They are totally under law!

Paul enlarges upon this in Gal. 5:3. He repeats this more strongly and with great clarity and emphasis. He repeats with great protestation. He becomes the witness in the witness chair in God’s court. He solemnly affirms here something to every man, who becomes circumcised: they are totally under the, law, and under the whole law of Moses with all the impact of, “do this and thou shall live”, and “cursed is every one that continueth not in all things which are written in the book of the law to do it.” For circumcision is the Old Testament bloody sign which said that the true sacrifice had not yet been brought, and that the righteousness which is ours by faith had not yet been realized! It said, in effect, that Christ had not yet died. This was indeed accounting the blood of Christ a common thing, a treading under foot the Son of God, and doing despite unto the Spirit of grace. And such have no profit in Christ, yea, they are in the legal status of being servants and not sons, who have the Spirit crying in their hearts: Abba, Father. This brings these Galatians and all who desire to be under law up short. It should stop them in their tracks!

Yes, the whole law these circumcised are debtors to do. We, who are in Christ and have the Spirit, are not debtors unto the flesh to serve the flesh. But such, who would be circumcised and return under law, are indeed debtors to serve the flesh. They are not free, but they are in spiritual bondage. The law cannot make alive, and the law cannot give the power to do the law. These did not die to law through law to live unto God. Such are fallen from Christ, from grace, who would be justified by law. They have wholly come to stand as those for whom Christ is of “none effect.” There is not any power of grace and of the Holy Spirit to save them, neither is there any atonement for such!

Well may the Galatians and we distant ourselves from this law-righteousness in all its forms. A little leaven leaveneth the whole lump. Beware of the leaven of the Pharisees. (I Cor. 5:6; Matt. 16:6, 11; Matt. 23:3, 13)

OUR ONLY HOPE AND EXPECTATION OF RIGHTEOUS (Galatians 4:5, 6)

Paul draws here a very strong and marked contrast in these verses between the true believers and those who have no hope in Christ. Writes he very emphatically, “for we expect the hope of righteousness out of faith”! What a beautiful, concise statement of our position in grace! In the first place, Paul here puts himself in the class of the entire body of Christ, the totality of all believers, who belong to Christ, and who are, therefore, the real Israel of God, the spiritual children of Abraham. This is a glorious confession of faith. It is the key-note of the confessions of the church, “We confess with the mouth. . . .” And in this confession we are saved. Furthermore, he speaks of the earnest expectation of the church. The term in the Greek is “ap-ek-dechometha.” It means to assiduously and patiently wait for the final salvation and final justification in the day of Christ. Thus it is employed in Romans 8:23 where Paul speaks of the church’s waiting for the final, public adoption of sons, when all creation shall be delivered from the bondage of corruption to the glorious liberty of the children of God. 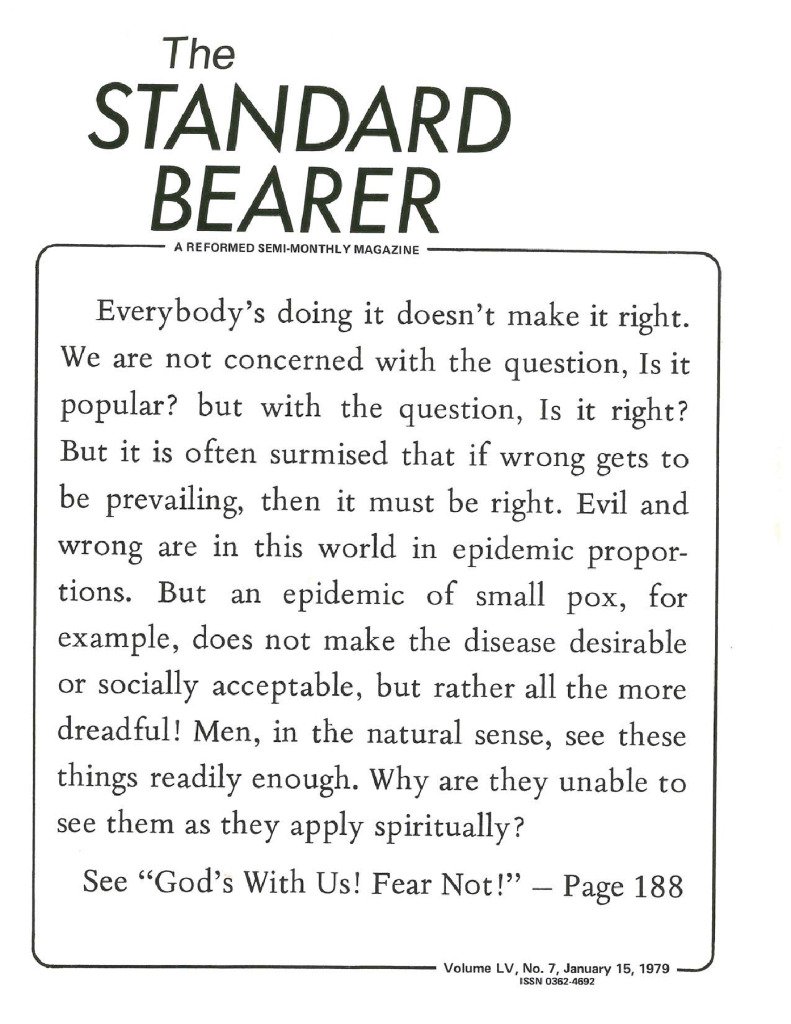