The Galatians must not ever be duped into thinking that they can play with the fire of erroneous doctrine, which denies the Cross, and not be seared and charred in the righteous judgment of God. God will not permit any strange fire on the altar of His worship. Let it not be forgotten that a “little leaven leaveneth the whole lump.” This proverb is employed by Paul also in I Corinthians 5:6. Here the “leaven” refers to the principle of sin in the congregation, the sin of adultery. If this would be permitted to go unchallenged and uncensored in the congregation, the congregation would think that they could break every commandment with impunity. For the law is one. (James 2:10, 11, 12) Here Paul uses the proverb not merely to indicate that it takes just a few false ministers to corrupt the gospel truth, but he means that the principle of law, the “do this and thou shalt live” as a rule for justification, is perhaps viewed as a small departure. The matter of circumcision may not yet encompass the entire spectrum of doctrine in a clearly articulated form, but as surely as day follows night, this principle will work through the entire structure of the Gospel-truth, and we will have lost our liberty in Christ completely and forever! Just as the teaching of the truth of the Gospel of justification by faith leads to the keeping of the commandments of the Lord from true faith and fervent love, so the principle of law can only stifle all spontaneity of godliness completely. Strange as it may seem, legalism in all its forms has in it the principle of atinomism. Only where there is an earnest appeal to the tender mercies in Christ Jesus, is there a strong motif for the non-conformity to the world and the transformation in the renewal of the mind, so that we approve what is the good, the acceptable, and perfect will of God. Here the soul glories in the “logikee latreian” (reasonable service) in Christ Jesus. Here we see the leaven of the fear of God, the logical, the spiritual logic of godliness which proceeds from thankfulness!

Let the impact of this passionate appeal of Paul sink deep into our legally-inclined, sinful hearts!

Stand, therefore, in the liberty wherewith Christ has made us free, as the children of Sarah, the free-woman, Jerusalem above.

It is because of this little leaven that we should be doubly careful with any ecclesiastical pronouncements concerning the walk of godliness, that, even in our nomenclature, it be clearly stated that we are walking foursquare in the liberty in Christ, and that we do not allow any legalistic leaven to seep through and spoil the whole lump of doctrine and life!

Let us run well, and let none persuade us with a persuasion which is not of the Lord!

PAUL’S STRONG AND ABIDING CONFIDENCE IN THE LORD CONCERNING THE CHURCH (Galatians 5:10)

The gates of hell will not prevail against the church! (Matt. 16:18) That is the anchor which holds in every situation. The Lord knows them that are His. (II Tim. 2:19) This is the will of Him that sent me, that of all which He hath given me, none should be lost, but that I should raise them up again in the last day, says Jesus to the unbelieving Jews of his day. (John 6:39, 40)

When Paul writes the seemingly contradictory statement here that he is ever confident concerning the Galatians that they will not be otherwise minded, that they will not depart from the truth of the Gospel of justification by faith, we must bear in mind that he is not really contradicting himself. Yes, he wrote in Galatians 4:11, “I fear for you, lest I have toiled in vain.” That was when he looked at the actual situation from the viewpoint of the reports; however, even then he never really despaired of God’s work in them. That places the entire situation on the higher ground of God’s unchangeable faithfulness to His own dear, redeemed children.

Only thus can be understood Paul’s strong and emphatic assertion of his confidence in the Galatian churches that they shall not be moved from the hope of the Gospel at all. They have been moved momentarily by these blowing winds of error and deception (Eph. 4:14) but they shall basically stand in their liberty in Christ Jesus. They shall be none otherwise minded. In their deepest mind, their “phreen,” they shall all stand unitedly, as fellow-athletes in the truth of the Gospel. (Phil. 1:27) Their anchor holds sure and steadfast in the temple, within the vail. (Heb. 6:19, 20) Paul says here, according to the Greek perfect tense (pepoitha) that up to the present moment he has really held this persuasion in his heart concerning these Galatian churches. Yes, they had been troubled, but not in such a degree that their basic conviction concerning the liberty in Christ had been lost. For this is not mere human boasting in man, an attempt to bolster up some fagging spirits in a lost cause, but it is a sure conviction “in the Lord,” Who gave His life a ransom for our sins. And so these Galatians, who are free-born sons in the Lord, cannot be brought to another mind in regard to any point (ouden) of the Gospel message. It all stands in their mind like the rock of Gibraltar. What a glorious confidence in the battle with all error in the church. Beware, O gates of hell which would prevail greatly. (katischusousin) (Matt. 16:18) Paul wields the key power of Christ in the preaching, which opens and no one closes. (Rev. 1:18, 19; Rev. 3:7, 8) No one can pluck the sheep out of the hand of the Father, nor out of the hand of the good Shepherd, Who laid down His life and took it again. (John 10:27-30)

THE JUDGMENT UPON THOSE WHO DISTURB THE SAINTS (Galatians 5:10b)

We should observe that in the Greek text Paul speaks emphatically of the judgment. (to krima) This is not merely a judgment of God, such as comes to the church in the just pedagogical dealings with His people whom He loves (Heb. 12:5-11), but Paul is speaking of the final and irrevocable judgment which falls upon those who willfully and knowingly reject the Gospel, who count the blood of Christ an impure thing, and who do despite unto the Spirit of grace, and trample underfoot the Son of God afresh. It is the vengeance of God Who says: Vengeance is mine, I will recompense, and Who also says: the Lord shall judge His people. (Deut. 32:35; Psalm 135:14. Cf.Hebrews 10:26-31) It is because of this judgment that we read in the Bible “It is a fearful thing to fall into the hands of the living God.” (Heb. 10:31) And, again we read, “our God is a consuming fire.” (Heb. 12:29)

That Paul did not fall into this terrible judgment but received mercy, even though he had persecuted the church of God beyond measure, was because he had done it ignorantly in unbelief. (I Tim. 1:13) This same Paul had pronounced the curse upon anyone who preached a Gospel differently from what he had preached. Yea, what these false teachers were preaching was not “another Gospel,” but it was merely an attempt to subvert the faith. Upon all such, be they Paul himself or even an angel from heaven, Paul pronounced “anathema.” (Gal. 1:8, 9) Here Paul has such a one who disturbs the church in mind. It really makes no difference who he is. Paul writes “whosoever he be.” There is no respect of persons with God in His just judgment. (Rom. 2:11; Eph. 6:9; Col. 3:25; James 2:1) Such a one will bear the judgment, which God has in store for such disturbers of His people, who are the apple of His eye. God has a special place for the false prophets, for those who love and make a lie. (Rev. 22:15) Moses had already warned Israel against “adding to” or “taking away from” the words of the Lord spoken by him from the mouth of the Lord. (Deut. 4:2) And Jesus reiterates these words of Moses to John, the Apostle, on the island of Patmos. (Rev. 22:18, 19)

For other foundation can no man lay than that which is laid, which is Jesus Christ!

THE MOST INCREDIBLE SLANDER OF PAUL’S PREACHING REFUTED (Galatians 5:11, 12)

It was told to the congregation and others that Paul himself was still preaching that one had to be circumcised first to become a believer in Jesus Christ and be saved!

Incredible? Yes, that this was affirmed! But Paul must have known the; things whereof he here speaks to the Galatians.

They did not merely affirm that upon one occasion Paul had had Timothy circumcised “because of the Jews who were in those parts: for they all know that his father was a Greek.” (Acts 16:1-3) What these calumniators willfully overlooked was that, when it was a question of whether the “truth of the Gospel” shall stand, Paul does not give place to them, “no, not for an hour.” He refuses to yield to the pressures that Titus, the Greek, be circumcised. He does not yield an iota to those who came “to spy out of our liberty” in Christ Jesus. (Gal. 2:1-4) Heedless of the facts, these false teachers circulate the fable that Paul was still “preaching” (eti kurussoo) circumcision as a way of salvation! To what great lengths will not the enemies of the Gospel go to propagate their lie, as being the way of salvation!

What motivates these calumniators?

They are enemies of the Cross of Christ!

They misinterpret Paul’s becoming a Jew to the Jews and a Gentile to the Gentiles; these miserable protagonists of the salvation by works dog the steps of Paul everywhere to seek to undermine his apostolic influence. Even when Paul showed them in Jerusalem that he was not adverse to keeping a “Jewish vow” they well-nigh killed him; he was saved and protected by the soldiers of the Roman emperor stationed there. (Acts 21:17-26) But the victory course of the Gospel cannot be stopped by all the gates of hell which would prevail. The offence of the Cross will not be taken away!

Paul speaks of “the offence of the Cross.” (to skandalon tou staurou) We do well to take notice of this “offence” of the Cross a bit in depth. The term “offence” here is really, in the Greek, “stumbling block.” When taken in connection with the Cross of Christ it refers to that truth of the Gospel which preaches that salvation is wholly without any meritorious works of man. It is all of grace, that no man should boast save in the Lord. Now if Paul preached “circumcision” as a way of salvation it would mean that we had not, through law, died unto law at all, that we are still under the curse of the law, that a bloody sacrifice must still be brought, and that Christ is not the end of the law for righteousness to everyone who believes. 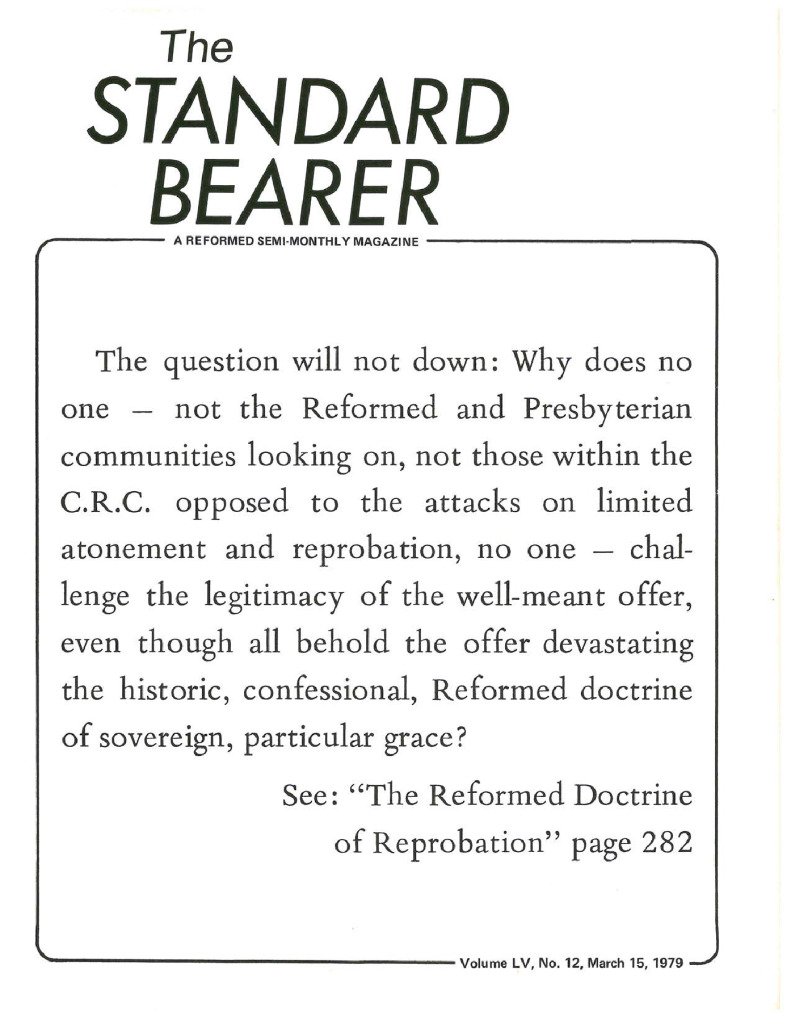