“The fathers have eaten sow grapes, and the children’s teeth are set on edge.” Ezekiel 18:2

“. . . for I the LORD thy God am a jealous God, visiting the iniquity of the fathers upon the children unto the third and fourth generation of them that hate me.” Exodus 20:5

When one reads these various quotations which appear above this essay he is struck with the fact that there is a seeming contradiction between the teaching of the Word of God in Exodus 20:5b and the main theme and principle here in Ezekiel 18. In the one case it seems that children are to die for the sins of their fathers, and in the other case we hear the oath-bound Word of the same God that such is not the case at all. And God will see to it that the lie of the proposition and accusation that children die for the sins of their fathers will never again be uttered in Israel.

Meanwhile we do have a “difficult passage” here which this rubric in the Standard Bearer will try to study exegetically!

The people of Israel who had been carried away into Babylon as well as those who still were left in the pleasant land of Israel were using a very evil proverb; it was evidently used in mockery and jest, as well as in sober reflection upon the lot of God’s people as they hanged their harps upon the willows. This proverb was “the fathers have eaten sour (unripe) grapes and the children’s teeth are set on edge.”

We do well to analyze this saying a bit. It is called by the LORD a proverb. The Hebrew has “mashal,” a saying, an allegorical proverb with a hidden meaning. That this is an allegory with such a hidden meaning, one which was meant to convey a certain judgment depicting the lot of Israel and the dealings of God with His people, is evident from the fact that this proverb does not say “our fathers” and “we, the children.” Yes, this was the implication and meaning of the proverb. But the form of the saying is not a direct accusation, even though it is an implied accusation against the ways and the dealings of Israel’s God. The insinuation is that those who are in Babylon and who die for sin, do not die for their own sins but for the sins of their fathers! God is visiting the sins of the fathers upon their heads, notably the sin of Jeroboam, the son of Nebat who caused Israel to sin. And He does this according to the rule of Exodus 20:5b. “. . . visiting the iniquity of the fathers upon the children unto the third and fourth generation of them that hate me!”

This is, according to the Word of God, not a correct interpretation of the Scriptures which cannot be broken. We must never judge according to appearances. To form a just judgment we must interpret the Scriptures, in the light of the Scriptures. Now the Word of God was clear enough in Exodus 20:5b. We do not read there that God simply makes the children of evil fathers die for the sins of their fathers, but that such is the case in the third and fourth generation of them who hate me! This is only true of the haters of the LORD! His mercy, on the other hand, is upon those who love Him! We may not simply say: your father was a wicked man, and, therefore, the Lord will put the blood of your father upon you and you shall die in your father’s sins!

That was the error and wickedness of the proverb used in the land of Israel.

Such is not the manner of God’s just judgment!

It seems that this “proverb” was rather generally used in Israel both in Babylon and in the land of Canaan. According to Jeremiah 31:29 the LORD will cause this proverb never again to be used rather by removing all sin, making a new covenant and putting the laws in their hearts, and remembering their sins no more. Christ will come and He will bring the perfect sacrifice. Then never more shall anyone complain about the sins of the fathers and the dull teeth in the children. However, here in Ezekiel 18 the LORD will put an end to this saying by so clearly and explicitly refuting this error that none shall ever be able again to use that proverb about the “sour grapes” in good conscience.

There is no respect of persons with God. “As the soul of the father, so also the soul of the son is mine.” God deals with each man according to his spiritual worth, according to his works. The rule for each soul is: fear God and keep His commandments! Although there is a corporal guilt in Adam this is not the rule between father and son. There is but one representative “head” of the human race, Adam. And he is the “type” of Christ who is to come. (Romans 5:14) But that is not the rule between other fathers and their sons. Such is not God’s dispensation in the dealings with the fathers and sons in Israel. They are all alike. All stand in relationship to the law of God in both tables, each in their own way.

And then the rule is: the soul that sinneth, it shall die! The term in the Hebrew for “sinneth” is a participial form of the verb indicating that the sinner is an unrepentant sinner. He is one who sins constantly and without ceasing, due to lack of heartfelt sorrow before the face of God at the altar. Such a sinner shall surely die! If merely being a sinner constituted the reason for dying, then there would not be any “he shall surely live” for anyone. For we all have sinned and come short of the glory of the Lord. That we are correct in thus interpreting this form of the verb is evident from the expressed testimony of the Lord in verse 21, where tie read “But if the wicked will turn from all his sins . . . he shall surely live, he shall not die.” Hence, the unrepentant sinner shall die, that is, the sinner who does not put off the old man of sin in heartfelt sorrow, and who does not put on the new man with true joy in God, tasting the wonder of forgiving love and grace.

Such is the rule, the canon of God’s dealing with man in Israel! Thanks be to God for this rule! This gives hope to the man who cries unto the LORD. The penitent sinner is surely heard. He shall not die. To this rule there are no exceptions. Those who will not preach or comfort according to this “rule” dare not enter the kingdom themselves, and they refuse to let enter those who would. These place the intolerable burden, upon the necks of God’s people, causing them to despair of life and hope. Here we have the basic guide-line for all soul-care in the church. Here is Christian psychiatry at its best. These are sound, hygienic words!

Peace be upon every one that walketh according to this rule (canon) and upon the Israel of God. (Galatians 6:16)

On the other hand there is a reverse side to the rule: the soul that sinneth shall surely die. It is: the soul that repenteth shall not die, but shall surely live! Such is the medicine which the Great Physician gives, and there is, healing in His wings. Not always do God’s people take this to heart and then they come to the cross-roads of their life. Many there be who stumble at this word. But the sheep hear the voice of the great Shepherd of Israel, who dwells between the Cherubim.

Every soul belongs to the LORD.

Thus he deals with and speaks to every soul in Israel.

THE CONCRETE CASE STUDIES GIVEN BY THE LORD (Ezekiel 18:5-18)

To know who a righteous man is, we must listen to what God says about what constitutes a righteous man. And then we must not say “Yes, but. . . ” Yes, but is this a rule for all cases? God did not make every soul alike, did he? No, he did not make every soul alike, but in their differences every soul falls under this rule. So let us not try to make ourselves an exceptional “case” which does not fit under this rule, in which, at bottom, the “sin-problem” is ruled out, the hard fact of our need of repentance from sin to serve the living God with a purified conscience!

What a beautiful down-to-earth description of a righteous man. Here a mirror is held before us: the royal law of liberty! One who sins misses the mark. He misses the mark of true worship of God and love for the saints. And he that doeth righteousness is righteous. Notice, that the text in verse 5 says as a fundamental rule: “But if a man be just, do that which is lawful and right . . . .!” Yes, that makes this very practical and concrete. This is instruction for the simple. A child can understand it.

What is a truly just man? He is one who is not simply “just” in appearances, in a little outward washing of the cup, but who is one in sincerity and truth. A righteous man is one whom God declares righteous because he finds his work perfect before God. God has examined his heart and life, correct, guiltless and just, answering to the divine rule. And what is in his heart comes out as fruit in his “doing.” Well done thou good and faithful servant will be said to him. For he is one who in “judgment” between man and man makes a fair decision, and in his behavior asks after the will of God; the good, the perfect and acceptable will of God!

You can also see that a just man is righteous in what he does not do. He separates himself from sinners and from the ways of the ungodly. He worships God alone. He will not have idols, and will not eat in the feasts of the gods, nor participate in their orgies. He worships God in spirit and in truth. Furthermore, a righteous man can be seen in his practical service-of-thanksgiving toward his neighbor. You can see that he is delivered from hatred toward his neighbor. He lives in moral cleanliness toward his wife and refrains from polluting his neighbor’s wife. He refrains from all that would entice him to sin. He does not seek the company of the wicked, the dances, all promiscuity. He honors the marriage ordinance of God. He calls the “new morality” by its true name: unrepentant godlessness and ungodliness! Because a just man has true “worship” he also has sound love for his neighbor. He keeps both tables of the law, and that, too, in their proper order and relationship.

What will happen to such a man? Shall he die? No, he shall surely live. He walks in his “part” of the covenant of God. He crucifies the flesh and walks in a new and holy life. And it makes no particle of difference how his father has lived. The soul that sins shall die; but the children shall not die for the sins of the fathers.

That is the basic rules laid down in Case No. 1.

There is here no room for the “sour grapes” theory of those who do not apply the simple teachings of the Scriptures. 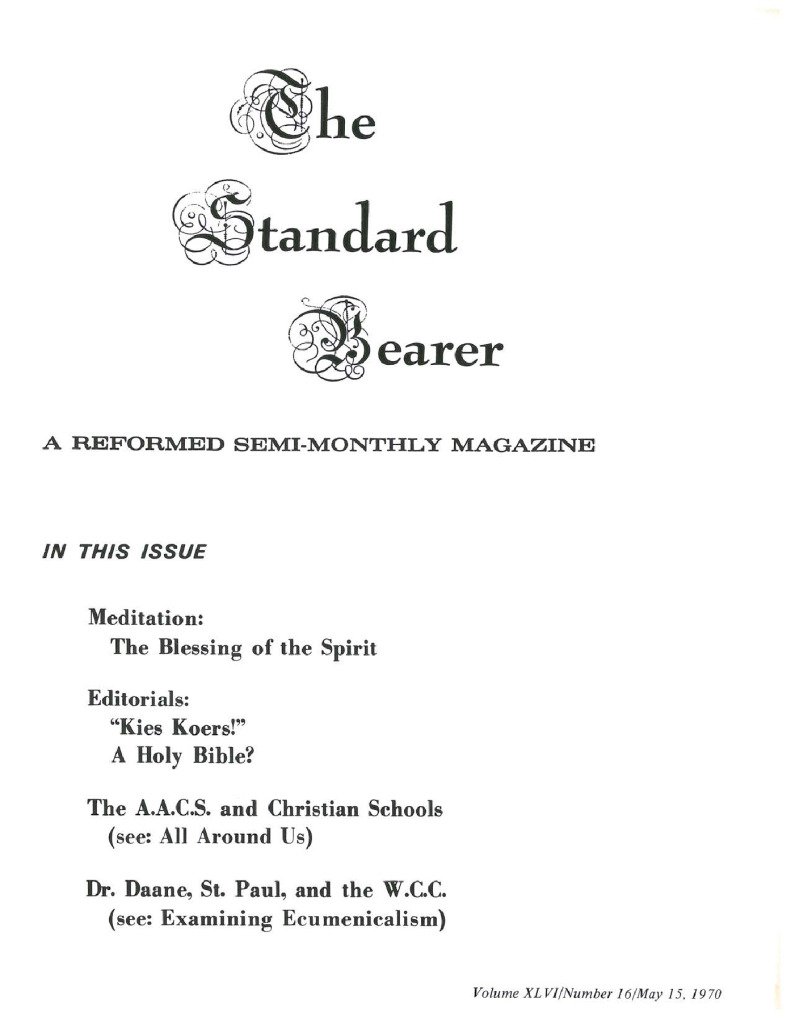