In Faith In Focus (March, 1979), the monthly magazine of the Reformed Churches of New Zealand, there is published without comment a letter from Prof. Dr. H. Vanderlaan to the Board of the Reformed Theological College, Geelong, Australia. Prof. Vanderlaan has been professor of philosophy and Christian education at Geelong since 1975, having taken up his work there shortly after the dismissal of Dr. S. Woudstra from the same college. It should be kept in mind that the Reformed Theological College, while operated by an association, is nevertheless supported by and, to an extent, under the supervision of the Reformed Churches of New Zealand and of Australia, sister denominations.

In this published letter Dr. Vanderlaan informs the Board that he does not wish to have his contract extended for another four or eight years, but that he plans to go back to the Netherlands. Among his reasons are the following:

Firstly, I cannot subscribe any more to the subordinate standards in your Constitution. Especially the Westminster Confession is for me a stumbling block. It is not only not a confession—it is a theological treatise formulated by a group of theologians—but also its content makes it for me impossible to accept it as a standard for the Christian faith e.g. the way it speaks about the light of nature, the counsel of God, God himself, predestination etc.

Secondly from the very beginning after my coming here, I became aware of the fact that my attitude and approach to theology and the church are quite different from that of my colleagues, of most of the students and of the people in the Reformed Churches in general. From the side of the students it brought from the very beginning accusations and suspicion. When I was just three weeks in Australia some students with a colleague tried to get rid of me. Today I am labeled as a liberal.

Further my idea of the church and of theology implies an open mindedness which I do not find here. Terms as “the Reformed faith” and “Reformed theology” are beyond my understanding of the gospel. . . .

Personally I cannot live another four years—let alone twenty years—within the Reformed Churches and at the College, which show the above mentioned pattern. I become more and more alienated from these churches. There are more things which I could mention. It is not a decision which I have taken overnight, nor on my own. Discussions with others—pro and contra—have helped me to come to this decision. . . .

There will undoubtedly be some who will draw the conclusion from Dr. Vanderlaan’s letter that it at least speaks well for the atmosphere in the Reformed Churches “down under,” while it speaks ill as far as Dr. Vanderlaan’s views are concerned. The latter cannot subscribe to the Reformed and Presbyterian creeds, especially not to the Westminster Confession. He does not even consider the Westminster Confession to be a confession. He cannot accept what the Westminster says on such important subjects as the light of nature, the counsel of God, God Himself, and predestination. Note, too, that Vanderlaan singles out the Westminster Confession, but does not exclude the other Reformed creeds; no doubt he cannot accept what they say on the same subjects any more than he can accept the Westminster. Moreover, he is so “open minded” that expressions such as “the Reformed faith” and “Reformed theology” are beyond his understanding of the gospel. Small wonder that, according to his complaint, he was labeled as a “liberal.” One would be inclined to ask: what did he expect? From his own self-description he is as liberal, if not more so, as the most liberal men in the Gereformeerde Kerken in the Netherlands.

No doubt there are those in the two Reformed denominations down under who will think, if they do not say, “Good riddance!”

Yet the fact that Dr. Vanderlaan writes as he does and leaves Geelong apparently on his own volition does not speak well for the Reformed Churches in Australia and New Zealand. It only means that the latter are less liberal and less tolerant than Dr. Vanderlaan. For, in the first place, of course. Dr. Vanderlaan did not become liberal in 1979, but has entertained these views all along. He himself states that he was aware from the beginning of his sojourn in Australia that his attitude and approach to theology and the church were quite different. Naturally, too, this could not remain a secret as soon as he began to teach and express his views. Yet he was not dismissed from Geelong—as was Dr. S. Woudstra—but was allowed to serve out his term and to leave voluntarily. The deputies responsible for supervision of Geelong in behalf of the churches in New Zealand and Australia were at least liberal enough not to oust him. In the second place, it should not be forgotten that while Dr. S. Woudstra was ousted from Geelong for his views on predestination and on Scripture, he was tolerated and given a clean bill of health in Classis Victoria of the Reformed Church of Australia, so that he was admitted to the ministry there. In the third place, it was a known fact at the time of his coming to Australia that Dr. Vanderlaan was in agreement with Dr. Woudstra’s views; nevertheless, he was accepted and installed as professor at Geelong.

Meanwhile, the Reformed Churches of New Zealand cannot escape co-responsibility for the toleration of such a self-confessed liberal as Vanderlaan. About the time of our tour in 1975 the Rev. G. I. Williamson (who, by the way, never responded to my open letter to him a few years ago) made much of the fact that the New Zealand churches now had a contractual agreement with Geelong, so that they had a voice in its supervision and in safeguarding the college’s adherence to the confessions. He also took strong exception to our criticism of the stance of the Reformed Churches and of our charge that they are apostatizing. And now the letter of Prof. Vanderlaan is published without comment in their Faith In Focus. One wonders what happened to the safeguard when a thorough-going liberal is tolerated for four years and then allowed to depart apparently on his own initiative! 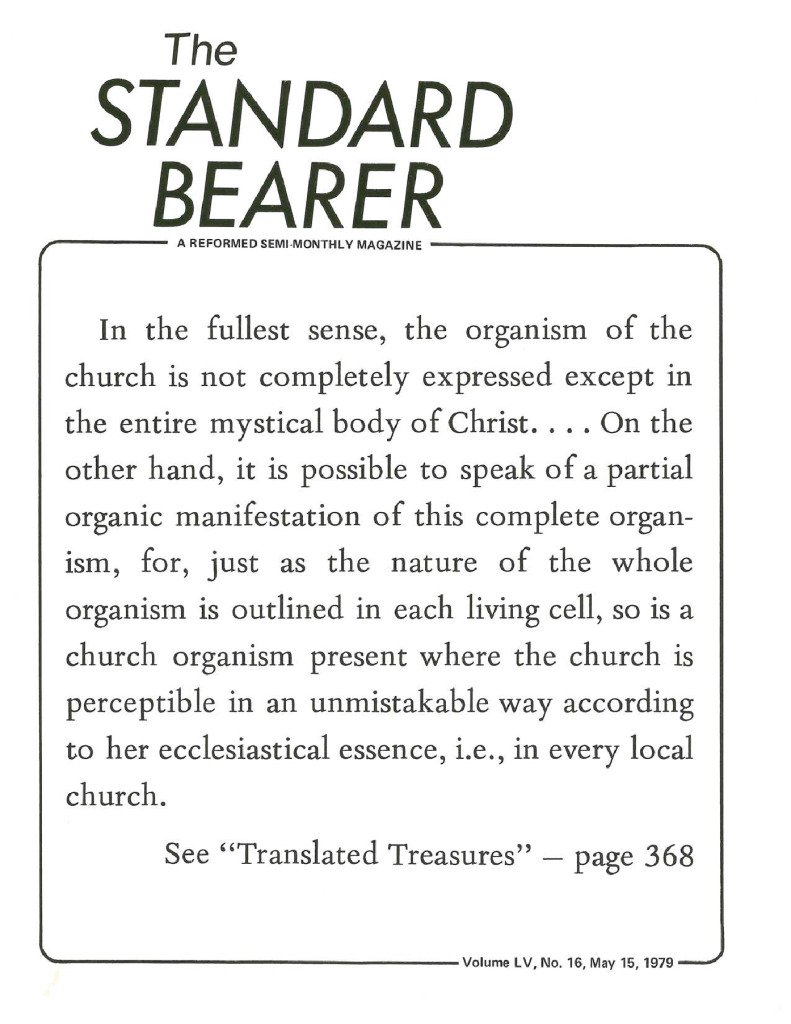