“We believe, since this holy congregation is an assembly of those who are saved, and that out of it there is no salvation, that no person of whatsoever state or condition he may be, ought to withdraw himself, to live in a separate state from it; but that all men are in duty bound to join and unite themselves with it; maintaining the unity of the Church; submitting themselves to the doctrine and discipline thereof; bowing their necks under the yoke of Jesus Christ; and as mutual members of the same body, serving to the edification of the brethren, according to the talents God has given them. And that this may be the more effectually observed, it is the duty of all believers, according to the Word of God, to separate themselves from all those who do not belong to the Church, and to join themselves to this congregation, wheresoever God hath established it, even though the magistrates and edicts of princes were against it, yea, though they should suffer death or any other corporal punishment. Therefore all those, who separate themselves from the same, or do not join themselves to it, act contrary to the ordinance of God.”

Speaking of the Church and the fact that there is no salvation outside of it, John Calvin said:

“We may learn even from the title of mother, how useful and even necessary it is for us to know her, sifice there is no other way of entrance into life, unless we are conceived by her, born of her, nourished at her breast, and continually preserved under her care and government till we are divested of this mortal flesh, and ‘become like the angels.’ For our infirmity will not admit of our dismission from her school; we must continue under her instruction and discipline to the end of our lives. It is also to be remarked, that out of her bosom there can be no hope of remission of sins, or any salvation, according to the testimony of Joel and Ezekiel . . . In these words the paternal favour of God, and the peculiar testimony of the spiritual life, are restricted to his flock, to teach us that it is always fatally dangerous to be separated from the Church.”

These words are certainly apropos to the situation of our times. We hear an increasing chorus of voices rising in criticism of the Church. More and more, so it seems, people are less than impressed with the necessity of being joined to the true Church. Calvin says unequivocably that no one can be saved outside of the Church and that is the point of this Article of ourConfession. This simply means that the matter of one’s church membership may not be treated in cavalier fashion. To put it bluntly, where one goes to church is of crucial importance and has eternal consequences.

There has been over the years no little disagreement as to what the Confession means by the Church or the true Church. The Confession calls the true Church, a “holy congregation” and an “assembly of those who are saved.” Because of this and especially because the Confession states concerning this assembly of those who are saved that “out of it there is no salvation,” there are some who insist that the reference is to the Church as organism. It is evident, however, that the Confession is referring not to the organism as such but to the organism as it becomes manifest in the institute of the Church among all nations of the world in time and history. This is why the Confession declares it to be the duty of believers to: “join themselves to this congregation, wheresoever God hath established it. . . .” No man of himself is able either to separate himself from or join himself to the organism of the Church, the true spiritual Body of Jesus Christ. One either is a member of the Body of Christ by virtue of divine election or he is not. On the other hand it is entirely possible to sever relations with or to join the Church as institute.

We must not conclude from this that there is only one true institute of the Church in the world at any given time. It would not be proper to say, for example, that the Protestant Reformed Churches are the one, true Church and all other churches are false. God gathers His people out of the nations of the world, and establishes His Church among the nations. Nevertheless it remains true that the true Church exists throughout the world and is easily distinguished from the false by the marks of the true Church. (Cf. Article XXIX)

This institute of the Church is “an assembly of those who are saved.” This cannot mean that all the members of the Church institute are saved. We know both from the Word of God and from experience that there is always a carnal element in the Church. This is one reason why the Church must have the pure preaching of the Word and the exercise of discipline in, order that these may be expelled. We also believe and confess that outside of this assembly there is no salvation. The institute of the Church is the visible manifestation in the world of the Body of Jesus Christ. To that one Body of which Christ is the Head belongs the one Spirit of Christ. The saving operation of the Spirit is within the Body of Christ and, therefore, outside of that Body no one has any part with Christ.

Hence no one, “of whatsoever state or condition he may be, ought to withdraw himself, to live in a separate state from it; but . . . all men are in duty bound to join and unite themselves with” the visible manifestation of the Body of Christ on earth. That is where Christ is in the office of believers and in the special offices of minister, elder, and deacon. Through the institute of the Church the means of grace are dispensed. To the Church the ascended Christ gave pastors and teachers: “For the perfecting of the saints, for the work of the ministry, for the edifying of the body of Christ.” (Ephesians 4:11, 12) It pleases God “by the foolishness of preaching to save them that believe.” (I Corinthians 1:21)Romans 10:13-15 teaches that in order to be saved one must call upon the name of the Lord. In order to call upon the name of the Lord one must believe in Christ and in order to believe in Christ one must hear Him. In order to hear Christ. one must have a preacher who is sent. Thus to leave the Church where the Word is purely preached is to despise the God-ordained means of salvation. It is in effect to leave the fellowship of Christ Himself, and that is terribly serious! John Calvin, speaking to this point, gave this warning:

“Hence it follows that a departure from the Church is a renunciation of God and Christ. And such a criminal dissension is so much the more to be avoided, because, while we endeavor, so far as lies in our power, to destroy the truth of God, we deserve to be crushed with the most powerful thunders of his wrath. Nor is it possible to imagine a more atrocious crime, than that sacrilegious perfidy, which violates the conjugal relation that the only begotten Son of God condescended to form with us.”

This would also imply that there are manifestations of the institute of Church which are corrupted and have departed from the truth. It falls upon believers to sever relations with such a corrupt institute and join that institute which is pure and holy. If men do not do this they act contrary to the ordinance of God. And, it may be added, they will reap the harvest of their error upon themselves and upon their generations. It is well to note at this point the viewpoint of the Confession. TheConfession considers this whole matter from the point of view of the obligation which rests upon all believers. They are in duty bound to join themselves to the true Church and not to withdraw from it. That is done through the outward sign of baptism, either of infants or of adults and through public confession of faith. Thus through the union in public worship, the celebration of the sacraments, and in general, participation in the organic life of the Church one joins the true Church. Again, let it be emphasized, that is where Christ is. There through the preaching of the Word the voice of the Good Shepherd is heard calling His sheep so that they follow Him. Outside of it there is no salvation.

The Confession also speaks of the demands which rest upon believers as members of the Church. They must maintain the unity of the Church. They may not commit the sin of schism, a sore evil which has plagued the Church from the very beginning of its history. John Calvin warned against this sin repeatedly. Just as one must join the true Church where the Word is purely preached, so the only reason one may justifiably sever relations with a Church is when the preaching and doctrine are corrupted and discipline is no longer exercised in obedience to the command of Christ. Always his duty remains to walk worthy of his calling in the love of God, “endeavoring to keep the unity of the Spirit in the bond of peace.” (Ephesians 4:1-3)

Believers must submit themselves to the doctrine and discipline of the Church. They must bow under the yoke of Christ. The point is, and this will be further developed in Article XXX, that Christ is the chief and only officebearer in the Church. Christ has appointed’ officebearers in the Church: ministers, elders, and deacons. Through these officebearers, who represent Christ, Christ speaks His Word, governs His flock, and ministers His mercies to the poor. Thus by submitting to the Christ-ordained officebearers believers “bow their necks under the yoke of Jesus Christ.” Obviously this implies a responsibility on the part of the officebearers. They must speak only the Word of Christ as revealed in the Holy Scriptures and they must rule the congregation and dispense the mercies of Christ according to the Word. Then and only then are they faithful and obedient to the Church Who called them. Then they truly represent Christ and have the right to demand obedience in His name.

Believers must, “as mutual members of the same body, (serve) to the edification of the brethren, according to the talents God has given them.” Christ through His Spirit has graced the members of His Body with a wide variety of spiritual gifts. No man in the Church has received these gifts for his own selfish interests, but has been given them in order that with them he may serve the welfare of the Church of Jesus Christ and the cause of the Kingdom of Heaven. (Cf.Romans 12:5-8) Believers must use their gifts for the benefit of their fellow saints so that the Church may be built up in the faith and knowledge of the Son of God.

Finally the obligation to join the true Church wheresoever God has established it is so serious and so sacred that one must obey it regardless of the consequences—”even though the magistrates and edicts of princes were against it, yea, though they should suffer death or any other corporal punishment.” This was emphatically true at the time when theConfession was written. Guido de Bres himself was hanged on account of the faith. It will, no doubt, be true again, probably in the not too distant future. 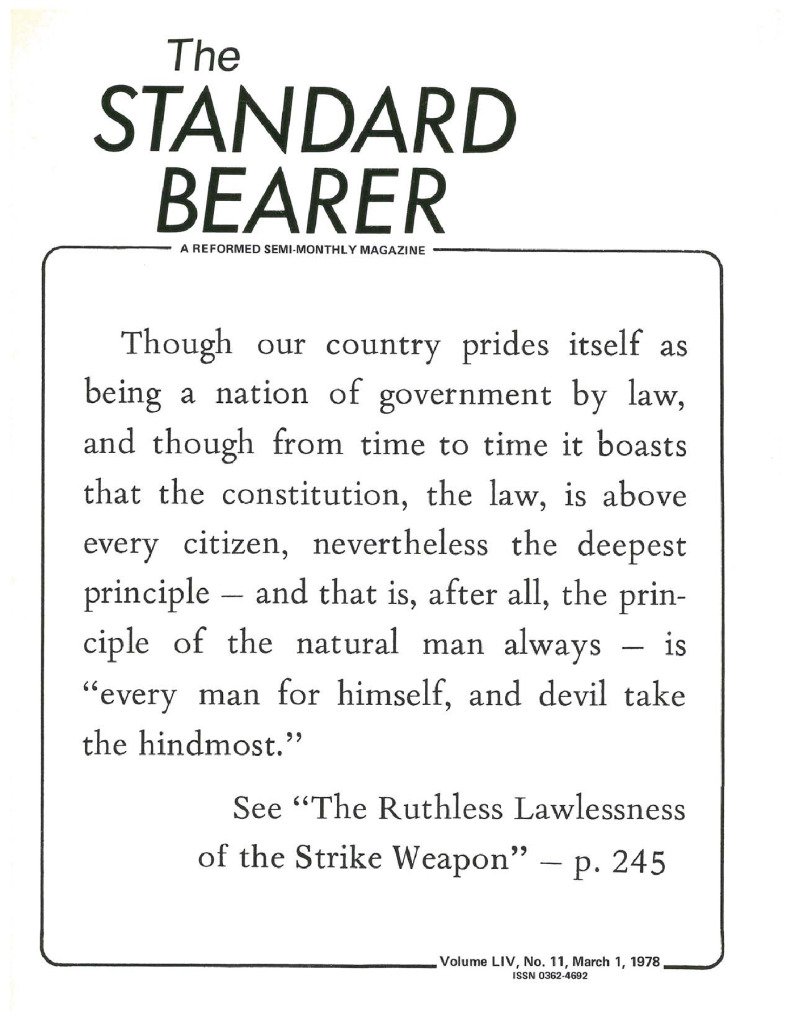