Over the last few years man has become increasingly alarmed about pollution. In our day and age, when man talks about pollution he is not talking about the pollution of his soul; he is talking about the pollution of his soil and of his air and water. Man’s alarm is understandable. When you talk about the earth and threats to its environment you are talking about man’s very existence. Man lives not only on the earth, but out of the earth. God made man a creature whose very physical existence is dependent upon the means only planet earth can provide. Earth’s clean air, fresh water, and nourishing food are vital. Foul air, contaminated water, and poisoned food spell disaster. Every other planet in the vast universe is alien to man. What happens when the earth itself becomes alien to man, so that even it poisons man? Then death is multiplied upon death. It does not take a scientist to tell us this; common sense is sufficient. The human race, however, is not particularly renowned for the last mentioned quality. So mankind continues to abuse earth in an astounding manner and to lay it waste at an alarming rate.

The evidence of man’s negligence, waste, and abuse of this creation is everywhere. Man himself can no longer ignore it. Over the last decade, and the last few years especially, the threat of man to his environment has been vividly shown. Incidents have occurred which threaten the environment with such widespread damage that prophets of doom have arisen in man’s own midst—prophets whose concern is purely earthly and man centered, but who see that the greatest threat to man is man himself. He is always the cause of his own misery.

We do not have to search very far to find causes of man’s alarm. There has been the “Three Mile Island” incident with its lingering threat of nuclear, radio-active pollution. If such an accident can occur in one nuclear energy plant, what is to prevent it from happening to others? There has been the rampaging oil well in the Gulf of Mexico, its oil gushing out into the open sea for over half a year, fouling the coast up into Texas. There has been the poisoning of a large part of the Bay of San Francisco, killing much of its life. The Japanese have had to contend “with mercury poisoning among their people because of contaminated fish. The Great Lakes themselves are continual objects of deep concern because of pollution from the large industrial cities on their shores. So the list goes on and on—smog, pesticides, oil tanker sinkings, etc. Newsweek Magazine, Oct. 29, 1979 carried this ominous news:

In a field near Louisville, KY., a rusty jumble of 17,000 metal drums is leaking a witch’s brew of unidentified chemicals into a tributary of the Ohio River. In Hardeman County, Tenn., at least a dozen dangerous pesticides oozed out of a dump site into the local water supply. In Denver, cancer-causing radon waste from long-abandoned radium mines is seeping into buildings and under city streets. And in Elizabeth, N.J., 40,000 barrels of toxic, flammable and explosive wastes are piled precariously close to giant propane and natural-gas storage tanks a quarter mile away.

How to dispose of dangerous chemical wastes is fast becoming the nation’s No. 1 environmental problem.

Every major, national magazine regularly carries similar articles. The magazine “U.S. News & World Report” recently has published a book entitled “Our Poisoned Planet: Can We Save It?” Man recognizes that things are reaching a critical point in the environment. There is an undercurrent of fear among us. Who wants to die the slow, painful death of poisoning?

Now, when man writes books about saving this poisoned planet, he is, of course, considering salvation in a wholly earthly sense. He is talking about salvation through the means of water and soap, rather than about salvation by blood and the Spirit. Unbelieving man is no more interested in the true world-saving power of Christ’s blood than he is in the soul’s pollution. Those who do talk about Christ’s blood in connection with the poisoned environment do so out of a desire to enlist its power to realize their dreams of an enduring kingdom on this earth. What unbelieving man desires is a living earth that is self-perpetuating, and which can, therefore, nurture and support mankind indefinitely. The only poison in this planet that man is concerned about is the chemical kind. From the chemical concoctions that man himself has brewed up, man wants to save himself. Man wants to reverse the accelerating progress of death in and to this creation. It is a vain hope. Man’s vision of paradise regained under man’s benevolent and wise direction and patient care is not to be. And the reason man is not going to succeed in cleaning up this polluted environment with water and soap (be it with or without phosphates) is because of a deeper, more fundamental pollution, the pollution man does not reckon with, the pollution of man’s own soul. The two are inseparably related. The filth of man’s soul reflects itself in creation. You might say that the filth of man’s soul rubs off on the earth. Man leaves his mark behind. As long as polluted man walks on the earth, pollution of creation will continue to increase.

Polluted man has two formidable obstacles standing between himself and his visions of a paradise regained, namely, the curse, and his own insatiable greed. The curse strikes a breach between creation and man. The curse means that essentially man is an alien in what was once his homeland. Now the creation itself opposes man. It is true that man has been able to eke a living out of the earth, and has in some instances even prospered; but for that living, man has had to pay a price. From the time of Adam that price has been, in part, the sweat of the brow, unceasing labor, and weariness. The earth will not support man except she be forced to do so. When man was pure, the earth yielded to him as her Lord-given lord, bountifully and spontaneously. Now the only thing the earth will yield to man voluntarily in abundance is weeds. Instead of the fruit tree comes the thorn; instead of the vineyard comes the brier patch; instead of wheat comes the thistle. Creation does not recognize man as her king any more; he is a usurper. And she yields to man in subjection only after man by tyrannical strength overpowers her and strips from her increase. The earth is more hospitable to the hordes of insects than to man. And the insects together with the weeds compete with man for his harvest. So man can not relax his vigilance if he is to prevent the weeds and bugs from getting the upper hand; If the land is going to support society’s ever growing population, man must use every available means. High production depends on applying highly potent chemicals. Nothing else is adequate for our society, at least not as judged by standards of profit and production. In a society in which the ratio of consumer to food producer is over 50 – 1 it is not feasible to depend on man power; machinery is needed. And for machinery you need industry, and for industry you need fuel for energy, and with fuel comes pollution. Forests are laid waste, hills are leveled, and man drills beneath the depths of the sea. Fuel is spilled, and fuel is burned. The waters turn black and red, the air becomes brown. Death is multiplied upon death. Creation’s deterioration is hastened, and man works his own misery and death. In a cursed creation in which the earth is estranged from man and opposed to him, such a situation is inevitable. Man is never going to reverse the realization of the curse.

The other obstacle to a paradise regained, or to a saving of our planet’s environment, is man’s own greed. The environmentalists hope to escape the consequences of the curse thru education, which means alerting man to his danger and pleading with him to use wisdom in caring for his environment. They hope that technology will enable man to produce and to consume without polluting in the future. They plead with man to be content to do without things until that day comes so that mankind is not poisoned before the man-made paradise can dawn tomorrow. But how futile! Give greedy man the choice between living at a high level today and endangering life tomorrow, or making sacrifices today in order to protect the world of the future, and what do you think the choice of greedy man is going to be? Why should the world be well off tomorrow at my expense today? Let tomorrow’s generation take care of itself. Let us take care of ourselves today. Such is their attitude. The environmentalists who want to regulate greedy man’s mad rush to fill his carnal appetite must feel a bit like the steward of the King of Israel who stood at the gates of Samaria during the time of Elisha and tried to regulate the starving Israelites as they poured through the city gates to get down to the empty camp of the Assyrians. The heedless mob simply trampled the foolish fellow under foot and he died. So the environmentalists are involved in a losing battle. They can not scrub man’s soul clean, and being unable to remove the true source of all poison in creation they can never succeed in saving creation in any sense.

Pessimistic, you say? No, realistic—as realistic as Scripture. In Revelation you read of the development of the manifestation of the curse in this old creation, from the seals in chapter 6, to the trumpets in chapter 8, to the emptying of the vials in chapter 16. One reads there of creation becoming increasingly inhospitable to man, working death in increasing measure. These chapters speak of the signs of the intensification of God’s wrath as time nears its end, of signs of judgment that appear in creation. And God exactly works His wrath through the foolishness of greedy men, so that they bring wrath upon themselves in all its forms. As we see creation becoming more polluted and poisoned and ever more instrumental in working suffering and death, we know that the end must soon come. The creation groans to be delivered. To us that groan speaks of hope and of Christ’s coming. Man imagines that he might die at his own hands through self-inflicted environmental poisoning. And humanly speaking, if man continues polluting as he is at the present rate, this could happen. But that is not to happen, for God will not allow the human race to die off of itself. Before that point is reached Christ will come in judgment and salvation. And it does not seem as though that time can be far off.

Today, everywhere we look, we see the evidence of man’s greed and of the curse. In creation we see the signs and workings of judgment, workings by which we also are affected. But do we despair? No, we place our faith and trust in the one Savior, Who, having redeemed the world with His precious blood, is now coming to cleanse it from its filth with a refiner’s fire. We do not despair, for our hearts are not fixed on the things here below, but on the things that shall be, the new heavens and the new earth, which shall be free from all pollution, and in which we too shall be pure, not only in principle, but in our entirety. 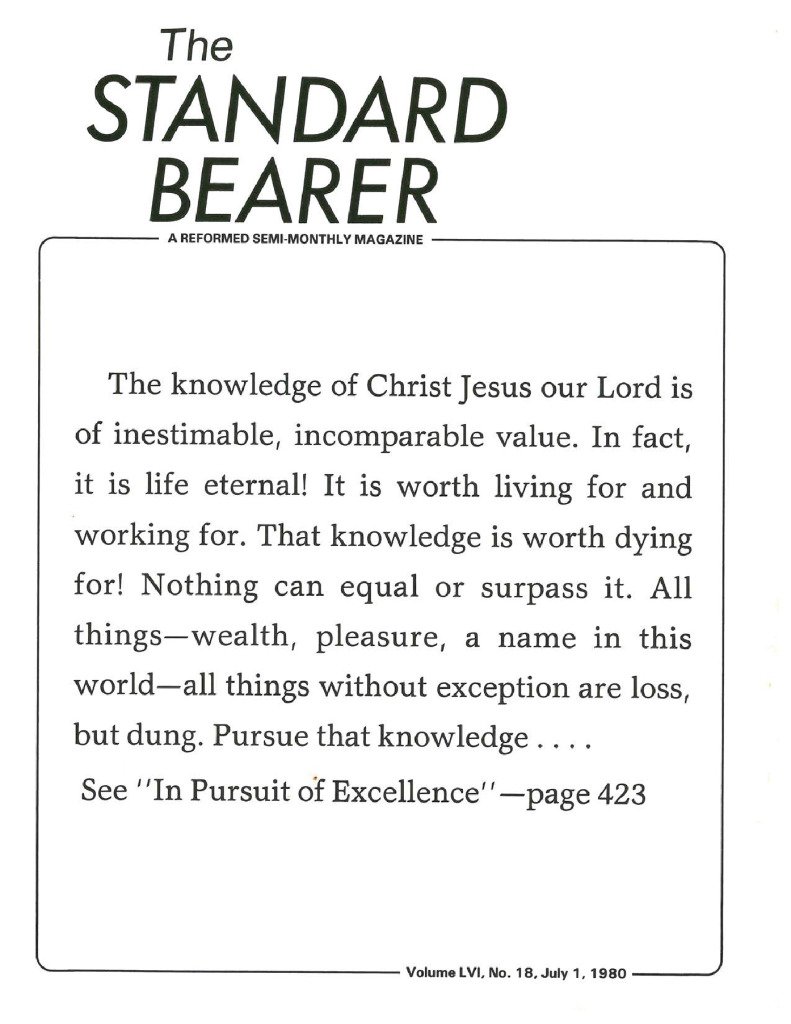