Even the world is ringing alarm bells. It seems the problem centers in the millennial generation: those born in the 1980s and 1990s. The employer in his late fifties cannot believe his ears when a twenty-something young man expects to work minimal hours for fantastic pay and benefits. The tenured professor is disturbed by the number of students in his classroom who expect royal treatment, as if he owes them everything. The veteran police officer is distressed by the rights-demanding attitude of so many youthful drivers he interacts with on traffic stops. What employers, professors, police, and others are noticing is called entitlement, and its fingers are reaching into every corner of society.

This mindset is not foreign to you, is it? While en­titlement is definitely present in the world, we want to see this attitude in ourselves. We expect to observe en­titlement in the world, for the world lies in darkness. But we should not be surprised when we find this same attitude in ourselves. Why? Because our sinful nature is present with us until we die.

The examples of this “I deserve, I have a right to” attitude are many. Consider just two scenarios.

It is Saturday morning. Frank has worked forty hours this week at his summer job. Saturday is his day to watch sports and hang out with friends. He hears a knock on his bedroom door at 7:30 in the morning; it is his dad, and he wants Frank to help him pull weeds in the yard. Angrily, Frank throws the sheets off his sleepy body: “He wants me to help him in the yard on Satur­day? Saturday is my day,” Frank says. Frank thinks that he deserves a Saturday all for himself.

Amy is a junior in college. Her biology professor announces that a big exam is coming up, and that this exam is not to be taken lightly. Despite the instructor’s warning, Amy slacks off on the night before the exam, whittling away her time on Facebook. Before long, it’s 12:30 a.m., and time to head off for sleep. She takes her exam the next day, but after finishing, she is not very confident. The next week Amy’s professor returns the exam, and she discovers to her horror that he gave her a 59%. Upset and disappointed, she clenches the exam in an angry fist and rushes to her friends after class: “Can you believe the harsh grading scale on that exam? And he asked such unfair questions! I would be surprised if anyone did well on it. He should have given me a much better percentage.” Amy thinks that she has the right to a much better grade, even though she did not study.

The world tries to get at the root of entitlement—many recognize clearly that there is a problem, so they try to locate the cause or causes of that problem. Society declares the source of entitlement to be bad parenting. Fathers and mothers tell their children that they are special, unique, and that they have boundless potential. Parents never let their sons and daughters lose at anything. Dads and moms spoil their children, giving them anything they want; these spoiled children grow up to be spoiled, entitled adults. In addition, the world traces the entitlement problem back to laziness. Young people and young adults simply do not want to work for money, but rather expect the money to be given into their slothful hands. If laziness is rewarded, why work? Finally, many today say that entitlement flows out of materialism. We live in an age and country of tremendous wealth. We have so much money, so many cars, such big homes, and a great many electronics; after a while, we begin to think that we deserve these things.

There is, of course, truth to these reasons for entitle­ment that the world comes up with. But these are only surface reasons. To get at the heart of entitlement, we must search the Word of God. Going to the Bible will reveal to us a fundamental truth about entitlement: it is not merely a cultural phenomenon, nor is it only a sad downturn through recent generations; rather, the enti­tlement mindset is sin. Entitlement is transgression of the law of God.

There are four main sins that lie behind the “I de­serve, I have a right to” attitude: pride, ingratitude, self­ishness, and covetousness.

First, pride lies behind entitlement. Pride is a loath­some disease. One who is proud looks down on others, thinks very highly of himself, and deceives himself into thinking that he is special, outstanding, and unique: unparalleled athleticism; superior grades; flawless mem­ory; high intelligence. A proud person, so inflated with accomplishment, begins to demand what he thinks he deserves. Does he not have a right to anything he wants —that grade, that job, that position of power? After all, he is outstanding and unique—so he thinks.

Second, ingratitude drives this rights-demanding at­titude. Ingratitude is thanklessness: showing no thanks or appreciation for what we receive from God and from others. Ingratitude impatiently expects something to be given, and does not take into consideration at all that the thing is a gift, or given out of kindness. Someone with a thankless attitude receives what’s given with an open hand—always an open hand—but rarely, if ever, a “thank you,” or even a smile. Ingratitude flows very easily out of pride—thanklessness inevitably follows from an inflated view of self.

Third, selfishness lurks below the surface of this “I deserve” mentality. Selfishness is self-absorption. It is about my time, what I want, and what I should receive. To connect the dots between selfishness and entitlement is not difficult. When a person’s attitude is driven by the “I” inside of them, then there is almost no limit to what they will demand, and what rights they believe they have. Of course, selfishness is also closely related to pride—essentially, pride and selfishness are about the big “I.” Also, selfishness is a twin to ingratitude—those who do not look past their own selves will not be thank­ful.

Fourth, pride, ingratitude, and selfishness, as three rivers of sewage, flow into the polluted lake of covet­ousness. Covetousness says, “I never have enough. I need more. Give me more. Without more, I’ll never be satisfied.” Covetousness is the all-absorbing desire to have more—more money, more influence, a bigger house, a prettier wife, a faster car, or a job promotion. A covetous person makes the pursuit of more an idol. A covetous heart is an entitled heart.

We find all these sins identified by Jesus in His parable of the rich fool. Open your Bible to Luke 12:13–21 and read it a moment.

There was a rich farmer who worked hard for what he had, and the fruit of his hard work was that he had an abundant harvest. He planned to build greater barns where he could store his plentiful crop. After having built the barns and stored up for the future, he could take it easy and party; he would have no worries in the world. This man was a fool. In him were found all the sins that lie behind entitlement. As you read the parable, did you notice how many times the farmer ref­erenced himself—he was proud of his accomplishments. Observe his ingratitude: since it was he who worked hard for what he had, why would he ever be grateful to God or anyone else? Do not miss his selfishness, either: he planned to build those bigger barns, and to lay up his crop, all for himself and his own enjoyment and plea­sure. Now, zoom out and see the big picture: this rich farmer was covetous, according to Jesus’ own words in verse 15; this wicked man always wanted more, trusted in his riches to bring him a secure future, and found his happiness in his wealth and goods. Indeed, he was a man who thought he was entitled to everything!

What happened to that man? He worked hard in his fields, prepared his crop for a plentiful harvest, metic­ulously planned out his future, and looked forward to resting with all his riches and goods in ease and merri­ment. But…suddenly, all those riches were gone; in a moment, all the fool’s work and plans came to a halt, for that night he died. God required the rich fool’s soul—the life that God had given him He now demand­ed back. All his goods, crops, money, and enjoyment in the body were nothing, for he could not take his riches where he was going after death. The rich fool went to hell.

Jesus’ words ring all the louder: “Take heed, and beware of covetousness: for a man’s life consisteth not in the abundance of the things which he possesseth” (Luke 12:15). By God’s grace, we must take heed—be watching with our spiritual eyes and hearts for covet­ousness. By God’s grace, we must beware—guard or protect ourselves over against covetousness. Why? A man’s life does not consist in, does not have its signif­icance in, material wealth! Surely, this is a timely and sharp warning for us, whose “I deserve, I have a right to” attitude is, at the root, covetousness.

Do not be discouraged. There is good news, but space demands that we continue this in the following article. In the next article, we will consider the spiritual prescription for entitlement. 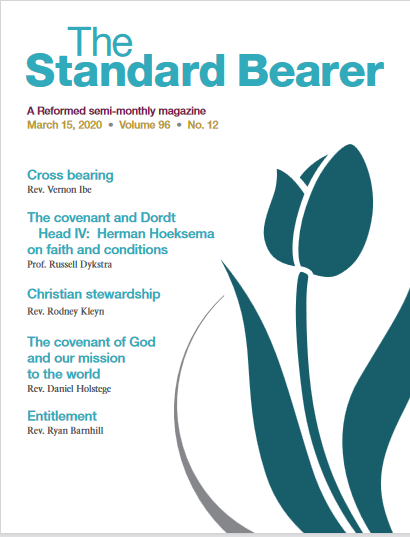