This has not changed with the passing of time. Today too the truth of sovereign predestination is not a popular doctrine. Few and far between are the places where it is consistently maintained in all its sharpness, purity, and force. Attacks are constantly being made against it and it remains the urgent calling of the church to defend this precious truth. The great tragedy of our day is, however, that the bitterest attacks against this truth are coming from those within the Reformed camp. There are those who claim to hold to the Reformed tradition, who piously prate about allegiance to Dordt and who, nevertheless, do all in their power to destroy the truth of sovereign predestination.

I mention these things because a relatively recent attack against the truth of predestination in particular, and against our stand on this doctrine, has involved the whole question which is the title of this article. I refer to the attack of James Daane in his book, “The Freedom of God.” While Daane was undoubtedly influenced by G. Berkouwer, he in turn apparently was influential in the thinking of Neal Punt, who has recently created quite a stir in the Christian Reformed Church with his book, “Unconditional Good News,” in which the truth of sovereign predestination is denied.

It is true that most of these latter objections center in a mutual and abiding hatred of the doctrine of sovereign reprobation. This is evident from the gravamen presented to the Synod of the Christian Reformed Church by Harry Boer in which Boer specifically asked that the doctrine of reprobation be stricken from the Canons. And, while Synod refused to accede to his request, nevertheless the committee report which studied the matter promoted in their study a view of reprobation which is little different from that of the Arminians in the fifteenth and sixteenth centuries and which was condemned by the Canons of Dordt.

While the main attacks of these men are hurled against the truth of reprobation, it nevertheless remains a fact that their teachings on election are also contrary to Scripture and the Reformed faith as embodied in the Reformed Confessions. While it is not always very clear what Daane, Boer, and Punt want, nevertheless, in general, they all accuse us (and Daane is the most vociferous in his accusations) of denying an election in Christ.

While it would carry us too far afield to investigate this charge in detail, it is their contention that the only position which truly maintains an election in Christ is their view of election which is essentially universalism. It seems that in common these men hold to the idea that because there is no reprobation (as a sovereign decree of God according to which He determines that a certain number of people shall go to hell in the way of their sin) all men are elect in Christ. This makes it possible for the gospel to tell them that they are elect in Christ, that God loves them and that salvation is available to them. Their final destiny, therefore, is determined by their reaction to the gospel: to accept it will result in heaven; to reject it will bring them to hell.

This is an open and blatant Arminianism which is staggering—especially in the light of the fact that it is presented in Reformed circles and defended in Reformed denominations without any attempt at ecclesiastical censure and discipline applied to those who teach these things.

What concerns us now, however, is the charge that we who maintain and teach sovereign and “double” predestination cannot possibly maintain an election in Christ.

Of course, it must be understood that those who have leveled this charge against the Reformed view, have had an axe to grind. It was, if my memory serves me correctly, Dr. Daane who first brought this charge. But the charge was made in the context of a defense of the first point of common grace, and especially the free offer of the gospel. The question was: How can God freely offer salvation to all men when He has only elected some unto eternal life? Frequently, the answer which was given was little more than a shrug of the shoulders: This is a mystery which we cannot fathom. But Daane went further. Such a salvation could be offered to all men through the gospel only when such salvation was available somehow in the cross of Christ. In some sense, whether in extent or intent, whether in sufficiency or efficacy, or whether in all four senses, the cross was for all. But then, also, it followed with undeniable logic that in some sense all men are in Christ. And if all men are in Christ, they are in Christ in the eternal decree of election. This is the whole point of Punt’s book, referred to above.

And it was in this context that Daane, looking at the historic view of sovereign election as maintained in the Reformed Churches and as held to by our own denomination, claimed that we could not hold to an election in Christ. The whole point was made in the interests of maintaining the free offer.

Now it is not our purpose in this article to enter into a lengthy criticism of all this. It is only of interest to point out that a repudiation of the free offer of the gospel opens the door to a solid maintenance of the truth that election is indeed in Christ. There really is no problem here as long as one maintains the truth that the gospel is not an offer, but “the power of God unto salvation to all who believe.”

It is for this reason too that those theologians who have stood in the Reformed tradition from the time of Calvin till today have had no difficulty maintaining this view. One need only read a few pages of Heppe’s “Reformed Dogmatics,” e.g., on the subject of predestination, to discover that all Reformed theologians, without fail, have maintained this truth.

It is true that in the discussion Reformed theologians often divided over the question of infra- and supralapsarianism and, as a result, held to slightly different views of what election in Christ really meant. The infras, e.g., took the position that the decree of election preceded the decree of Christ; i.e., that God first determined to save a people out of the fallen human race, and that this determination was then made to save them in Christ. The supras on the other hand, held to the view that God first determined to glorify Himself through Christ, and then determined to do this by way of the election of a particular people in Christ. But this difference in viewpoint was in no way a difference over the question of whether election was indeed in Christ or not. On that question all agreed.

And it is hard to imagine that a Reformed theologian could take another viewpoint, for the Scriptures are clear on this. We need only quote a few texts to show how this truth is emphasized again and again in the Word of God. The words, “in Christ,” e.g., are like a theme running through the whole of Paul’s epistle to the Ephesians. “According as He hath chosen us in Himbefore the foundations of the world. . . . Wherein He hath made us accepted in the beloved. In Whom we have redemption through His blood. . . . That in the dispensation of the fulness of times He n-right gather together in one all things in Christ. . . . In Whom also we have obtained an inheritance. . . . That we should be to the praise of His glory, who first trusted in Christ. In Whom ye also trusted” (Ephesians 1:4-13). We are in Christ and receive all the blessings of salvation from Christ because we are chosen in Him from before the foundations of the world.

Romans 8:29, 30 teach the same thing. “For whom He did foreknow, He also did predestinate to be conformed to the image of His Son, that He might be the firstborn among many brethren.” If we are predestinated to be conformed to the image of God’s Son this is only because we are chosen in Christ and conformed to His image in unity with Him. It is not surprising that Colossians should teach the same thing. “In Whom we have redemption through His blood, even the forgiveness of sins: Who is the image of the invisible God, the firstborn of every creature. . . . And He is before all things, and by Him all things consist. And He is the Head of the body, the church” (Colossians 1:14-18).

What does election in Christ mean?

It means first of all that God determined to reveal the riches of His glory through Jesus Christ Whom He appointed Head over all. Christ is the firstborn of every creature. He is before all things, and by Him all things consist. Christ is first, in an absolute sense in the counsel of God.

It means, secondly, that Christ is chosen and determined by God as first in the counsel because it is God’s eternal purpose to save a Church unto Himself, an elect people, the body of Christ with Christ as the Head.

And surely this means that in the eternal purpose and counsel of God there is no Christ without the Church just as there is no Church without Christ. One cannot say “Christ” without, at the same time saying “elect Church.” And one cannot say “elect Church” without at the same time saying “Christ.” Both are one in the eternal counsel of God, eternally united, eternally one glorious body, eternally the divinely ordained way in which God Most High purposed to reveal the riches of His glorious grace.

But the significance of this must not be overlooked.

Because of our election in Christ, the assurance of our being in Christ is also the assurance of our election. The two belong together. The Canons, in their own beautiful way, emphasize this: “The elect in due time, though in various degrees and in different measures, attain the assurance of this their eternal and unchangeable election, not by inquisitively prying into the secret and deep things of God, but by observing in themselves with a spiritual joy and holy pleasure, the infallible fruits of election pointed out in the Word of God—such as a true faith in Christ. . .” (Canons I, 12). It is in laying hold on Christ and all His fulness of salvation that the child of God comes to the sweet peace of election.

And, in the confidence of election, he knows that he is elect only in Christ. He knows, therefore, that all his salvation, which flows forth from the eternal decree, is in Christ Jesus his Savior. To Him he looks, expecting all things at His hand; on Him he relies, waiting upon Him for all that God has promised; in Him he finds rest for his weary soul, knowing that nothing can separate him from the love of God which is in Christ Jesus his Lord. 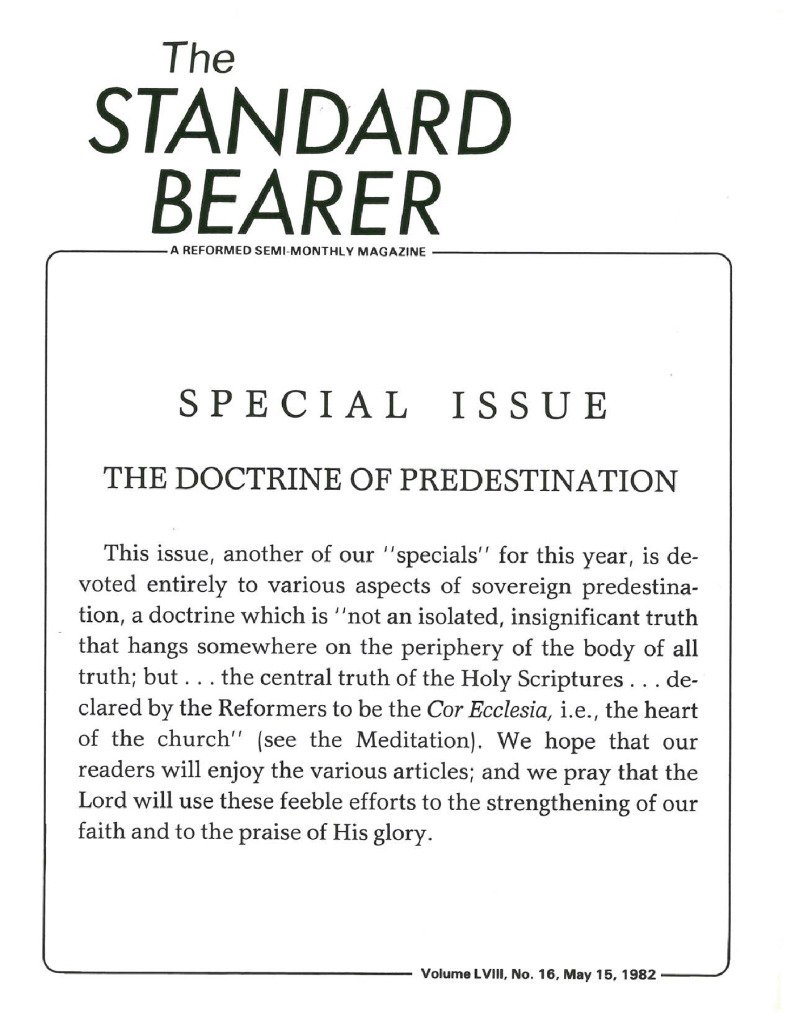