Editorship of the Standard Bearer

Editorship of the Standard Bearer

The Editorial Committee hereby informs the readers of the Standard Bearer of a significant development as regards the position of editor of the Standard Bearer. In the October 1, 2003 issue, Prof. Engelsma informed the readers of the Standard Bearer of a change forthcoming (“New Editor Sought”). He had notified the magazine staff (that is, the department editors) that he would not be available for reappointment as editor for the next volume year (i.e., volume 81, beginning October 1, 2004), citing his age and the number of years that he had borne the load of this work. With much regret, the staff accepted his decision and appointed a committee (consisting of Professors Hanko and Dykstra, and Managing Editor Don Doezema) to search for a new editor-in-chief.

The search committee knew at the outset that finding a new editor for the Standard Bearer would be no easy task. After much discussion of the nature and duties of the work of editor, as well as the necessary qualifications of the editor, the committee approached various men who, in the judgment of the committee, were suited to the task. However, none of the men believed that he would be able to handle the position of editor and do justice to his work, be it in the seminary or in the pastorate. The search committee reported to the staff these findings as follows:

We were convinced of the validity of the concerns, and decided therefore to explore possibilities of a kind of shared editorship on a temporary basis. We understand well that it is in the best interests of the magazine that there be one man writing editorials. We should in fact commit ourselves to the goal of making such an appointment as soon as feasible. But we also believe that, in an interim period when it is not feasible, a shared editorship can be made to work, not just tolerably, but well.

The committee, accordingly, came with a proposal for a joint editorship. They wrote to the staff:

What we propose is that the editorials be shared by a small number of seasoned pastors who can conveniently meet—both to map out a strategy for dividing the labor and to monitor progress in fulfilling it. The idea here is that every effort will be made to assure that editorials continue effectively to treat current, critical issues—in well worked out series of editorials. We do not want 21 separate, randomly selected, sometimes overlapping editorials, with all sense of order or continuity lost because they come from various writers, each doing his own thing.

We suggest that, to facilitate the kind of close cooperation necessary to achieve that goal, four men in the Grand Rapids area be appointed to a shared, temporary, interim editorship. And, again, in an effort to be as helpful as possible to the staff, we did take it upon ourselves to ask four men if they would be willing to accept such an appointment. Prof. Dykstra, Prof. Gritters, Rev. Koole, and Rev. Terpstra have said yes. The four have agreed that five editorials per year from each would be a manageable task.

A special meeting of the Standard Bearer staff was held in February of this year to discuss the proposals recommended by the search committee. The staff likewise was of the mind that one man as editor-in-chief is much to be preferred. In the end, they agreed that a shared editorship would work as an interim measure, and therefore approved the concept and appointed the four men recommended by the committee. At the recommendation of the search committee, the staff also decided that Prof. Dykstra should handle the immediate decisions necessary for the week-to-week operations of the Standard Bearer. 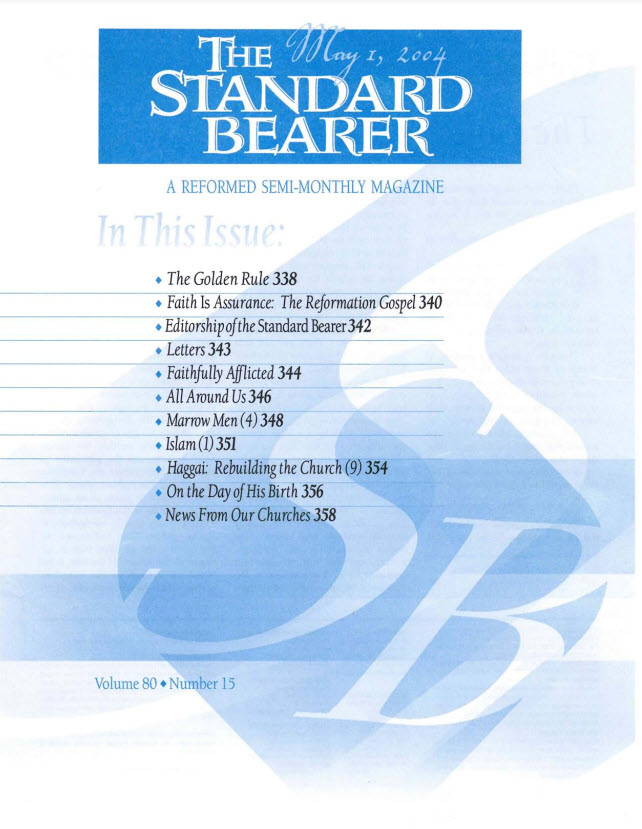