Our readers probably noticed the omission in the May 1 issue of the Rev. B. Woudenberg’s department, A Cloud of Witnesses. This was not an intentional omission by your editor, but was due to a mistake on the part of the firm which is responsible for our composition-work.

An apology is also in order for the tardiness of the May 1 issue. This also was not the fault of the editorial department. Fact is that most of the copy for that issue was in well in advance of the deadline. Our aim is to get the Standard Bearer out promptly on the first and the fifteenth of the month. But our composition-man failed us also in this regard, so that the May 1 issue did not actually go to press until April 29. We have a promise that this will not happen again.

Occasionally we hear comments about the critical and defensive approach of the Standard Bearer, particularly in the editorial department and in All Around Us. Let it be known hereby that this is not unintentional, but very purposeful and highly necessary. The ecclesiastical scene today is a sad and alarming one. This is true both of the general picture of the church and of the more limited picture of the Reformed community. Everywhere today there is ecclesiastical ferment and turmoil. Ecumenicism, compromise, doctrinal freedom, and revisionism, on the one hand, and a floundering, hopeless attitude, on the other hand, are everywhere evinced. One is inclined to ask with the psalmist, “If the foundations be destroyed, what shall the righteous do?” For there is indeed reason for alarm. And in this situation our Standard Bearer finds it necessary to repeat and repeat and repeat the old (but ever new and rich) truths of our Reformed heritage, and to call upon all those who still love that heritage to stand fast. This repetition is highly necessary in such an age as this for us Protestant Reformed people and our children; and it is also our hope to reach and to encourage others to take a firm stand.

The 1966 Synod of the Protestant Reformed Churches will soon meet, D.V., in Doon, Iowa,—a salutary change after several successive years of meeting in the Grand Rapids area. Judging from the Agenda, this Synod will be largely positive, and will probably spend most of its time on matters pertaining to our seminary and our mission work. It is rather striking that both major standing committees, the Theological School Committee and the Mission Board, are asking for enlargement, due to the amount of work they must accomplish. Perhaps this would be an opportune time for Synod to consider making these committees more representative of the denomination also, instead of limiting their personnel to the Grand Rapids area. Or, if that change cannot be accomplished on such short notice, let Synod initiate a study to that end. I believe there are many good reasons for such a change and that these reasons outweigh any inconveniences which the change might produce. May the Lord bless our Synod in its labors.

It may be reported that my recent series of three lectures will appear in booklet form in the very near future. A sub-committee of the Mission Board has completed arrangements for publication, and the printing is already under way. Watch for further announcement. 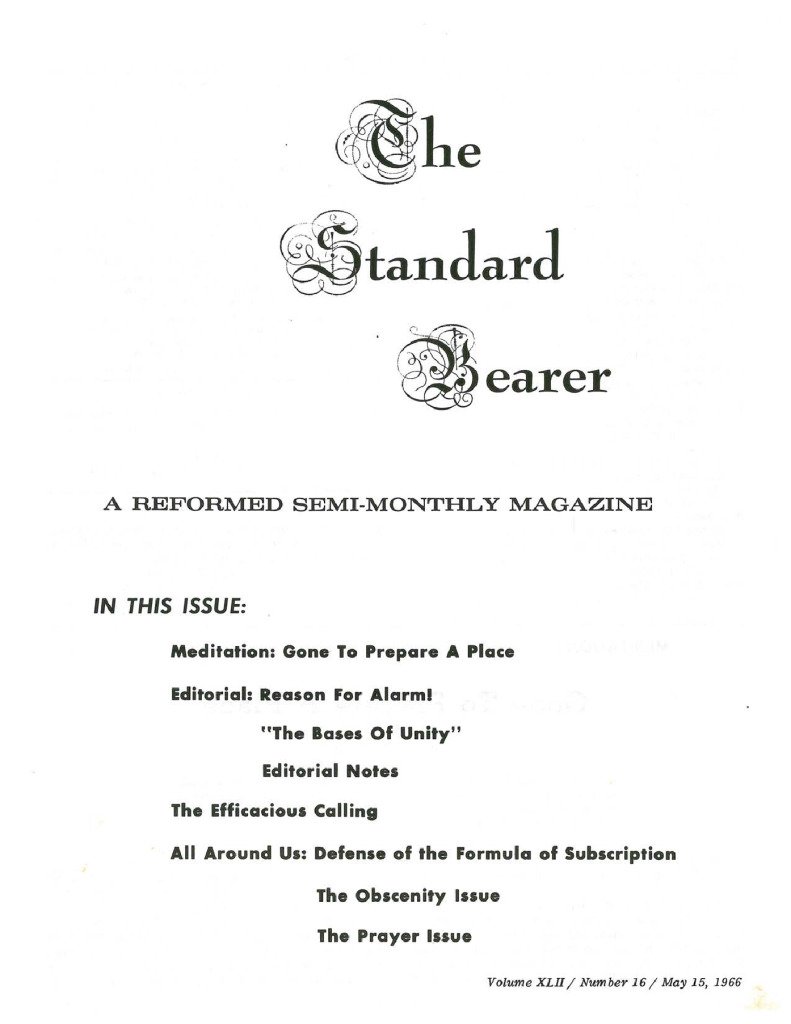