On this subject wrote W. Heerma in The Messenger of August, 1960, a publication of the Free Christian Reformed Church of Canada. Mr. Heerma wrote this article under the title: “Geen Probleem Zelfs Meer.” (Not Even a Problem Anymore.)

The reader must understand that the churches in the Netherlands celebrate the day of Pentecost on two days, Sunday and Monday. Well, according to Heerma, the Reformed. (Gereformeerde) Church of Eindhoven celebrated that second day of Pentecost, not by having services in the church, as was customary in my day, but by a garden-feast (tuinfeest) in which a drama was enacted, a show of a dollhouse (poppenkast) was one of the numbers on the program, and the younger generation were dancing to their hearts content.

On this Mr. Heerma offers his criticism and he attributes this to the evil theory of “common grace.” Writes he (I translate):

“The background of this current development of things with the Reformed people (and, alas, not only with them) must, in my opinion, be sought in the doctrine of so-called COMMON GRACE. Dr. A. Kuyper was in his days the champion of this unbiblical theory. One can best translate the term ‘common grace’ by ‘general grace’ which must well be distinguished from general atonemeit. By general atonement is meant the doctrine, that Christ suffered and died for all men, that He gave His life,’ not only for the sheep, but just as well for the goats. Arminianism has the floor here (‘is daar aan het woord’).

“Kuyper and his followers do not teach this.” His work: ‘That grace is particular’ shows clearly that he must have nothing of the doctrine of general atonement.

“But thanks to common grace there is still very much good in this world that fell away from God. Also the children of this world can still perform much good, can produce many beautiful things. Think, for instance of art, the art of poetry, the art of painting, the art of films, the art of sculpture, etc. All this is to be attributed to the so-called common grace.

“Thus the covenant children come to sit as guests at the table of common grace. They leave their places in the ministry of the Word empty with a ‘good’ conscience and lie on Sunday afternoon with the children of the world on the beach in order to enjoy God’s beautiful nature. All this so-called to the glory of God.

I received a letter a few days ago which was not intended for publication in our Standard Bearer, as far as I could gather, in which the author criticizes me for two things: 1. that I call those that created a schism in our churches “schismatics” and 2. that I attribute the downward grade of the Christian Reformed Church to the adoption of the unbiblical theory of “common grace” and the Three Points by the Synod of 1924.

It is to be hoped that he reads the opinion of Heerma as expressed in the above quotation. The Reformed Churches in the Netherlands never officially adopted the theory of “common grace” is developed by Kuyper in his three volumes of “De Gemeene Gratie.” Yet, the unofficial development of that theory has, according to Heerma, the effect of leading the people of God right into the world and causing them to be worldly-minded.

That the Romish Church condemns the separation of Church and State is not only well-known but is also clearly expressed in their official documents. Thus, for instance, in the papal “Syllabus Errorum” a Syllabus of Errors, a brief condemnation of existing doctrinal errors.

This syllabus was issued by Pope Pius IX on Dec. 8, 1564. Of course, the fact that it is issued by a pope makes a document binding upon the entire popish church, for when the pope speaks in his official capacity he speaks infallibly. Whatever he declares is as authoritative and infallible as Scripture itself. This Syllabus condemns the teaching:

“That kings and princes are not only exempt from the jurisdiction of the Church, are Superior to the Church in litigated questions of jurisdiction.”

Hence, according to the official expression of the pope which is the same as saying the Church, the State, in matters of civil law, must first look to the pope for approval before such laws can be issued and become authoritative. But there is a still more emphatic expression in the same Syllabus in which literally the doctrine of separation of Church and State is condemned as false. This article reads as follows:

“The Church ought to be separated from the State, and the State from the Church.”

Understand that this is condemned as an error. And this implies the teaching that Church and State ought not to be separated. It also implies that, according to Romish doctrine the State is under the Church and the Church which is the pope is the supreme power and authority, not only in regard to ecclesiastical but also in civil matters.

How Mr. Kennedy, in the light of the above, can run for president of the U.S. I fail to understand for the U.S. stands for the principle of the separation of Church and State.

If, as he already expressed himself, he also holds fast to the principle of the separation of Church and State, he is not a good Roman Catholic and he ought to separate himself from the Romish Church. If, on the other hand, he still maintains, according to the official position of the Roman Catholic Church, that the State ought not to be separated from the Church and the latter is supreme over the former, he cannot conscientiously hold the office of president of the U.S.

My answer is, first of all, that the Roman Catholics condemn all instruction of the children and youth that is not under supervision of the Romish Church. They not only condemn the public schools, but also all free Christian schools. If they, ever obtained the civil power of the State, they would not only make the latter subject to the Church, but they would also insist that all the children would be educated only in Roman Catholic schools.

For proof I refer once more to the Syllabus of Errors to which I already called attention above. Syllabus 45 condemns as an error the following:

“The entire direction of public schools, in which the youth of Christian states are educated, except (to a certain extent) in the case of episcopal seminaries, may and must appertain to the civil power, and belong to it so far that no other authority whatsoever shall be recognized as having any right to interfere in the discipline of the schools, the arrangement of the studies, the taking of degrees, or the choice and approval of the teachers.”

Positively expressed this means that only the Romish Church, that is the pope, shall have control over all the education of the children and the youth in the State.

The second reason for including the matter of Christian schools in the subject and material of this article is that in the magazine Christianity Today I read an article that was addressed to Senator Kennedy in which the author asked several questions of the senator as to what he would do if he should become president of the U.S.

With most of this article I heartily agree and I hope that Mr. Kennedy will give a clear-cut reply to the questions that are asked him.

However, I cannot agree with all that the author writes under the caption: “Public Versus Parochial Schools.” I will quote the following paragraph:

“An alien phenomenon in our American democracy is the widespread withdrawal of Roman Catholic children from the public schools into Catholic parochial schools. Our public school system is an expression and guarantee of our democratic government and a. prime factor in maintaining our cultural unity. The public school has been rightly called the ‘melting pot’ in which the immigration of heterogeneous cultures of many countries is fused into a national unity. This unity does not mean and has never meant cultural conformity. It has meant and has produced cultural freedom. The parochial school of the Catholic Church is oriented to an exactly opposite goal, namely the fixation of the mind in every generation in the mold of its childhood dependence upon an authority in the field of religion. This is the field in which the greater problems of life arise. The technique of this procedure includes teachers dressed in conspicuously unfamiliar garb, and a pedagogy—not precisely of ‘brainwashing’ but of brain-conditioning against infection by the democratic principle of personal responsibility, and freedom.”

2. We do not believe in parochial schools which are church schools and secular education is not the task of the Church. 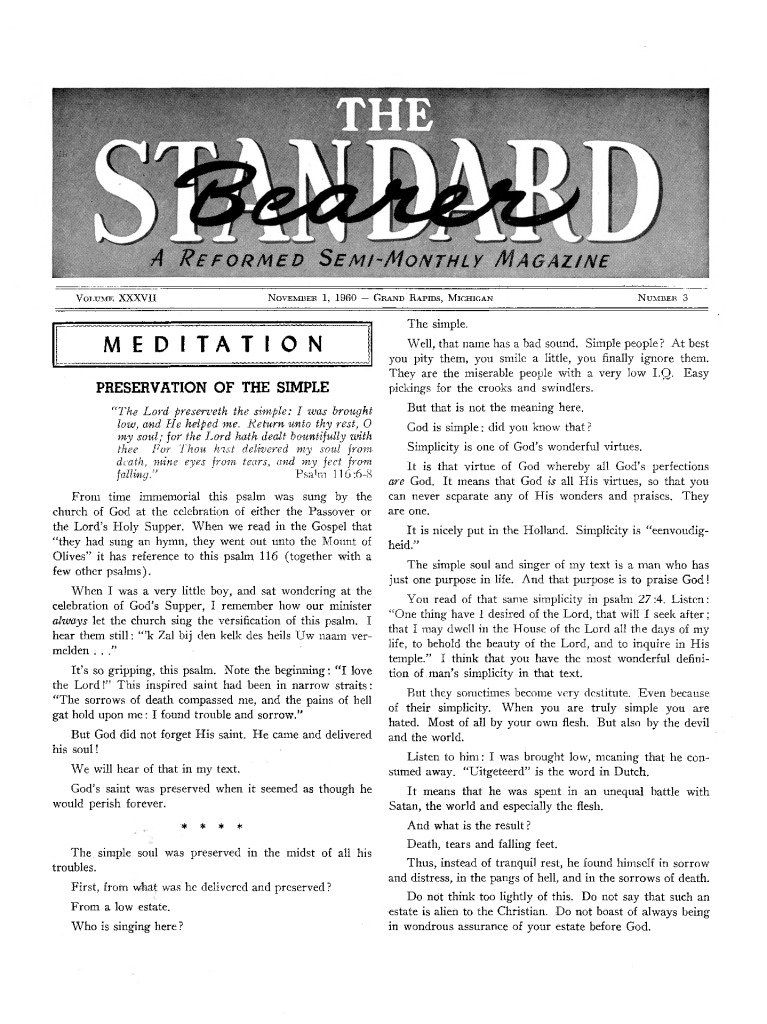