Since our discussion of this subject is rather protracted and has been frequently interrupted, it may be well to remind ourselves of the question under discussion. In general, it is this: is the doctrine of a “free offer” of the gospel, as set forth in the Murray-Stonehouse pamphlet, The Free Offer Of The Gospel, and as maintained by the Orthodox Presbyterian Church (among others!), consistent with our Reformed confessions?

At this point, however, it would seem that the authors feel they have gone a little too far in stressing what in the next paragraph they again call “a real disposition of lovingkindness inherent in the offer to all.” For in the conclusion of the paragraph they throw some sand in the eyes of the reader: “And the word ‘desire’ has been used in order to express the thought epitomized in Ezekiel 33:11, which is to the effect that God has pleasure that the wicked turn from his evil way and live. It might as well have been said, ‘It pleases God that the wicked repent and be saved.’ ”

Now here is a stellar example of the kind of language which confuses the simple and unwary and which is (deliberately?) calculated to try to drive any denier of the offer-theory between a rock and a hard place. If anyone denies the well-meant offer, he is now going to be suspect of denying Ezekiel 33:11. And that, of course, is much worse than being against apple pie or motherhood. But let me make it crystal clear: 1) That I do not deny Ezekiel 33:11. When the proper time comes in the later discussion of this pamphlet and this offer-view, we will explain the passage. 2) That I can even defend the proposition, “It pleases God that the wicked repent and be saved,” — though not in the context in which the Murray-Stonehouse pamphlet paraphrasesEzekiel 33:11. 3) That it is by no means the same to say, “It pleases God that the wicked repent and be saved,” as to say, “God delights that those to whom the offer comes would enjoy what is offered in all its fullness.” The former statement can be understood to mean that it is right in God’s sight that the wicked repent, and that He is pleased to save those who do repent. The latter statement can only mean that God is so filled withlovingkindness toward those to whom the “offer” comes (reprobate as well as elect!) that He wants them all to enjoy salvation. And the latter, of course, is nothing but universalism!

Would that the proponents of the offer-theory would use in their explanations of their theory language that is as precise and unequivocal as is the language of our confessions in setting forth the truth of sovereign, particular grace! Then all would know where they stand, and then the people would not be confused.

We shall have to return to this matter of linguistic hocus-pocus later: for the pamphlet is replete with such confusing language.

But now let us return to the business at hand.

We have been demonstrating that the offer-theory is contrary to out Reformed creeds. And thus far we have limited our proofs to Chapter III of the Westminster Confession of Faith. From this chapter we have seen that this confession not only dos not allow room for a disposition of lovingkindness of God toward the reprobate, but positively excludes it. Mind you, this means that the major premise of the offer-theory is shut out by the Westminster Confession.

However, we need not appeal only to Chapter III. The simple fact is that this entire theory is contrary to thecurrent teaching of the Westminster Confession; it is foreign to it. If only people would get back to the confessions and their language, they would begin to have deep problems with the offer-theory. For the language of the confessions is sharp and distinctive.

Turn, for example, to the chapter on “Providence,” Chapter V, paragraph 6:

Once more we call your attention to the fact that in the full edition of the Westminster Confession of Faith the Scriptural proofs are printed in full. We have given only the references, for reasons of space. We strongly advise the reader who is interested in this subject to look up these passages of Scripture. They clearly confirm what the Confessions states, and they make it abundantly clear that the whole notion of a will of God to save all and a divine disposition of lovingkindness toward the reprobate-ungodly is utterly foreign to the Scriptures — foreign not merely to some isolated proof-texts, but foreign to the current thought of Scripture! It will be well worth the time to look up the texts referred to. (To be continued )

Once in a while editorial-writing is an easy task and a very pleasant one.

This is one of those occasions. Our genial business manager rather regularly keeps me informed, either by telephone, by mail, or in person, concerning incoming R.F.P.A. mail. Once in a while a letter intended for me reaches him first; but most of the time the mail is business-mail, having to do with subscriptions, renewals, book orders, etc. Our business manager, who is supposed to be retired but who is actually kept very busy by his R.F.P.A. “sideline,” gets a surprising amount of such business-mail. Not infrequently his mail will include an encouraging note about the work of theStandard Bearer. And very often when subscribers send in their renewal money, they will include an extra gift. Besides, the mail brings collection-checks from our supporting churches.

Well, it seems as though since our annual R.F.P.A. meeting — at which we received news of a substantial increase in publication costs — this mail to our business manager has been especially heavy. And our business manager called my attention to this fact, and gave me a suggestion to put a note of thanks in my editorial columns. I agreed heartily. And that makes this a very easy and pleasant editorial to write.

I can do no better than to quote directly from a couple of Mr. Vander Wal’s notes to me. He puts it very forthrightly in a note written October 6: “Honestly — it’s amazing! I haven’t finished opening all of the mail which I picked up today from Box 6064, but have opened only three out of the ten received today. First one opened came from Kalamazoo, Mich. — renewal, $7; check for $10. No. 2 — from Byron Center — renewal $7.00; check received for $20. No. 3 from Downey, California — check for $15! I’ll open a couple more: from Chicago — renewal $7; check for $10. From Grand Rapids, $10. Another from Grand Rapids, $10. From Lansing, Illinois — $10. I got to thinking, while opening these envelopes — do you know thatwithout these $10, $15, and $20 checks we would be ‘out of business’? If all of the subscribers would send only the $7 renewal fee, we’d go for broke! It costs about $8.50 per subscription per year-to print and mail each subscriber his 21 issues each year. Without these extra gifts, and the collections from our Protestant Reformed churches, we surely would be out on a limb!”

From another progress report I glean the following sample of just one of four deposits which our business manager had made up to the 12th of October:

Do you wonder that Mr. Business Manager exclaims, “Isn’t that something, though!”

This is gratifying. It is gratifying to the Board and to our Manager. It is gratifying to the staff to know of the royal support that our magazine receives. And it will be encouraging, I am sure, to our constituency to learn of this. Personally, I heartily concur with Mr. Vander Wal when he writes me: “I believe that a ‘thank you’ note should be printed in a forthcoming issue of theStandard Bearer, a note which would explain to the readers and to the contributors just exactly how much their contributions mean to the support and the continuation of our paper.”

Well, here is that “thank you.”

And I want to add that I thank my God for this evidence among you of your dedication to the cause of His truth, the faith of the gospel of Jesus Christ. 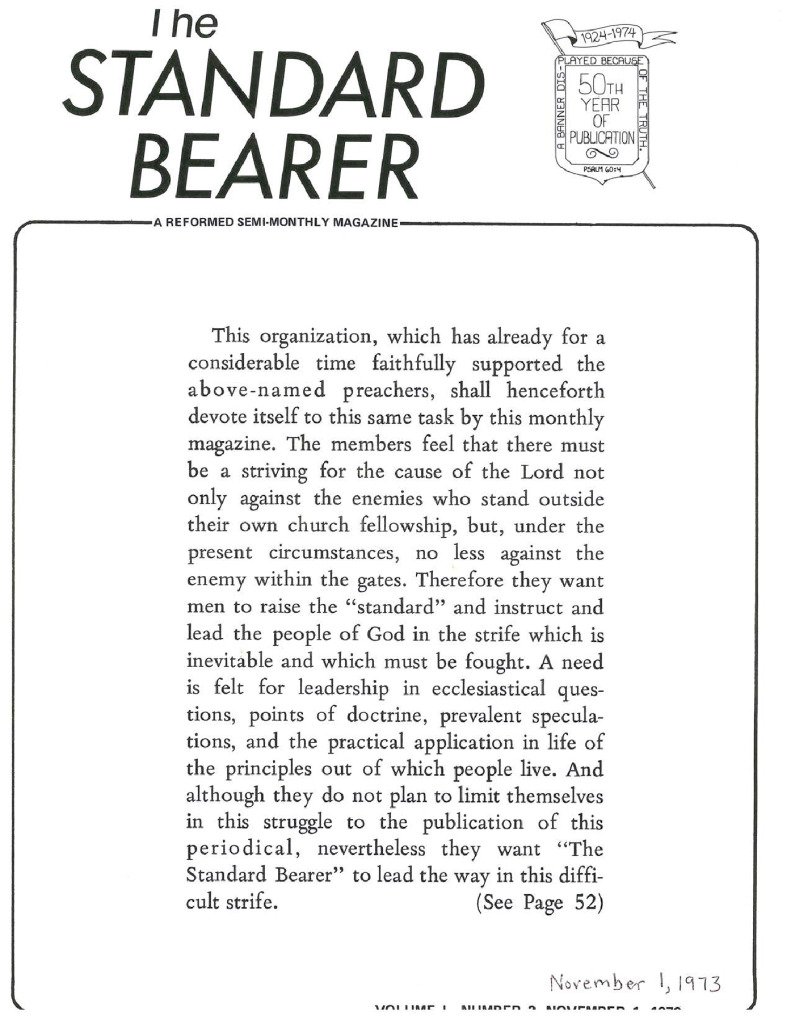