Ecumenism assumes many forms and shapes. The subject does not necessarily involve immediate merger of churches, but “ecumenism” is concerned with anything which would lead to unity. We may be reminded, too, that there can be both a good and bad ecumenism. It is true, as far as our churches are concerned, that the ecumenism of our day is for the most part evil. Churches are seeking unity not in true faith nor properly based upon the work of Christ on the cross.

On “Good Friday” of this year (and past years) there was evident also a form of ecumenism. On this church holiday, more than on any other, churches and ministers find occasion to worship and pray together. It would appear that the commemoration of the suffering and death of Christ is one fact upon which most denominations and churches can agree. Therefore it becomes also the occasion for divergent groups to meet in a combined commemoration service—a sort of foretaste of what complete unity will really be.

This writer can produce at this time certain indications of ecumenism on Good Friday only as these were evident in the city of Grand Rapids, Mich. Doubtlessly, the reader can himself furnish evidence in his own locality of similar “ecumenism.”

The Grand Rapids Press contained various ads on Wednesday and Thursday preceding Good Friday inviting the public to various commemorative services to be held within certain specified church sanctuaries. An article was also included in the same Press giving information on an interdenominational “peace vigil” to be held on Good Friday.

There were at least three advertised interdenominational Good Friday services. One was held at the Trinity Reformed Church with seven speakers from the Reformed and Christian Reformed churches, each speaker addressing the audience with an exposition of one of the seven “cross-words.” The service was held from 1 to 3 p.m. on Good Friday. I have no further comment on this particular service.

The fourth instance of “ecumenism” was a “vigil for Peace.” The article stated:

Seven local ministers . . . will take part in a Good Friday peace vigil which will get under way at noon Friday at the Pearl St. entrance of the Federal Building.

Sponsors will be the Kent County Chapter of the Women’s International League for Peace and Freedom, and the 5th District Chapter of the Michigan Conference of Concerned Democrats.

Each minister will lead the group in a three minute prayer at half-hour intervals, beginning at noon. . . .

The speakers at the above “Vigil for Peace” included three from Methodist churches, two from the Christian Reformed Church, and one from the Roman Catholic Church.

What must one say of the above “ecumenism”? I would state that I hesitate to draw too many conclusions on the basis only of advertisements. I was not personally present at any of the above “services,” therefore I can not judge concerning the content of the messages presented. Possibly many of them were entirely in harmony with God’s Word—this I could not either deny or verify. I am not certain, either, who were the sponsors of the “services” advertised. The location of the services was identified, the church affiliation of the speakers was identified—but I do not know if the church where the service was held sponsored the affair, or if it were a joint venture of the churches whose ministers spake, or if it rep resented a venture sponsored by the ministers who spake.

However, certain points can be noted. First, I believe that a trend can be observed over the past years. Joint Good Friday services were rather common for a number of years. But these services have come to include more and more diverse denominations in recent years. The advertisements which I quoted above reveal that even a minister from a completely modernistic church can speak from the same pulpit as does a minister from the Christian Reformed Church. A Roman Catholic priest can speak at the same service with ministers from Reformed churches. One can expect to hear of more of this in days to come.

Secondly, the ministers and their church affiliation are identified by name. Now it is conceivable that a minister could have agreed to speak at these “ecumenical” services without the consent of his consistory and without reflecting any definite position of his denomination. A minister might conceivably claim that he speaks only as an individual apart from his office or position in a denomination. Nevertheless, it is strictly not possible to separate a minister’s office from his extra-curricular activities. His name and his title are inevitably presented together. And if his church affiliation is not identified in print (though in the above quoted instances this affiliation WAS identified), a man and his denomination are nevertheless linked together in the minds of the readers. Though it may not have been the speaker’s intent, his action affects both his office and his denomination.

Men, ordained in specific offices, identified with specific denominations, revealed their desire for the unity of the church. Men, participating in these Good Friday services, have revealed the type of unity they seek. And the unity sought is not good—for this is not the unity of which Scripture speaks. The unity sought is evident in that seven or eight men speak on aspects of ONE SUBJECT. That one subject was the Word of the Cross. How can a Christian Reformed minister and a Reformed minister and a Presbyterian minister and a Roman Catholic priest and a Modernist minister speak forth from one pulpit on such a theme? Though each spoke according to his own convictions, there was the attempt to unite light and darkness together to sing forth the praises of the Cross. Such is wicked unity.

The unity was manifest also in that all were invited to hear each of these speakers. Whether the speaker was Littlefair (modernist) or Beahan (Roman Catholic) or Eppinga (Christian Reformed), the program was commended to all. Whether a speaker had always denied the atonement of the cross or another speaker supposedly had maintained that cross as Scripture sets it forth, the community was invited to hear both. That is ecumenism in action.

All this is but a foretaste of that unity which can be had under the direction of ecumenists. The idea of speaking together and listening together is being implanted in the minds of all peoples of all sorts of denominations. If a Littlefair and an Eppinga can speak from the same pulpit on Good Friday, then later on some Sunday they can also exchange pulpits. Why not?

A child of God ought to promote true Scriptural unity. On the other hand, he ought to oppose that which is not the fruit of the unity of which Christ speaks. Though the men involved probably agreed to speak for the united services on Good Friday without being delegated or sent by their local church or their denomination, yet the local church and the denomination were identified in connection with the introduction of each speaker. To this a faithful Christian of a denomination so involved, ought to object. Why should the public receive in any way the impression that the actions of a few men within a denomination are representative of that of the entire denomination?

Secondly, one should object particularly when aminister of the gospel is engaged in such united services. Though a man agrees to speak as an individual rather than as a minister, the fact is that a man and his office are not so easily divorced. As long as one would remain in the office of minister of the Word of God, he must remember that his every action reflects upon the office itself. In the minds of others it is not that Mr. So-and-so speaks, but Rev. So-and-so that does. Certainly one in this office reflects also upon his office when he agrees to speak with others in the commemoration of Christ’s death.

Finally, a strong warning must be uttered. As the rain upon the rocks, as the waves on the seashore, so too ecumenism: there is not sudden transformation and change, but the change comes little by little. The waves erode the seashore little by little. Ecumenism also does not suggest that denominations unite tomorrow, but seeks to introduce their own misconception of unity a little at a time. When man has become accustomed to united Good Friday services, then other united services will be introduced. So will the idea of false unity develop and grow. Beware, therefore, for ourselves and for our covenant seed. Be aware of the erosion that is in progress. Point it out to your children. Unity must be sought, but there must be no form of unity with a Littlefair or with the Roman Catholic Church from which we were once rightly separated. Light and darkness may not unite. Hold fast, then, to the truth. 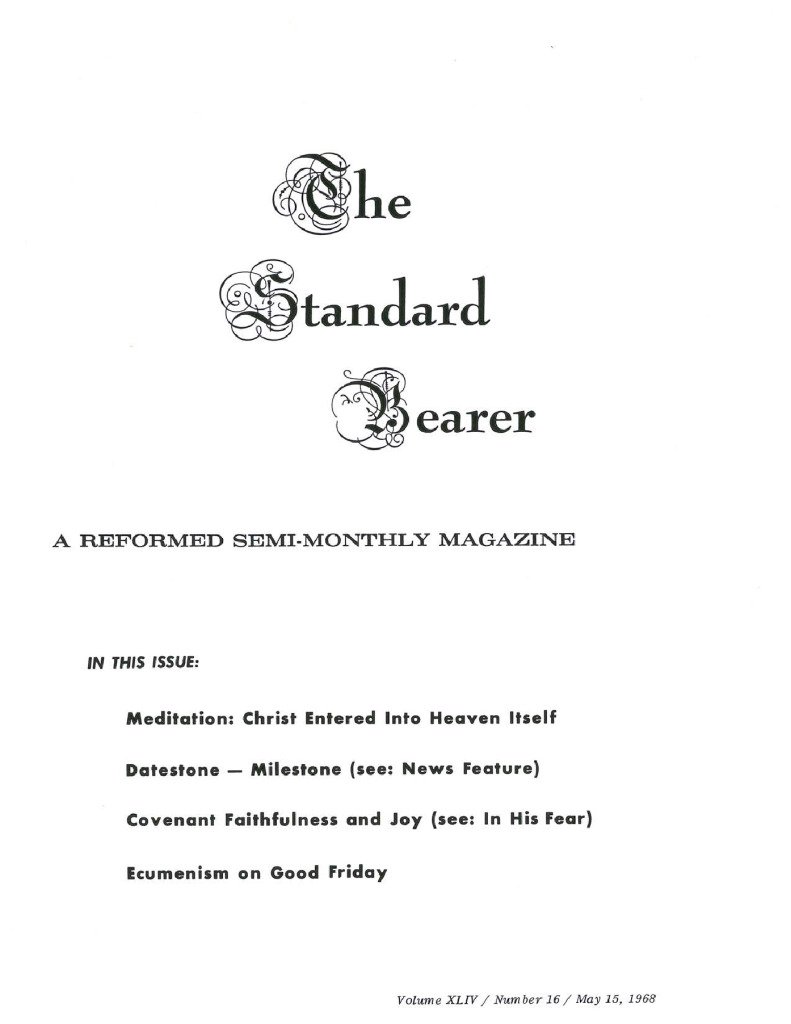