At the conclusion of his first article on “The Logic of Election” James Daane promised to show in a second article why Reformed theology thinks of election in terms of numbers. That second article appeared inThe Banner of April 14, 1978. The article is outstanding probably for only one reason, namely, that for a change Daane wrote an entire two pages on the subject of election without so much as mentioning Herman Hoeksema. I would almost begin to think that Daane is slipping. However, on second thought, the reason probably lies in the fact that Herman Hoeksema is so thorough a foe of all individualism in his theology and such a champion of the corporate and organic unity of Christ and His church that even Daane hesitated to attack Hoeksema this time.

For in this second article Daane’s big complaint is against the alleged individualism of Reformed theology and of the Canons of Dordrecht. This is supposed to be the big reason why Reformed theology thinks of election in terms of numbers.

However, Dr. Daane’s entire argument on this score is full of distortions.

Before I refer to these distortions, I wish to make the point once more that Dr. Daane is coming out of his corner, and in doing so is making plain what I always claimed concerning him and concerning anyone else who does not believe the doctrine of sovereign reprobation, namely, that he does not want and cannot hold on to the doctrine of sovereign election. Time was when men like Berkouwer and Daane—making their appeal incorrectly to the non eodem modo, “not in the same manner,” of the Conclusion of the Canons—claimed that the doctrine of reprobation found in Canons I, A, 6 and 15 was really foreign to the true spirit of Canons I and its doctrine of sovereign election. They claimed that the statement of the Conclusion was really a corrective to Canons I, A, 6 and 15. Now, however, we see a shift in Daane’s thinking. He now attributes the incorrect view of reprobation, which, according to him, the Canons teach, to an incorrect view of election. He finds individualism both in Reformed theology and in the Canons when it comes to the doctrine of election. This individualism, according to Daane, leads to a logic of number in election. And this logic of number leads to the doctrine of reprobation.

But more than this, Daane is openly critical of the Canons of Dordrecht when it comes to the doctrine of election. This is contrary to the Formula of Subscription, of course; but Daane can get away with that in the Christian Reformed Church, just as Harry Boer did. The difference is that Daane is permitted to do this in the official periodical of the Christian Reformed Church, while Boer was confined to a recognized liberal periodical, The Reformed Journal. Dr. Daane writes:

What I would want the reader of these lines to recognize is this: creedally and even theologically, we have only a very partial, fragmentary doctrine of individual election, one that is neither set in nor shaped by the whole Biblical doctrine of election. And it is on the basis of this Biblically deprived and impoverished view of election that we, via the logic of numbers, so largely based the doctrine of reprobation.

Again I say: I am glad about this. I am glad not because Daane denies election; I would much rather see him confess it. But I am glad because Daane is confirming, black on white, what Reformed men have always maintained and what we have frequently emphasized, namely, that the denial of reprobation leads inevitably to the denial of election. James Daane is Exhibit No. 1 in proof of this contention.

Let everyone who is afraid of the Reformed doctrine of reprobation or who is inclined to soft-pedal or to compromise it take note of this, and let him take warning.

And let the Christian Reformed Church, which is confronted by Harry Boer’s gravamen against reprobation, take note of this. I believe that the CRC severely compromised both election and reprobation already in 1924 by the Three Points, and that the theological aberrations of men like Boer and Daane are but the logical outgrowth of that denial—helped along, of course, by G. C. Berkouwer. Nevertheless, the Christian Reformed Church is now being asked officially to discard the doctrine of reprobation as taught in the Canons. Let the CRC be warned from Daane’s writings that if it discards reprobation, it will also discard the Reformed doctrine of election. What it will have left is a choice between traditional Arminianism or the vagaries of Daane’s dabblings, according to which “the clue to election—in an admittedly complex manner—is openness and inclusion.”

But what about those distortions which we mentioned?

Dr. Daane deliberately confuses the teaching of individual election and individualism, meanwhile never actually telling us what individualism is. This is the foundation of his argument, although he never deals with a single one of the many passages of Scripture which speak of individuals being elect, never makes it plain how it is even logically possible to conceive of individuals except numerically, and never shows what is wrong—either Biblically or logically—about thinking of election in terms of numbers.

Let Daane answer with a Yes or a No this question: did God from eternity choose some men? If he answers Yes, then he must concede that election is numerical, and also that God did not choose others. If he answers No, then he is left to choose between a total denial of any personal election or the error of universal election (God chose all men.)

.Now let Daane prove—with facts, not just with empty claims—that Reformed theology or the Reformed creeds are individualistic in their view of election. I make bold to say: he cannot!

The second distortion is a matter of the history of doctrine.

Anyone at all acquainted with the history of doctrine will know that it is nothing short of preposterous to accuse Reformed theology and our Reformed creeds of individualism. But perhaps Daane has been associated too long with a fundamentalistic seminary such as Fuller.

Who are the theologians who hold to individualism?

They are the Pelagians, their half brothers the Semi-Pelagians, and the Arminians who, as our fathers put it, brought again the Pelagian error out of hell. In fact, the watchword and the fundamental error of Pelagianism is individualism. This is the underlying reason why Pelagianism and Arminianism always deny original sin and teach instead that man becomes corrupt only by imitation. This is why Arminianism denied that Christ really died instead of anyone, that He represented anyone, but that He made salvation possible for all men. This is why Arminianism also preaches a gospel for all men, the more the merrier.

Now mind you, the fathers at Dordrecht were fighting Arminianism and its individualistic view!

And Daane calls Reformed theology and the Canons individualistic? That’s too big a lie to swallow!

Daane is guilty of incipient dispensationalism.

Repeatedly he speaks of “the election of the nation of Israel” and the “election of the church” as though they were two distinct things. Now apart from the fact that Daane’s whole theory of the election of Israel is errant, he apparently makes separation between Israel and the church. This is a separation which Scripture never makes. In fact, Scripture refers to Israel as “the church in the wilderness.” And. our creeds emphasize that the church is gathered not just in the new dispensation, but from the beginning to the end of the world. That includes Israel, therefore. But to separate between Israel and the church is characteristically dispensational.

By the way, let Daane apply the non-individualistic, organic idea to the election of Israel, and he will discover that the lines of sovereign election and reprobation cut right across the generations of Israel, that not all is Israel that is of Israel, and that Israel is God’s chosen people only organically, because of the presence of the “remnant according to the election of grace,” what Isaiah 6 calls “the tenth.” Woops, there’s that numerical election again!

Our confessions speak only of individual election and are individualistic?

One wonders whether Dr. Daane troubles himself to read the creeds.

How about Question and Answer 54 of the Heidelberg Catechism: “That the Son of God from the beginning to the end of the world, gathers, defends, and preserves to himself by his Spirit and word, out of the whole human race, a church chosen to everlasting life, agreeing in true faith; and that I am and forever shall remain, a living member thereof.” (italics added)

How about Canons I, 7, the definitive article on election? There we read: “Election is the unchangeable purpose of God, whereby, before the foundation of the world, he hath out of mere grace, according to the sovereign good pleasure of his own will, chosen. . . .a certain number of persons to redemption in Christ, whom he from eternity appointed the Mediator and Head of the elect, and the foundation of salvation.” (italics added)

How about Canons I, 10, the very article which stresses personal, definite election? It has often been overlooked that this article speaks not only of individuals, but of a whole, a body: “. . . but that he was pleased out of the common mass of sinners to adopt some certain persons as a peculiar people to himself. . . ” (italics added)

How about Canons II, 9? It speaks of God’s accomplishing His purpose of election “so that the elect in due time may be gathered together into one, and that there never may be wanting a churchcomposed of believers, the foundation of which is laid in the blood of Christ, which may steadfastly love, and faithfully serve him as their Savior, who as-a bridegroom for his bride, laid down his life for them on the cross, and which may celebrate his praises here and through all eternity.” (italics added)

How about Canons V, 15? It speaks of the church, too, as “the spouse of Christ.”

These are just a few of the many indications in our confessions which show that they are not at all individualistic in their view.

Frankly, I cannot understand how anyone gets it in his head to call Reformed theology. and our Reformed creeds individualistic in their approach to any doctrine, much less election. 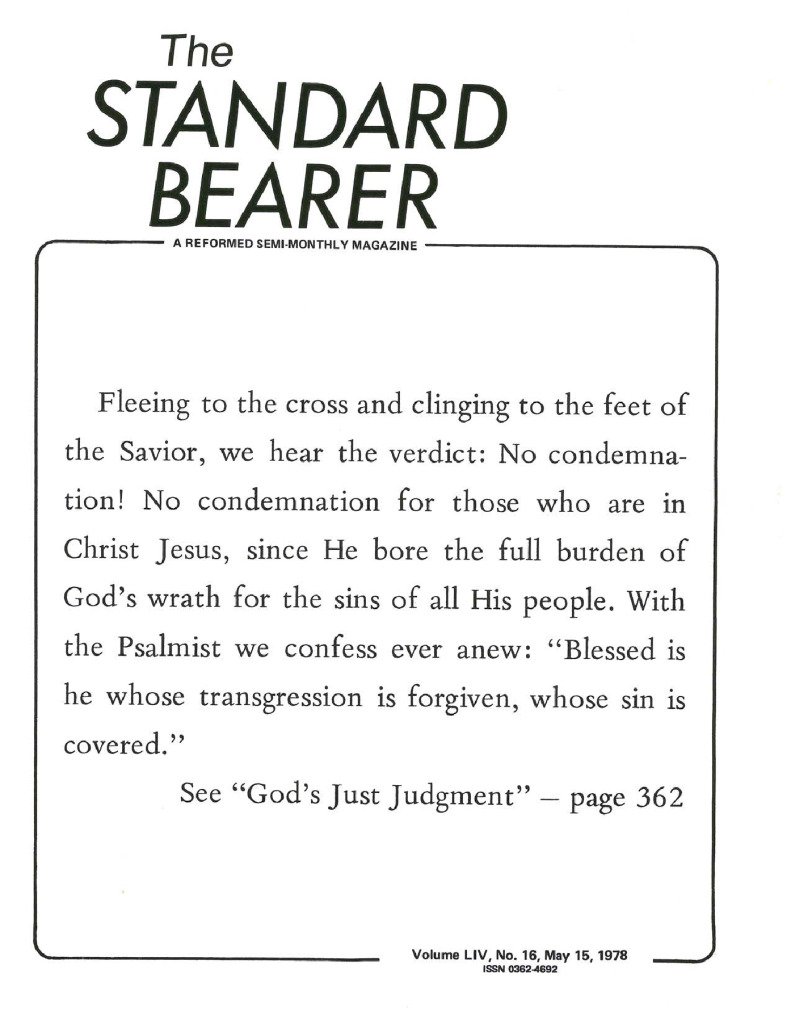