The name comes from the Russian dukhabortsy, meaning “spirit-wrestlers,” which signifies in the divinity of man the struggle of his soul with the god within, thus disclosing an inherent albeit unphilosophical pantheism. An illiterate peasant cult, it ‘stems from the Raskolniki, schismatics, from the established Russian Orthodox Church. It denies the objective, written Word of God and the sacraments. It also rejects government, which it regards as a Pharaoh persecuting the Hebrews in Egypt. In fact, all external authority, including that of the Bible, they reject. Anarchistic and anti-authoritarian they are, recognizing no rule, no leader, except reason and conscience, and abjuring war, taxation, education, law courts, police regulation and the modern order of society. Here lurk the seeds of an innate nihilist philosophy. They also abstain from animal food, intoxicants and tobacco. This latter practice is not in the interest of health or holiness, but, as it is charged, because they are extremely masochistic, that is, they delight in the constant infliction of pain and suffering upon themselves. It is further believed that for this reason they claim to be living examples of the three Hebrew children in the fiery furnace, and are built not on the foundation of the apostles, but of the Twelve Death Angels.

One of the early leaders of the band was Kapoustin. He claimed to be a reincarnation of Christ, reminding us of Hinduism, Theosophy and Baha’ism. He established the practice of community of property in opposition to the “iniquity of private ownership,” the root of all evil. Yet he and his family controlled large communal estates. (In Communism, The Party controls the people.) But in Canada their Communist life failed again and again. Under this leader in 1841-44 the cult was banished from Russia for its crimes, especially that of assassination. The principles of Communist class struggle and revolution are imbedded in this cult.

Another notable character was Verigin, who in 1892 was banished to Siberia where he learned Leo Tolstoy’s Communism. He named the cult “The Christian Community of Universal Brotherhood,” and taught the equality and brotherhood of man, that all people of the world are children of God. He was regarded by some of the ignorant members as a superman.

The Veriginite Dukhabors migrated, some to Cyprus, and some to Canada, in 1898. One authority sets their number at that time as 7,363, another as 7,427, while their present number in Canada is adjudged by some to be 20,000, others put the figure at 11,759 while still others claim that number to be from ten to twenty per cent too high. The 1951 census records the total of 8,170.

The Catholic Encyclopedia says that the Dukhabors in Canada are “good colonists.” They are said to be generally well-mannered, hospitable to strangers, rather passive, showing a smiling politeness. It is also said that a spirit of resentment is harbored against all of the outside world, and that particularly the women, who live a more sheltered life than the men, are more aggressively hostile to outsiders. The extremists among them, the die-hard Sons of Freedom, who claim to be pacifists, are notorious for their Ku Kluxer tactics, their nudist protest pilgrimages, arson (i.e., burning of property, their own, the neighbors and the government’s) and dynamitings. Also a good bit of extortion, exploitation and hoodlumism goes on among their own number.

Despite what is factually reported in the first paragraph, it nevertheless remains true that the Dukhabor people feel the need of a leader or a group strong enough to support and direct their lives. They feel lost without a directing hand of authority. Many, not able to make it on their own, independently in the outside world, have found it necessary to return to the group, usually to the hatchet men of the society, the Sons of Freedom. The leader is a dictator, as a despot is usually preferred by the peasant stock. He is an autocratic god who tells them what to do, and who grants them permission for certain privileges, as, e.g., to move to another location. The leaders do not, it is true, have the usual passivity and dependence of the herd instinct peculiar to these people. But they have no real positive leadership ability, having so many native-negative and nihilistic tendencies which qualify them only as experts in arson and dynamiting, or similar violence and degradation. In addition, their leadership is hampered by cut throat competition, which like Mexican generals or South American politicians, they vie with one another for the positions of prestige and privilege.

One other chief characteristic of the Dukhabor is said to be that of inborn hostility. This is outwardly manifested in his peculiar acts of violence, burning, bombing, fighting, shooting and naked demonstrations. Some modern psychiatrists claim that this hostility originates in the parent-child relationship. The Dukhabor child cannot express the great hostility he has for his parents. They control the child with threats of punishment, and repress him with threats of love withheld. The child, as a result, attempts to put up a front of love for his parents, even for everybody, and tries to convince himself that he does not hate anyone. Dukhabor hospitality is then said to be a way to deny, more to themselves, than to others, these hostile feelings. They mean to say, “We don’t hate, we love. That we eat and drink with you proves it.” The deep-seated reason, then, that these people hate the whole world is because they really hate their parents, are too ashamed to admit or show this, and so take out their resentment on others, or on inanimate objects, as, for example, the dynamiting of a bridge.

It is a natural human trait, even in the so called “incorrigibles,” to desire approval and love. Perhaps it is true that a maladjusted man’s hatred of the world is but a manifestation of his longing to be loved. But he himself is helplessly caught in the death-trap of hate. He is prone to hate God and his neighbor; he is hateful and hating his fellow man. For this reason he cannot love naive Joseph (Gen. 37:4, 5), nor any one else. He is a natural born misanthropist, and that because fundamentally he is enmity against God—he hatesGod! The Dukhabor is a picture of the natural man. He knows he is in the clutches of a power beyond himself. But he neither will nor can do anything about it. He admits, “We know we are crazy.,’ He wants love, but is unlovely, is hateful, and consequently is not loved, not by the unsympathetic world about him, nor even by the members of his own flaming hate-society, nor by the despotic leaders who constantly and consistently misguide this cult down the road of rejection, depravation, degradation, ruin and destruction.

Dukhaborism has no theology. It is highly mystical, and therefore has an exclusive individualism. God speaks directly to the soul of man, hence he is answerable to no other authority but the light of his own soul. He has a negative sanctimoniousness according to which he is supposed to practice no smoking, no drinking, no dancing, no meat eating, no owning, no voting, no schooling, and, at times, the indispensable mark of Dukhaborism, no clothing. The ideal includes no possession or cherishing of family life. Parents are addressed as “old man” or “old woman.” Husbands, wife and child, regarded as sisters and brothers, are equally shared with all in the desired communal life, so proving perfect unselfishness and freedom from envy and lust. This does fly in the face of Holy Writ, but that matters not; God speaks immediately to the soul of every man severally as He will, telling them what to do, whether it be to burn property or to strip themselves naked in public. For each one is led by the dictates of the Christ within. Not only “the kingdom of God is within you,” but God himself is within. Hence everyone has infallible direct revelation. No one could be more absolutely right, nor more completely free of mistake than a Dukhabor. Missionaries have done little with the Dukhabors since they assume that human personality has little place in the Christian life, reason is discounted by them, logic is unknown to them and thinking is sinful.

The Bible is ostensibly reverenced, but actually belittled, never read publicly in Dukhabor meetings, interpreted mystically and sometimes destroyed in Bible-burning ceremonies. Creeds are rejected, and theologians are simply unknown. Crass superstition is found among them, such as belief in “luck,” supernatural signs and premonitions, the evil omens of the Black Cat, the Red Rooster and the Bogey Man, as well as the use of magic, incantations, conjuring up catastrophes (e.g., tornadoes), putting curses on people, and seeking of “divine” healing.

The essential trinity is denied. Hence the Son is not co-equal with God, but “Christ” is merely the experience of mystical religious feeling in the heart. The virgin birth is denied, as also the deity and personality of the Holy Spirit. God is not a personal being, nor a distinct being objective to man. Hence Dukhabors do not bow to God in heaven, they bow to the god in each other. Theirs is a worship of man. They do not reverently worship, they merely acknowledge the spark of the divine in the human mind. Prayer is inward. It is not addressed to God as an independent being. In time of need Dukhabors do not ask for strength; they feel strength surging through their being. They feel God’s presence, rather than to invoke it; they neither praise nor thank him. Like the Quakers (who at times come to their aid), they have no minister, no pulpit, no preaching. The doctrine of the Fall of Man is rejected. Nor is the biblical doctrine that Satan instigated the Fall accepted. Adam’s sin was that he clothed his nakedness. Sin is viewed through Pelagian bifocals as weakness which can be overcome, to sinless perfection, by determined dedication. Like Christian Science, evil is regarded as an unreality. Yet it is also believed that since God ordains everything, He also ordains evil, including their forms of it, dynamiting, disrobing and arson, which is all attributed to the sovereignty of the Holy Spirit. Of course, in a Pelagian system there is no need for missionary endeavor. Simply follow the teaching of Jesus and the world will be transformed into the kingdom of God.

The doctrine of substitutionary atonement is scorned on the ground that it destroys Christianity as a moral force in the world, and that it nullifies man’s responsibility for his own acts. In Dukhaborism there is no resurrection, no eternal punishment, no hell or heaven. At death there ensues a period of soul-sleep for six weeks. Then the soul, which had a pre-existence, and is sometimes reincarnated, is free from the bondageof the flesh. But there is no future life. This life alone they live for. Death is the gateway to the Unknown. These “spirit-wrestlers” are busy striving to that end, burning and bombing themselves into their desired attainment of Nirvana, the blowing out of the candle of being. 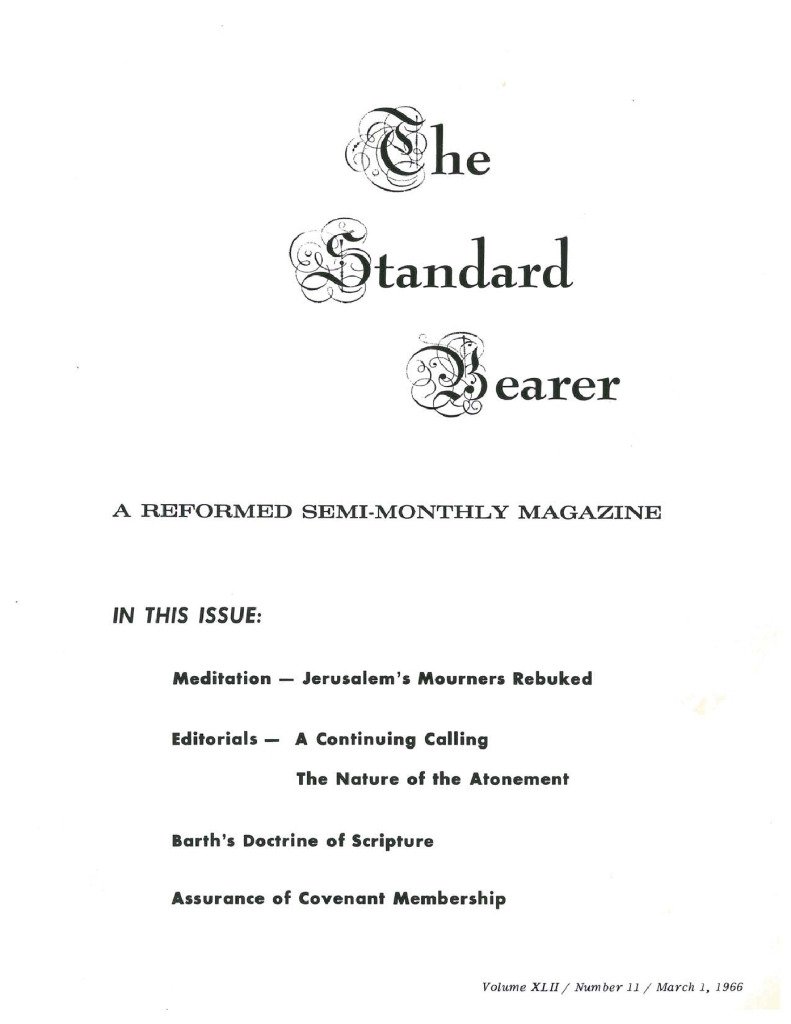