Dordt’s aftermath: Did orthodoxy win the battle but lose the war?

Sometimes an army has won a major battle during a war, but lost the war in the end. The Synod of Dordt marked a decisive victory for Reformed orthodoxy and a blow to Arminianism. But Dordt’s victory appears to have been short-lived. Did Reformed orthodoxy win the battle at Dordt, only to lose the war? In answering that question, this article surveys the history of the Remonstrants and of Arminianism after the Synod of Dordt.

Dordt’s victory was doctrinal: the Synod expressed its condemnation of Arminian theology in the Canons of

Dordt. This victory was also church political: on April 24, 1619 (session 138) the Dutch delegates declared that the Remonstrants whom it had cited were deposed from their church offices.

Changes also took place at the university level. Re­monstrant curators (trustees) and professors were removed and replaced with orthodox men. Notably, Si­mon Episcopius, the Remonstrant leader at Dordt, was succeeded by Festus Hommius, one of the clerks at the great Synod.

Synod could not enforce civil punishments for the Remonstrants; the States General (the national government) had authority to do that. In July, 1619 the States-General permitted those Remonstrants who submitted to their deposition to remain in the country and collect their salary for six months. Most Remonstrant ministers would not submit and were banished from the United Provinces. The government also forbad any de­fense or promotion of Remonstrant doctrine.

The victory was monumental. But the enemy re­grouped.

The Remonstrant resurgence: The war lost?

Recognizing that the Synod was not going to exonerate them, the Remonstrants plotted strategy. On March 5, 1619 several of them met at Rotterdam to express their grievances against Dordt, their rejection of whatever Dordt might say (Dordt had not yet drawn up the Canons), and their willingness to establish their own churches if they were put out of the Reformed (state) church. A few weeks later, on March 31 (Easter Sunday) the Remonstrants in Dordt met in a separate worship service, an event that some consider the official beginning of the Remonstrant Church in the Netherlands.

When the Remonstrants were formally expelled in July of that year, some went into hiding in the Netherlands. Others left the provinces for Antwerp (in Bel­gium) or Waalwijk (in North Brabant, which was not part of the Dutch Provinces until 1648). At a conference in Antwerp during the Fall of 1619, the Remonstrants decided to prepare a response to the Synod of Dordt, to train students for the ministry according to their own convictions, and to fund and promote the underground Remonstrants in the Netherlands.

Their efforts bore fruit. By 1630, Remonstrant churches were worshiping openly in Amsterdam and Rotterdam, and Leiden University could admit Re­monstrant students. In 1634 a Remonstrant seminary opened in Amsterdam, with Simon Episcopius as profes­sor. All of this happened within fifteen years of Dordt. So soon Dordt’s victory appeared to be lost! What ex­plains this sudden turn of events?

In 1617, politics had explained the sudden turn of events in favor of the Contra-Remonstrants. Prince Maurice had come to power and had opposed the Remonstrants. Politics also explains why the pendulum later swung in the Remonstrants’ favor. After Maurice died in 1625, his brother Frederick Henry became the stadtholder (the highest official of the United Provinces). Frederick showed more leniency to the Remonstrants. Perhaps another explanation was that, in time, the chil­dren lost interest in the war that their fathers had fought so valiantly.

The Remonstrants also spread to other European nations. By the late 1600s the churches and orthodox theologians in Berne and Geneva, Switzerland, were combating Arminianism as a present threat. Likewise, it had made inroads into England, Scotland, and Ire­land by the turn of the century. Doctrinal errors such as Amyrauldism in France and the Marrow controversy in England were developments of specific aspects of Arminianism. Amyrauldism attacked Dordt’s doctrine of predestination. The Marrow men taught that the gospel was to be freely offered to everyone because Christ is dead for all.

About this time, another strand of Arminianism was developing in England and in colonial America—that promoted by John Wesley and others. The Wesleys taught what Arminianism had always promoted: that God loves each and every person, but requires one to choose for Him. However, the Wesleyan strand of Arminianism was different from the Remonstrant strand in two ways. Doctrinally, the Wesleys did not develop their idea into an entire system of teaching, as the Re­monstrants in the Netherlands had done. And the Wesleys were originally Anglicans; they had no allegiance to the Canons of Dordt. Nevertheless, they popularized the essence of Arminianism, ensuring that it would be tightly woven into American religious thought.

Today, much—virtually all—of American Evangelical­ism is affected by Arminian theology. Some Dutch Reformed denominations that count the Synod of Dordt as part of their historical heritage no longer defend Dordt’s doctrine in every respect. The doctrine of the well-meant offer, which compromises Dordt’s stand on total depravity and irresistible grace, plagues many Reformed churches. The idea of common grace that Abraham Kuyper promoted in Dutch Reformed circles, and its further development by the Christian Reformed Church in 1924, undermined the doctrines of total depravity, irresistible grace, and particular atonement. Teach that Christ died only for some humans, not each and every one, and many members of Reformed denominations will believe that you are mistaken. Ask them to explain God’s decree of election, and be saddened but not surprised when many say that it is God’s will to save all who will believe and obey in their own power, not His determination to save certain specific persons whom He ordained to eternal life.

If the battle appears to be lost on those battlefields, what of the closest battlefield? By God’s grace, the Prot­estant Reformed Churches in America and her three sis­ter churches not only hold the Canons of Dordt as an official confession, but also teach and defend the doc­trines taught in it.1 But does each and every member understand those doctrines, and see their importance? Would each and every member readily defend and pro­mote them?

And how goes the battle in our own lives? We con­fess that God, from eternity, ordained some to eternal life in Christ; but in our hearts do we question His justice in sovereignly reprobating others—especially if those others are our close friends or family members? We confess that the human race is totally depraved, and find abundant evidence of this in current events around us. But do we deny or excuse our own sins—a practical denial of total depravity? We praise God for His irre­sistible grace—but are we quick to boast of some work of our own?

Our sure hope: Certain victory

In history, the cause of orthodoxy seems to have suffered defeat after defeat. But truth will be victorious. Orthodoxy will at last prevail. This will become evident when our ascended Lord brings His glorified church to heaven. No, the church in heaven will not subscribe to the Canons of Dordt; it is an earthly document, and with all other earthly documents will be destroyed with fire. However, the church in heaven will confess and praise the sovereign grace of Jehovah in salvation; we will confess then the same central truths that are expressed in the Canons. The glorified church will sing a new song of praise to Jehovah for His irresistible grace shown to sinners, based solely on the shed blood of the Lamb and its saving effect (Rev. 5:9-10, 14:3). Those singing this song will realize that they, though sinners, have been appointed to everlasting life, and preserved with a view to it.

Even in time, the war will be won. No, Arminianism will not be vanquished before our Lord returns. Arminianism manifests the pride of the human heart that conceives of a God whose justice accords with a human, fallen sense of justice. This error will remain, in whatever form. The church must always know that this threat is ever present and constantly fight it, without letting down her guard. This error’s continued presence leads us always to rely on the grace and mercies of Jesus Christ, and gives occasion for many prayers for defense and safety from our enemies.

Yet, there is a sense in which the battle that Dordt won is won again and again. It is won in the hearts of faithful believers who love the truth. It is won every time an unbeliever is brought to true, saving faith, and every time an ungodly person is turned to godliness. It is won by faithful churches who refute and oppose Arminianism and preach sovereign grace. It will be won as the faithful church preaches the gospel, for (as the Canons remind us) this gospel must be preached indis­criminately throughout the world. The preaching of this gospel is the running of the white horse of Revela­tion 6:2, and the cause of the gospel will be victorious.

Until Christ returns to defeat the enemy decisively and deliver the church from such error, may the prayer with which the Canons conclude be on our lips:

May Jesus Christ, the Son of God, who, seated at the Father’s right hand, gives gifts to men, sanctify us in the truth, bring to the truth those who err, shut the mouths of the calumniators of sound doctrine, and endue the faithful minister of His Word with the spirit of wisdom and discretion, that all their discourses may tend to the glory of God and the edification of those who hear them. Amen.

1  The PRC and her sister churches are not the only churches that strive faithfully to maintain the doctrines of sovereign grace. However, I mention these specifically because 1) they are the “closest battlefield” for most readers of the Standard Bearer, and 2) they officially hold the Canons of Dordt as their confession.

Note: Due to space limitations, the bibliography for this article could not be included. If you desire a copy, please contact Prof. D. Kuiper. 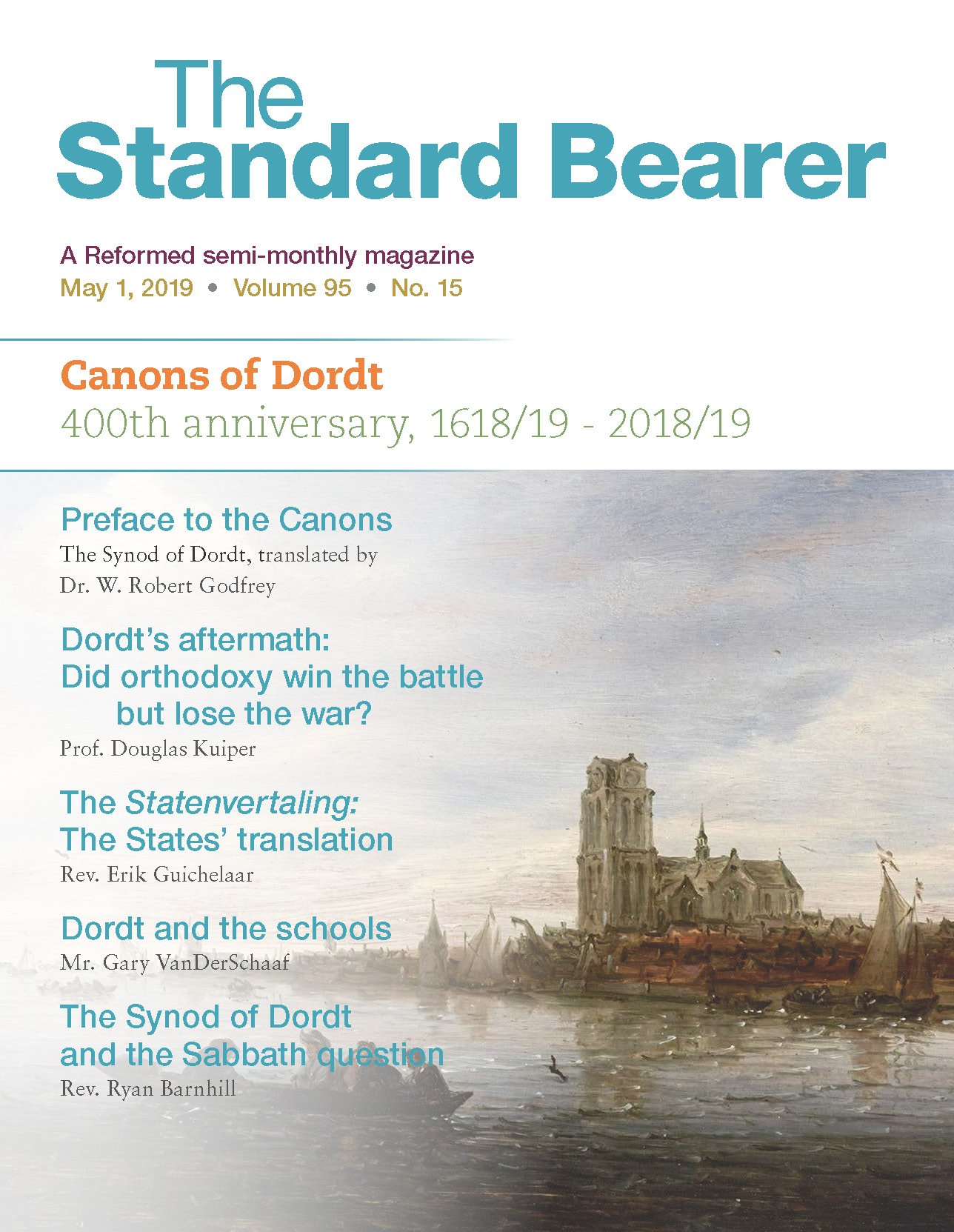