(Note: This is the second installment of brother Postma’s article on this subject. The first installment appeared in our previous issue. HCH)

II. Dooyeweerd’s View of the Bible

It really concerns me that Runner does not make any reference to Dooyeweerd’s view of the Bible. Must we assume, then, that Runner shares Dooyeweerd’s view? We do get that impression by reading his article. In fact, it seems rather obvious that Runner backs up Dooyeweerd all the way, giving him and his brother-in-law all the credit for changing “the whole course of my life.”

Furthermore, he defends Dooyeweerd by saying: “Dooyeweerd’s preference in his later years for the term ‘ecumenical Christian’ instead of ‘Calvinistic’ to designate his philosophical work was in no wise(italics added) a departure from his Reformed heritage, as has been charged.”

Question no. 1: Was Calvin perhaps too Biblical in his approach to all of life, so that Dooyeweerd did not want to use the designation “Calvinistic” for his philosophical work?

Question no. 2: What really does the expression “ecumenical Christian” mean? Does it mean to suggest that we must discard the Reformed Creeds as Dooyeweerd suggested in 1961, during his meeting with the A.R.S.S. board in Canada? Does Dooyeweerd mean to suggest that philosophy is so much more able to unite Christians all over the world than the Reformed Confessions would be able to?

We must leave it up to God, Who knows the innermost thoughts of each and every man and Who tries the hearts, to judge whether or not Dooyeweerd was a child of God. But that he erred with respect to the Bible is without any doubt.

Although Runner often makes mention of the Word of God in his appreciation for Dooyeweerd and even speaks of a Biblical foundation in regard to the principles Dooyeweerd stood for, we do well in this time and age of boundless confusion to ask: what is meant by the Word of God? About a year ago I heard a Christian Reformed minister—there were other witnesses present—make the remark in regard to what I termed an unbiblical phenomenon in our churches and school as follows: “Well, that’s your Biblical interpretation, but I have mine; the Baptist has his, the Roman Catholic has again another interpretation, and the Presbyterian has his; so, who are you going to believe?” I was amazed and stunned and let him know in no uncertain terms that I do not expect such kind of confused reasoning from a minister of the Word, and certainly not in the Christian Reformed church.

If the Bible is treated that way, then each one may interpret it according to his own fancies, philosophical or not, we’d better realize that we have removed ourselves a long way from what our Reformed forefathers stood for.

The Bible allows only one interpretation, and that is the interpretation according to the sense and the meaning of the Holy Spirit. If this would not be true, then the Bible has ceased to be our only absolute and infallible rule of faith and life. To make the Bible subject to all kinds of human opinions, however philosophically clever, renders our only rule for faith and life arbitrary and frivolous.

Our Reformed forefathers believed in Unlimited Inerrancy, so that they knew what it meant to stand in awesome wonder before the absolute, unlimited sovereignty of God.

To take, and for the church of God to allow for the position of Limited Inerrancy, leads to absurdities not only on the pulpit, but school, family life, and all of society is adversely affected by such a stand; since limited authority with respect to God, Who is the Absolute Sovereign over all things, degenerates to anarchy.

Besides, when it is taught and believed that the Bible contains fallible human words, who then, I pray, is to say which portion of the Bible is fallible?

That such a concept of the Word of God, the Bible, carries much further than one might ever suspect, and influences the hearts and minds of even God’s people much more strongly than one might wish superficially, is clearly demonstrated by Dooyeweerd’s pupils and the facts with which we are confronted every day. Dooyeweerd’s pupils, better known probably as the leaders of the A.A.C.S. movement, have indeed carried this principle of “Limited Inerrancy” farther than Dooyeweerd would have perhaps ever presumed. We have now come to the third part of our criticism.

III. How the Bible Is Viewed By Some of Dooyeweerd’s Pupils

In the Netherlands there is a saying which goes something like this, “Zoals de ouden zongen, piepen de jongen,” or freely translated, “As the older ones sang, so the young squeek.” Now, obviously, there is quite a difference between singing and squeeking. But what can be expected of the young ones when the older ones produce an unclear sound? This becomes very apparent when one reads the various pamphlets, brochures, and books, or attends some of their so-called “discovery” series meetings, where a number of A.A.C.S. leaders have expressed their views about the Bible. A few illustrations might be sufficient to show that the A.A.C.S. movement is not as Christian (in the Biblical sense) that is, as it might sound on the surface.

Dr. Paul Schrotenboer, secretary of the RES, had this to say when he wrote in the International Reformed Bulletin in the January-April issue, 1968: “Scripture isonly (italics added) one form of the Word of God.” One wonders how many other forms he had in mind! And this: “Scripture is only (again that limiting word ‘only,’ B.P.) so many human words, unless we see that it is the only means there is to connect us with the revelation of God in Christ.” By the way, John Calvin says that it is the Holy Spirit which connects us to Christ through the Word (the Bible). We are further informed that “the Bible in isolation is not the Word of God. Scripture is only a form of revelation and if we do not recognize that it is only a form (italics added), we shall exalt the Bible above its due and do despite to Christ.” This might sound rather pious, but in reality it is nothing but philosophical hullabaloo! Fact is that we, as sinful as we are by nature, are never able to exalt the Bible too much. In fact, the more we respect and exalt the Bible as the living Word of our God, the more we exalt God, Whose Holy Name is to be exalted above all else. We wish that the Bible would be more exalted than it is today. No further comment should be necessary.

Perhaps we might be looking forward by and by to a new Hart Bible, just as we have been “entertained” not too long ago on the campus of Dordt College by Dr. C. Seerveld in a talk (announced in the church bulletin!), “How to read the Bible aesthetically,” when he read his own peculiar version of the Bible, calling it God’s Word! Well, a few more or less flimsy versions of the Bible won’t make any difference. Let’s add to the confusion!

The same writer, Dr. Hart, informs us that “the Word of God is not a textbook. . .because it is not a book at all!” Furthermore, he says: “The Bible is, thank God, not the pure revelation of God’s Word, because then we could not see it.” Anyone who wants to swallow this philosophical hodge-podge should read and study Article 4 of the Belgic Confession before attempting to do so.

Another one of the A.A.C.S. leaders, Dr. Arnold DeGraaf, states emphatically that the Bible is not a textbook for any science, not even theology (italics added). “And therefore,” so he writes in The Educational Ministry of the Church, pp. 156-158, ” Dr. Abraham Kuyper’s effort to derive his theology solely from the Scriptures was a mistake, since the Bible does not contain scientific theological concepts.” He adds: “A person wanting to derive his theology from the Scriptures alone will invariably be misled.” (italics added) What an audacity against God Almighty and His Holy Spirit! “The meaning of Scripture,” so DeGraaf informs us further, “cannot be grasped without considering the creational ordinances.” He says he found the ground plan for these ordinances, these “law spheres,” in the philosophy of Law of Dooyeweerd. DeGraaf informs us that “as a systematic discipline, theology cannot do without such a theoretical account of the order of creation.” Poor Augustine, poor Calvin, poor DeCock, and others, who all had to do it without such a theory! In Understanding the Scriptures, the same DeGraaf tells us that the Bible does not teach us specifically the origin of man and beast, because it does not contain propositional truths about God, about Who and what He is, and about man!

Many more examples could be cited, but we would like to suggest the reader avail himself of the bookletSome Questions and Answers About the AACS, by Rev. Peter DeJong, of Dutton Christian Reformed Church. It is made available by the Reformed Fellowship, Inc., Box 7383, Grand Rapids, Michigan 49501.

There is indeed a lot of talk about the Word of God among the adherents of the AACS movement, and consequently it sounds so pious. But if the Bible is only one form of the Word of God, to mention only one aspect of this whole matter, how many other forms of the Word of God are there? And who is going to explain, to exhort, and to exegete the other various “forms” of the Word?

In summary let me point out the following:

1. There is very little mention of the true and horrible character of sin, which has deadly infected all of life in all its relationships.

2. There is a wrong emphasis on the redeeming and saving work of God through Jesus Christ. There is an unbiblical stress upon the salvation of the world through so-called Christian organizations, rather than stressing the calling of the individual child of God.

3. There is very little mention of the need for regeneration; but without this regeneration by the gracious operation of God’s Holy Spirit in the hearts of His children, there is no possibility at all of even spiritually seeing the kingdom of God.

4. There is a high-minded arrogancy (spiritual high-mindedness!) in the AACS camp, shown by a belief that there has never been a truly Christian philosophy until Dooyeweerd and Vollenhoven developed it! Dooyeweerdians admit that their doctrine cannot be traced farther back than Dooyeweerd or Kuyper. They arrogantly believe that everyone before Dooyeweerd was wrong, but everyone after him will be right in as far as he agrees with Dooyeweerd. The same spirit comes to expression in Runner’s article.

5. Thus, Dooyeweerdianism, as carried out by the leaders of the AACS, is a new system of thought, new doctrine, if you will.

6. Our Reformed forefathers embraced this principle, that if the doctrine is true, it is not new! If it is new, it is not true. We do well to take these words to heart, so we may watch and try the spirits, whether they are of God. 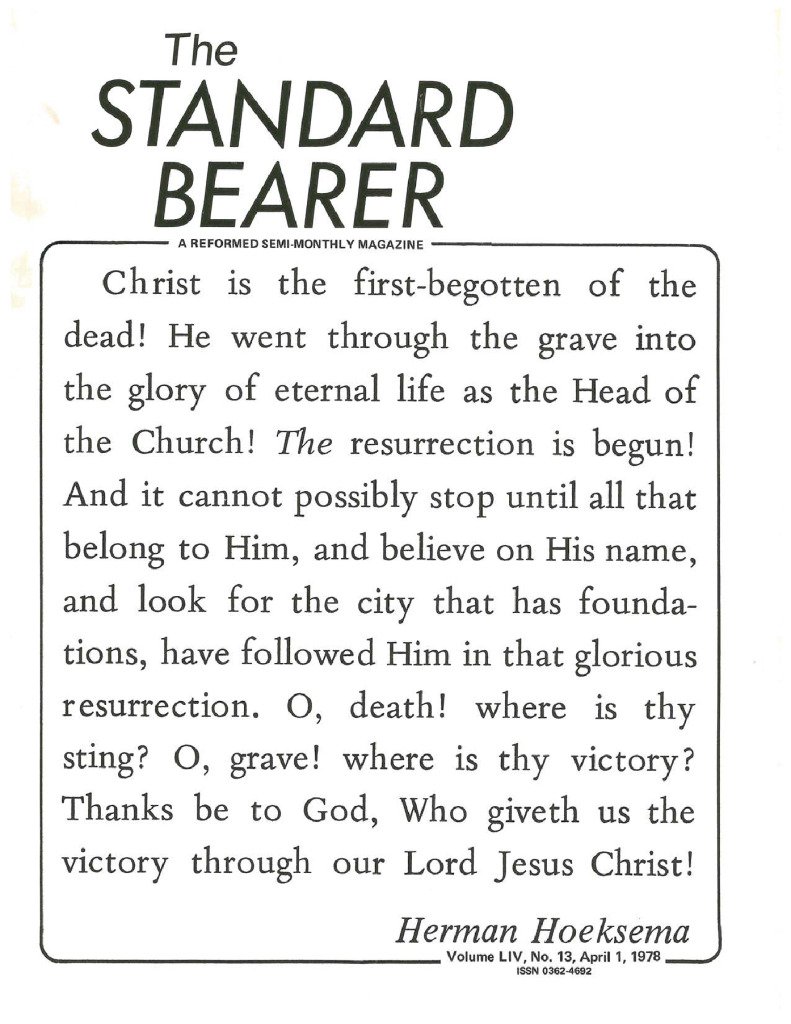