A door as the means of entering and exiting a building is mentioned several times in Scripture with great significance. The door which Noah built in the ark was shut by the Lord (Gen. 7:16), denoting the perfect safety of Noah’s family. At the time of the first Passover in Egypt, the Israelites put lamb’s blood on the doorposts of their houses (Ex. 12:7) so that the plague of death did not enter their houses. The Israelites were commanded to bring their peace offerings to the door of the tabernacle where the priest would sprinkle the blood of the sacrifice on the altar at the door of the tabernacle (Lev. 17:4-6). The women on the resurrection morning found the great stone at Jesus’ sepulcher rolled back (Matt. 28:2), not that Jesus could exit the tomb, but that they might witness His resurrection.

Far more often, however, Scripture speaks of a door in the figurative sense. Explaining the parable of the sheepfold, Jesus says, “I am the door of the sheep” (John 10:7, 9). If any man enter in by Him, he shall be saved and find pasture. The sheepfold is the church, and pasture refers to all the benefits of salvation, especially the righteousness that is alone in the Good Shepherd, who giveth His life for the sheep (John 10:11). It is in this connection that we are to understand the “door of faith” that God has opened to the Gentiles (Acts 17:24). The door of faith gives access to Christ, and really this is a two-way door, for by it we pass into union with Christ, and all the benefits of Christ pass unto us. In this way the “other sheep” of Christ are brought in, and there is one fold and one Shepherd (John 10:16).

God gave an open door of utterance to the apostles to speak the mystery of Christ (Col. 4:3), as He still gives to the church today. This is a great door and effectual, even though there are many adversaries (I Cor. 16:9). Paul received an open door to preach Christ’s gospel in Troas, and was confident that he was a sweet savor unto God in them that are saved and in them that perish (II Cor. 2:12, 15). That God’s opening of doors of opportunity to preach the gospel is effectual, that is, powerful according to His purpose, is shown by the three “door-miracles” of Acts 5, 12, 16. The course of the gospel cannot be hindered by prison or bonds, by anything human or demonic. Christ promises to use churches which are faithful in doctrine and in walk to spread the gospel, for He promised the church at Philadelphia an open door that no man can shut, after commending them for keeping His word (Rev. 3:8).

Doors can also be shut. Christ has the key of David and is the One who “openeth and no man shutteth; and shutteth, and no man openeth” (Rev. 3:7). The door to the marriage feast was shut forever to the unprepared, foolish virgins (Matt. 25:10). Although a door is not mentioned in Jesus’ great discourse on the keys of the kingdom of heaven (Matt. 16:19), the idea is very prominent. The binding and loosing on earth by the church in her disciplinary work that has validity before God in heaven is really the opening and closing of the doors of heaven. Christ has the authority to open and to close, to call into and to cast out, to give grace and to condemn.

The word door is also used in the eschatological sense. When the child of God sees the signs of the end of the world being fulfilled, he may know that the end is near, “even at the doors” (Matt. 24:33). We must be patient unto the coming of the Lord, suffering wrongfully, never holding a grudge against another, knowing that “the judge standeth before the door” (James 5:9). That which is just outside the door is near at hand; He that is at the door is ready to judge all things righteously, destroy His and our enemies, and take us to heaven.

Perhaps the most difficult door-passage is Revelation 3:20, where Christ says to the faithful in the lukewarm church at Laodicea, “Behold, I stand at the door, and knock; if any man hear my voice, and open the door, I will come in to him, and will sup with him, and he with me.” The Arminian notion that Christ knocks at the door of men’s hearts, waiting for them to open to Him and be saved, is foreign to Scripture and to this passage. As with Lydia in Macedonia, the Lord alone can open hard, depraved hearts (Acts 16:14). To say that the door is the door of the church at Laodicea is a bit forced, for Christ is speaking to individuals and promises to come in to him. Keeping in mind that the Lord is speaking to those whom He loves and has been chastening in that proud church, it is better to understand the door as referring to the conscience. If any man hears His voice and repents, he will experience in his conscience union with the Lord and covenant fellowship with Him. This may be in the way of overcoming the difficulties in the congregation, or in the way of coming out and establishing the church anew. To those who hear the Lord’s voice and earnestly contend for the faith, the Lord grants to sit with Him in His throne. For this is the way Christ Himself overcame and is set with His Father in His throne. 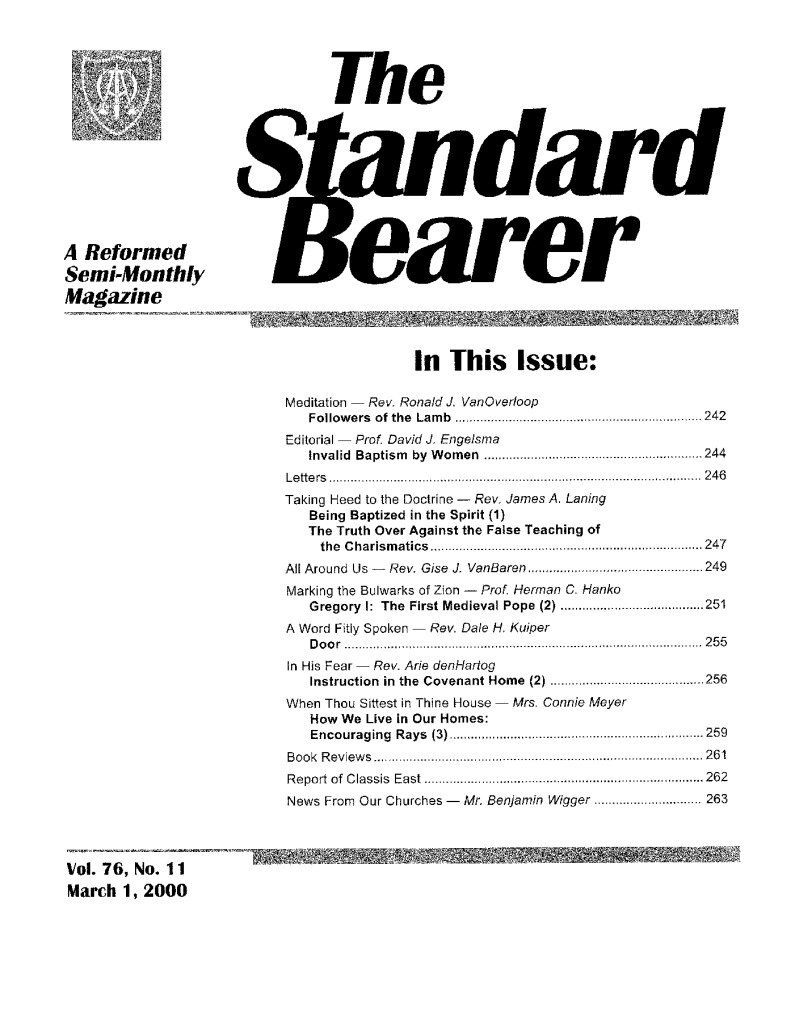