Mr. Doezema is secretary of the Domestic Mission Committee.

“In response to the question: ‘Is one missionary for all of Great Britain realistic?’ the answer is clearly, ‘No,’ but we can hardly expect the PRC to sanction more than one man!”

The British Reformed Fellowship (which offered the above assessment of needs in the UK) was established in 1990 by a group of Christians “concerned for the defence and propagation of the historic Reformed Faith in the British Isles.” One of their stated objectives is “to organize meetings, conferences, preaching services and other activities in order to further the Reformed Faith and to give practical expression to the unity enjoyed by Christians of Reformed persuasion.” Familiar to our readers, surely, are the bi-annual “family conferences” sponsored by the British Reformed Fellowship, the third of which will be held this summer in Sussex, England, and which will again feature Profs. Engelsma and Hanko as conference speakers. The BRF’s reason for existence can be found in the fact that, though there are few existing Reformed churches in the British Isles, there “are many true children of God who embrace the Reformed faith but live in spiritual isolation deprived of Reformed ministry and fellowship.” It was that reality which prompted the BRF, a year ago already, to write to the Mission Committee that, while they “appreciate the work being performed by Rev. Ron Hanko in N. Ireland, such is the nature of the need on the mainland that nothing less than someone permanently stationed in England will really address the problem. Moreover,” they continued, “Rev. Hanko is himself already highly stretched and is able to make no more than a couple of trips to the mainland each year.”

“Highly stretched” is no exaggeration. In a single monthly report to the Mission Committee and calling church, Rev. Hanko can write about four lectures, two special Bible classes, and two “open-air” services — some of which activities brought our missionary “to the mainland”: Morley, S. Yorkshire; and Wrexham, N. Wales. All of that … in addition to the preaching, twice every Sunday. And that’s just the speaking. There’s also the writing. In that same monthly report, Rev. Hanko makes passing reference to no fewer than six articles written for the News-sheet of the Covenant Reformed Fellowship (CRF), one ad for Evangelical Times, and an article for the Ballymena Guardian. A fruit of the advertising of the CRF, by the way, is the distribution of vast amounts of literature. On one single day, Rev. Hanko mailed out 1,200 pamphlets and 800 copies of the News-sheet, and gave orders for 10 books to the CRF bookstore manager. Most of the requests come from people in the British Isles, of course, but the CRF has filled orders from Malawi, Kenya, and the Philippines as well. “Our presence in the UK,” writes Rev. Hanko, “continues to have an impact much beyond Ballymena and even Northern Ireland.”

Hardly is it the case that Rev. Hanko does all the work of the CRF. Typical of reports we have received, oral and written, regarding the CRF is one received last summer from then-Candidate Doug Kuiper, who had spent five weeks in Northern Ireland during Rev. Hanko’s furlough: “The people of the CRF are a well-read, mature, and solidly Reformed people…. They are, furthermore, a very energetic group in promoting their faith…. By this I mean that they are active in evangelism, both with regularly scheduled mid-week meetings, and with open-air meetings in other parts of Northern Ireland. The Lord has blessed the CRF both with a sizable group and with men who are well qualified to serve in the special offices. This made it a joy to work in their midst.”

Not surprisingly, the Covenant Reformed Fellowship believes that the time has come for them to organize as a congregation. Three years they have labored hard under the guidance of Rev. Ron Hanko, and have seen their membership grow to eight solid families (not including that of Rev. Hanko), seven individuals, and a number of regular visitors showing varying degrees of interest in the cause of this Reformed work. The recommendation of the calling church and of the Mission Committee is that Synod approve the CRF’s request for organization. The date for organization has been tentatively set for July 24, just prior to the BRF Family Conference this summer.

In anticipation of that long-awaited event the CRF has made several important decisions. Late last fall they reconsidered an earlier decision to organize on the basis of both the Three Forms of Unity and the Westminster Standards, and decided instead to organize on the basis of the Three Forms of Unity only. Further, after giving serious consideration to adopting a Constitution based on the Church Order of Dordt, they decided instead to adopt the Church Order of Dordt itself, with just two exceptions, viz., the eliding of Article 67 (worship services on special days) and the modifying of Article 69 to limit the singing in worship services to the 150 Psalms — both exceptions reflecting, by their own testimony, a difference not of principle but of practice.

In addition to the matter of the organization itself, there are two related questions which must be faced by Synod 1996. The first is the relationship between the newly organized congregation and the PRC in America. The intention of the CRF is that the new church be the beginning, D.V., of an indigenous denomination. And the preference of the CRF is that a temporary relationship be established with the PRC which would provide them opportunity to seek advice from Hudsonville PRC as a kind of “neighboring consistory.” They desire too that they and the PRC may “continue to work together more or less on the same basis as at present in the cause of missions here in the United Kingdom and Ireland.” The carefully formulated grounds for this preference are these: “1) This [relationship with the PRC] would avoid in great measure the dangers of independentism while at the same time avoiding the difficulties of the [new church] being part of the PRC. 2) In matters of discipline particularly, this would allow the [new congregation] to function in accord with the principles of Reformed church order and of Scripture. 3) This would avoid the difficult and even undesirable situation of the [new congregation] immediately passing from complete dependence upon the PRC to complete independence.”

Regrettably, there was insufficient time, before the deadline for material for Synod, to give the proposal of the CRF the careful study which it requires. Hudsonville therefore, with the concurrence of the Mission Committee, will advise Synod to postpone action on this longer term relationship until Synod 1997, meanwhile allowing for the CRF, between the time of their organization and Synod 1997, to seek advice if necessary from the Hudsonville Council or from two or three neighboring Protestant Reformed Churches.

The second question which must be faced by Synod 1996 is the status of Rev. Hanko after organization of the CRF. The CRF, after considering various options, offered their preference that Rev. Hanko remain as missionary pastor of the PRC in Northern Ireland. The calling church and the Mission Committee are of a mind to recommend that arrangement to Synod. It seems to us that the precedent of Singapore is applicable here. In both instances — a compelling need for continued pastoral leadership and continuity in the work. And in both instances — a great, continued need for mission work. Hudsonville, in fact, in its grounds to Synod, makes reference to the “hundreds of good contacts” which Rev. Hanko has “throughout the UK.” Hudsonville adds that “the efforts begun in Portadown (NI) and Wrexham (Wales), as well as others, ought to be nurtured. The BRF even requests of the Mission Committee to consider sending another missionary to the UK.”

Ah, yes, to send another missionary to the UK. How we would like to do that!

Immediately, however, questions arise. What about calls for help in our own country? Earlier this year Rev. Thomas Miersma spent several weeks in the Cincinnati, OH/Florence, KY and Pittsburgh, PA areas, the former being a follow-up on the evangelism efforts of our South Holland congregation. It’s becoming increasingly clear to Rev. Miersma and to the Mission Committee how difficult it is to do any kind of justice to calls for help in the east — to say nothing of possibilities for labor in Canada — while the home missionary is laboring in Alamosa, CO. Besides, the Domestic Mission Committee must labor in the context of commitments of our denomination on other fronts. The commitment, for example, to call another professor in 1996. The commitment to consider seriously a recommendation by the Foreign Mission Committee to call a missionary or missionaries to Ghana. Manpower, therefore, is already a legitimate concern. But add to that the expressed interest of the FMC in investigating possibilities for labor in the Philippines … and the work of the Contact Committee, especially in Singapore … and the expense involved in radio broadcasting (Denver, Houston, Long Island). Financial resources also obviously become a matter of concern.

By these the mission labors of a federation of churches are necessarily limited. These are factors that must be, and will be, part of the deliberation of the Mission Committee when decisions are finally made with respect to what we already recognize as legitimate, urgent appeals for help — from sources in the British Isles, in the eastern U.S., and more.

The Protestant Reformed Churches cannot, and are not called to, preach the gospel in every nation of the world. But they are called to use their resources willingly, enthusiastically, sacrificially in the work of missions whenever and wherever the Spirit leads and gives opportunity — “to the measure of our God-given ability,” as the constitution of the Mission Committee has it. That same constitution assigns to the Mission Committee the duty “to find possible fields and recommend them to the churches.” The Mission Committees (foreign and domestic) of the Protestant Reformed Churches do not take that responsibility lightly. May God grant us wisdom to decide among the opportunities which are presenting themselves in growing numbers. May God grant Synod the wisdom to evaluate correctly the recommendations it faces regarding missions, in the light of the utilization of denominational resources overall. And may we have such a heart for missions, and for all of the work of the church, that we will view even a sizable increase in a synodical budget as evidence of God’s favor.

We had intended to give in this article a broader overview of the work of the Mission Committee. But, after focusing first on the work in Northern Ireland, we find we have already used up our space allotment. We wish however to add just three things. First, a public expression of the Mission Committee’s great appreciation for the labors of Rev. Hanko and Rev. Miersma; for the careful oversight of the calling churches; and for the leadership provided by Rev. Gritters and Rev. VanBaren in Hudsonville and Loveland respectively. Second, an acknowledgment of the generosity of the members of the San Luis Valley Mission. Their provision of funds for a down-payment on a house in the San Luis Valley has made it possible, at the time of this writing, for our churches to secure much better housing for our home-missionary, at a cost which is well within our budget for renting. This kind of commitment to the cause is most gratifying. For this and every other instance of the cooperation we enjoy on every front the Mission Committee humbly thanks the Lord, who has been pleased, for His own good purpose, to prosper our efforts. Third, we covet your continued prayers for us, to God, on whom we are totally dependent for every labor. 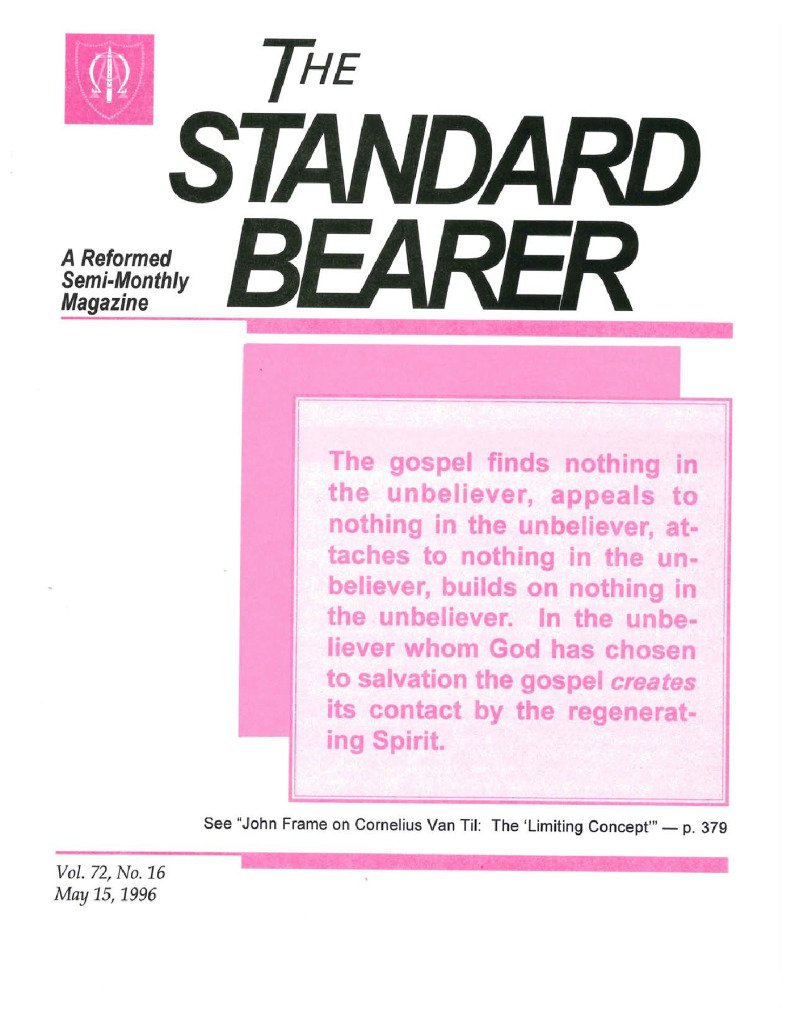