Does The Tail Wag The Dog?

Does The Tail Wag The Dog?

I mean this, of course, figuratively. The “dog” in this case is the Canons of Dordrecht, and the “tail” is the Conclusion of the Canons.

And thereby hangs a tale.

Briefly, the tale is this. From 1934 to 1959 the Christian Reformed Psalter Hymnal omitted the Conclusion of the Canons. Apparently it took Dr. Daane a good many years to wake up to this fact; and when he did wake up, he failed to do the kind of elementary research that a good doctor of theology ought to do. Instead, he broke out into print in the “Voices” column of the Banner (September 1) on the presumption that this omission was “unauthorized” and that someone dared to “tamper thus with this Confession of our church.” “After all,” he writes, “this alteration of the Canons was not the result of official Synodical decision.”

The Rev. John Vander Ploeg sets the record straight in the Banner of October 27, quoting a synodical decision to drop the Conclusion from the Psalter Hymnal.

Dr. Daane was evidently given opportunity to reply to Rev. Vander Ploeg in the same “Voices” column. He briefly acknowledges the information furnished by Rev. Vander Ploeg, admits that he was wrong in writing that this omission was unauthorized, and then proceeds not only to criticize the synodical decision, but also launches forth on a commentary about the Conclusion to the Canons and its significance which can best be summed up by the figure of the tail wagging the dog.

And to make matters worse, Daane perverts and presents a caricature of the Conclusion. He must do this in order to present the Conclusion (the tail) as being of such a nature and significance that it wags the dog (the body of the Canons).

And to make matters still worse, Daane’s purpose is to present the Canons (in the light of his own perverted version of the Conclusion) as teaching something which is the very opposite of what they do indeed teach. It is in this sense that he makes the tail wag the dog. This is the same sleight of hand which Dr. Berkouwer tried in his study on Divine Election. By this crafty trick many have been deceived. I refer to Berkouwer’s and Daane’s misuse of the “non eodem modo” (“not in the same manner”) expression which is found in this Conclusion.

And I want to sound the same warning to Daane which the Synod sounded to the slanderers of the Reformed confessions and the Reformed churches. For by his misrepresentation of the Conclusion Dr. Daane in effect makes himself guilty of the very heinous sin against which the Conclusion warns. Here is the language of the Synod: “Moreover, the synod warns calumniators themselves, to consider the terrible judgment of God which awaits them, for bearing false witness against the confessions of so many Churches, for distressing the consciences of the weak; and for laboring to render suspected the society of the truly faithful.”

Now what kind of tail does Dr. Daane make out this Conclusion to be?

First of all, he misrepresents the place and purpose of the Conclusion, as follows:

The first ground is the only actual ground. And it is weak. (How often many reasons are given when one good one cannot be found!) The Conclusion was eliminated by the 1934 Synod because it is a “historical apology” and hence is not a part of the Canons as such.” On the same basis one could argue that the Canon’s Rejection of Errors is not part of the Canons as such and should also be eliminated. Moreover, the so-called “historical apology” is far more a theological apology, for, like the Rejection of Errors, it explicitly rejects specific theological positions, thereby clearly indicating how the Synod of Dordt did not want its Canons to be interpretated. In its Conclusions the Synod of Dordt gives us a window through which we may see its mind and intent; it throws light on its teachings in the Canons by asserting that the Synod rejects such and such misinterpretations of the Canons.

Now what is wrong here?

Let me point out the following:

2) Daane is utterly mistaken when he exalts this Conclusion virtually to the status of the Canons’ Rejection of Errors, and suggests that one could just as well omit the Rejection of Errors as the Conclusion. The simple fact is that in the body of the Canons, both the positive part and the Rejection of Errors, the fathers engaged in all the theological apologetics that was necessary. And now, on the basis of all that they have set forth in the body of the Canons, they dray certain conclusions chiefly with respect to the false charges (calumnies) which historically the Arminian enemies had brought against the Reformed churches and the Reformed faith long before the Canons were composed.

3) Daane misrepresents the Conclusion when he states that it is virtually another Rejection of Errors which “explicitly rejects specific theological positions, thereby clearly indicating how the Synod of Dordt did not want its Canons to be interpretated” (sic!). He ought to know the fathers better than that! Our fathers were not wont to call a “Rejection of Errors” a “Conclusion.” Nor were they such theological nincompoops as to finish four specific rejections of errors and then turn right around and add another one. The fact of the matter is that in the opening statement of the Conclusion the fathers call their Canons “the perspicuous, simple, and ingenuous declaration of the orthodox doctrine respecting the five articles which have been controverted in the Belgic churches; and the rejection of the errors with which they have for some time been troubled.” Obviously, the fathers did not feel the need of any more doctrinal explanations and defense of the truth. They were finished with that; and they considered their work perspicuous and simple! They were perfectly willing to let the Canons speak for themselves, and did not have to say “how the Synod of Dordt did not want its Canons to be interpreted.”

4) Daane completely perverts the relationship between the Canons and the Conclusion when he states that “In its Conclusions the Synod of Dordt gives us a window through which we may see its mind and intent; it throws light on its teachings in the Canons by asserting that the Synod rejects such and such misinterpretations of the Canons.” The very opposite is true. Not the Conclusion is a window opening on the Canons; but the Canons furnish a window through which to view the slanderous charges and the makers of those slanderous charges against the Reformed doctrine. Again, a simple reading of the first paragraph of the conclusion will show that I have the language of the Conclusion plainly on my side in this statement. Pay attention carefully to this:

And this is the perspicuous, simple, and ingenuous declaration of the orthodox doctrine respecting the five articles which have been controverted in the Belgic churches; and the rejection of the errors, with which they have for some time been troubled. This doctrine the Synod judges to be drawn from the Word of God, and to be agreeable to the confessions of the Reformed churches, Whence it clearly appears (Emphasis added. Note, to use Daane’s term, that here is the window! But a window opening on what? Read on. HCH)—Whence it clearly appears that some whom such conduct by no means became, have violated all truth, equity, and charity, in wishing to persuade the public. (And at this point there follows a long paragraph in quotation marks which lists all the evil and slanderous charges of which some tried to persuade the public. HCH)

To anyone who can read English it must be very plain that not the Conclusion is a window on the Canons, but the Conclusion calls the Canons a window from which it “clearly appears” that all the charges of the enemies against the Reformed faith are wicked calumnies, or slanders. Daane can understand this too, if only he wants to. In the second place, Daane is guilty of misrepresenting both the contents of the Conclusion and the teachings of Reformed theologians in the following paragraphs of his “Voices” article:

In the Conclusion to the Canons the Synod of Dordt declared that anyone who interprets them as teaching that God is the author of sin, or as teaching that God elects and reprobates “in the same manner,” that is, that reprobation is as unconditional as election, is teaching something that “the Reformed Churches not only do not acknowledge, but even detest with their whole soul.”

My interest in why the Conclusion of the Canons was dropped in the Christian Reformed Church for a quarter of a century (until 1959) stems from the fact that a number of Reformed theologians during these twenty five years, and even after the reinstatement of the Conclusion, have projected positions upon the Reformed churches on such doctrines as divine sovereignty, the divine authorship (causality, origin) of sin, unconditional theology, a view of reprobation that is unconditional “in the same manner” as election, and a supralapsarianism each of which falls under the judgment of the Canon’s Conclusion that “the Reformed Churches not only do not acknowledge, but even detest with their whole soul.”

Here are my reasons: 1) Daane persists in saying that the Conclusion declares something about how the Canons must be interpreted. As shown above, it says nothing of the kind.

4) He is guilty of begging the question and of contradiction of the Canons when he assumes that unconditional reprobation is a detestable doctrine.

5) Neither literally nor by implication does the Conclusion anywhere refer to supralapsarianism. Besides, Daane ought to know that there were supralapsarians who signed the Canons at the end of this Conclusion—among them Gomarus. Moreover, if Daane consulted the history of Dordt, he would discover that the Synod was asked to condemn certain strong expressions of supralapsarians, but declined to do so.

Finally I am inquisitive as to which “Reformed theologians and churchmen” Daane has in mind. He must, it seems to me, be referring to Christian Reformed theologians and churchmen. For he writes of the fact that the omission of the Conclusion from thePsalter Hymnal has made it easier for them to project views which the Canons in the Conclusion detest. I must confess, however, that I know of no such theologians and churchmen in the CRC. One would have to search with a candle to find such a champion of the Canons of Dordt in the CRC. In 1967 no one finally dared to stand up and be counted against the Arminianism of Harold Dekker. One of the more conservative groups in the CRC, the Reformed Fellowship, published a book, Crisis In The Reformed Churches, in commemoration of Dordrecht’s Synod, in which the very views of Daane are championed by Klaas Runia.

Hence, I almost come to the conclusion that Daane probably might have us in mind. But that cannot be. We are not Christian Reformed. We do not use thePsalter Hymnal. And in all the years in which the latter did not include the Conclusion, we faithfully preserved it in our Psalter. So if Daane by any chance was looking for a stick with which to whip a dog, he is mistaken. Besides, his stick is nothing but a broken reed!

But let me assure him, too: we believe in the dog wagging the tail, not vice versa. 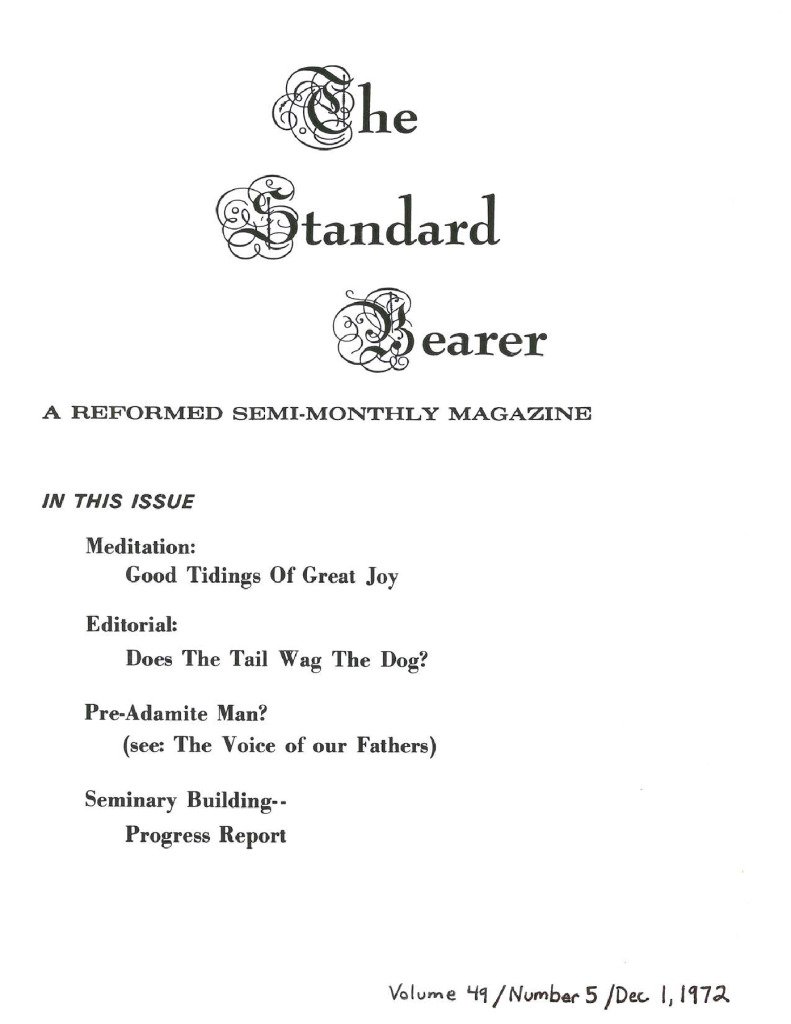