Our attention is now directed to the New Testament evidence on the subject of divorce and remarriage. Our purpose is to present a concise analysis of the pertinent texts and the conclusions we draw from them.

The passage is Matt. 19:3-9, “The Pharisees also came unto him, tempting him, and saying unto him, Is it lawful for a man to put away his wife for every cause? And he answered and said unto them, Have ye not read, that he which made them at the beginning made them male and female, and said, For this cause shall a man leave father and mother and shall cleave to his wife; and they twain shall be one flesh? Wherefore they are no more twain, but one flesh. What therefore God hath joined together, let not man put asunder. They say unto him, Why did Moses then command to give a writing of divorcement and to put her away? He saith unto them, Moses because of the hardness of your hearts suffered you to put away your wives; but from the beginning it was not so. And I say unto you, Whosoever shall put away his wife, except it be for fornication, and shall marry another, committeth adultery; and whoso marrieth her which is put away doth commit adultery.” We would make the following observations.

First, the issue that brought the Pharisees to Jesus in the first place was the division between the school of Rabbi Hillel, who taught that Moses in Deut. 24 allowed the putting away of a wife for every cause, that is, for any reason by which a man no longer found pleasure in his wife, and the other school under Rabbi Shammai which insisted that Moses only allowed a putting away of a wife for moral reasons: he found some moral uncleanness in her. Now they wanted Jesus’ view on this, “Is it lawful for a man to put away his wife for every cause?”

Secondly, Jesus’ answer to them indicates that he does not take the side of either one. Emphatically, Jesus goes to the very beginning of time and states, “Wherefore they are no more twain but one flesh. What, therefore, God hath joined together, let not man put asunder. ” This is God’s original and abiding purpose for marriage. There should be no putting away.

Thirdly, when these Jews counter Jesus’ argument by referring to the writing of divorcement granted by Moses, Christ tells them that this was a temporary interruption, granted because of the hardness of their hearts, and once again insists that the principle to follow is that set forth from the beginning.

Fourthly, Jesus sets forth his own teaching on divorce and remarriage in verse 9. “And I say unto you, whosoever shall put away his wife except it be for fornication, and shall marry another, committeth adultery; and whoso marrieth her which is put away doth commit adultery.”

In connection with this text, we should consider that the point of dispute here centers in the exception clause, “except it be for fornication.” Does this clause modify, “Whosoever shall put away his wife” or does it modify also the rest of the clauses? We believe that it is exegetically correct that it modifies only the preceding clause. The text tells us that whosoever shall put away his wife and shall marry another committeth adultery, etc. The only exception is that a man may put away his wife for adultery and that act itself is not a committing of adultery.

This agrees with other texts in the New Testament. Consider Matt. 5:32, “But I say unto you, that whosoever shall put away his wife, saving for the cause of fornication, causeth her to commit adultery; and whosoever shall marry her that is divorced committeth adultery.” Certainly this text makes clear the teaching of Matt 19:9. A man may put away his wife for the cause of fornication; any other reason would cause her to commit adultery. And whosoever marries a divorced person commits adultery.

We read of this directly in Mark 10:11, 12, “And he saith unto them, Whosoever shall put away his wife, and marry another, committeth adultery against her. And if a woman shall put away her husband, and be married to another, she committeth adultery.” You notice in this text there is no exception clause at all. This does not contradict Matt. 19:9, but confirms that Matt. 19:9 teaches the same thing, viz. that a person divorced and remarried commits adultery.

Finally, the reaction of the disciples confirms that Christ taught something quite different from the popularly accepted teaching of the Pharisees, “His disciples say unto him, If the case of the man be so with his wife, it is not good to marry.” If marriage is for life and a man can only put away his wife for adultery, and even then not be allowed to remarry another, it is not good to marry! To this, Christ answers that such must consider themselves eunuchs for the kingdom of heaven’s sake, verse 12. As difficult as this may be, such is their calling for God’s sake. They must live as a eunuch (one unable to consummate marriage), as obedient citizens of the kingdom of heaven.

The text reads, “But if the unbelieving depart, let him depart. A brother or a sister is not under bondage in such cases: but God hath called us to peace.” We must consider the following points.

First, in this section of the chapter, Paul is dealing with the subject of what to do in cases of mixed marriages (one a believer and another an unbeliever) which resulted because of the conversion of one of the marriage partners.

Thirdly, what if the unbelieving husband or wife decides that he “wants out” of their marriage, what then? Suppose that the unbelieving partner decided that suddenly his spouse has become a religious fanatic and he doesn’t want anything to do with her anymore, since she “got religion.” What must the believing husband or wife do in that case? Paul’s answer is, “But if the unbelieving depart, let them depart. A brother or a sister is not under bondage in such cases; but God hath called us to neace.” The reason is, “For what knowest thou, O wife, whether thou shalt save thy husband? or how knowest thou, O man, whether thou shalt save thy wife?”

Fourthly, we should notice the issue is not remarriage, it is divorce. What is meant by “let him depart.” Is this another ground for divorce, desertion, in addition to adultery? The answer must be no. Paul teaches here that if such a marriage partner wants to live separately, the believer must not feel guilt as if he has done something wrong which contributed to the breaking of the marriage. “Let him depart” means that he must acquiesce in this decision of his partner (one which he cannot prevent anyway) and not feel that he has done wrong by believing in Christ. Such a marriage partner forsakes his wife or her husband in hardness against Jesus Christ. For this reason the child of God is not under bondage (under the condemnation of the law which finds guilty sinners punishable).

Finally, if the child of God assumes this attitude, he keeps the door open for repentance and reconciliation, “For what knowest thou, O wife whether thou shalt save thy husband, or how knowest thou O man whether thou shalt save thy wife? This must be foremost on the minds of the believers, the salvation of their unbelieving spouses, and anything that might possibly contribute toward this is blessed by God. This is further confirmed later in the chapter, “The wife is bound by the law as long as her husband liveth; but if her husband be dead, she is at liberty to be married to whom she will only in the Lord,” I Cor. 7:39. This principle applies to all of marriage; it is a lifelong union which necessitates working out differences.

Here we read, “know ye not, brethren (for I speak to them that know the law) how that the law hath dominion over a man as long as he liveth? For the woman which hath an husband is bound by the law to her husband so long as he liveth; but if the husband be dead, she is loosed from the law of her husband. So then, if while her husband liveth she be married to an other man, she shall be called an adulteress; but if her husband be dead, she is free from that law; so that she is not an adulteress, though she be married to another man. Wherefore, my brethren, ye also are become dead to the law by the body of Christ; that ye should be married to another, even to him who is raised from the dead, that we should bring forth fruit unto God.” In this connection we should observe the following:

First, Paul is speaking here of the “law” in both its outward and inward aspects. Concerning the outward aspect, those included in type and shadow as the civil and ceremonial laws in Israel, Paul says that in Christ we are dead to this law. This is fulfilled by the perfect obedience of Christ on the cross; we are not under the law, but under grace, Romans 6:14; we are become dead to this law by the body of Christ, Rom. 7:4.

Secondly, He also has something to say about the inward principle, viz., love of God and neighbor. From this point of view, the law hath dominion over a man as long as he liveth, Rom. 7:1. He makes specific mention of this law as it applies to marriage: the woman which hath an husband is bound by the law to her husband so long as he liveth,” verse 2. The reason for this binding is the inner principle of the law which is love. Love is for life. A person does not “fall into love” or fall out of love at will; one either loves or hates. The inner principle of the law tells us that the love in marriage is binding for life and only death can free one from this law, verse 3. To marry another while one’s marriage partner is alive is to commit adultery, to violate the law of love.

Thirdly, the power whereby husband and wife are able to abide in this law is, “Wherefore, my brethren, ye also are become dead to the law by the body of Christ, that ye should be married to another, even to him who is raised from the dead, that we should bring forth fruit unto God,” verse 4. In Christ, we are become dead to the law of outward works as a condition to righteousness. No longer is the exhortation, “This do and live” in force; rather now we are married to Christ and the principle of the law of love is written within our hearts and now we can say with Paul, “I live, yet not I but Christ liveth in me.” Now the exhortation is “live and do.”

With this kind of understanding, we can appreciate what Paul tells us concerning the permanence of marriage. With the love of Christ in our hearts, being married to Him, we are bound by this law of love to our marriage partner for life. Only death can terminate this marriage bond. Thus it was from the beginning; now it is restored in us by a living relationship of faith with Christ.

This has many practical points of application for young people either aspiring to marriage or just having entered marriage. We will examine these as a conclusion in our next article, D.V. 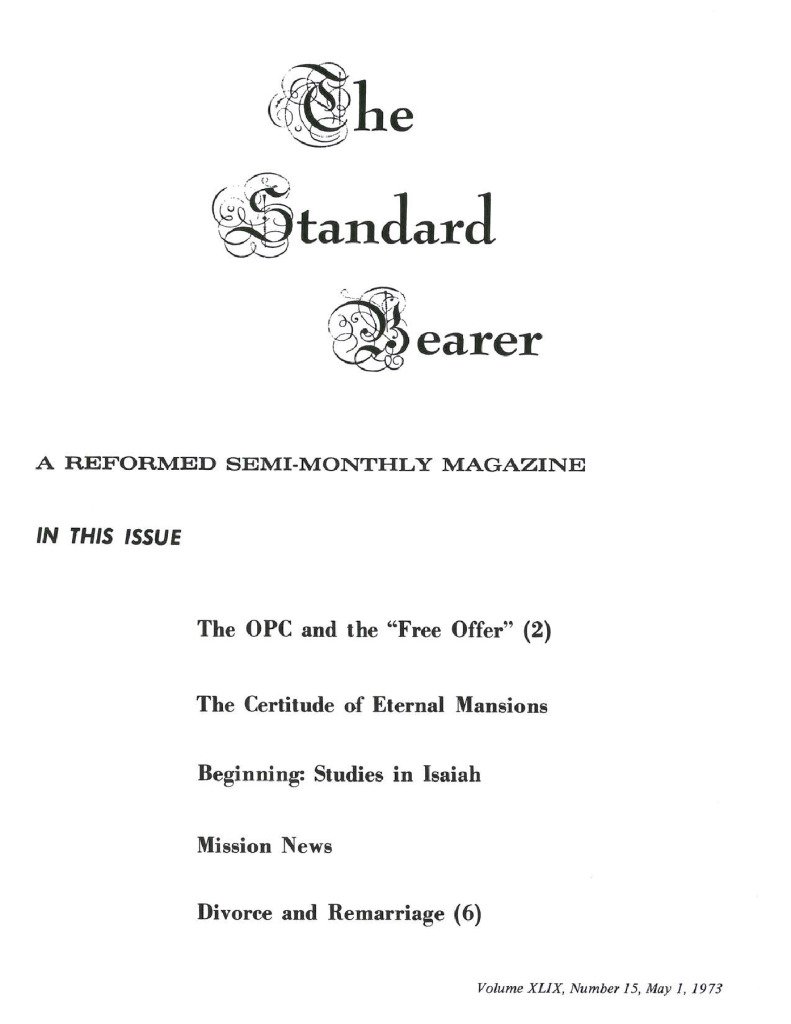