Dispensationalism and the Gentile Remnant

Dispensationalism and the Gentile Remnant

What we have been maintaining, according to Scripture, is that God has but one people in all dispensations, and that therefore, O. and N.T. saints are identified by the same name. This is borne out in the following. “One shall say, ‘I am the Lord’s’; and another shall call himself by the name of Jacob, and another shall subscribe with his hand unto the Lord, and surname himself by the name of Israel.” (Isa. 44:5) The Israel in view here is the spiritual Israel, that remnant according to the election of grace, “whom I have chosen” out of the nation; for the Lord never comforts any but the elect with “Fear not!” (v. 2) To this elect Israel the Lord promises the outpouring of the Holy Spirit. (v.3) As a result of that effusion the holy seed “shall spring up as willows by the water courses,” (v. 4) which was fulfilled at Pentecost. Then the words quoted from verse 5 point to after Pentecost when the Gentiles would become spiritual Israelites indeed.

Dispensationalists will regard the comment of great teachers of the church as lacking in light if they do not produce at every point what they regard as some “dispensational interpretation.” But there is one Bible commentary which they could profitably take as their instructor and rectifier. Neither F. Delitsch nor J. A. Alexander are of much value on this passage. But Matthew Henry has much to teach the dispensationalist. He was by far the adept at “rightly dividing the Word of truth!” He based his thinking on the covenant. His comments introductory to this chapter are, “That the people of God are a happy people, especially upon account of the covenant between them and God. The people of Israel were…a figure of the gospel Israel.” Then he treats “the covenant relations wherein they stand to God.” The basic covenant relation Henry takes to be, “O Jacob my servant! thou and I will be friends!” “The relations wherein they stand to Him are very encouraging. (1) They are His servants.” Here then is the covenant relation of friend-servant! The speaker in this passage, Henry points out, is the God of Israel, a great God, who is God alone, a “God of incontestible sovereignty,” who “stands in relation to, and has a particular concern for, His church. He is the King of Israel and his Redeemer.” Thus He is Israel’s Sovereign-Friend! Henry continues with the covenant relations. “(2) They are His chosen.” So they are His elect. “For those only, like Nathanael, are Israelites indeed, in whom is no guile, and those only shall have the everlasting benefit of these promises.” Next he counts “the covenant blessings which He has secured to” the elect, in verses 3, 4. “The pardon of sin is the inlet of all the other blessings of the covenant” which flow out of mercy and forgiveness through the flood-gate, “Fear Not!” “For SO the covenant of grace runs: ‘I will be a God to thee and to thy seed.”‘ Henry is quite correct when he sees that “Hereby there shall be a great increase of the church.” He then remarks on “the consent they (the elect) cheerfully give to their part of the covenant…For there was one law, one covenant, ‘for the stranger and for those that were born in the land.’ ” Especially the dispensationalist ought to have this pointed out to him: “Doubtless it looks further yet, to the conversion of the Gentiles, and the multitudes of them who, upon the effusion of the Spirit, after Christ’s ascension, should be joined to the Lord and added to the church…(l) They shall resign themselves to God: not one in the name of the rest, but every one for himself shall say, ‘I am the Lord’s; He has an incontestable right to rule me, ‘and I submit to Him, to all His commands, all His disposals. I am and will be, His only, His wholly, His for ever, will be for His interests, will be for His praise; living and dying I will be His!’ (2) They shall incorporate themselves with the people of God, ‘call themselves by the name of Jacob,’ forgetting their own people and their fathers’ house, and desirous to wear the character and livery of God’s family. They shall love all God’s people, shall associate with them, give them the right hand of fellowship…” The point is, Gentiles ‘belong to Israel in the new dispensation.

The same truth is found in Jer. 31:31, “Behold, the days come, saith the Lord, that I will make a new covenant with the house of Israel, and with the house of Judah.” Those days did come in the Christian dispensation, as the writer to the Hebrews applies it to the same in Heb. 8:8-12; Heb. 9:15. The new covenant (mentioned in Luke 22:20and II Cor. 3:6) makes the Mosaic covenant the oldcovenant. But the new is not so because of a change in the law, but in the way the law is given, namely, not outwardly on tables of stone, but inwardly by inscripturation upon the fleshly tables of the heart. Again, on this matter, Matthew Henry has a worthy contribution. “This covenant refers to gospel times, the latter days that ‘shall come;’… Observe, who the persons are with whom this covenant is made — ‘with the house of Israel and Judah,’ with the gospel church, ‘the Israel of God’ on which ‘peace shall be’ (Gal. 6:16), with the spiritual seed of believing Abraham and praying Jacob. Judah and Israel had been two separate kingdoms, but were united after their return…so Jews and Gentiles were in the gospel church and covenant.. . ‘I will be their God and they shall be My people.’ God’s being to us a God is the summary of all happiness. Our being to Him a people may be taken…as a further branch of the promise that God will by His grace make us His people, a willing people, in the day of His power.” With reference to “the house of Israel and the house of Judah,” the writer of the Epistle to the Hebrews affirms, “whose house are we” (3:6) who “hold fast the confidence and the rejoicing of the hope firm unto the end.” That makes the we, whether Jews or Gentiles, believers! See Eph. 2: 14-16; John 11:52; Eph. 1:10.

The prophets continually spoke of the Gentiles being brought into the company of the children of Israel. This is taught in Hosea 1:10, “Yet the number of the children of Israel shall be as the sand of the sea, which cannot be measured nor numbered; and it shall come to pass, that in the place where it was said unto them, ‘Ye are not My people,’ there it shall be said unto them, ‘Ye are the sons of the living God.’ ” A strange teaching it is when it is claimed that “the children of Israel” in this passage refers exclusively to God’s future dealings with natural and national Israel. But so the writer was taught in dispensationalist days. However, Paul in Rom. 9:25-26 explains that the phrase includes elect Gentiles, in the words, “Even us, whom He hath called, not of the Jews only, but also of the Gentiles.” We continue to quote Henry, as he is particularly edifying on this matter of Dispensationalism’s compartmentalizing “Jew, Gentile and the Church of God.” “It is certain that this promise had its accomplishment in the setting up of the kingdom of Christ, by the preaching of the gospel, and the bringing in both of Jews and Gentilesto it, for to this these words are applied by Paul and Peter when he writes to the Jews (I Pet. 2:10). Israel here is the gospel church, the spiritual Israel (Gal. 6:16), all believers who follow the steps and inherit the blessings of faithful Abraham, who is the father of all that believe, whether Jews or Gentiles.” (Rom. 4:11-12) (ital. added) Christians are now, according to Peter, the chosen people, royal priesthood, holy nation and peculiar people (people for a possession), as he teaches in I Pet. 2:9-10.

The prophets believed that the Gentiles belonged to the tabernacle of David. “In that day will I raise up the tabernacle of David that is fallen, and close up the breaches thereof; and I will raise up his ruins, and I will build it as in the days of old, that they may possess the remnant of Edom and of all the heathen (Gentiles) which are called by My name, saith the Lord that doeth this.” (Amos 9:11-12) The breaches in the ruins of the tabernacle of David were closed up to embrace the elect remnant of the Gentiles in the Christian dispensation. The first council of the church in Jerusalem saw the prophecy of Amos fulfilled in their New Testament church. It was the tabernacle of David restored! Christ rebuilt David’s tabernacle — His own church! He built again these ruins “by breaking down the middle wall of partition between Jew and Gentile, and letting in the latter into the gospel church with the former… ‘The remnant of Edom’ design the Gentiles,” (John Gill) Then God had a tabernacle (a house of spiritual, regenerated people) in the old dispensation. It was then called the tabernacle of David (displacing the tabernacle of Moses) because Gentiles were to be brought into it (and were, in David’s day!). It was therefore not something which merely had “been in progress since Pentecost,” (Scofield) an absurd idea, for the tabernacle of David has evidently been in progress since David. Nor did the Jerusalem church in their joyous contemplation of this now fulfilled Amos-passage even dream that its realization meant “re-establishment of David’s earthly kingdom of power over national Israel.” They saw in that tabernacle thechurch, the “one body, ” “the household of faith,” the “holytemple in the Lord,” the “habitation of God through the Spirit.” (Eph. 2:16, Eph 2:19, Eph. 2:21-22)

There are then two Israels: a carnal and false Israel, and a spiritual and true (regenerate) Israel. Jesus tested many who applied to Him according to this distinction. He said to the Syro-Phenoecian woman, “I am not sent but unto the lost sheep of the house of Israel.” (Mt. 15:24) His meaning was not that He was sent only to the natural clan of Jacob, for some of them He excluded as “not of My sheep.” (John 10:26) Paul also saw this exclusion when he taught, “they are not all Israel that are of Israel.” (Rom. 9:6) No, this house Jesus referred to is “built up a spiritual house,” which “ye,” newborn babes (regenerated) are (I Pet. 2:2-5)! Scripture is full of references to the spiritual and elect Israel: John 1:31; Acts 5:31; Acts 13:23; Acts 28:20. In every age believers of every race desired nothing more than to belong to that Israel! 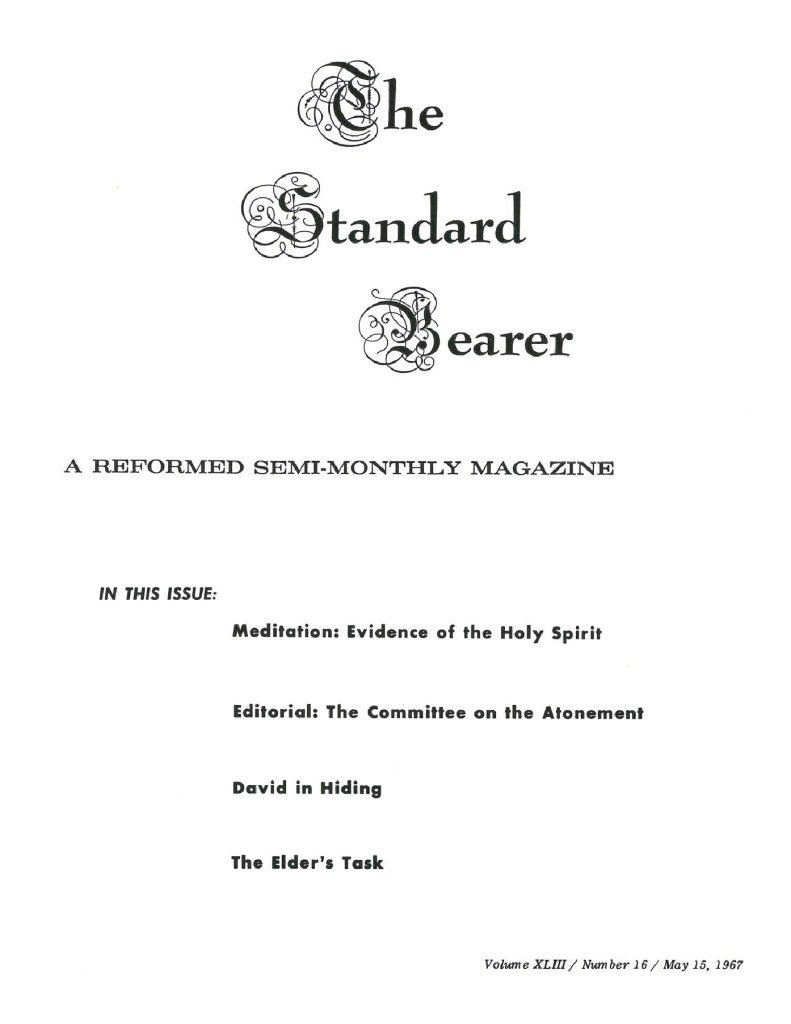