It is a distinction of Dispensationalism, not of Reformed truth, to speak of spiritual blessings and temporal blessings. The distinction is made because it is mistakenly believed that God makes promises that apply to all men without exception, and that He has blessings for all men, if not spiritual, then temporal. But the promises of God are all made exclusively in Christ. Not one of them can be of any good to those outside of Christ. There is no favor of God shown outside of Christ. To put it more pointedly, there is no favor of God shown to any apart from the Cross. Outside of the purchased mercies of Calvary, there is no favor shown men. To speak of special mercies in Calvary and common mercies outside Calvary is plain Modernism. Any outside of Christ are out of the favor of God. He has such in His view only as the objects of His wrath. There is no place of refuge or hope for a man except in Christ. If it be asked, “Does not God do many good things to all men, including those outside of Christ, sending rain upon the just and the unjust, and filling even the wicked with food and gladness?” (See Ps. 17:14and Acts 14:17). This is true. But those good gifts are not blessings to the wicked. The Lord says they are not inProv. 3:32-35. The righteous enjoy His secret, but the froward are an abomination to Him. “The curse of the Lord is in the house of the wicked: but He blesseth the habitation of the just.” Those outside of Christ He scorns, “but He gives grace to the lowly,” not to the wicked. The wise shall experience glory, but fools shame. Good gifts, according to this Word of God, are common, but not blessings. Good gifts to the righteous are blessings, but to the wicked they are like food given to bullocks prepared. for the day of slaughter (cp.Jer. 12:3 with Jas. 5:5). Temporal gifts do not make temporal blessings. For blessings are not temporal; they are spiritual. Temporalities are common; but mercies are particular.

One of the greatest promises of God of the highest spiritual order is found in Heb. 13:5, where we read, “for He hath said, ‘I will never leave thee, nor forsake thee.’ ” Now, who would conceive of this promise as for the Jews, and not for the Church? Yet to whom was this precious promise first given’? To Jews – Moses and Joshua (cp. Deut. 31:6 with Josh. 15). This proves that there are evangelical promises in the Old Testament, and that, according to the writer of the Epistle to the Hebrews, they are for the one Church of all ages. (cp.Heb. 12:22-24 with 13:5-6, marg. refs.). Now, let not Dispensationalists object here to say we are “spiritualizing” in such a way that we, the Church, take all the blessings of Scripture, and leave all the curses to the Jews, that we thus rob the Jews. For all the Jews who have but the faith of Abraham are with us partakers of the same promises. We do not rob them of anything. Rather, Dispensationalism, by its very nature, makes its adherents religious thieves who rob believers, the Church, whether Jew or Gentile, of the comfort meant for them in the gracious promises of the Old Covenant.

Since the Puritans and Reformers were quite aware of the dangers inherent in this faulty interpretive system, it will be most instructive to closely consider a condensation from John Owen given in answer to the plea that promises made to Old Testament Israel belong exclusively to the Jews. “If this plea be admitted, I know not any one promise that would more evidently fall under the power of it, than this we have now in consideration. It was made to a peculiar person, and that upon a peculiar occasion; made to a general or captain of armies, with respect to the great wars he had to undertake, upon the special command of God. May not a poor, hungry believer say, ‘What is this to me? I am not a general of an army, have no wars to make upon God’s command. The virtues of this promise doubtless expired with the conquest of Canaan, and died with him to whom it was made!’ ” But Owen goes on to maintain “the sameness of love that is in all the promises, their establishment in oneMediator, and the general concernment of believers inevery one of them, and that on whatsoever occasion given. This promise to Joshua is here applied to the condition of the weakest, meanest and poorest of the saints of God, to all and every one of them, to the saints of old, even Abraham, Isaac, Jacob, David and the residue of them who walked with God in their generations. So that we may say boldly (without staggering at it by unbelief) ‘the Lord is my Helper.’ This is a conclusion of faith! because God said to Joshua, a BELIEVER, ‘I will never leave thee, nor forsake thee‘ (though upon a particular occasion, and in reference to a particular employment), every believer may say with boldness, ‘He is my Helper !’ ”

It is not possible that believers be not led infallibly to glory. Yet it is possible that their comfort along the way to a great extent be undermined. This occurs when their confidence in the promises of God is either weakened or removed. True believers have an unshakable faith in the divine, verbal inspiration of Holy Writ, and in the inerrancy and veracity of the promises. They are not so likely to go astray at this point. But there is the temptation before them to yield to the subtle persuasion that the great majority of God’s promises do not belong to Christians at all — they are but a “parenthesis” people — but, because made to the people of the Old Covenant, are the property of the Jews only.

Dispensationalism does go to the extreme of belittling the Old Testament, its importance and value. Some of its disciples cannot criticize strongly enough those who do not limit themselves entirely to the New Testament. This is done, not by open atheists, or by known Modernists, but by those who are the reputed champions of orthodoxy, who profess the plenary inspiration of Holy Scripture. So the alert defenses of the Christian may become slowed and deadened, without his awareness, merely because the ministry he sits under is that of men faithful to the “fundamentals,” well versed in Scripture and completely dedicated to Christ. Then when they come out with their “dispensational truth,” they “must be right!”

We say once again, Dispensationalism compares in many ways to Modernism, in fact, has in it the seeds of Modernism, and so can be no adequate defense against or refutation of Modernism. Modernists are like King Jehoiakim, who with his pen-knife cut whole sections of the Scripture out of the Book of the Covenant and threw them into the fire. The teachers of “dispensational truth” have often called attention to these destructive “higher critical” methods of the Modernists in their handling of Scripture. Thomas Jefferson’s version of the New Testament is a good example of this pernicious method. Hence the tendency is to allay the fears in the minds of the hearers of these who are regarded as “sound expositors of Scripture” and “internationally known Bible teachers.” The tendency is to be favorably impressed by men who “stand for the whole Word of God” and who earnestly denounce “modernism” and expose “evolutionism.” The inference is, here certainly we must have men who may be safely followed in all their assertions! Yet both dispensationalism and modernism are productive of a fractional, pen-knife edition of the Bible, so that “the whole Word of God” is hardly recognizable. For Modernists claim much of the Old and New Testaments to be spurious; while Dispensationalists claim much of both Testaments belongs not to us. Both pen-knife addicts render much of Scripture a dead letter.

Of course, it may be argued that many promises were given to Israel and so can have no direct reference to the Church, that therefore Christians cannot fairly appropriate them, nor justly expect their fulfillment to them. But if this were true, then Rom. 15:4 would not be true: “For whatsoever things were written aforetime, were written for our learning, that we through patience and comfort of the Scriptures might have hope.” If certain passages of God’s Word do not belong to me, how can they be of comfort to me? how can that bring me hope which belongs exclusively the Jews? Christ came not to limit and segregate the promises, some to Jews and some to Christians. He came “to confirm the promises made unto the fathers, and that the Gentilesmight glorify God for His mercy.” (15:8-9)

Dispensationalists, who regard certain vast areas of the Old Testament of carnal and earthly content, charge that their opponents misapply these parts to themselves in that they “spiritualize” them. We turn that around, charging that they “sectionize” and “atomize” the Scriptures, setting the exact boundaries of mutually exclusive dispensations, and dividing to distinct companies various parts of the Word of God. This method erects arbitrary hedges which bar Christ’s sheep from large portions of the green pastures of His Word. For, as they say, the Old Testament does not contain “Church truth,” hence is not for us. Neither do the Gospels and most of the Revelation. Ultradispensationalists leave for the Christian no more than a few prison epistles of Paul as that which applies to the Church today. The epistles of Peter belong to a coming age and to the Jewish remnant in the future great tribulation. The Sermon on the Mount is reserved for the Jews in the promised millennial kingdom.

What is so fundamentally wrong with Dispensationalism is that it has a wrong and not the most basic starting point. They base God’s plan of the ages upon their arbitrary and subjective scheme of seven dispensations. This is not to “rightly divide the Word of truth,” but to turn the Scriptures exactly upside down. All of God’s works and ways, all of history are based upon the everlasting Covenant. His plan and purpose are with a view to the ultimate complete realization of His covenant. The various dispensations are but dispensations of the covenant, parts of the one grand foreordained whole. God’s own essential, inherent life is an intertheistic, trinitarian, covenant life. Each of the three persons of the divine trinity conspire to realize the fulfillment of the great design of the covenant, which was that God in Christ should dwell in the glorified election of grace in the New Heavens and New Earth. The three persons unite to secure this design. All their acts of creation, providence and grace were and are performed to this end. The Father ordained the Son to be the incarnate God, the anointed Mediator in His office of prophet, priest and king. The Spirit pledged Himself for the effectual application of the purchased redemption of Christ to all its predestined beneficiaries. Therefore, in Christ God would establish, maintain and fulfill His covenant. He would prepare the way for its realization, actually provide all things necessary to that end and guarantee the success of it. There is God’s plan of the ages. In it we have a biblical dispensationalism, which alone is in harmony with Ephesians 1:10. 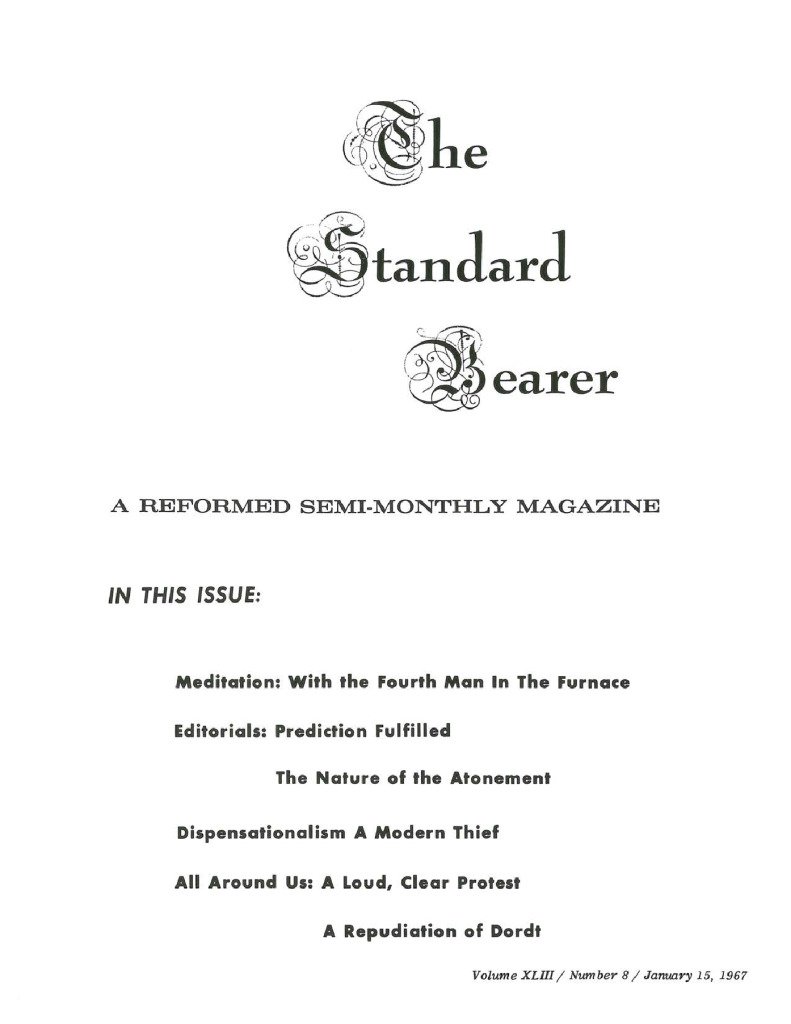