Dinosaurs and Other Monsters

Dinosaurs and Other Monsters

One thing that has attracted the attention of the nation in recent months is the dinosaur. Not only has the evolutionist continued his theorizing concerning the subject, but a popular movie has caught the imagination of the nation. The movie is, of course, in our estimation, out of bounds for the Christian. Yet the movie has generated much additional hype concerning dinosaurs. Little children want models of these beasts. Popular eating places offer mugs or other toys as enticement to come to their establishments. Cartoon characters portraying the friendly dinosaur are popular with the children. Questions are raised and discussed concerning these monsters. When did they live? What brought them to extinction? Children like to ask the question, “Were there dinosaurs in the ark?” Scientists too have been pointing to supposed reasons for the apparently sudden demise of the dinosaur. Science textbooks come with “answers” which many presume to be scientific and factual. Commonly it is claimed now that a large meteor must have struck the earth causing such disruption that life became impossible for these large beasts. Recently the supposed spot where this meteor crashed into the earth was located off the coast of Mexico.

The question would be: what does all of this have to do with the end of the age? What bearing do fanciful imaginations have on the testimony of Scripture concerning Christ’s return?

Several articles published by the Institute for Creation Research (El Cajon, CA) were brought to my attention. The author of ‘one article, “Dinosaurmania Strikes Again,” was Ken Ham; another is an article written by Henry M. Morris. Ham points out the various misconceptions that Christians have concerning these mighty beasts. Some have denied their very existence. Others have asked whether these animals were in the ark at the time of the great flood. Ham maintains that “dinosaurs are used more than any other topic by evolutionists to brainwash our children into accepting evolutionary ideas and rejecting the Bible as God’s inerrant Word.” He quotes from a book, A New Look at the Dinosaurs, by Charig:

“…we can only confess our supreme ignorance of the real causes of dinosaur extinction and say, quite simply: ‘We don’t know.”

Ham continues to explain his own viewpoint:

It is interesting to note, however, what the author says when trying to explain why the dinosaurs died out: “Every year people come up with new theories on this thorny problem. The trouble is that if we are to find just one reason to account for them .all, it would have to explain the deaths, all at the same time, of animals living on land and of animals living in the sea; but, in both cases, of only some of those animals, for many of the land-dwellers and many of the sea-dwellers went on living quite happily into the following period. Alas, no such one explanation exists.”

But one such explanation DOES exist! If you change the timescale to thousands of years instead of millions, and then think about the event of the Flood of Noah’s day and the animals that escaped on the Ark, there is an explanation that fits with what Charig stated above.

Ham continues by pointing out that there is reason to believe that forms of the dinosaur family existed even up to modern times. He points to writings that refer to “monsters” which seem to fit the description of the dinosaurs.

Morri$ in another article, also comments on the fascination with dinosaurs. He states:

This almost worshipful fascination (with dinosaurs) is nothing new, though its extent is growing explosively. One wonders how many leading modern evolutionists were drawn into evolutionism through their childhood study of dinosaurs. Stephen Jay Gould, for example, testifies that he got his start that way, and he is probably today’s leading spokesman for evolution.

Morris quotes Scripture to show that these large monsters are mentioned from Genesis on. He states, “The Biblical writers, inspired by God, also wrote about dragons. The first reference to created animals, in Genesis 1:21, says that ‘God created-great whales,’ but the Hebrew word for ‘whales’ is translated ‘dragons’ in over 20 other passages. Note especially Isaiah27:1:’InthatdaytheLord…shall punish leviathan the piercing serpent, even leviathan that crooked serpent; and He shall slay the dragon that is in the sea.”‘

One finds references to the Beast and the dragon in connection with the development of the antichristian world power. We read in Rev. 13:3, 4, “All the world wondered after the beast. And they worshiped the dragon which gave power unto the beast.”

Morris, in his article, points out that what we see today is fulfillment of that Word in Revelation. The world, especially its youth, is obsessed by dinosaurs (dragons). This is seen in the appeal that movies and video games have to the youth in which monsters abound. Is it coincidence that these “dragons” are the focus of attention at the end of this age? Morris points out that “Jurassic Park,” the movie attracting record-breaking audiences, is made by Hollywood’s leading “New Age” producer.

One of the signs of the end of the age is that many follow after the lie. False christs and false prophets abound. God sends strong delusions that these might believe a lie (II Thess. 2:11). Perhaps as never before one sees this in our own time.

There is today the practice of witchcraft. Even some in the churches join hands with other world religions, including witches, to establish a certain concept of morality which must govern all peoples. It is not strange, then, that a certain admiration also grows towards great “dragons.” It is not the cross of Christ which is the center of attention-but the serpent and its adherents.

The world has been using this fascination to teach its theory of evolution. This has been true for the past 50 or more years. I recall distinctly the sign of “Sinclair” gasoline with its picture of the dinosaur which I saw in my childhood. Today we have not just an advertising picture, but a portrayal of the dinosaur as the prime example of the evolutionary process. This affects the youth – especially those very young. That is the intent of Satan, no doubt.

All of this points out how important it is that parents carefully supervise that which their children read, watch, and learn. We might minimize the seriousness of the attempt of the world to indoctrinate our children. But be sure that there is a goal which the world and Satan himself have in mind. That goal is to subvert the church, to contradict the Word of God, to persuade many to believe the lie. God sends strong delusion into the world. The world would want to impress this delusion also upon the church – especially its youth.

The task of the church and Christian parents is to teach children from their youth on the truths of Scripture. Genesis 1-11 is especially important. That is not a section of the Bible that is insignificant. Genesis is the first book in the Bible -but also foundational. He who questions or denies Genesis 1-11, soon loses the entire Bible as the inspired Word of God. We must, therefore, remind our children what Scripture says concerning origins and great dragons. By all means remind them of that Beast who gives power to the dragon at the end of time. The world may hold to its dragons and speculate about its dinosaurs, but we have the cross of our Lord Jesus Christ. 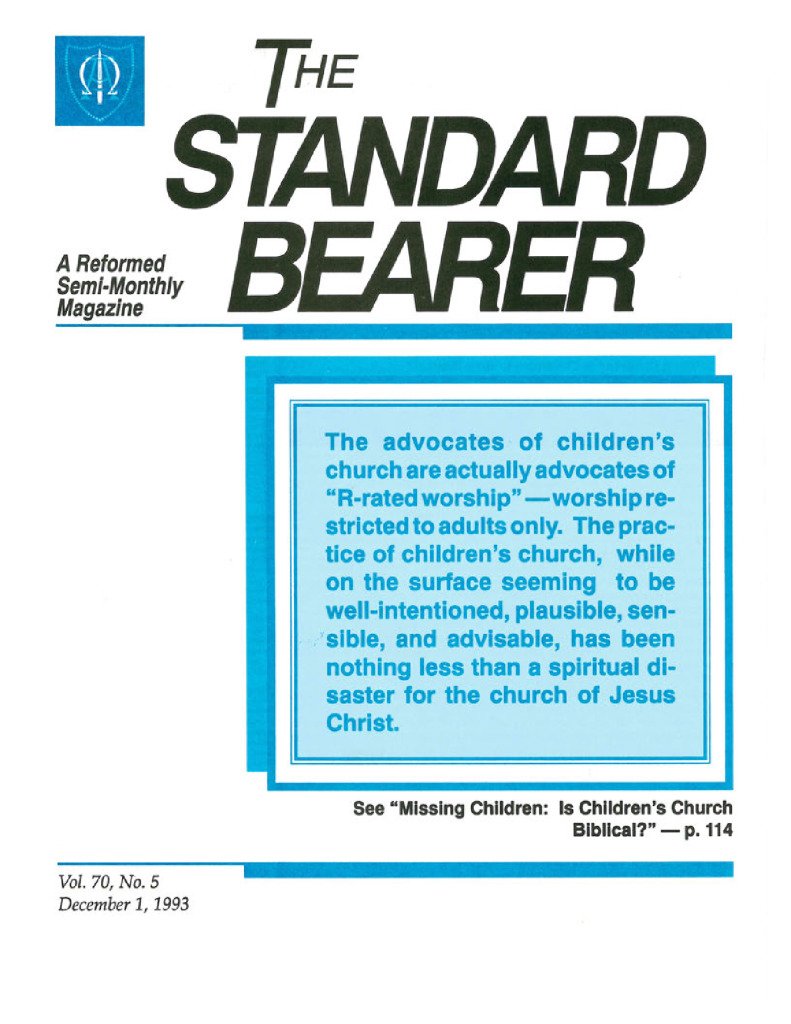