As I sit here writing, fires are still raging out of control in many areas round about us. Hot Santa Anna winds have seared the already dry and thirsty hillsides, ravines and canyons. Bone dry brush and grasses need but a spark to change the country into a roaring inferno. A few days ago fires were racing through the canyon south and east of us, threatening the outskirts of the city. In one day sixty-six different fires were reported in scattered areas. Some of these were obviously started by incendiaries, who are bent on adding misery to misery and terror to terror. They are as cold blooded as the looters who step in an area as soon as the evacuees have left their homes and properties behind. Hundreds of thousands of acres of land lie burnt and black, hundreds of homes have been destroyed, and many hundreds of people have sought refuge elsewhere, some of them not able to return to their homes again. Anxiety, terror, horrible dread have filled the souls of hundreds of thousands who saw their properties threatened.

And calls the earth from sea to sea;

From beauteous Zion God shines forth,

He comes and will not silent be;

Devouring flame before Him goes,

And dark the tempest round Him grows.

And still the hungry flames sweep onward, spreading destruction everywhere. Flames rise as high as fifty feet, billowing forth in mushroom clouds of angry smoke. One hears the crackling of the flames, the roar of the wild fire, the dull thud of trees and timber falling to the earth. One sees the fifty mile an hour gale striking first from one direction and then from another, turning everything into a holocaust. Yellowish orange smoke Climbs into the blue skies, rolls across the path of the sun, casting an awesome shadow upon the earth, spreading burning cinders and hot ashes in its wake. One only wonders how long this will last.

And yet no one seems to regard the hand of the Almighty is He directs His devastation wherever He wills. No one listens to the voice of the Most High in the firestorm that covers the land. No, but fear does grip the human heart with anxious dread of what may follow. The protective covering of the soil is now swept from the hillsides, while the anticipated winter rains are in the offing. Even though it has been a year and a half since sufficient rains have fallen at one time to penetrate the soil deep into the earth, these rains are due and may very well come. For the sake of trees and plants, animals and man these are eagerly anticipated, since the drought and the accompanying fire threat have actually been with us for some time. And yet this anticipation is not without fear.

One thinks of the incessant rains of the early months of 1969. Day after day torrents of rain fell in the valleys, mountains of snow heaped up in the higher altitudes. As the snow melted and the rains continued to fall, the streams grew into rivers and began to break their bounds. Dry riverbeds became raging, foaming rivers. The force of the water carried along with it huge boulders, trees, houses, and whatever came in its path. Bridges and roads were washed out. The water turned and twisted to dash along wherever it pleased, even at times down city streets or wherever it could find a channel. Many homes had to be evacuated as this wild, threatening monster reached out to destroy.

Probably the worst of all were the mud slides. Rain soaked hillsides were burdened with the extra weight heaped upon them. Slowly they began to move. Houses built on the hillside sagged, crumbled, and fell. In other areas unbelievably large masses of saturated mud began to shift ever so slowly, but soon with gathering momentum spread across roads, down into ravines, and with increasing speed started down toward the valley. The weight and the pressure of the mud caused trees to topple, boulders to tumble along; in fact, everything that was caught up in its grip was carried along or crushed to bits. Like an ever-growing snowball this ugly mass slithered into the valley, oozing into and out of houses, but leaving from three to five feet of hard dirt inside and outside of the buildings.

This could very well happen again while the hillsides lie naked and unprotected. Yet no one pauses long enough to recognize God’s judgments descending upon the earth. There is talk of natural causes, freaks of nature, catastrophes, and the like, but God is not in all their thoughts. One is reminded of the condemning statement of Revelation, describing a world that is ripe for judgment: “And yet (in spite of all the vials that were poured out) they repented not!” Man goes his proud and wicked way, eating and drinking, marrying and giving in marriage, still dreaming of a greater and better tomorrow.

Jesus tells us that all these visitations are the beginning of sorrows. (Matthew 24:8). He was speaking to His disciples, and is therefore speaking to His church, for the word for sorrows could well be translated as “birth pangs.” God began a new work years ago already at the tomb of Joseph when He raised Jesus from the dead. The earth trembled and quaked as the Lord opened the vacated tomb to proclaim to us the resurrection Gospel. Since that time God has carried out His work of renewal through the exalted Christ in the hearts of His people, implanting in them the new, heavenly life, preparing them for the resurrection still to come.

But in the meantime, all creation groans and is in travail together even until now. How loudly creation groans as tremors of earthquakes rumble in the ground and rattle the windows of our homes! How loudly the creature groans as rabbits flee, as fires roar, as waters surge and boil in turbulent rage! Along with us they are awaiting the renewal of all things at the time of the final manifestation of the sons of God. (Romans 8:18-23).

Birth pangs! God loudly proclaims through all this devastation: “Behold, I make all things new!” The waiting church is in the midst of it all, but sees the power of the Almighty and hears His reassuring word: “Behold, I am with you alway, even unto the end of the world!” She bends herself as she cringes in labor pains, realizing very well that these are but forebodings of harder bearing down pains that are still to come, as God through her brings forth a new creation.

These are the beginning. One could translate that as “the principle.” The basic fact is that even now old things are already passing away to give place to the new. The groaning creation tells us also to groan in eager expectation as we wait for our final adoption, the redemption of our bodies. God is preparing us for that glorious Day when time will be no more, when all the weary night is past and we awake in righteousness in the new creation.

Zion shall be redeemed with judgment, and her converts with righteousness. (Isaiah 1:27).

He calls aloud to heav’n and earth

That He may justly judge His own;

My chosen saints together bring

Who sacrifice to Me alone;

The heav’ns His righteousness declare

For God Himself as Judge is there. 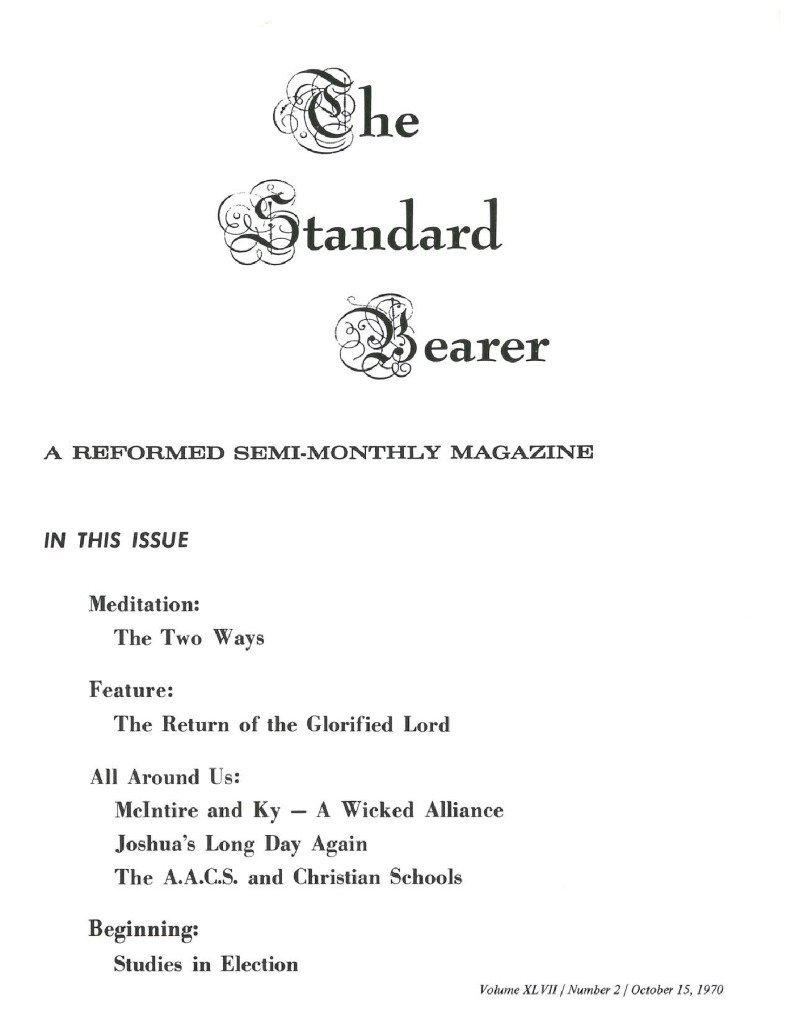