As might almost be expected, in the light of history, the ecclesiastical developments in New Zealand included not only the doctrinal Appeal by the brethren Koppe and van Herk—an Appeal which was the climax of the battle for doctrinal purity and doctrinal discipline waged by the Reformed and Presbyterian Fellowship of Australasia. Said developments also included personal appeals directed to the Synod of 1971 by three brethren who played a leading part in the struggle in New Zealand and whose names are connected with the publication of the Reformed Guardian. These three brethren are W. van Rij, who at the time when the struggle began was elder in the Session (consistory) of Christchurch, and J. Koppe and B. van Herk, officebearers at Silverstream-Wainuiomata. I wrote: as might almost be expected, there were personal cases involved. Why? Because history shows that almost without exception when there is doctrinal controversy, those involved becomepersonally, on one side or the other, the object of attack. And frequently, as has also been the case in our Protestant Reformed history, it is those who stand on the side of the truth of our confessions who become the object of a perverted discipline, a discipline which therefore amounts to persecution. This was the case also in New Zealand, as we shall see.

About this perversion of discipline in the above-mentioned instances I want to report and comment.

My reasons are several. In the first place, I want to call attention to the issue of this discipline as such because Christian discipline is one of the marks of the church; and along with the doctrinal corruption in the Reformed Churches of New Zealand there has been corruption of discipline. This is serious! To put it in the language of Article 29 of our Netherland Confession, the Sessions of Christchurch and of Silverstream-Wainuiomata, and also the Synod, have exhibited one of the marks of the false church, which “persecutes those who live holily according to the Word of God, and rebuke her for her errors. . . .” In the second place, I want to encourage the brethren involved: not only by assuring them that we believe they have been unjustly treated, but also by reminding them that this very persecution, though bitter and painful, is nevertheless a good sign. It is an indication that they are on the right side and that they are in good company. They may “rejoice and be exceeding glad: for so persecuted they the prophets that were before you.”

In the third place, I want to call attention to this perversion of discipline because it underscores the truth of my earlier evaluation of the doctrinal decisions of Synod. I wrote earlier that some of the decisions of the Synod seem at first glance to be rather sound decisions and that, in fact, they almost seem to declare what the brethren of the Fellowship have been fighting for. Nevertheless, we have demonstrated that this was not the case. And now I call attention to the fact that this very perversion of discipline and persecution of the brethren van Rij, Koppe, and van Herk is proof that our evaluation of Synod’s doctrinal decisions is correct. For, certainly, if Synod had at all intended to express agreement with the petitions of the Doctrinal Appeal, they would have hastened to advise the Sessions concerned that they must by all means undo and apologize for the discipline imposed on these three brethren; and both Synod and the Sessions—in fact, all the churches—would instead have thanked these brethren for sounding the alarm against these serious doctrinal deviations. Nothing of the kind was done, however. Synod itself did not actually treat their cases. The Sessions involved have not retracted and apologized for their discipline. In fact, in one instance, at least, they have continued to insist that the brother involved must still apologize. This is rather clear evidence, therefore, that in spite of some good appearances and some apparently sound or conservative decisions, the Synod nevertheless did not justify the brethren in their doctrinal stand and their battle against the deviations for which Dr. Runia was largely responsible.

I am writing this not only for the sake of our American readers. But I hope that this may come to the attention of not a few in New Zealand, so that when they see this evaluation from an “outsider,” who is able to judge objectively, their eyes may be opened to the injustice done in the Reformed Churches and to the dangers which are threatening “down under.”

Moreover, I will base all that I write on the documents and decisions which the brethren involved have sent me.

What Was The Issue?

Very simply put, the issue which led to the imposition of discipline in these cases was the publishing and distribution of the Reformed Guardian, in which the alarm was sounded concerning the doctrinal deviations of Dr. K. Runia.

This was the issue, first of all, in the case of Mr. Wm. van Rij, who, at the time when all this began, was elder in Christchurch’s Session. Here is the documentation, taken from the letter of separation sent by Mr. and Mrs. van Rij to the Session of Christchurch under date of October 18, 1971:

1) Dr. Runia himself wrote to the Session on January 2, 1970. In this letter he deals with van Rij’s article in the Reformed Guardian on “The Crisis in the Reformed Churches.” And Runia wrote, in part: “The accusations show a complete, lack of theological knowledge and yet these brethren present themselves as the defenders of the Reformed Faith. All this means that harm is done not only to my good name, but to the cause of our churches and of the Reformed faith in New Zealand and Australia. I cannot see it otherwise than that these brethren have grievously sinned against the ninth commandment (cf. Heidelberg Catechism, Lord’s Day 43).”

2) The Session of Invercargill wrote in a similar vein: “It (van Rij’s article) betrays a mentality which is definitely contrary to the spirit of the ninth commandment, and which will serve to evoke extremism in the minds of those who are susceptible to it and its inevitable end: schism. The session considers that br. van Rij has failed—and has acted contrary to his duty as an elder of our churches. It trusts that your Session—while seeking the guidance of God’s Word and Spirit, and in loving concern—finds its way to deal with the brother in a manner which will promote the wellbeing of our churches to the glory of the Name of the Lord of the Church.”

3) Rev. N. Hart, minister of the Reformed Church of Avondale, wrote on January 2, 1970 his reaction to the first issue of the Reformed Guardian: “While I realize that the editorial does not bear Mr. W. van Rij’s name, his appeal for ‘. . . assistance to continue to send forth this Newssheet, each month’ is nothing short to raising ‘mutiny in the Church’: his name is associated with this appeal. Even if Mr. van Rij did not make that statement personally, it is my desire that Mr. van Rij be led to send a public apology to the Session of the Reformed Church of Avondale, by such action as your Session sees fit. At present we could not accept Mr. van Rij in full communion, until he publicly repents of this incitement to mutiny, (see Psalter Hymnal, 1959, Form for the Celebration of the Lord’s Supper; p. 93).”

4) The Session of the Reformed Church of Geelong wrote under date of February 20, 1970: “After carefully studying the letter Mr. W. van Rij sent round to the sessions and taking note of the answer of the Board of Directors of the College this session would very urgently plead with you to ask Mr. van Rij to withdraw at least the personal accusations against Dr. K. Runia.”

The Session itself also took action, as we shall see; but it refused to adjudicate the above charges against Mr. van Rij, serious charges of sin against the ninth commandment in connection with the publication of the Reformed Guardian.

At Silverstream-Wainuiomata it was no different. After the Reformed Guardian made its first appearance, the Session adopted and placed in the bulletin the following: “Session deplores the action taken by Elder J. Koppe in distributing copies of the Reformed Guardian, Vol. I, No. 1, among members of our Congregation before Session could formulate its answer to the questions under discussion.” And as early as February of 1971 the Session began to take disciplinary action. The following decision was made: “‘That Elders van Herk and Koppe be suspended from office, as they do not adhere to their ordination vow, in which they promised to submit to the government of this church, in all things pertaining to their office. This suspension to be lifted as soon as these Elders refrain and disassociate from participating in publishing of the Reformed Guardian, and give evidence of their willingness to the Church court.” (Quoted from letter by J. Koppe) And this was also published in the Church bulletin even before a neighboring consistory was consulted, so that it was made known to the congregation that “after lengthy discussion Session decided not to tolerate Elders participating in publishing the Reformed Guardian anymore and to inform the Wellington Session of this decision.” As is stated in the Appeal of these two brethren, “The Church of Silverstream/Wainuiomata has PUBLICLY STATED the fact, that they decided to have us removed from this holy office in the church of Jesus Christ, both in the Silverstream/Wainuiomata bulletins of 21-2-’71 and 11-4’71, and in PUBLIC in the Congregational meeting at Silverstream, on 19-7-’71.”

Again, all of this was due to the publication of theReformed Guardian. These brethren were on this account publicly held up to their congregation as being guilty of some gross sin which made them worthy of removal from office, though no specific sin on their part was ever proven.

Now before we proceed with this history, three facts should be emphasized:

1) While serious charges of gross sin were made, none of these charges was ever substantiated and proven. It is, of course, one thing to make such charges; it is quite another thing to produce evidencethat these charges are true.

2) The publication of the Reformed Guardian as such was no sin. In publishing this paper and in writing about the doctrinal deviations, the brethren were not only writing about matters which were in their very nature public; but they were also doing the very same thing that Dr. Runia was doing. It is indeed strange that Dr. Runia might publish his views in magazine and book; yet the brethren might not publish their disagreement with and opposition to those views—even though Trowel and Sword would be closed to them and even though these matters had not as yet been adjudicated by any Synod.

3) At no time—and this must be emphatically stated—did the brethren cast any personal aspersions or slanders on the person of Dr. Runia or anyone else in these public writings. Indeed, they accused Runia of false doctrine; but there never was any personal note in anything written. Never, for example, did they accuse Runia of being an unbeliever, as they were accused of doing.

Yet, mind you, neither the Sessions involved nor the Synod of 1971 have to this day done anything to remove the serious charges laid against these brethren!

What was done by these bodies we shall see next time. 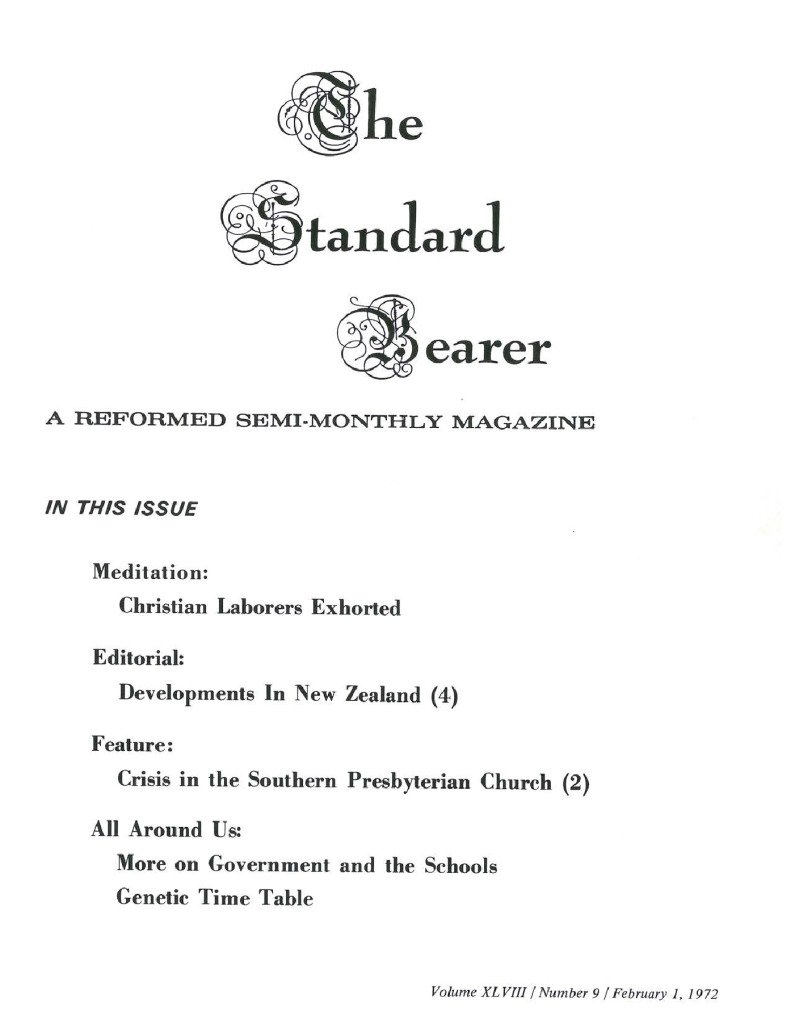