The first five books of the Bible are joined together into what is called the Pentateuch (five books). The thread of history runs through each one and joins them together into a bond of unity. Genesis marks the beginnings of creation, the patriarchs, and the nation of Israel. Exodus follows this nation out of Egypt to Sinai, where they receive the laws of God, the spiritual basis for the theocracy, God’s rule among them. Leviticus gives additional details of the laws God gave at Sinai, uniting them especially to the blood of atonement, the lamb the type of Jesus Christ. Numbers gives an account of the departure from Sinai and the wanderings in the wilderness for forty years, a period of history that demonstrates man’s unworthiness to enter Canaan except through the blood of the covenant. Now we come to Deuteronomy, a final rehearsal of the laws already given, only now to the new question that was about to enter Canaan. It closes with the death of Moses at the very edge of Canaan.

As was the case with the other books of the Pentateuch, the name given to this fifth book in our King James Version is derived from the Septuagint, which was also taken over by the Latin Vulgate,Deuteronomium, “second law”. The Hebrew text begins with elleh haddaevarim, “These are the words”. Later the Jews called this book, Mishneh hattorah, Hebrew words taken from Deuteronomy 17:18, “copy of the law”.

This seeming technical reference to the name of the book does bring up the important question as to how we are to view this book which is calledDeuteronomy, literally the second law. On the surface it would seem that God adds to the laws which He gave at Sinai and here in this book we have, as it were, volume two of the book of the law. This however is not correct. The reference toDeuteronomy 17:18 is valid only if we interpret these words to mean copy or repetition of the laws previously given by Moses. In Deuteronomy, we do not have new laws given, but a recapitulation and summary as well as application of them to the people as they are about to enter the holy land.

Moses was the author of the book. As is the case in many of the books of the Bible, higher criticism tries to drive a wedge between the first four books of the Pentateuch and this fifth one. They do this for the flimsy reason that they claim that the effect of the exhortation given in this book did not take place until the reign of Hezekiah and Josiah. Hence it must have been written about the seventh century before Christ. This of course discredits the inspiration of this book by the Holy Spirit by casting aside references within the book itself to Moses as author, Deuteronomy 1:1; Deut. 31:9; Deut. 31:24-26. Being part of the unit, the Pentateuch, the language, style, and content reflect a common author. We appreciate the evaluation by Unger in hisIntroductory guide to the Old Testament, page 208.

The hortatory nature of Deuteronomy, its code of conquest, its character as a military law book of a pilgrim people about to enter Canaan and the general scope and spirit of the writing are eminently appropriate for the Mosaic age as we know it, and most inappropriate for any other age. Not only does the work most explicitly and emphatically claim to be Mosaic in authorship, but the words are Moses’ direct words. He is mentioned about forty times in the book, in most instances as the authoritative author of the subject matter. The first person predominates. The language unequivocally purports to come directly from Moses. If it were not written until the seventh century B.C., in the time of Manasseh or Josiah, as the critics contend, it is a most subtle case of misrepresentation and an undeniable literary forgery scarcely worthy of canonical Scripture and, in the writer’s opinion, utterly incompatible with the revealed truth of the inspiration of Scripture.

There is a difference concerning the form of presentation between this book and the preaching books of the Pentateuch. Here Moses is the spokesman for God. God is not speaking directly to His people. In this sense it takes on a hortatory form, an exhortation to observe the laws which Jehovah God has given to them.

But why is this necessary? Is not God’s direct speech of greater significance than that of Moses? This is not the point; there is no question here of authority. Rather, the point is that of application. Here too, Moses is presented in his final act as the Old Testament mediator, a type of Christ. The laws of God, thundered at Sinai, cannot save. They can only condemn. Hence we noticed in the book of Leviticus that the blood of atonement constitutes the heart of that law. The moral law comes dressed in the ceremonies of the old dispensation. The people cannot keep the law (proven in the book of Numbers). Hence, salvation and hope is in Jesus Christ, of which Moses is the type. All above twenty years of age and older died in the wilderness. A new generation arose and are about to enter the land of Canaan. Here Moses summarizes for them the law, and exhorts them to apply that law to their hearts and lives. This too, must be done, not out of compulsion, but gratitude. The threats of judgment cannot save; only the sweet aroma of the blood of the lamb covers sins. Such a covering causes joy of heart, and what better way to show that thankfulness to God than to take His law in their hearts. This is the spiritual idea of Deuteronomy.

In this sense we can relate this to our Heidelberg Catechism. Interestingly, the law is mentioned in the first part, the knowledge of our sins, yet it is not expounded there. We receive the treatment of the law in the third part of the catechism. We follow in this catechism the example set forth here by the Spirit Who guided Moses to write this book. E.J. Young, quotes Keil in his An introduction to the Old Testament. The content of Deuteronomy is to be regarded as “a hortatory description, explanation, and enforcement of the most essential contents of the covenant revelation and the covenant laws, with emphatic prominence given to the spiritual principle of the law and its fulfillment, and with a further development of the ecclesiastical, judicial, political, and civil organization, which was intended as a permanent foundation for the life and well-being of the people in the land of Canaan.”

Ultimately, we join Israel of old, as they enter into the land of Canaan, thanking God that the keeping of the law brings great delight. Just as Moses had to yield to the real Mediator, he could not bring them within the land, for he had struck the rock; so Israel and we cannot enter into that land, but by following our Lord Jesus Christ. In Him, the law and its demands are met, and in Him the law is written within our hearts. Little wonder then, that our Savior quoted from this book in answer to the tempter, Deut. 8:3, 6:16, 6:13, 10:20quoted in Matt. 4:1-11 and Luke 4:1-13. It is the essence of our spiritual calling.

Finally, we can also observe that this final book of the Pentateuch is prophetic. Moses must step aside for the real Mediator. A farewell address is recorded which contains promises for the future which reach all the way to our Lord Jesus Christ. Besides this, the law constitutes the foundation for the prophets. Our Lord Jesus summarized the law in the well-known words of Matt. 22, “Thou shalt love the Lord thy God with all thy heart, with all thy soul, and with all thy mind. This is the first and great commandment. The second is like unto it, thou shalt love thy neighbor as thyself. On these two commandments hang all the law and the prophets.” Note the law and the prophets go together. The word which the prophets were about to bring to Israel were sounded forth upon the foundation of the law. Law and gospel are inseparably connected.

1. The introduction (Deut. 1:1-5). Moses is identified as the spokesman who brings these words to the people. They are still on the wilderness side of the Jordan, about to enter (Deut. 1:1). What is a normal eleven-day journey took them forty years to accomplish (Deut. 1:2, 3). Moses now sets forth the laws which God gave them. Sihon and Og have been slain and they are about to enter the land (Deut. 1:4, 5).

2. Moses’ first discourse to the people (Deut. 1:6-4:43). He reviews before the people the journey they took from Sinai to Kadesh Barnea, and reminds them how God instructed them to make this journey (Deut. 1:6-8), how judges were placed over them because of their great number (Deut. 1:9-18) when they came to Kadesh. Moses instructed them to possess the land, but the people insisted upon first searching out the land and this resulted in the people refusing to go up. Instead they murmured. Moses reminded them of Jehovah’s faithfulness in Egypt, but this was to no avail. God was wroth with them and declared that only Joshua and Caleb would enter the land. All the rest would die in the wilderness. Upon repenting, they insisted that they would go up to fight in the land of Canaan, but God warned them that He would not go with them. The Amorites chased them as if they were bees. They wept, but God did not hear them; they stayed at Kadesh for many days, heavy of heart (Deut. 1:19-46). 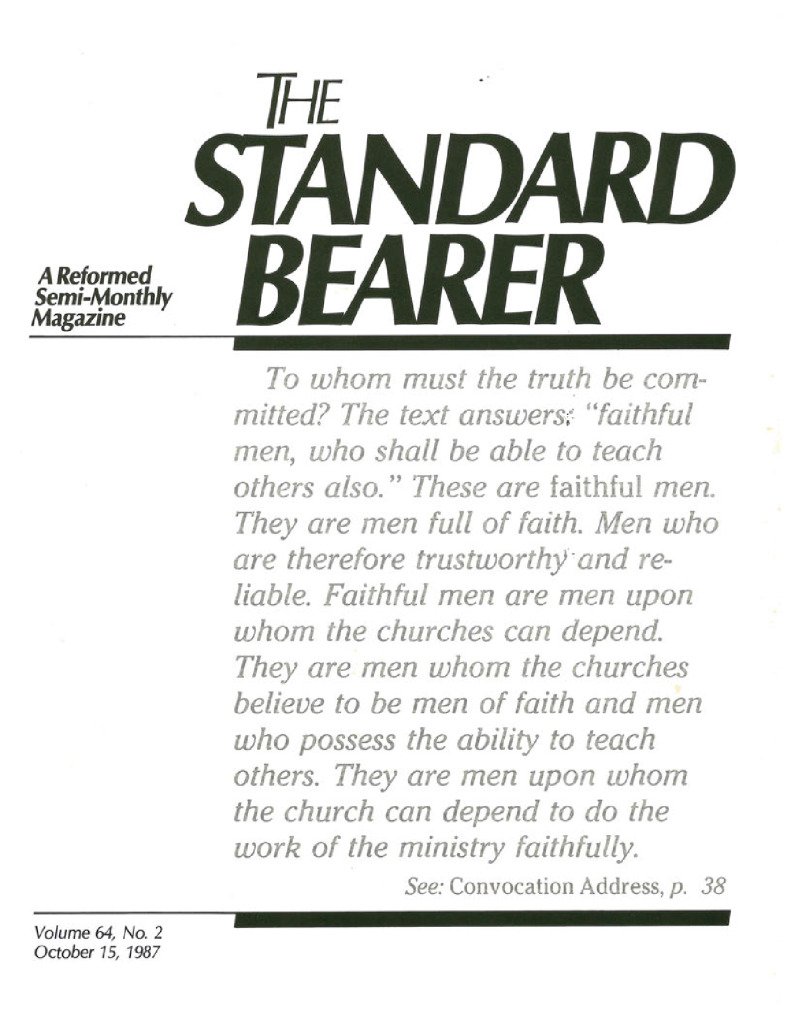