Descartes and the Philosophy of Doubt

In our consideration of the modern assault upon the Reformed doctrine of Scripture we turn again to a discussion of modern philosophy out of which that assault arises after the Reformation. The rise of modern scientific study issuing from the Renaissance called into question the existing understanding of man and the world. It did so on the basis of human reason and an investigation of creation. Principally this approach had from the very outset no room for divine revelation concerning the creation. The underpinnings of modern science, that creation can be explained from itself by the mind of man, were already present. This philosophy which underlay the spirit of the Renaissance had yet to receive, however, a full systematic treatment. Just as the early New Testament church began with faith in God and His Word and developed in its doctrinal understanding, so also unbelief begins in unbelief and not with a full blown system of philosophy formally spelled out. Modern science was no different.

Study and investigation however, soon led to questions concerning the principles, basis and proper methods of study which are to be followed to arrive at accurate conclusions. The result is the development of philosophy. In the period arising out of the Renaissance it was particularly to the science of mathematics that man turned as a tool for the study of the creation. By it he sought to develop the principles and formulas which would explain the phenomena he observed in the creation, so-called natural laws, which are more properly termed the regular workings of God’s providence in the creation.

It is with a view to this mathematical model that the first principles of modern scientific investigation were put forth. It was out of it that the method of inductive reasoning and scientific experimentation also arose as it was set forth by Francis Bacon in England (1561-1626). Such an approach is by its very nature suited only to that’ which can be touched, seen, measured, and handled. If the idea, however, is applied to the whole of the creation and every thing in it, also to the life of man, his thinking and willing, the necessary result is that one must regard man and all that belongs to him as the mere result of the operation of certain natural laws. That is, that our thinking, willing, and actions are merely processes of the creation not different essentially from the laws of motion or gravity.

Following this theory everything can be understood in terms of mathematical principles and formulas, or be reduced to mere cause and effect relationships. These relationships themselves can be discerned and developed by means of logical and systematic reasoning and analysis. Man by his reason can then explain everything, because everything is merely the result of some natural process. Good and evil have no real meaning but are reduced to that which in its effect is either pleasant or unpleasant. This theory was put forward by the English philosopher, Thomas Hobbes (1588-1650). While it was radical in its day it is one which continues with us in one form or another and underlies much of modern unbelieving thought. It basically regards man as a mere machine in the creation which itself runs as a machine. Man is simply the product of his biology, his environment, or the interaction of things round about him and within him.

It is not surprising therefore that Hobbes also had no use for religion. He treats the origin of religion as a natural response of man, primitive and unscientific man, caused by his fear of that which he cannot explain, and he lays the origin of miracles also at the same doorstep. Hobbes’ philosophy rules out the existence of God, of revelation, and of miracles or anything outside the creature from the very outset. It is the philosophy of the atheistic fool who says outright that which he says in his heart, that there is no God. It stands in direct and open opposition to the Christian faith. Exactly because it does so, however, and rules out God’s existence as a first principle, it does not constitute the same kind of threat to the Christian faith that a Jehovah-Baa1 hybrid does.

It is with Rene’ Descartes (1596-1650) that we find the first real form of modern synthesis between philosophy and religion. Descartes was considered one of the leading intellectuals of his day. A son of the lesser French nobility, a Roman Catholic by profession, he was a widely traveled man, who followed in the train of the numerous armies of Europe until he tired of military camp life and settled in Paris. In 1628 he left Paris for Holland where there was room for greater intellectual freedom. He was in appearance slight but well built, though tending to have a weak constitution. He had a large head, a pale complexion, a large nose and a wart on his cheek. He was bald and usually wore a wig, being somewhat particular about his dress. He was a studious person, well versed in the emerging science of his age, with a gifted mind, a cultured unbeliever moving in the intellectual circles of Holland. His influence was felt not only in Holland but across Europe.

Descartes in some respects went beyond Hobbes in his application of the new scientific principles and in an attempt to develop a systematic approach to the new learning. As the new science called into doubt the accepted understanding of the world and re-examined it, so Descartes lifts up that principle of doubt or unbelief to a first principle in his thinking. He begins by doubting the existence and certainty of everything, not only of God but of the creation also. The experience of the material world of time and space may itself be a dream or an illusion. It also is therefore to be doubted. This is unbelief in its purest form carried to the point of the absurd. Upon that principle of absolute doubt, doubt concerning everything that can be doubted he wanted so to build as to arrive at certainty and truth. He begins with the idea that whether his experience is a dream or an illusion it nevertheless is there, he experiences it. Whether dream or illusion his experience is real and therefore he is real and exists. This principle he sets forth as a conclusion “I think therefore I am” (cogito ergo sum). In so doing Descartes starts with himself, his thinking, hisexperience as the standard by which to judge the reality and certainty of anything else. In effect Descartes makes himself his own god in his understanding. It is on this principle that he builds his philosophy. That does not mean, however, that Descartes denies the existence of a divine being. Taking up his principle, “I think therefore I am,” he finds in his experience that there are certain things which are given, which belong to the order and structure of his experience of that which is around him of which he himself is not the author. He concludes from it that another thinking or thinker greater than he must exist even as his own thinking exists and he exists. “I think therefore I am” leads therefore to the idea there is thinking outside of me. Therefore the thinker (god) exists as the first cause. Starting with himself he frames in his philosophy a divine being. This being is not known by revelation but by thought. He is thought as a self-existent entity.

Now there are a great number of things which could be said about this philosophy, but certain elements are of primary importance. The basic starting point is not God and His self-revelation but man and his thought. The god of Descartes is really an image made in the likeness of man’s thought and experience. It has nothing to do with the God of the Scriptures. Descartes is engaged in a sophisticated form of idolatry and of making a graven image in his own imagination. That which starts in unbelieving doubt can never rise to truth and certainty because it denies from the outset the only basis of the knowledge of God, God’s revelation of Himself to us. That which begins with the lie ends with the lie. Descartes’ god is really nothing more than an idealized form of human reason, dependent upon man’s mind and experience for existence, being and content. The danger of this philosophical god who is not God is that like Baa1 it stands over against Jehovah. And the idolater may now speak with the appearance of Christian terminology of God’s existence when he means god’s existence to the subversion of the church, God’s Word, and sound doctrine. The real danger exists of a Jehovah- Baa1 hybrid entering the church. This in reality is what has happened and is happening also in our day, though in more sophisticated forms than Descartes. 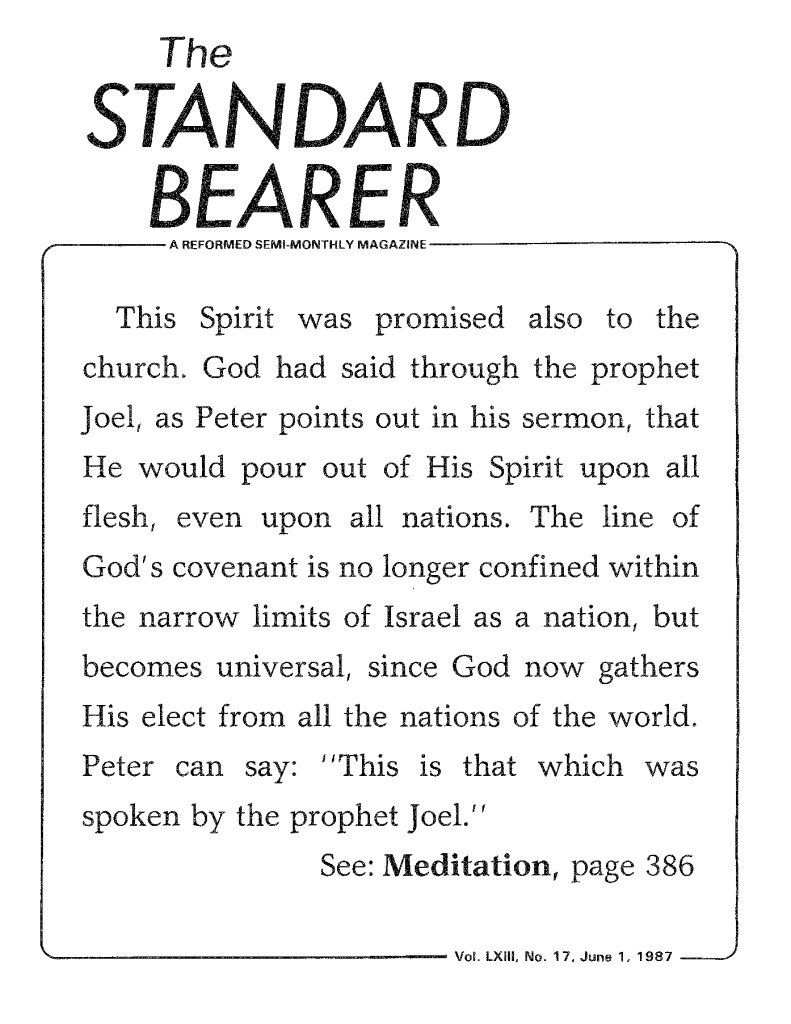