Deckers and Hankos Feted. The Approach to Covenant Children.

Deckers and Hankos Feted. The Approach to Covenant Children.

On the evening of October 5, 1990, the Theological School Committee of the Protestant Reformed Churches observed significant anniversaries in the lives of Professor Herman C. Hanko and of Professor Robert D. Decker. This year marks Professor Hanko’s 35th year and Professor Decker’s 25th year in the ministry of the gospel.

Professor Hanko was ordained into the gospel ministry in 1955 in Hope PRC of Grand Rapids. He served the Hope congregation as pastor until 1963. From 1963 until 1965, he was pastor of the Doon, Iowa church. Professor Hanko has served the churches as professor of theology in the PR Seminary for 25 years, since 1965.

Professor Decker was ordained into the gospel ministry in 1965. His first pastorate was the PRC of Doon, Iowa until 1969. From 1969 until 1973, he served as pastor of the PRC of South Holland, Illinois. Professor Decker has served the churches as professor of theology in the PR Seminary for 17 years, since 1973.

After a dinner in a local restaurant, the members of the TSC and the faculty and staff of the Seminary, with their wives, gathered at First PRC of Grand Rapids for a program in honor of Professor and Mrs. Decker and Professor and Mrs. Hanko. The group praised God in the singing of Psalms and in prayer for His goodness in blessing His church with these ministers of the Word and their wives. They heard taped reflections on the ministry of each man in his first pastorate by one who had been an elder in the church during the ministry. The warm fellowship included many expressions of heartfelt congratulation.

On behalf of the PRC, the celebrants gave thanks to the ascended Jesus Christ Who gives pastors and teachers to His church (cf. Ephesians 4:11). Just for this reason, they could recognize the gifts, labors, and faithfulness of Professors Decker and Hanko.

May Christ continue to bless the work of our two brothers, making it fruitful for the welfare of the PRC and the church universal.

The Approach to Covenant Children

In the letters column of this issue of The Standard Bearer, Dr. J. R. Beeke and Elder J. W. Beeke of the Netherlands Reformed Congregations (NRC) challenge my analysis of the covenant-view of the NRC. At the same time, they sketch the covenant-conception of the NRC, pointing out how, in their judgment, the view of the NRC differs from that of the Protestant Reformed Churches.

Because the editorial to which they refer appeared some time ago (May 1, 1990), I quote the pertinent section:

But what then does the Reformed faith mean by the inclusion of the children of believers in the covenant of God?

There are three possible explanations of the inclusion of children in the covenant. All are proposed by various Reformed churches.

The first explanation is that because of their privileged position in a Christian home and in the environment of the church these children are more likely to be converted than the children of unbelievers. In fact, the children are unsaved, and must be regarded as unsaved until such time as they give evidence of faith, but they are in a better position to be saved than other children. This was the view of some Puritans and of Jonathan Edwards. It is the view of certain Reformed churches today, including the Free Reformed Churches of North America and the Netherlands Reformed Congregations of the United States and Canada.

As Dr. and Elder Beeke point out, there is agreement between the NRC and the PRC in teaching that God establishes the covenant of grace with the elect alone. One of the theologians of the NRC, Rev. G.H. Kersten, sharply criticizes the covenant-view of “Heyns…Schilder, and many Christian Reformed ministers: “The reason for this criticism is that these men teach that all the natural children of believing parents are in the covenant. In this connection, Kersten denies that the covenant is conditional. He does not like to speak of faith and repentance as conditions, even if it is added that the conditions are fulfilled for Christ’s sake. ‘Without any condition, out of mere grace, He applies salvation to His people when He establishes the covenant with them….A conditional covenant of grace is actually a covenant of works” (G. H. Kersten, Reformed Dogmatics, Vol. I, pp. 233-258).

Agreement that God establishes the covenant of grace unconditionally with the elect alone does not, however, rule out the possibility of serious difference between the churches in the matter of the inclusion of the children in the covenant. All Reformed churches confess that the children of believers are “in the covenant.” This is the basis of their baptism of infants. But what do they mean by this? This was the point of comparison in my analysis of the covenant-doctrine of various Reformed churches in the editorial with which the Beekes take issue.

Specifically, what do the NRC mean by the inclusion of the children of believers in the covenant?

First, they mean that all elect children are in the covenant eternally by virtue of God’s election: “The elect are in the Covenant of Grace from eternity” (G.H. Kersten, Reformed Dogmatics, Vol. I, p. 244).

This is how J. W. Beeke explains the inclusion of children in the covenant in his book, Bible Doctrine for Teens and Young Adults, Book I (Eerdmans, 1987):

Scripture forbids us from viewing or speaking of anyone as being saved, one of the elect, or in the essence of the Covenant until he has personally experienced something of the inward-working graces and evidenced something of the outward-working fruits. Therefore, a clear distinction, a line of separation must be drawn in church between those who are only outwardly related to the covenant through baptism and those who are placed in the covenant in an inward manner through personal regeneration and conversion to God (pp. 364, 365).

As Mr. Beeke does not hesitate to state, this means that all the little children are, and must be viewed as, unsaved (p. 361).

This view of the children determines the approach that the church and the parents (and Christian schoolteachers) take toward the children in the rearing of them. The approach is not, and cannot be, that the young members of the covenant, possessed of covenant life by the Spirit of Christ, are trained to develop in that life—the life of daily conversion, of thankful obedience, and of prayer to their loving Father in Jesus. Rather, little, lost sinners under the wrath of God are taught to regard themselves as little, lost sinners under the wrath of God and to hope that someday they may be born again into the covenant family of God. The church’s aim with the covenant children is not nurture, but conversion—the more-or-less dramatic and even instantaneous turning to God for the first time that the church also seeks in the heathen on the mission field.

Strangely enough for a church that confesses the total depravity of the unregenerated sinner, the NRC also urge the children, unsaved sinners all, to pray for their regeneration into “a saving, eternal, unbreakable covenant relationship with (God)”: “Prayerfully seek God through the use of the means of grace that He has given you in your outward relationship with Him. Plead with Him and do not let Him go until He has confirmed the saving truths of His Word in the “experience and fruits of your life” (Bible Doctrine, p. 366). Can an unregenerated child pray? Can the unconverted desire God and seek His salvation? Is it not rather the case that pleading with God for the experience and fruits of His covenant is itself evidence and fruit that one is already in the covenant—in “the essence of the covenant”? Is not prayer the chief expression of the life of the covenant, according to the Heidelberg Catechism in Question 116?

Whatever may be their explanation of the praying of the unconverted, the NRC view their children as lost. It was with regard to their view of the actual spiritual state of the baptized children that I analyzed the teaching of the NRC on the inclusion of the children in the covenant. I remain convinced that the analysis is accurate. It was in the matter of their view of, and approach toward, the children of the covenant that I distinguished the covenant-doctrine of the PRC and the NRC.

Despite the churches’ agreement as to the covenant’s being made with the elect, this difference in covenant-conception is important. For it concerns the urgent, practical matter of the parents’ rearing of their children as truly members of the covenant; of the children’s glad recognition of themselves as friends of God; and of the church’s acceptance of Christ’s little people as really members of the congregation. Indeed, the difference concerns nothing less than doing justice to the biblical teaching that our children am in the covenant, no less and no differently than we ourselves.

This is the Reformed confession: Our infants are to be baptized “since they, as well as the adult, are included in the covenant and church of God” (Heid. Cat., Q. 74). (to be continued) 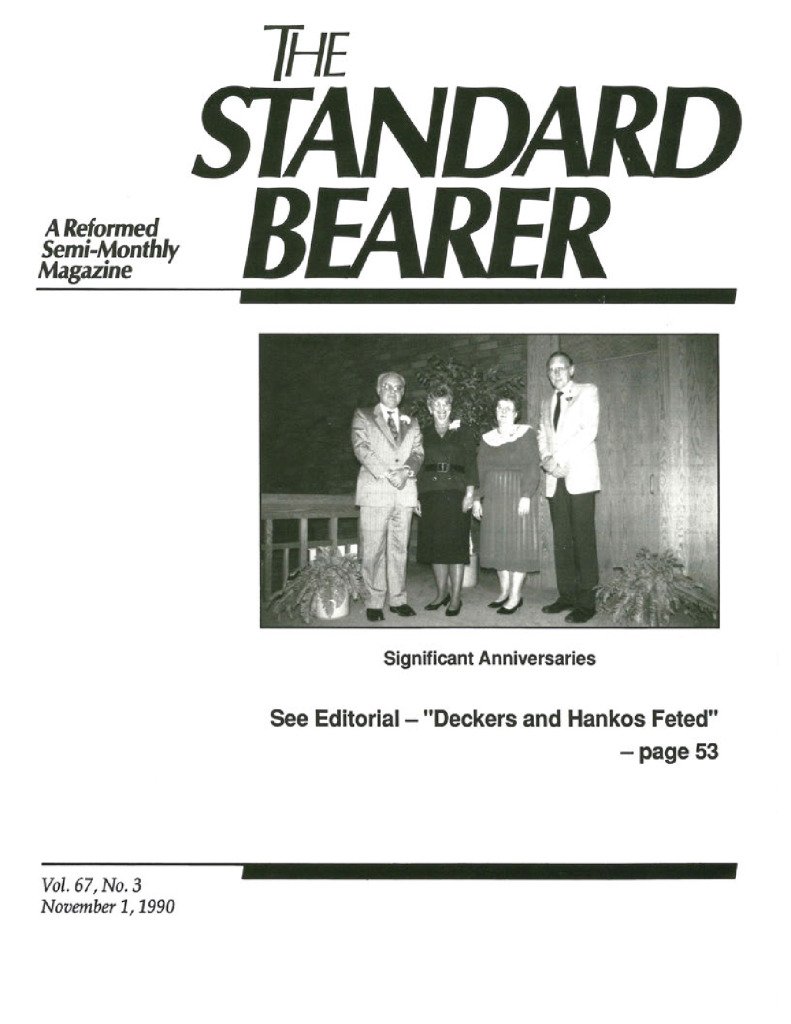