Had the negative presented his arguments orally instead of on paper, I would open this rebuttal by saying: I enjoyed listening, brother. I invariably do. There is something about the style and method of the Rev. Petter that is truly refreshing and makes him pleasant to hear and read. However, when in that same Petterian style he ends his argument with the statement, as bold as it is sweeping, “These many arguments will, I trust, elicit from all those competent to judge, the verdict that notwithstanding the unsurpassed beauty, the almost prophetic spirit, power and discernment that mark our Catechism, yet Heidelberg Catechism preaching is not preaching of the Word of God”, he is carrying his trust too far, and seriously underrating the competency of those same judges. Brother, you made the best of a difficult situation, but not enough to force us to that dismal conclusion.

To the question: What is preaching of the Heidelberg Catechism? my opponent replies, “To be honest we will have to define this as the exposition of the words of a given Lord’s Day without anticipation or retrospection, and that as words of unqualified and infallible authority”. In spite of the fact, that in doing so my honesty is called into question, I DON’T ACCEPT THIS DEFINITION of the negative. It is not true that Heidelberg Catechism preaching, in order to be what the term implies, must be defined “as the exposition of the words of a given Lord’s Day”, if thereby is meant, that we are not preaching the Catechism, unless we exposit its words as we do the words of a text from Scripture, treat this symbol as we do the Word of God itself, place this confession on a par with Holy Writ, make the Catechism as such the basis of our preaching, and exegete and analyze it as we do the Scriptures. It is easy enough to see that on such a basis preaching of the Catechism could never be preaching of the Word of God. That would be substituting the word of man for God’s Word. Exactly what is meant by the phrase “without anticipation or retrospection” in the definition of the brother is not clear to me. If it means what I think it means, I reject that part of the definition also. Perhaps, however, I’m mistaken in what I think it means; nor is this phrase pertinent to our discussion. I certainly disagree with my opponent, when he states, that Heidelberg Catechism preaching is only what the phrase implies, when it exposit the words of a given Lord’s Day “as words of unqualified and infallible authority.” I agree, shall Catechism preaching be ministry of the Word its contents will have to be “of unqualified and infallible authority”. This it is, not because it is based on and draws its material from the infallible Word of God.

Heidelberg Catechism preaching, to me, is the official proclamation of the Word of God as expressed, exposited in this Reformed confession by the church herself. Thus understood it will be evident, that the preaching of the Catechism is very really preaching of the infallible Word of God. The former, too, is preaching by the church in the Name of Christ Himself. It, too, is the proclamation of the Mediator Himself as the center of all revelation. It, too, ministers beautifully to the spiritual needs of the church in the world, opens and shuts the kingdom of heaven, feeds the elect kernel, instructs in the way of salvation in Christ, admonishes and exhorts and increases in the grace and knowledge of Jesus Christ, our Lord. Catechism is a preaching, that lets Scripture speak, that holds before the church only the “thus saith the Lord” of God’s own Word, that leads always and only to Holy Writ as our only rule of faith and conduct, and that regards the Catechism itself as a mere echo of the Scriptures, an empty vessel that receives every drop of its contents from the living Word of God.

Against the proposition, that Heidelberg Catechism preaching is ministry of the Word the negative raises a series of objections, the first three of which are named “damaging presumptions” and the last four of which are said to be “still more damaging to an unqualified trustworthiness of the Catechism.” Let us see how damaging these presumptions really are.

“Presumption’’ No. 1 complains, that the Heidelberg Catechism is principally the work of one man. History shows clearly, says the negative, that regardless of the persons, the faculty, the councilors, and others that are mentioned as advisors, the work grew from the heart and mind of one man—Ursinus. Nor, “presumption” No. 2 continues, did either the annual Synod of 1563 or the great Synod of Dordt revise or recast the Catechism to any marked decree. In fact, the negative doubts that the great Synod, that exalted the Catechism to the dignity of a Reformed confession, made a careful study of the work as a whole, and he strongly suspects that the loud approval of said Synod was not with a view to the work as a whole but had in mind “a certain favorite portion or even a favored person or small group”. Thus the one-man authorship of the work remains sustained, and the Rev. Petter feels that “what one man with his personal bias, his own peculiar spiritual experiences and his own peculiar bent of mind, has produced cannot be a balanced and full reproduction of the Gospel.” To all of this I beg to reply: 1/ What of it? That Ursinus was the chief author of the catechism cannot constitute an objection. The majority of the Church’s great documents grew from the heart and mind of one man. 2/ The negative does not and cannot tell just how much all these other persons contributed toward the composition of the Catechism and thus prevented it from being wholly molded by the personal bias and peculiar bent of mind of one man. 3/ the fact, that neither of the above mentioned Synods revised or recast the Catechism is nothing to bemoan. The simple conclusion is, that the church of God did not feel the need of changing this great work. 4/ The Rev. Petter does not tell us nor does he know just how carefully the Synod of Dordt studied the Catechism before approving it, and certainly he does not and cannot prove that the fathers acclaimed this work so loudly because of reasons that were personal and incidental. Fact is, that the Catechism was read from beginning to end in the full gathering and that it was enthusiastically approved as excellent from the pedagogical point of view and Scripturally sound. Besides, by the time this Synod convened the Catechism was already 60 years old. Our learned fathers knew this work from A to Z, so well, no doubt, by 1618, 19 that they felt no need at this time of much study and debate. 5/ The negative should have proved that the catechism bears the stamp of the “personal bias, the peculiar spiritual experiences and peculiar bent of mind” of one man. One who carefully studies and regularly preaches the Catechism does not discover this fault at all. Our competent judges, brother, demand evidence for such sweeping assertions. Your failure and obvious inability to adduce such evidence destroys the entire argument. 6/ We do not love and preach the Catechism as the work of one man, nor even as the creed of the Reformed Churches, but for the sake of the truth it contains and proclaims. Regardless of authorship, the Catechism stands on its own merits. Tested, preached, criticized and analyzed for more than 300 years, the Catechism is its own defense, and stronger than ever is the conviction of the Reformed Christian that its preaching provides God’s church with a well-balanced diet. All one sees when one studies the Catechism is not one man, not a group of men, not a church, but the living Word of God.

“Presumption” No. 3 objects, again without a shred of evidence, that from the viewpoint of its practical application it was written with a view to 16th century life and problems. I beg to answer: 1/ THE CATECHISM STANDS ON ITS OWN MERITS. What is there in the entire symbol that does not apply directly and beautifully to our own lives and problems. 2/ The spiritual needs and problems of God’s people remain essentially the same. The misery of man has not changed since the Catechism was composed, neither have redemption or gratitude. The Apostolicum, the Law and the Lord’s Prayer are still the same in meaning and application. 3/ The negative should have produced evidence for his contention. He calls this a “damaging presumption,” but wisely refrains from attempting to show wherein the Catechism fails to meet our present spiritual needs. His failure and inability to adduce proof destroys this argument, too. 4/ The one thing, that could perhaps be mentioned in support of this objection is the extra emphasis on the sacraments. However, it may be said, that also here the Catechism is strictly Scriptural in contents, and that all it teaches about the sacraments applies to us today as well as it did to God’s people of the 16th century.

The remainder of the arguments presented by the negative concern themselves with the so-called weaknesses and errors to be found in the Catechism. To these I wish to reply: 1/ The viewpoint of Lord’s Day 1 is not Anthropocentric (man-centered). Also this statement is unaccompanied by one iota of proof. The negative simply says, “It is well-known”. Perhaps, but “those competent to judge” demand proof. Read Lord’s Day 1 and the entire Catechism and it will be clear as crystal that our confession does not make man the center and end of all things. The mere fact that the Catechism considers and explains the truth from the viewpoint of the consciousness and subjective experience of the Christian, from the aspect of faith and comfort, does not warrant the accusation that is is not theocentric, but anthropocentric in character. 2/ The Rev. Petter seems determined to prove that Heidelberg Catechism preaching is not preaching of the Word. We grant this at once. There are weaknesses in the Catechism. Answer 41 is weak and void, although the negative will find it quite impossible to find another answer like it. There is here and there a lack of due proportion. And this goes to prove, that the Catechism as such is the work of mere man. For that reason we must and do not preach the confession as such. We proclaim, when we preach the Heidelberg Catechism the Word of God as it is reflected, confessed, exposited in this Reformed creed, and he who does so does not bring the word of man, but preaches the Word of the living God.

That, I’m sure, will be the verdict of “those competent to judge”. 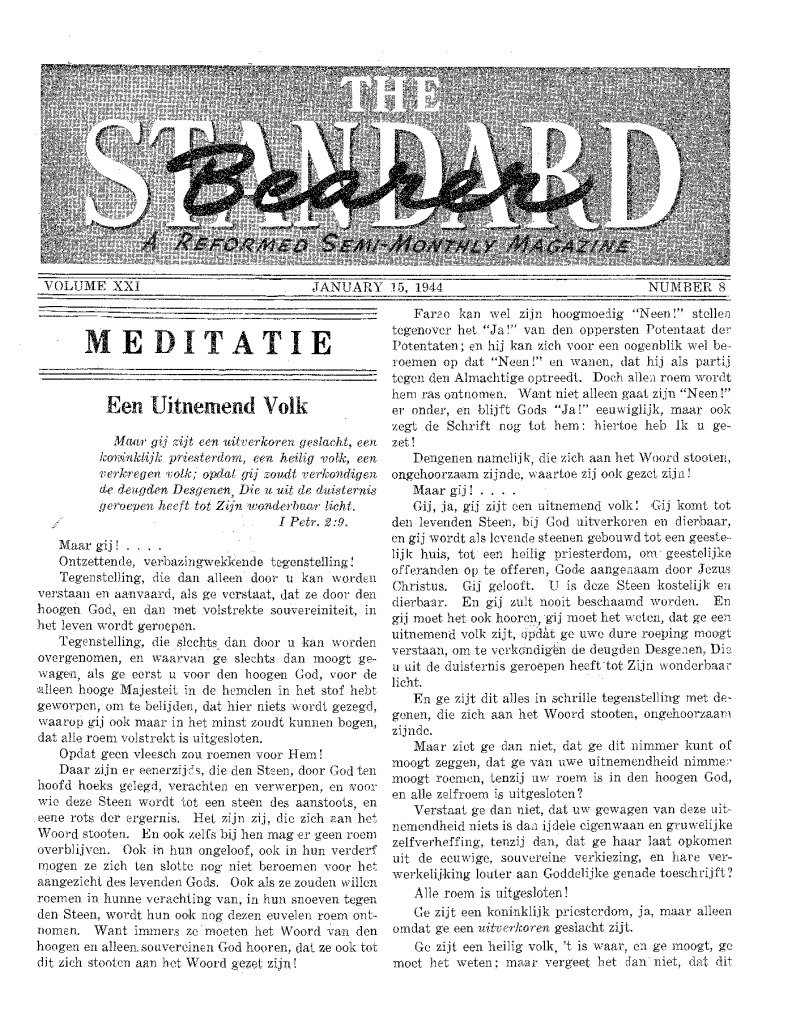