Supervision by the Ministers

The 40th Article of our Church Order makes provision for regular and periodic meetings of the deacons. It also stipulates that these meetings, wherein the business of the deacons is to be transacted, shall be attended with “the calling upon the Name of God.” To these provisions is added the words “whereunto the ministers shall take good heed and if necessary they shall be present.”

The question first of all arises as to what is the antecedent of the word “whereunto” in this phrase. Does it refer to the “calling on the name of God” so that the meaning is that it shall be the task of the minister to see to it that this is done at all meetings? This can hardly be the case since the article does not require the minister’s presence at the meetings and unless that was also made mandatory it would be quite impossible for him to see to it that all the meetings were opened and closed with prayer.

Does this phrase perhaps then refer to the meetings of the deacons as such so that the idea is that the ministers must take heed to see that the deacons meet regularly and if necessary every week? We hardly think so because this sort of supervision would belong to the office of the elder rather than that of the minister of the Word. As a matter of good order it would be the elder’s prerogative to see to it that regular meetings are conducted and in which the work of the deacons is executed. The deacons are under the supervision of the Consistory and not of the minister alone.

It appears, therefore, that the most likely application of the phrase “whereunto the ministers shall take good heed and if necessary they shall be present” is that it refers to the matter mentioned in the earlier part of the article and in which it is stated that the deacons shall meet “to transact the business pertaining to their office.” The idea then is that the ministers must see to it that the deacons on the one hand do not engage in any labors that do not belong to their specific office, and, on the other hand, that they do perform the tasks pertinent to their office and in particular the spiritual function of that office. This the ministers of the Word could do even though they are not present at the deacons’ meetings since Article 25 requires that the deacons render an account of their labors to the Consistory. From this report the minister as well as the consistory could determine whether there is neglect of duty and if so the minister must take heed that it is corrected and, if necessary, even attend the deacons’ meetings. Moreover this would also harmonize with Article 16 of the Church Order where, among other things, the duty of the office of the minister is stated to be that he is “to watch over his brethren, the elders and deacons.” Certainly this provision refers to a supervision of ecclesiastical duties.

Now it may appear a bit strange that this duty is ascribed to the ministers rather than to the elders. Has not the government and supervision of the church been entrusted to the elders? And in our churches do we not have the established custom according to which one of our elders visits the meetings of the deacons in turn? Is not this supervision adequate? Why then does this article stipulate “ministers” instead of “elders“?

In attempting to answer this question we should note firstly that there is no real conflict between our present practice and the ruling of this article. The article, as we have seen, does not require the minister’s presence at these meetings but the presence of the elders or a representation of the elders it would seem is mandatory because the work of supervision is entrusted specifically to them. In the second place, when the minister functions according to the prescription of this article, he functions in the capacity of an elder . . . a teaching elder. And that, in the third place, would seem to indicate why he is specifically mentioned in this article. The deacons may need and desire advice and instruction with regard to the proper functioning of their office. The minister is undoubtedly best qualified to give this. The deacons may want to consult him periodically with regard to their duties. The minister must then make himself available and offer the necessary assistance in order that the office of deacon may be in proper function. The minister, by virtue of his special training, is best qualified for this task. However, it must also be observed that the minister does not have to wait for an invitation to attend the meetings of the deacons. He may certainly present himself at any of these meetings, only his prerogative then is not to preside or lord it over the diaconate but he should retain the status of a visitor and advisor. Where all the Church Order provides what I will call “administrative supervision” over the diaconate by the elders, this article provides “‘pedagogical supervision” by the ministers of the Word.

“The Classical meetings shall consist of neighboring churches that respectively delegate, with proper credentials, a minister and an elder to meet at such time and place as was determined by the previous classical meeting. Such meetings shall be held at least once in three months, unless great distances render this inadvisable. In these meetings the ministers shall preside in rotation, or one shall be chosen to preside; however, the same minister shall not be chosen twice in succession.

“Furthermore, the president shall, among other things, put the following questions to the delegates of each church:

1. Are the Consistory meetings held in your church?

3. Are the poor and the Christian schools cared for?

4. Do you need the judgment and help of the classis for the proper government of your church?

In this article and several that follow in the Church Order various matters relating to the Classis are treated. The Classis is one of the four kinds of ecclesiastical assemblies mentioned in Article 29. It is one of the major or broader assemblies of the church.

Organization of the Classis

This article dates back to 1581 when the Synod of Middelburg combined a number of previous rulings for Classical gatherings into the present form. Prior to this time there were several Classes in the Reformed Churches but they were not too well organized. As early as 1568 the Wezelian Convention had urged that Classes be organized as soon as the conditions of war and persecution permitted. And in 1571 the Synod of Emden drew up a set of rules governing Classical organization but the disorganized state of affairs is reflected in the decision of the Synod of Gelderland in 1582 which expressed “that it is neither advisable nor edifying, that a few churches should continue to exist, by themselves, but each church is bound to join itself to a Classis.” Of course no church should or could be coerced to join itself to the federation of churches but virtually all Reformers, including Dr. Bouwman, are agreed that it was and is the moral duty of each church to do so. Dr. Bouwman advanced four reasons for the necessity of Classical organization and to these others could likely be added. He held this to be essential : “( 1) because of the unity of the churches in Christ ; (2) because the churches need each other for their continuance, extension, and purity in faith and conduct; (3) because the liberty of the congregation must be maintained and classical organization will be a safeguard against domineering and arbitrary office-bearers; (4) in order that all things may be regulated in the church according to the Word of God, and order and discipline may be maintained in the congregation.” It would appear evident that the advantages and benefits of classical organization far outweigh the few minor objections that might be lodged against it.

Delegation to the Classis

According to the provisions of this article, the Classis shall consist of an elder and minister delegate from each church. These men, with proper credentials, are authorized to deliberate and decide upon all matters that are legally brought before the body. The Classis, so constituted, is, however, more than a deliberative body. By mutual agreement the churches represented in the Classis will either respect and keep the decisions made by the Classis or, as the Church Order provides in other places, appeal any disagreeable decision to the Synod.

The Christian Reformed proposed revision of the Church Order makes a slight change in the provisions for delegation to the Classis. The revision would read:“Each church within the Classis shall delegate a minister with proper credentials. If a church is vacant or the minister is prevented from attending, two elders shall be delegated” (Art. 37). From this, as well as from the original reading, it seems that emphasis must be laid upon the fact that “the elders” constitute the proper delegation to Classis. Deacons are not to be delegated. This has not always been observed and in some cases it is very possible that a consistory has no alternative other than sending a deacon as delegate or lack a full representation at the Classis. For example let us take a consistory that is very small and consists of’ only two elders. It happens that the church is without a minister and at the time of the Classis one of its elders is sick and unable to attend. It would under such circumstances not be wrong to delegate one of the deacons. In such cases the deacons are already added to the consistory under the provisions of Article 37 and serve in the capacity of advisory-elders anyway. However, we do feel that wherever possible the delegation to Classis should consist of elders and the appointment of deacons to this function should not be used as a convenient substitute for elders who may be able but unwilling to fulfill their obligations and office. As an emergency measure only it may be permissible.

The manner in which the delegates to Classis are to be appointed or chosen must be left to the choice of individual consistories. The usual method is to delegate by rotation. Either the elders are listed alphabetically or according to their tenure of office and in that order they take turns attending the classes. It is also conceivable that the consistory votes delegates each time but if this method is followed there should be an understanding that the same elder is not delegated twice in succession. All the elders should share in this work even though it may be granted that there may be some elders who are more particularly qualified for it even as there may be other elders who are more fitted for other particular work in the congregation. However, coping with problems of the church on a denominational level and familiarizing one’s self with ecclesiastical procedures on the broader level is a profitable experience for all the elders and none should be barred from participation. It is even good for the Classis to have this change in personnel. It is a preventive and somewhat a safeguard against certain dangers and evils that may otherwise quite easily creep into the church. 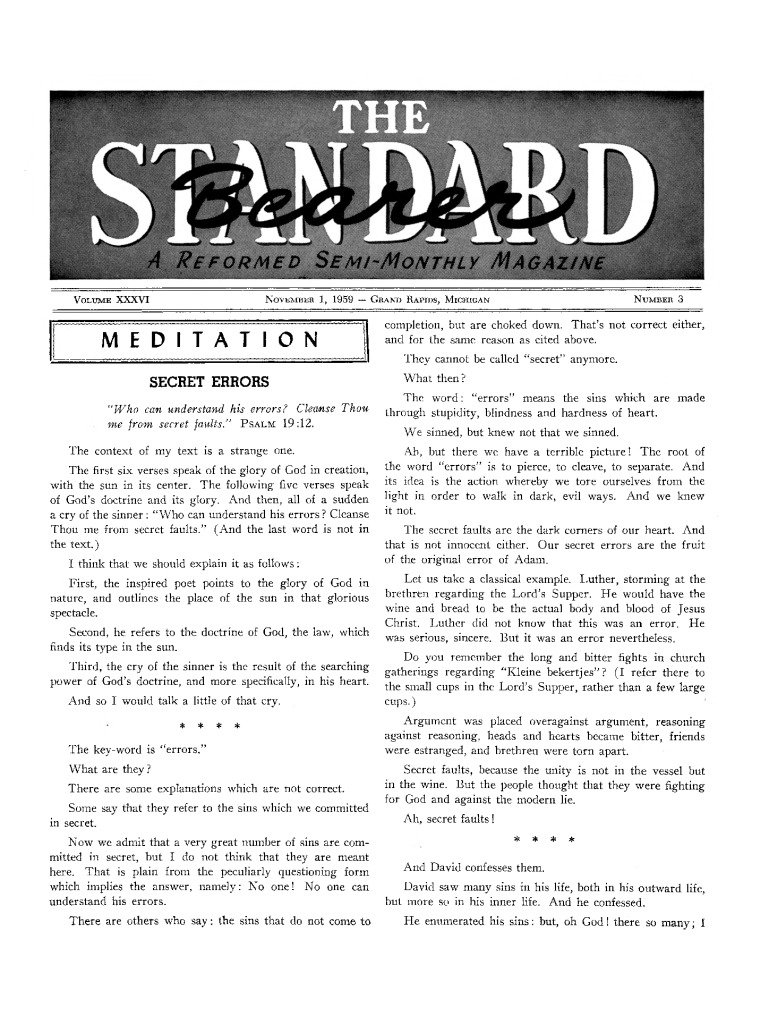