Throughout history God raised up men and women who were willing to forsake all personal comfort for the promotion of the gospel. The sacrifices and suffering to which these men and women willingly subjected themselves for the sake of the gospel cause me to blush with shame. As a modern-day missionary in the United States, I have every creature comfort imaginable and am required to make few physical sacrifices for myself and my family. But such was not always the case. God raised up David Brainerd in the 1700s to preach to the American Indians. Although Brainerd’s missionary career lasted a mere four years, and he died at the young age of 29, his selfless devotion to Christ is an inspiration to us today.

By the early 1700s there were many thriving towns in America along the Atlantic coast and inland along the waterways. But outside of these tamed areas there were miles of wilderness that were occupied only by American Indians who were steeped in paganism and superstition. As immigrants landed on the shores of America, one would have expected there to have been more interaction with these natives. There were some who sought to be a spiritual influence for good to these natives, but the main influence was negative. John Thornbury writes: “Most of the ‘Christian’ Englishmen, with whom they came into contact, taught them to shoot instead of read, and drink instead of pray. Far from instilling in their minds the principles of Christian honesty, they cheated them out of their furs and ornaments, and instead of teaching them to love their fellow men, they drove them like beasts from their homelands.”¹

Brainerd was not the first to establish a work among the American Indians. Already in 1631 a certain John Elliot immigrated to America from England and devoted his life to ministry among the Indians. Elliot spent over fifty years translating the Bible into the Mohican dialect, translating theological works into their language, as well as preparing an English grammar for them. Before Elliot died in 1690 there was a considerable community of believers among the natives. Brainerd, however, was one of the first to go into the wilderness and try to live with the Indians.

David’s father passed away when David was only eight years old, and about five years later his mother died, leaving him an orphan by the time he was fourteen years old. After living with friends, David, at the age of nineteen, moved back to farm the family land in Durham, Connecticut, but shortly thereafter decided to pursue an education at Yale. During his teen years David was a serious-minded young man who was deeply concerned about his own sin and spent much time reading the Bible and praying.

During this time of his life Brainerd struggled with especially three doctrines—the strictness of the law, faith alone as the condition to salvation, and the sovereignty of God. By the summer of 1739, after considerable prayer, fasting, and study, Brainerd was brought to confess the absolute sovereignty of God; his own inability to keep God’s commandments; and the awareness that all his attempts to merit the favor of God by religious experience or exercises were completely worthless. The great doctrines of grace became the source of great joy and delight to him. Now he desired to promote the unspeakable glory of his Redeemer.

Brainerd was caught up in the extraordinary religious upheaval that shook New England in the 1730s and 40s under the ministry of Jonathan Edwards and George Whitefield. Yale opposed the special meetings being held, but Brainerd attended them, in part leading to his being expelled from Yale. Brainerd later apologized to the authorities for his actions. But God had a purpose in directing Brainerd’s thoughts to the Indian tribes scattered around his homeland and in the vast areas to the west.

In the summer of 1742 David was examined and licensed to preach. As he began to preach in the churches, he made known his interest in working among the Indians. About the same time, the Society in Scotland for the Propagation of Christian Knowledge started working on behalf of the American Indians. Local men in New York and New Jersey were appointed to oversee the work, and funds were given for two missionaries. Azariah Horton was first called to the work, and then Brainerd was commissioned to begin work among the non-evangelized Indians living in Kaunaumeek, New York. After a long, difficult horse ride, he came to the first group of Indians and began preaching to them on April 10, 1743.

Within a short time Brainerd was discouraged by the poverty, loneliness, and difficult travel, coupled with the lack of interest by the Indians. He began to pick up more and more of the language of the Indians and finally was aided by an interpreter. After a year in Kaunaumeek he had built himself a small hut to live in and was able to provide for himself and his horse. He had learned the Indian language well enough to communicate. But by the spring of 1744 things did not appear to be developing in Kaunaumeek. Brainerd decided to make a trip south to the Forks of the Delaware.

While Brainerd was making the journey to Delaware, messengers arrived from New York who wanted him to come to be their pastor. They offered him a very attractive opportunity in one of the wealthiest churches of Long Island. But Brainerd resisted this temptation to settle down in a pleasant community and labor among an appreciative people. Brainerd also met and was tempted to settle down and marry Jerusha Edwards, daughter of Jonathan Edwards. But David Brainerd believed that God wanted him to remain in the difficult life in the wilderness with the Indians.

After a year of spreading the gospel along the Forks of the Delaware, there was again little fruit on his labors. Although there were some emotional responses to his preaching, there were no converts to Christianity. He learned of some Indians living eighty-five miles south in Crossweeksung. He made the difficult trip there and from the beginning experienced a tremendous response. Interest in the preaching increased every day, until they requested him to preach twice a day to them. He labored for a few weeks, and the number of hearers continued to increase.

By the end of 1745 there were outstanding instances of the power of the gospel at Crossweeksung. “On August 25, with a considerable crowd of Indians and whites looking on, Brainerd baptized the converts. After the spectators were gone he reminded the new-born souls of the solemn obligations they were now under to live to God, and warned them of the dangerous consequences of careless behavior after a profession of faith. The evangelist was now becoming the pastor of a believing flock.”² For the next years Brainerd labored among both groups of Indians, but the traveling back and forth increasingly took its toll on him.

In June of 1746 Brainerd prepared a detailed report for his mission board that gives us an insight into what he saw were the biggest difficulties involved in mission work among the Indians. It is interesting that most of these continue to be challenges to the work of evangelism today.

Second, communication was difficult. There was no uniformity in their language and no written record. It took a long time to learn their many unrelated dialects.

Third, the filthy living, lack of manners, and laziness made it hard to preach and teach among them. Not only would their homes be smoky, cold, and filthy, but the Indians made no effort to improve things. They were poor, but had little ambition to learn a better way of life.

Finally, in addition to the difficulties caused by the nominal Christians, Brainerd found opposition from other white men to his labors. Those who hated Christianity tried to brainwash the Indians and spread lies about the missionary and his motives.

Brainerd’s health continued to fail. After many more difficult trips through the wilderness fighting sickness and coughing up blood, Brainerd was taken in by Jonathan Edwards and nursed by Jerusha as he lay dying of tuberculosis. As he became weaker he expressed his earnest desire for the coming of Christ to deliver him and bring him to glory. These expressions became common in the Edwards home: “Come, Lord Jesus, come quickly. Oh, why is His chariot so long in coming!” Brainerd entered his heavenly rest on September 11, 1747. Jerusha ended up dying four months after David, from tuberculosis as well, which she had contracted during the nineteen weeks she selflessly nursed David Brainerd.

Brainerd was an outstanding example of self-sacrifice and suffering for the sake of the kingdom of God. His strength was also his fault in that he did not take care of the body that God gave him. Brainerd realized this fault at the end of his life and warned his brother who succeeded him in his mission to the Indians to take better care of himself.

Brainerd’s extensive diaries reveal a man who knew his own weaknesses, battled discouragement, and persevered through tremendous hardship. We can learn from Brainerd the need to live with the local people, to be constant in prayer, and to trust the power of the gospel alone to change the hearts and lives of the heathen. May God continue to raise up young men and women who love the truth and are willing to sacrifice for the sake of the spread of the gospel. 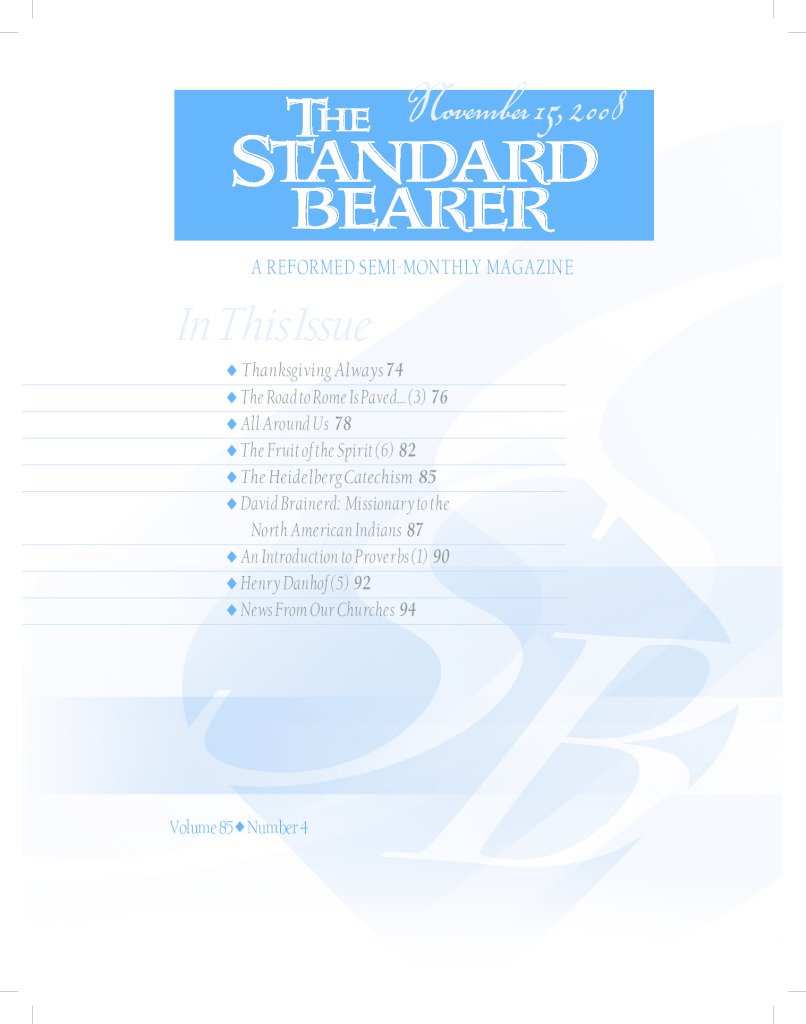