In our criticism both of the actions (of the past and of the present) of the Christian Reformed Church with respect to worldly amusements—especially the most recent one, concerning dancing—and of The Outlook’s editorial which futilely bemoans those actions, we do not wish to end on a negative note. There is something positive to be said on this subject, also something positive which needs saying and which needed saying already in 1928 and ever since.

Already in 1928 The Standard Bearer sounded this positive note at the conclusion of the article from which I have already quoted large portions. It is interesting to note, by the way, that already in 1928, though the old accusation of negativism was frequently sounded in those days, The Standard Bearer was not critical in a merely negative sense, but offered positive advice and guidance for the benefit of all Reformed believers. In this particular instance Rev. Hoeksema concluded his article about the amusement problem in the form of advice to the Christian Reformed Synod which would be considering the Report on Worldly Amusements. Some have thought this advice was tongue-in-cheek, but this was not really true. The writer was quite aware, of course, that advice offering by The Standard Bearerwould have no legal standing at the Christian Reformed Synod and that it would not even be considered. Nevertheless, he was in dead earnest as far as the contents of that advice was concerned; and he used this particular literary device in order to focus the attention sharply and concisely on the issues. If only the Christian Reformed Synod had paid attention in those days, who knows what might have been the course of events with respect to that problem of worldly amusements? Here is what Rev. Hoeksema wrote at that time (I translate):

The Standard Bearer also advises the Synod, then (the presupposition in this advice is that our first advice was already heeded and that the insidious doctrine of the Three Points was retracted) to declare:

A. In regard to the report of the Committee:

1. That it greatly appreciates the considerable labor accomplished by its committee, although it greatly regrets the fact that so much reasoning was necessary to make plain that to amuse one’s self with the world in theater and movie, in games and dance, is sin; seeing that among serious-minded children of God this is a matter of complete certainty without any reasoning-process.

2. That although the points of advice at the end of the report are better than the report itself might lead one to expect, it nevertheless cannot accept the report as a whole, but very decisively must reject it:

a. Because it cannot go along with the basic view of the Committee, which is rooted in the unscriptural and unreformed doctrine of common grace. It definitely condemns the following:

(1) God in His grace still gives amusements to the ungodly on the way to hell.

(2) And the ungodly can also enjoy himself in those amusements in a non-sinful manner.

(3) The child of God can therefore also play with and amuse himself with the children of evil in this world.

b. Because the Synod cannot go along with the Committee when it does not resolutely condemn thetheater and the movie and the dance as such. Sin may not be played. That which is holy may not be played. And leaping for joy in the Lord is something altogether different than artistic dancing.

B. With regard to the matter itself:

1. That it is the calling of the Christian to live antithetically in the midst of the world, to glorify God over against a world which lies in the Evil One. This world is no playground, but a battlefield.

a. The Christian must not go out of the world.

b. But in the world he must live from the principle of regeneration.

2. That therefore it is spiritually impossible for him to amuse himself and to play with the children of darkness, against whose sin he must testify, for this presupposes a certain basis of friendship. The friendship of the world is itself enmity against God. A child of God has no need of theater, movie, and dance. He vomits of such things.

b. To instruct Christians, to the best of their ability, night and day (for the matter is very serious), in this spiritual, antithetical principle, especially also as it is applicable to so-called “amusements.”

c. To beseech the Lord earnestly, with confession of our own guilt and unfaithfulness and laxity (for the leaders frequently give the people a bad example in the seeking of the things below) that He will be merciful to His church, open the eyes of His people, and banish from His church the influence of the ungodly.

4. It admonishes the consistories:

a. Diligently to instruct and to admonish the sheep of the flock, in order that many may come to conversion and be delivered from the power of world-conformity which shall presently corrupt the church.

b. To note those as being spiritually dead and alienated from the life of Christ who, after repeatedly being instructed and admonished, nevertheless continue to show that they have their delight in the things of the world, and to banish them from the midst of the church, in order that they give no offence.

a. That there is indeed a place in the life oft the child of God for true relaxation, spiritually and physically, although that place is very small and limited.

b. But that it is fully assured that if only we act in harmony with the above principles and the church again strives to live purely in a spiritual-antithetical manner, the place and the nature of these recreations can safely be left to everyone’s conscience. The so-called “amusements-problem” will cease to be a problem.

That was sound advice.

It was sound advice, in the first place, because it was firmly rooted in the Reformed and Scriptural principle of the antithesis. There is no conflict in this advice between the principle advocated and the practical measures advised. That, after all, was the trouble with the 1928 Report on Amusements adopted by the CRC. And, as we have stated before, principles work through. The practical measures advised, weak as they were, could not possibly be maintained and enforced from the outset—simply because they had no foundation in principle. They never “took” in the churches. At first they were somewhat feared, but clandestinely ignored and violated. Gradually these violations because more common and open. After a while they were very boldly and brazenly flouted, and the 1928 decisions were mocked and sneered at. Still later there came a movement to repeal them. And most recently—mind you, in the name of the very principle of common grace set forth already in the 1928 Report—the Synod of the Christian Reformed Church has placed its imprimatur, its stamp of approval, upon the very amusements it once condemned and warned against. It is not my purpose now so much to emphasize the wrong and the evil of the principle of common grace. What I wish to emphasize strongly is that principles work through. Principle and practice are inseparable. Correct practices which are not firmly rooted in sound principles can never survive. Ministers may negativistically harp about practical evils from the pulpit, they may even rant and rave against them; elders may do the same in family visitation or on disciplinary calls; all will be ultimately of no avail—unless there is sound, positive, Scriptural, Reformed principle at the basis. And I mean principle in which the church and the people of God are thoroughly and carefully instructed!

It was sound advice, in the second place, because it avoided the pitfall of legalism. It avoided the temptation to attempt to solve any problems by synodical decree. After all, such synodical decrees never solve anything. A synod adjourns, and it is gone. Its decrees end up in the dead file of the Acts or in the archives of classes and consistories. But it placed the responsibility squarely where it belonged: in the congregations, in the pulpit, in the catechism class, in the hands of the elders. But notice, too, that there is no mention of any troika of mortal sins, nor any attempt to lay down line upon line and precept upon precept. Not at all! Let the principle of the spiritual antithesis be taught, let the church learn to live from that principle vigorously and positively. Then the place and the nature of recreations and amusements can safely be left to the sanctified, Word-guided, conscience of the children of God. They will simply be spiritually nauseated by the corrupt amusements and entertainments of the world. You see, that is the principle of Christian liberty!

I said that this was sound advice fifty years ago.

I add: it is sound advice today!

To those who are genuinely concerned about these things in the Christian Reformed Church, I say: this is still the only sound course to follow with regard to the amusements problem. For the church as a whole, I fear it is too late. Even the very language of the antithesis has become foreign for the most part. Nevertheless, there is no other way to face and to solve the problem than that outlined above.

And to our own Protestant Reformed Churches and people, I want to stress this with all possible emphasis. Let the spiritual antithesis be preached. Let it be drummed into our covenant seed day and night, in home and church and school. This is our only salvation with regard to worldly amusements and with regard to the entire amusements question. Then, as was stated at the conclusion of the quotation above, the problem will cease to be a problem! 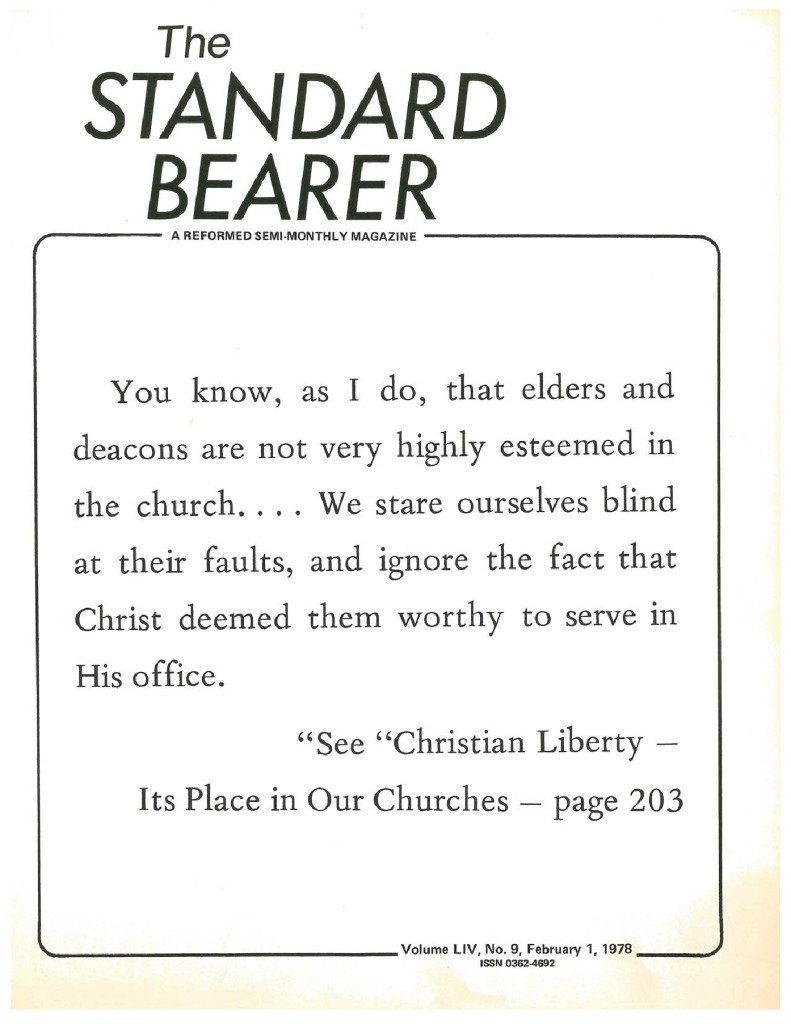