Recently the President has evoked a storm of criticism from religious leaders in the country by his statement about religious freedom in Russia. He cited the Russian constitution, article 124, which pledges freedom of religious worship and of anti-religious propaganda. Article 124 of the Russian constitution reads as follows: “In the object of ensuring to the citizens freedom of conscience, the church in the U.S.S.R. is separated from the State and the school from the church. Freedom of service of religious cults and freedom of anti-religious propaganda is acknowledged for all citizens.’’ This, said the President, resembles the rule obtaining in America, where anyone can mount a soapbox and preach religion or rail against it as he pleases.

It was, however, not only criticism that the President’s statement aroused. Many others advised the President to make this the price of Lend-Lease aid to Moscow. One of the nation’s leading Catholics welcomed the move to open up religious freedom in Russia. The White House also intimated that such was its intention and had instructed W. Averell Harriman to discuss the religious question with the Stalin government. The official statement of a Russian spokesman was a disappointment to religious leaders and government officials in our country.

Mr. Roosevelt’s statement caused us all undoubtedly to ask some questions and make some reflections about religious freedom in Russia and in the world. For it is especially from this angle that we view the present chaos. We will often ask ourselves the question, what significance has the present struggle for the cause of the Church of Jesus Christ? Though we cannot see it oftentimes, we believe that all world events, current events, take place only under the direction of Christ and only for the development of His Church.

The history of the Russian religious persecution dates back to 1917, when the Bolsheviks came into power by a revolution. They had two reasons for destroying religious worship as well as political freedom:  1. because of their belief in the teaching of

Karl Marx, who said, “religion is the opium of the people”, and 2. because they determined to destroy the political power of the church. The Communists, as is well known, almost destroyed all their foes, political as well as religious. Thousands fled the country. Their* secret police, called the Chela, was just as effective as the German Gestapo. They jailed, exiled and executed priests and bishops by the thousands and confiscated all the property of the Greek Orthodox church, which was the established church of the Tsar government. Besides attempting to destroy religious worship, they gave semi-official backing to the league of the Militant Godless.

It cannot be denied, of course, that the hatred against the church was partly due to its political power and intervention in affairs that do not belong to it. Nevertheless, it is essentially much more that the Communists hate. They hate teachings of Christianity just as the Nazis. In one of their Protoculs we read, “We must extract the very conception of God out of the minds of the Christians. . . . We must destroy all professions of faith. ” Why do the nations rage so furiously together? It is against the Lord and His anointed.

The Russian fury underwent a continual modification it is true. In 1936 the article 124 took effect. Because of these modifications many leading church men took a different stand over against Russia in late years. For that reason we also have many who seek something we have in common with Russia in order to rally support to fight that beast Hitler. It is my conviction that there is absolutely no fundamental difference between Communism and Nazism as far as their attitude towards religion and Christianity is concerned.

What is the religious situation in Russia today ? There is religious worship in churches which are left of the destruction. Foreigners estimate that there are only about 30,000 active congregations still in Russia. But there is absolutely no religious freedom, no right of free propaganda, as there is in our country.

In the Christian Century of October 15 there appeared an article about a movement for Church union in England. The following is a quotation which” explains what is taking place in England.

“While the war has temporarily clogged the worldwide movement toward Christian unity, launched at Oxford and Edinburgh in 1937, it may actually release and facilitate the impulse for the union of churches in a single nation. In England it appears to be working out in this way. There the Free Churches are drawing together under the powerful stimulus inherent in the situation which the war has brought about. A manifesto issued a month ago by some 75 prominent leaders of the Congregational, Methodist, Presbyterian, and Baptist denominations called upon their people to consider the providential opportunity and to explore the possibility of merging their separate bodies in one United Free Church.”

The article explains that the Federal Council of Free Churches has the proposal in hand now. It also gives its comment upon the attempt at Church union as such. In the main the gist of the writer’s arguments for Church union are: 1. Differences between churches are insubstantial and trivial. 2. Union will help churches confront difficulties. For divided and obscured testimony will hinder establishment of the new Christendom after the war. Disunion has a bad effect upon mission work in foreign lands. And problems of reconstitution can better be faced Unitedly.

There can be no question about the desirability and the necessity of Church unity. Because the true Church, the body of Christ, is one, it must strive for unity. The Church must manifest the command of Christ to love one another. This love of one another is based upon the love of God which has been spread abroad in our hearts. If we love God we will love one another.

Such reasons do not appear in any discussion of the present movement for Church union. The reasons are always utilitarian. The Churches seek power and safety in these times in union. It is the idea of man always to protect himself. It is not considered whether the union of the church is based upon the love of God and His truth. It should be the attempt of the Church to fulfill her calling to speak God’s Word. If it causes strife and hatred and disunion that must not deter the Church from speaking the truth.

The writer of the article ignores fundamental differences that have caused the divisions in churches. He calls them insubstantial and trivial. Because the true church represented by the people of God in its history has fought for the truth of God’s Word in all its purity it has suffered from the hands of the false church, which oftentimes was in the majority and therefore deposed the minority from its communion. The process of departure from the truth did not always appear in its final stage. For that reason we have the many almost innumerable divisions in churches. Sometimes because of reluctance to go the way of the consequence of their first departure there remained a certain conservative group in the group that first departed. A more liberal group arises and again causes a rumpus and another division results. Large groups probably remain who have finally reached the stage of complete departure from the truth. It only speaks a social gospel of man and for man. Probably if we look at the history in that way we can agree with the writer, however, when he summarizes the differences as trivial and insubstantial. Probably in none of those groups mentioned is there that love for the truth and a walk in the way of their own confession handed down from their ancestors. It is evident that the writer is a modernist who ignores the guidance of the Spirit in the church in the past, and the essence of Christianity because he speaks of the “New Christendom.”

Ever since the country was being geared for the “defense of democracy” and became “the arsenal for the democracies” it has enjoyed the feeling of the lack of sufficient labor instead of the oversupply of man power. Along with the rise in “prosperity” came the labor trouble. In the aircraft industries, in the shipyards, in key defense industries, major strikes were called by labor leaders. Such a slowing up of production has forced the government to step in and either enforce arbitration or even take over and run the plants. The public also has become indignant with the labor unions and its leaders. Much of the trouble is due to the hatred between the two major and rival unions, the CIO and AFL, who both seek the upper hand in control of labor. The struggle is also for the closed shop. The latest strike of importance was that of the workers of the “Captive” coal mines. John L. Lewis, the leader of the UMW, is the one who is defying President Roosevelt, who asked that work continue at the captive coal mines pending settlement of the dispute. In the Newsweek John L. Lewis is described as “a hardheaded survivor of two decades of bitter and bloody battles within his own union.” It is also stated that he was unabashed when President Wilson in 1919 called a threatened coal walkout “unjustifiable” and “unlawful” and 400,000 men quit the coal pits on Nov. 1 of that Year. In the Daily News of Los Angeles, the editor says, after giving a history of Lewis’ activity in the past decades, “By this time, however, it had become apparent that Lewis’ chief interest was the welfare of Lewis.” The differences are now not at all about wages and hours but about the closed shop and control.

It is plain that the unions and their leaders are just as this leader, concerned about their own control and power irrespective of the interests of others, When they strike for the closed shop it ought to become plain to us that we are absolutely in the wrong to be a member of such an organization which uses such force, a strike, to gain its objective by force, the closed shop. 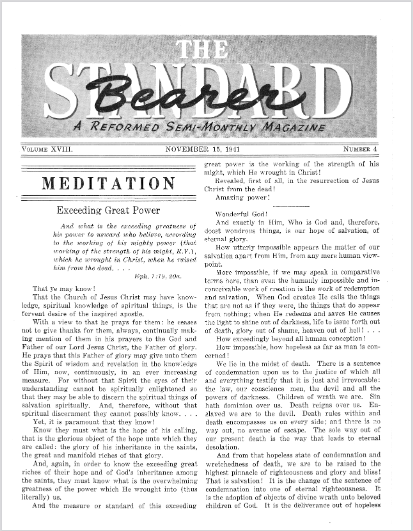