Rev. Hanko is pastor of the Protestant Reformed Church of Lynden, Washington. Previous article in this series: December 1, 2006, p. 103.

3. And he shall sit as a refiner and purifier of silver: and he shall purify the sons of Levi, and purge them as gold and silver, that they may offer unto the LORD an offering in righteousness.

Here Malachi speaks in further detail of Christ’s work as Savior under the figure of a refiner of gold and silver, but adds something about the ultimate purpose of His work as refiner and shows that it will be “the sons of Levi” who are purified by Him.

Who are these sons of Levi? In the Old Testament, of course, they were the Aaronitic priesthood and the rest of the tribe of Levi, including the temple singers, porters, and others who assisted the priests in their work. Even in the Old Testament, however, Malachi did not have them in mind exclusively when he spoke these words, but the whole nation, which was in great need of purifying. He speaks of the priests, therefore, as the leaders and representatives of the people and through them of the whole nation.

But insofar as this looks ahead to the New Testament it is a prophecy of the cleansing of God’s people in every nation, and of the fact that they are all “sons of Levi,” priests and prophets. We have here, then, another allusion to the priesthood of all believers, something of which we have already spoken.

The great result of this purifying of the sons of Levi would be, God says, that His offerings would no longer be polluted and defiled and despised, but an “offering in righteousness” would be brought to Him by these previously disobedient sons of Levi. Whether or not there was a true and complete purifying of the Old Testament priesthood following these prophecies of Malachi, we do not know from the sacred record. Nehemiah and Ezra speak of their efforts in this direction, but there is no indication of the extent to which these efforts were successful (cf. Ezra 10:18-24 and Neh. 13:1-31). In the New Testament they are successful in that God’s people are, by grace, a “holy priesthood, to offer up spiritual sacrifices, acceptable to God by Jesus Christ” (I Pet. 2:5).

Of those sacrifices we have already spoken. They are not offerings of beasts to be slain and burnt, but the sacrifice of ourselves to God in worship and holy obedience, a sacrifice that is designed to “show forth the praises of him who hath called you out of darkness into his marvelous light” (I Pet. 2:9). This sacrifice is offered in the offering of the heart to God, but also of the lips, the hands, and the mind in His service and in thankfulness to Him.

4. Then shall the offering of Judah and Jerusalem be pleasant unto the LORD, as in the days of old, and as in former years.

That the offering brought to God by a cleansed and renewed priesthood is acceptable to Him the prophet now states more plainly, speaking of God’s delight in their offerings. He would delight in them, Malachi says, as in the days of old and as in former years, referring both to the early history of the nation, when the priesthood and sacrifices were first instituted, and to more recent times, those immediately following the return to Canaan, when the offerings of the people were brought with a willing heart and without hypocrisy.

That their offerings were and would be pleasant to Him does not mean that there is anything of value in the blood of calves and goats, but that the sacrifices of the people would be offered in obedience to God and not carelessly as before, and that they would be offered in faith, looking to the coming of Christ as the one who fulfilled all sacrifices by the offering of His own body on the tree of the cross. This the people had not done, but would by the grace of God do once again.

We bring that same pleasing offering in the truest sense of the word, no longer bringing the types and shadows of Christ at all, but through Him offering ourselves to God. We do that not as an atonement for sin, for atonement has been made and no other atoning sacrifice may now be offered, but we do it in grateful acknowledgment of that perfect sacrifice of Christ.

Though Christ will come and purify the sons of Levi, His work is limited in its extent. Not all will be purified by Him, but only those who have been given to Him by God. The rest will perish through the judgment that He brings. Indeed, He Himself will be the dividing line between those who are purified and those who perish. It is in Him and through Him that God comes as a swift witness against the sinners mentioned in this verse.

That He comes as a swift witness refers to the fact that He always comes quickly. That may not have seemed to be true in the days following Malachi’s prophecy, when four hundred years of spiritual darkness came to separate Malachi’s prophecy from its fulfillment. It does not always seem so now, as we wait through the ages of the New Testament for Christ’s return. Nevertheless, He comes quickly.

He comes quickly, first, because He comes not according to our clocks and reckoning of time, but according to the reckoning of God Himself, to whom a day is as a thousand years and a thousand years as a day. He also comes quickly in that He does not delay a moment beyond the fulfillment of all that God has planned—He comes as soon as He can. He also comes quickly in that when the time is ripe He appears suddenly and without warning, to the joy of His people and the terror of His enemies.

The sins that He judges are sins not previously mentioned in the book of Malachi, but Malachi shows here that the wickedness of the people was not just in a few matters, but was very widespread, as it always is. Though his main concerns, since he is speaking of covenant unfaithfulness, were the corrupting of the sacrifices and the matter of marriage, he does not overlook the fact that the people were guilty of many other sins.

Nor are these sins uncommon today in the church. There are many who dabble in the occult, in fortune-telling, astrology, and demonology, the sins that Malachi is speaking of when he mentions sorcerers. Indeed, many who practice what they call “spiritual warfare,” exorcism and healing, are dealing in an unbiblical way with things that are dangerous and wicked.

The sin of adultery is committed not only in divorcing and remarrying, but in the co-habiting of those who are not married, in fornicating, in homosexual behavior, and today in the widespread use of pornography. Today, as then, these sins often have the tacit if not the open approval of the leaders of the church, just as they did in the days of Malachi.

False swearers are not only those who lie under oath but all those who do not keep their pledged word—those whose word cannot be trusted in business or in the church, whether they are officebearers who do not keep the promises they made when ordained to office, or members who have a reputation for untruth and for dishonesty. God hates such sins because He is the Truth.

Those who oppress and steal from the hireling, the widow, the orphans, and the strangers are not only found in society at large, but are those “Christian” employers who do not pay their employees a decent wage, those who take advantage of others, especially when those they cheat are easy prey because they do not speak the language or know the customs of the country to which they have come. They are the televangelists who use every opportunity to enrich themselves with the pennies of the widows, who even claim revelations from God in order to bilk the people.

Such are as common today as they were in the days of Malachi, and the Word of God through Malachi makes it clear that God hates all such sins as well as those that are still socially unacceptable, robbery, murder, perjury, and such like.

The fear of which Malachi speaks is that holy fear and reverence of God that is the true source of obedience. It cares to please God more than it cares to please men, because it knows how great He is. It counts God’s favor of more value than all the pleasures and treasures of this world. It knows that life with Him is the only guarantee of blessing and prosperity, for it knows Him as the LORD of hosts, and it knows too that the only prosperity that matters is spiritual and heavenly.

6. For I am the LORD, I change not; therefore ye sons of Jacob are not consumed.

God concludes this part of the prophecy with a reminder of His own immutability (unchangeableness). This may seem out of place at first, but most certainly it is not. It is important both for those who stand in jeopardy before God’s judgments and for those to whom He promises salvation through the coming of Christ to know that He is unchangeable.

Those who continue to live wickedly and who show no fear of His judgments must know that He is unchangeable, especially because His judgments do not always come immediately. When they do not see those judgments, then they begin to think that God is not going to judge them at all and they become hardened in their rebellion and disobedience.

Those to whom God promises salvation, the true sons of Jacob, must also know that He does not change, because the revelation of their salvation does not always come immediately either. The believing Jews in these last days of the Old Testament had to wait another four hundred years for the fulfillment of God’s word, and we too, who have seen the beginning of that fulfillment, are still waiting for its completion. In the face of those who doubt, we must know that “the Lord is not slack concerning his promise, as some men count slackness” (II Pet. 3:9), and that “the day of the Lord will come” (II Pet. 3:10).

They must know His unchangeableness also as the great God of their salvation. They deserve to be consumed, for they are in themselves no different from the ungodly among whom they live. They also are guilty of the sins mentioned in the previous verse. But they are not consumed, because God is unchangeable. He is unchangeable as the God of election who has chosen His people as His own from eternity and whose eternal love for them cannot fail. He reveals His unchangeableness in the sending of the Messenger of the covenant when He does not allow the sins of His people to separate them from Himself, but redeems and delivers them by His Messenger. He shows His unchangeableness in giving them His Spirit and causing the gospel to be preached to them, so that through faith the righteousness of Christ becomes theirs and they stand justified before Him.

Though Israel and Judah thought that God had changed because they were not enjoying His promised blessings, it was not He but they who had changed and departed from Him. Nevertheless, He would save from among them the remnant according to election, whom He had eternally loved and whom He would not cast away. He would save them for the glory of His own name and to show that He is Jehovah, the God of the covenant, the one who does not change. That He did do, and He continues to do the same today in His unchanging faithfulness. 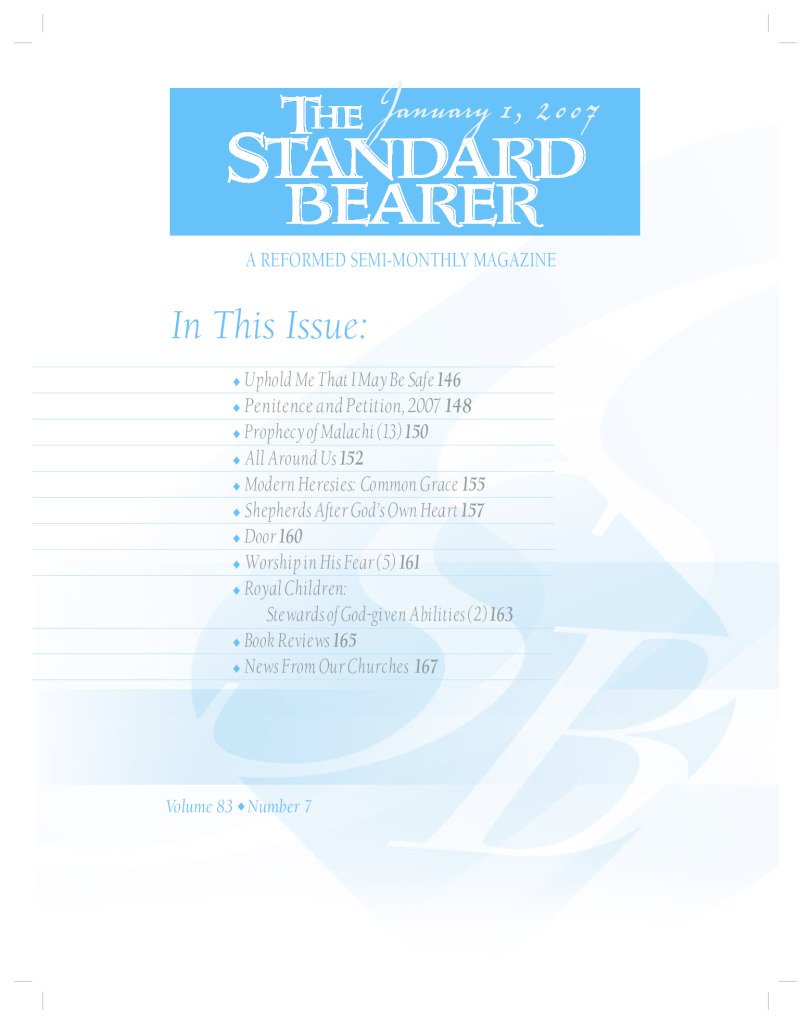