A reader from New Zealand, after expressing his appreciation for the Standard Bearer, writes:

“I was puzzled about a sentence in your article (S.B., p. 447) where you and the Prot. Ref. Churches object to the saying, ‘God promises to every one of you, that if you believe you shall be saved.’ You state that this militates against the plain teachings of Scripture. Rom. 10:9, however, does say the same thing. In essence I see no difference in the meaning of these two statements. . . . Peter ends Acts 2:39 ‘. . . as many as the Lord our God shall call.’ But we do not know who are called. . . . Is it wrong to speak of covenant breakers? Was not Adam a covenant breaker?”

This writer included in his letter copies of articles written by H.J. Jager of Kampen written in the periodical Opbouw. This writer is a member of the Nederlandse Gereformeerde Kerk, an offshoot of the Gereformeerde Kerken onderhoudende article 31, DKO (the Liberated Churches). He does not include these articles to express agreement with them, but rather to show how this branch of the Liberated Churches has become thoroughly Arminian. The writer refers to John 3:16 as expressing God’s love for and desire to save all men, for, as he says, anybody can put his name there instead of the term “the world.” He speaks of losing one’s faith and falling from grace. This is exactly the error that is so strongly opposed and condemned in our Canons.

The question in the mind of the reader centers about the ‘if’ clause in the statement “God promises to every one of you, if you believe you shall be saved,” and the ‘if’ clause in Romans 10:8, 9, “But what saith it (the Scripture)? The word is nigh thee, even in thy mouth, and in thy heart: that is, the word of faith, which we preach; that if thou shalt confess with thy mouth the Lord Jesus and shalt believe in thine heart that God hath raised him from the dead, thou shalt be saved.”

If we place the two statements next to each other the difference becomes obvious:

In the first statement there is a general promise proclaimed to “every one of you,” that is, to all who hear the preaching of the Word. This general promise depends on man for its fulfillment: “if you believe.” You must believe to make God’s promise a reality. That denies the fundamental truth that God’s promises are always “yea” and “amen” in Him. That also makes our salvation dependent on us.

The second statement is addressed to believers. Verse 8 says, “The word is nigh thee, even in thy mouth, and in thy heart.” To them God gives theparticular promise, “if (in the sense of when) you confess with your mouth the Lord Jesus and believe in Him in your heart, you shall be saved.” This is a general proclamation of God’s promise, which is always particular, addressed to the elect. In this case, nothing depends on man, it is all God’s gift (Ephesians 2:8, 9).

This was true already in the old dispensation. Distinction is always made between the carnal seed of Abraham and the true spiritual seed, between those who were merely externally in the covenant and those who were actually internally, spiritually in the covenant. In Romans 2:28, 29 the apostle Paul writes, “For he is not a Jew, which is one outwardly; neither is that circumcision, which is outward in the flesh: But he is a Jew, which is one inwardly; and circumcision is that of the heart, in the spirit, and not in the letter; whose praise is not of men, but of God.” In Romans 4:11, Abraham is referred to as the father of believers, both in the old and new dispensation. See verses 16, 17. InRomans 9:6-8 we are told that “They which are the children of the flesh, these are not the children of God: but the children of the promise are counted for the seed.” It is exactly for that reason that Paul tells the Galatians, “Now to Abraham and his seed were the promises made. He saith not, And to seeds, as of many; but asof one, And to thy seed, which is Christ” (Galatians 3:16). From which the apostle concludes in verse 29, “And if ye are Christ’s, then are ye Abraham’s seed, and heirs according to the promise.”

It is exactly from this point of view that the apostles in their epistles could address the various churches as “Called saints” (Rom. 1:7). “To them that are sanctified in Christ Jesus, called saints” (I Cor. 1:2); “the church of God which is in Corinth, with all the saints, which are in Achaia” (II Cor. 1:1, and so forth). Peter addresses the churches as “The strangers scattered abroad, . . . elect according to the foreknowledge of God the Father” (I Pet. 1:1, 2). Or, “them which have obtained like precious faith with us through the righteousness of God and our Savior Jesus Christ” (II Peter 1:1).

Scripture always speaks of the church as an organism, that is, it addresses the elect, the saints which are in Christ Jesus. To them is the promise of the gospel, not as something that they can accept or reject by their personal choice, but which is assured them by the power of the indwelling Spirit of Christ. True, there is a general proclamation of this particular promise to all who hear the Word, so that the carnal element of the church also hears this promise, despises and rejects it in unbelief. Of them Scripture says that they have known the way, but have not walked in it. They prove to be the tares in distinction from the wheat, both of which grow up in the same field.

This same truth applies to the sacrament of Baptism. There are many who receive the outward sign of baptism, but do not have the seal of the Holy Spirit in their hearts. Like carnal Israel they are outwardly in the covenant, that is, they abide for a time in the sphere of the covenant. Although they are regarded as part of the church for a time, they are not actually members of the true church of Christ. This compares with what Paul says in I Corinthians 10:1-5, “Moreover, brethren, I would not have you ignorant, how that all our fathers were under the cloud, and all passed through the sea; and were all baptized unto Moses in the cloud and in the sea; and did all eat the same spiritual meat; and did all drink the same spiritual drink: for they drank of that spiritual Rock that followed them: and that Rock was Christ. But with many of them God was not well pleased: for they were overthrown in the wilderness.” This cannot possibly mean that for a time God was well pleased with them, but that when it became evident that they were not elect, not sanctified in Christ by the Holy Spirit, did not walk in faith, God was no longer pleased with them. God knows the heart. Salvation is of the Lord. He never changes. He who has begun a good work in us will surely finish it. That is our comfort in the preservation of the saints. 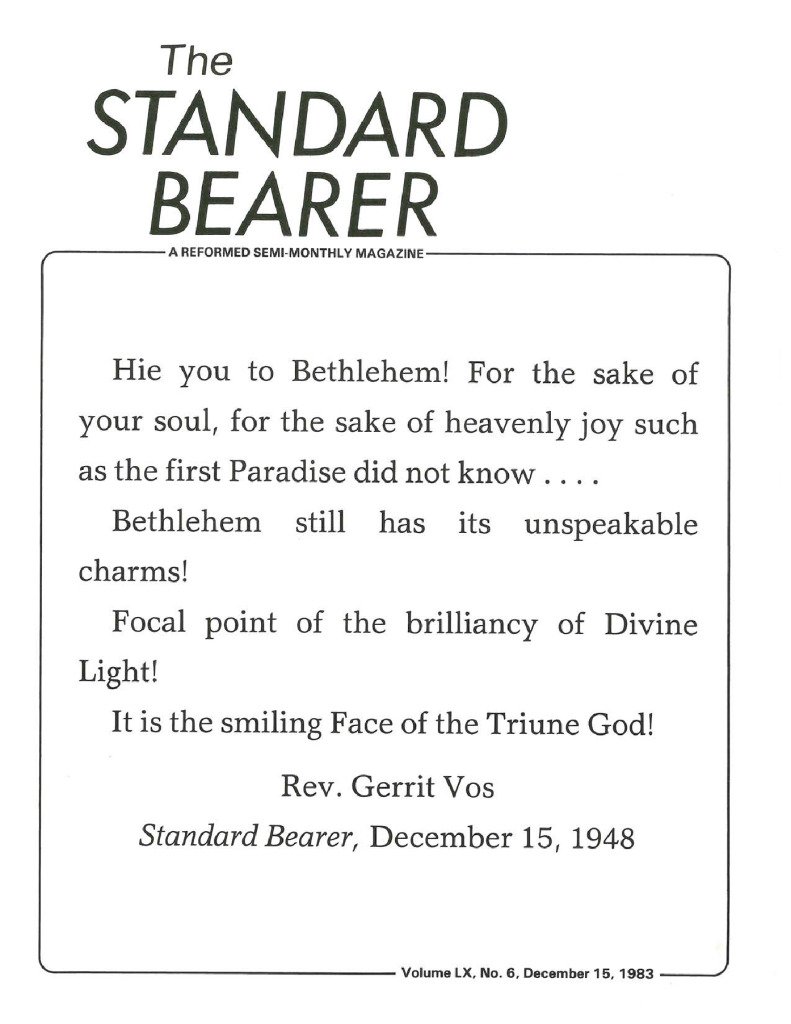