Clarion is the magazine of the Liberated in Canada, officially known as the Canadian Reformed Churches. In the past it has sometimes misrepresented the position of our Protestant Reformed Churches, even as the magazine of the Liberated in the Netherlands, De Reformatie, has done so, especially with respect to our covenant view. But I have seldom seen such a distorted and confused picture of our history and our doctrinal position as appeared in Clarion in the August 10 issue from the pen of the Rev. W. Pouwelse. As I read it, I thought to myself, “Any similarity between this and the Protestant Reformed Churches is strictly coincidental.” While I have little hope, in the light of past experience, that my request will be heeded, I nevertheless want to set the record straight and to request Clarion to make correction, preferably by taking over this editorial.

Editor Pouwelse is writing about the Liberation which took place in the Reformed Churches of the Netherlands (GKN) in 1944, a movement in which the late Dr. K. Schilder played a leading part. This year marks the 40th Anniversary of that event. And quite naturally the Liberated churches in the Netherlands and the Canadian Reformed Churches on this side of the Atlantic are paying attention to this anniversary. In this connection Mr. Pouwelse writes on “Backgrounds of the Liberation,” an article in which he attempts to trace American and Canadian backgrounds as well as Dutch backgrounds. That there were such backgrounds is an undeniable fact; they arose out of the contact between our churches and the Liberated in Canada (prior to the formation of their denomination), and especially out of the history and stance of our churches since 1924. It should not be overlooked, however, that as far as the Canadian Liberated were concerned, the “signals” were called from the Netherlands by such leading lights as the late Dr. Schilder and the late Prof. B. Holwerda and others.

So much by way of introduction.

If the Rev. Pouwelse wants to write about “backgrounds,” however, he should go to the primary sources for this information. I am afraid he has depended too much on the book Inheritance Preserved, by the Rev. W.W.J. Van Oene.

The first distortion appears when Kalamazoo 1924 is referred to. The distortion is twofold. In the preaching Dr. Abraham Kuyper’s theory of presumptive regeneration is discussed at length; and this is important. But then Mr. Pouwelse simply continues: “The theory of Dr. A. Kuyper crept in also in the Christian Reformed Churches in America. In 1924, the Synod of Kalamazoo made a statement, consisting of three points. They are therefore oftentimes called the ‘Three Points of Kalamazoo.’ ” And while later reference is made to “common grace,” this statement in its context leaves the impression that Kalamazoo 1924 is related to Kuyper’s presumptive regeneration, something with which it had nothing whatsoever to do. What is worse, however, is the fact that in citing the Three Points no reference whatsoever is made to “het puntje van het Eerste Punt” (the real point of the First Point), namely, the general, well-meant offer of grace and salvation. And this has everything to do with the difference between the Protestant Reformed and the Liberated. This is true, in the first place, because the spiritual father of the doctrine of the general offer was none other than Prof. W. Heyns, the man who also defined the covenant in terms of a general, conditional promise. It is true, in the second place, because this Prof. Heyns was the very American theologian who was quoted in support of the Liberated covenant view on the front page of one of the first issues of De Reformatie to reach us after World War II.

This leads to the next distortion:

However, in 1950 the Protestant Reformed Churches changed their direction, and again the influence of the theory of Dr. A. Kuyper crept in. This time not in the first place with respect to his “common grace” concept but now more specifically his doctrine about “presumptive regeneration.”

In 1950 the Protestant Reformed Churches drew up the so-called “Declaration of Principles.”

This leads in turn to the worst distortion of the entire article, again evidently partly due to the fact that Mr. Pouwelse depends on the Rev. Van Oene’s book. This is what he writes:

Again we quote a summary of this “Declaration of Principles” from the Rev. Van Oene’s book.

“1. The Protestant Reformed Churches reject the errors of the Three Points of Kalamazoo and maintain that the grace of God is only for the elect.”

“2. They teach that the promise of God is unconditionally only for the elect.”

“3 . They reject the doctrine that the promise of the covenant is for all who were baptized.”

What was the meaning of this “Declaration?” At the one hand they rejected the theory of “common grace.” But at the same time they introduced in points two and three a theory of two kinds of “covenants.” One for the elect and one for “all who are baptized.” They introduced two types of promises. Some “unconditionally” only for the elect and some other (apparently conditionally) for “all baptized.”

I stand amazed! Two kinds of covenants? Two types of promises? An unconditional promise for the elect only and a conditional promise for all who are baptized? What sort of nonsense is that? And how does the Rev. Pouwelse “deduce” this even from the very distorted and partial presentation of the Declaration of Principles by the Rev. Van Oene? Again: I stand amazed! Flabbergasted! I have been teaching Protestant Reformed dogmatics for a good many years, but I never heard this notion before. And I lived through and participated in the entire history of the Declaration of Principles, have -read and discussed and defended that document many times; but I never found the slightest hint of these ideas in it. The Protestant Reformed Churches are violently opposed to any idea of a promise for all and a conditional promise.

Then follows another distortion: the old accusation of presupposed regeneration:

According to these points the sacrament of baptism does not sign and seal the covenant of God and His indubitable promises. The real covenant was only for the elect and people could not do anything else than “presume” and “hope” that the child to be baptized belonged to the elect.

And a little later the writer adds: “In this way the Canadian Reformed Churches were born. There was no choice. The Protestant Reformed Churches had gone back to the doctrine of Dr. Kuyper and had officially accepted the theory of the ‘presumptive regeneration.'”

Now here is a marvelous thing!

According to the Rev. Pouwelse the Protestant Reformed Churches in adopting the Declaration of Principles adopted the Kuyperian theory of presumptive regeneration.

And yet what does that very Declaration say? And now I quote it from pp. 125, 126 of our Church Order:

“III. Seeing then that this is the clear teaching of our confession,

a. That the promise of the covenant is conditional and for all that are baptized.

b. That we may presuppose that all the children that are baptized are regenerated, for we know on the basis of Scripture, as well as in the light of all history and experience, that the contrary is true.”

I can only conclude that the Rev. Pouwelse had never yet read the Declaration of Principles. But then he should not presume to tell his readers what that Declaration teaches. That is not responsible journalism, and it is not honest.

The final distortion is a distortion of historical fact. The Rev. Pouwelse writes:

The only conclusion one can draw from this paragraph is that because of the conflict about the Declaration the Liberated immigrants left us and joined in the formation of the Canadian Reformed Churches. Thereupon all that was left of the PRC joined the Christian Reformed Church. Ergo: from 1960 forward there were no more Protestant Reformed Churches.

But the facts are these:

1. There was indeed a conflict about the Declaration of Principles from 1951 to 1953.

2. It was not the Declaration as such, however, that occasioned the split in our denomination

3. Rather, the Rev. H. De Wolf (and some of the elders of First Church) were disciplined on account of De Wolf’s heretical statements. They then committed schism rather than submit to discipline.

4. Thereupon many throughout the denomination took sides with De Wolf and likewise committed schism.

5. This De Wolf group was doctrinally in agreement with the Liberated in Canada and the Netherlands.

6. For some mysterious reason, however, they did not join forces with those who are now the Canadian Reformed; but they melted away into the Christian Reformed Church.

7. The Protestant Reformed Churches continued to exist, to maintain their historic position, and to the best of my knowledge are alive and well today.

Mr. Pouwelse states near the end of his article, “History can teach us a lesson . . . .”

But first make certain it is history, not distortion. 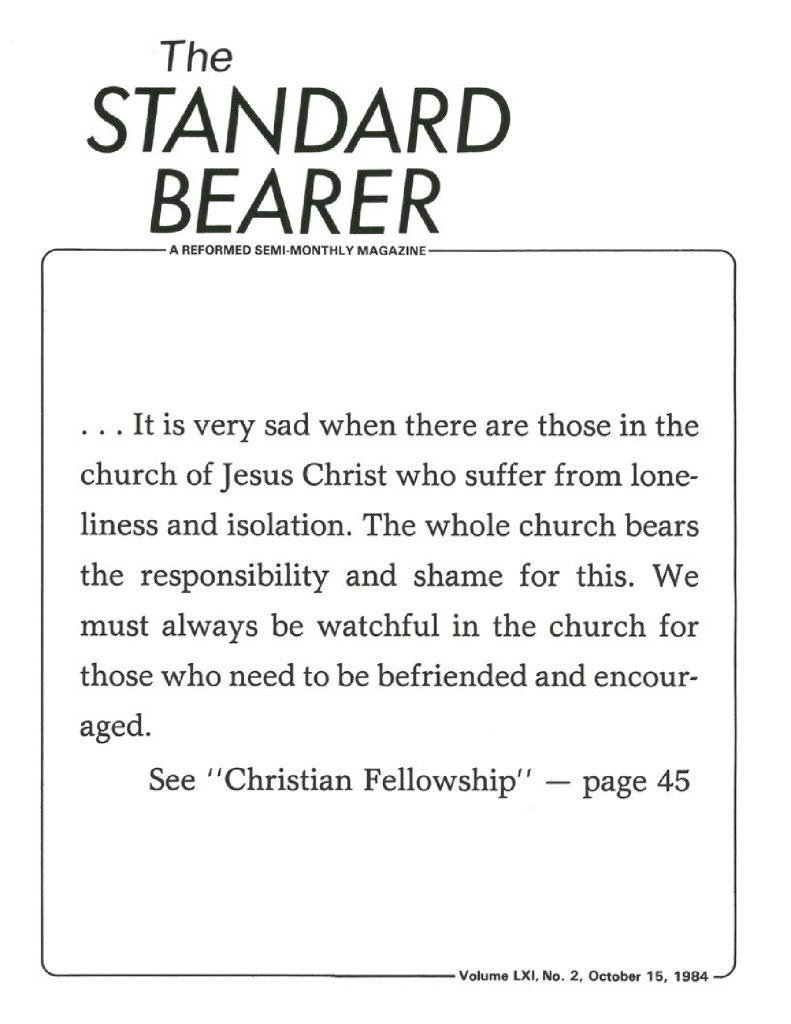