In the last two installments in this series, we first looked at punishment of children and noted that corporal punishment such as spanking is still generally legal. We then looked at the juvenile court system and noted that, due to the different evidentiary standards in juvenile court and the reliance on reports of social workers and others, parents whose views differ from those prosecuting a case of alleged abuse may have a difficult time defending their actions. In this installment, we will look at the effect that changing views in the world around us has on legal proceedings related to our children.

In our last installment, we looked at some observations that Iowa Court of Appeals Justice Sackett had concerning the changing attitudes of the state towards discipline of children, and how the state more and more substitutes its own judgment for that of the parents. This trend is a cause for concern for believing parents. We can see the world rapidly departing from even a pretext of holding to traditional Christian values. Scripture tells us that this will be the case, and that the world will eventually begin to persecute the church as never before. As we noted in the last installment, if a social worker assigned to a case has different views on discipline and on determining right from wrong, that social worker can make it difficult for a parent to maintain or regain custody of their child.

This author had an experience a number of years ago with a case that illustrates the hostility that some in the juvenile court system can have to Christian values.1 While my normal area of practice is in the relatively conservative northwest corner of Iowa, I had a case some time ago where I was approached by a couple who came from a considerable distance away. They indicated that they were searching for a Christian lawyer and had been given my name. They had a daughter who had drug related problems in juvenile court, and they were attempting to gain custody of their grandson.

They explained their story as follows. When their daughter was sixteen, she began using marijuana and was sneaking out to see a boyfriend. The parents tried everything they could think of to discipline their daughter, and finally contacted the state looking for help to assist them. A social worker was assigned to the case, who basically told them that they were too hard on their daughter. She indicated that everyone, even city leaders, smokes marijuana, and that they needed to lighten up. Ultimately, the state did nothing to help change the daughter’s behavior. The daughter became pregnant and married the boyfriend she had been seeing.

The daughter’s drug usage continued and worsened. She had three children, including one from an affair she had while still married to her husband. Due to her drug problems, she again came into contact with the juvenile court, but this time was in danger of losing her children. Her husband also had issues that the state was concerned about. My clients intervened in the court action as grandparents, and sought placement of the children with them.

The state did place the children with the grandparents temporarily. The law requires that the state work to return children to their parents’ care if possible, and the state worked towards returning the children to their father, the daughter’s husband. My clients had concerns about the father’s lifestyle, but realized that since the state seeks to reunite children with their parents, they could do little in that regard. It became apparent that the children could not return to their mother any time soon, so the question arose as to what would happen to the third child who was not a child of the husband. My clients offered to continue to care for the child, but the state sought to place the child up for adoption. They also pressured the daughter’s husband to take the child, even though he felt resentment towards the child and did not want to take him.

The law provides that if a child cannot return to a parent, the state should seek to place him with the nearest relative. Although my clients were the next relatives and had no issues that would prevent placing the child with them, the state agencies and attorneys looked for every other alternative they could imagine. When I finally cornered a social worker and asked point blank why they were not considering my clients, she said it was because they were “too Christian.” She went on to explain that my clients did not want the child to attend public schools, and that they had said they would homeschool him before they sent him to a public school. She explained that my clients did not want the child to attend public school because they did not believe in evolution or things like that, and that they had a lot of other “crazy ideas” like those. She explained that they felt that the reason my clients’ daughter had drug problems was because they were too strict and had such “far out” religious ideas.

When we pressed the issue, the state ordered a psychosocial evaluation for the grandparents. The psychologist that the state selected was also hostile to my clients. For instance, my clients had once moved to a better neighborhood because a man had been murdered in their neighborhood. The psychologist went so far as to imply that my clients must have had something to do with the death. Everything my clients said was twisted to make them appear radical and extreme in their beliefs. The only explanation ever given for the hostility to my clients was the fact that they were “too Christian.”

After a long battle, the judge placed the child with my clients, who have raised him ever since. The striking aspect of the case is that the state was so resistant to placing the child with my clients, not because of a fear of neglect or physical harm to the child, but because my clients believed in doctrines that were traditional. They held those beliefs as absolutes, and refused to back down on their adherence to those beliefs. In a world that more and more rejects traditional Christian values as outdated, and teaches a moral relativism under which no set of beliefs or values is seen to be exclusively correct, those who believe in moral absolutes are seen as “intolerant,” and are singled out. While the case in question involved grandparents, parents could face the same difficulty in a case where those employed by the state are hostile to the parents’ values.

We see the world around us growing more and more hostile to the absolute truths of Scripture, and increasingly accepting all forms of sin. At the same time, we can expect that the world’s tolerance for the true church’s condemnation of sin will also erode. Just as biblical views on punishment were widely accepted a generation ago, but are now viewed with suspicion, our views will increasingly seem out of touch with mainstream thought. Our condemnation of sin will be seen as intolerant in a world filled with moral relativism that allows every man to do what is right in his own eyes.

We can expect that, in addition to the discipline of our children, our instruction of them will also come under attack. The world preaches that everyone must be accepting of everyone else’s “choices,” with “choices” usually being little more than a euphemism for sin. Our teaching that Scripture provides moral absolutes is viewed as antisocial and intolerant. In the future, the world may consider this as grounds for finding that parents are corrupting children and preventing them from being productive members of society.

Consider the following excerpt from the state’s guide to identifying child abuse. Under the section on mental abuse, the guide gives the example of “Corrupting the child by encouraging and reinforcing destructive, antisocial behavior until the child is so impaired in socioemotional development that interaction in normal social environments is not possible.”2 The day may come when a child who refuses to work on the Sabbath day and who opposes homosexuality and fornication has difficulty interacting with society in general. As the definition of what is “normal” changes, so does society’s definition of “normal social environments.” Condemning sin in others may be viewed as “destructive, antisocial behavior.” As society becomes accepting of sin and even promotes sinful behavior, the tenets of traditional Christianity seem more and more unusual, and believers’ condemnation of widely accepted immoral behavior will be seen as antisocial and disruptive in an otherwise “tolerant” society. Biblical discipline of children will be seen as harsh and domineering in a society that teaches children that there is no sin, only “choices.”

As discussed in the second installment in this series, it is easier in many respects to prosecute a case in juvenile court than in criminal court. The key question in juvenile court is “What is in the best interest of the child?” Evidence in the form of reports from social workers is admissible, and the burden of proof is lower. In this context, we can expect that, just as biblical discipline such as corporal punishment is scrutinized, the doctrines we teach our children will soon be scrutinized. In a world that advocates tolerance and denies moral absolutes, our doctrines will increasingly be seen as unacceptable teachings for children. Teaching children that they cannot be friends with those who walk in sin will be seen as teaching antisocial behavior, which would not be in the child’s best interest, that is, in the world’s view. Parents could be accused of making it impossible for their children to function in society, at least to the world’s standards. Our schools may also come under attack as they stand in the place of the parents in reinforcing these teachings. Our teaching and discipline of our children could be used by the state to try to remove them from our care.

As society changes around us, there is nothing we can do to prevent our traditional Christian values from becoming more and more out of step with mainstream society. While our constitutional rights will protect our religious freedoms for a time, eventually our views will become so at odds with society in general that authorities will feel justified in intervening to prevent “harm” to our children. Despite all this, the child of God still has comfort in knowing that all things are in His almighty hand, and that “in all things that may hereafter befall us, we place our firm trust in our faithful God and Father, that nothing shall separate us from His love; since all creatures are so in His hand, that without His will they cannot so much as move” (Heidelberg Catechism, LD 10, Q&A 28).

We are concerned for the future, how we will provide our children with the instruction required by Scripture and our baptism vows in the face of the world’s opposition. We are called to be vigilant and unyielding in carrying out this calling. Yet, we have no reason to fear for our children even though we fear we may not be able to instruct them, or even worse, that they could be taken from us. Our children are covenant children, called by God, and are included in the promise of Christ in John 10:28, “And I give unto them eternal life, and they shall never perish, neither shall any man pluck them out of my hand.”

1 I thank my clients who have given permission to use their story, and actually encouraged me to do so, to warn others about the difficulties facing Christian parents. However, in order to maintain their privacy, I will use as little identifying information as possible when describing the case. 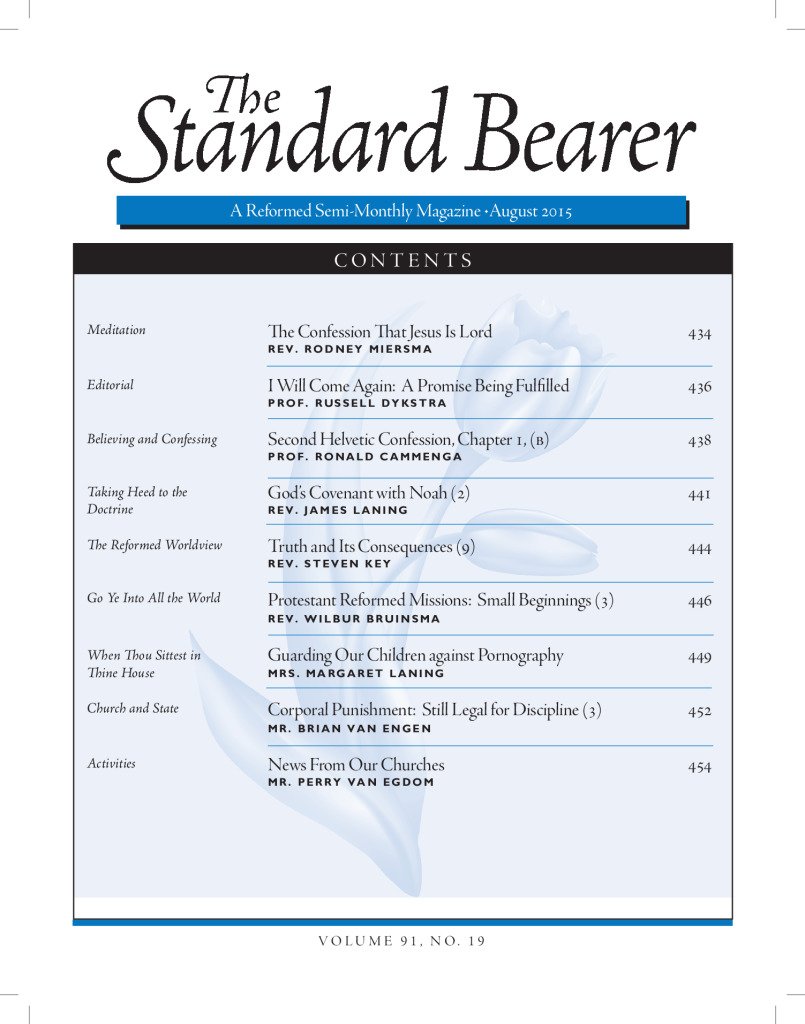